Inferno 2 is a twin-stick shooter from Radiangames, a one man developer from Illinois, which has been around on mobile formats for five years now and is the first game in the series to land on consoles.  Now that might be a cause for concern for you, because who wants to play a mobile game on a home console but this one has the benefit of being very cheap (£3.99) and actually fairly polished.

While it has all the neo-retro, glowy pyrotechnics of a Geometry Wars and absolute screenfuls of bullets, the gameplay on offer here actually harks back further than you’d think.  Thirty/Forty-something gamers may recall how Gauntlet used to be the best known top-down arcade game and that all games that shared any of its traits were immediately called Gauntlet clones. Sure, this one doesn’t have the wizards and warriors setting and it spews out a lot more plasma death than any ’80s arcade machine was capable of, but this is a Gauntlet clone as well. 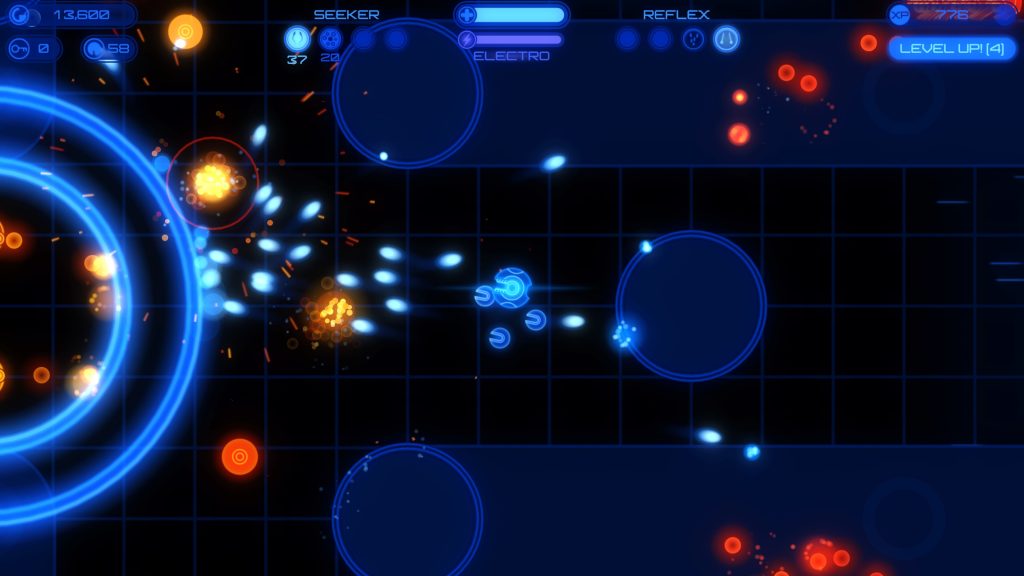 In common with that game, essentially each level here is about getting the key/s and finding the exit while your way is blocked by hordes of enemies and generators that will keep producing bad guys until you destroy them. They produce a lot of them too, with sometimes the flow of enemies seeming equal to the ridiculous flow of bullets at your disposal (kind of like the mech stand off in that rubbish Matrix sequel).   This is what makes the combat feel good. It feels exciting and over the top and is aided by the twin stick controls which are aim to shoot, eschewing the use of a fire button like all the best twin stickers. You also have four main weapon systems and four missile systems. These are switched through using the shoulder buttons.

fires your missiles, switching helpfully between types when you run out of ammo, and

fires off a special power that cools down over time.

All in all, you do get issued with a lot of stopping power and you can even upgrade as you go along, although the enemies tend to get stronger as you do and so in the end you never feel completely overpowered but you do feel rightly equipped.  There’s nothing worse than a shoot ’em up with weedy weapons and that’s definitely not the case here.  You do have a choice of areas to upgrade but we found that sticking to one weapon (the brilliant ‘reflex’ gun) and focusing on stopping power was the best bet. 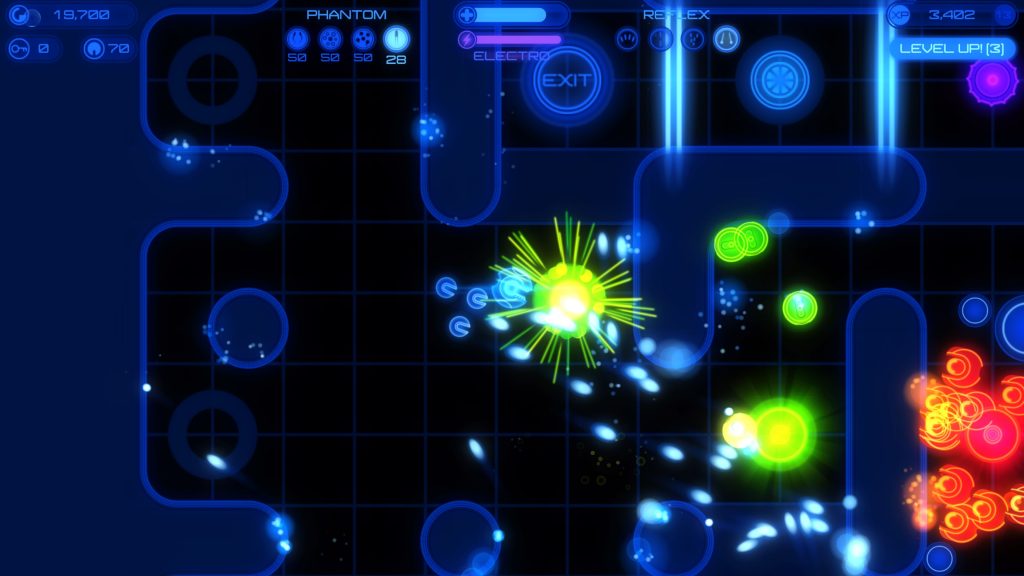 Unfortunately, the game is a little light when it comes to challenge. We had to restart a few levels here and there but for the most part we were an angel of death, ploughing relentlessly through the enemies that dared float towards us.  Newcomers to the genre may find it more taxing than we did and it wasn’t a complete pushover for us, although oddly the game drops the platinum trophy after 40 of the game’s 80 levels, leaving you with less incentive to keep going after that.

Where Inferno 2 lacks is in variation and precision. Each level feels like the same battle being played over and over although they do mix up the goals, sometimes you just need to find an exit, other times you kill a boss, or destroy cores or just survive for a fixed amount of time. 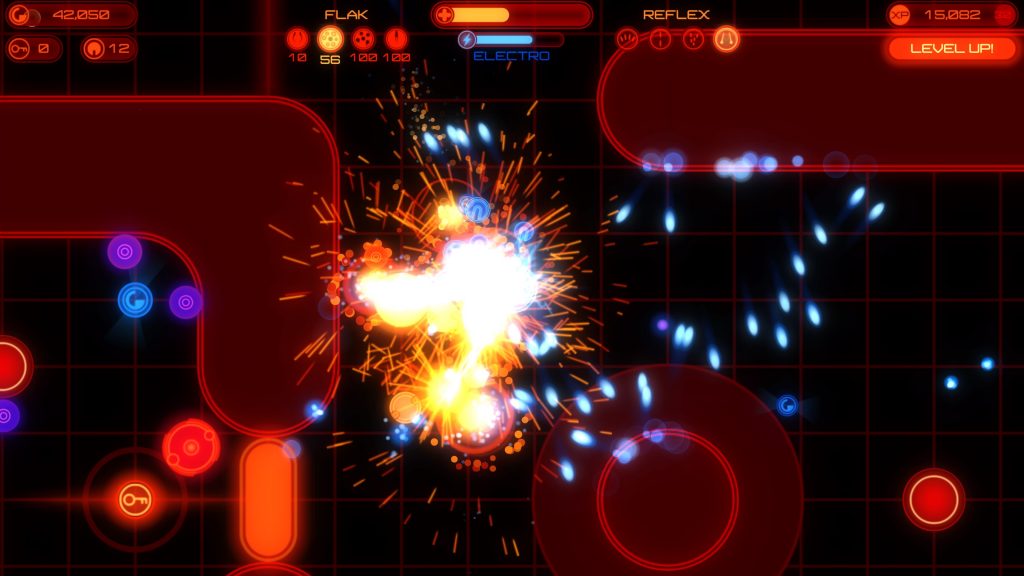 It probably just suffers in comparison to Geometry Wars 3 which had so much variation and was just perfectly designed with each mode offering a deep, significant challenge. But for the cheap price, you do get a really fun, action-packed little shooter here with more than enough levels to qualify as being good value for money.

Visually it’s your usual futuristic, computery geometry and laser effects. We pretty much settled on using and upgrading the reflex gun which bounces shots off of the wall and so before long we were filling the screen up with tons of bullets. We never struggled to read the action though and we prefer having some fireworks to look at rather than anything too classic and staid.  I mean just look at those screenshots, this isn’t Asteroids. 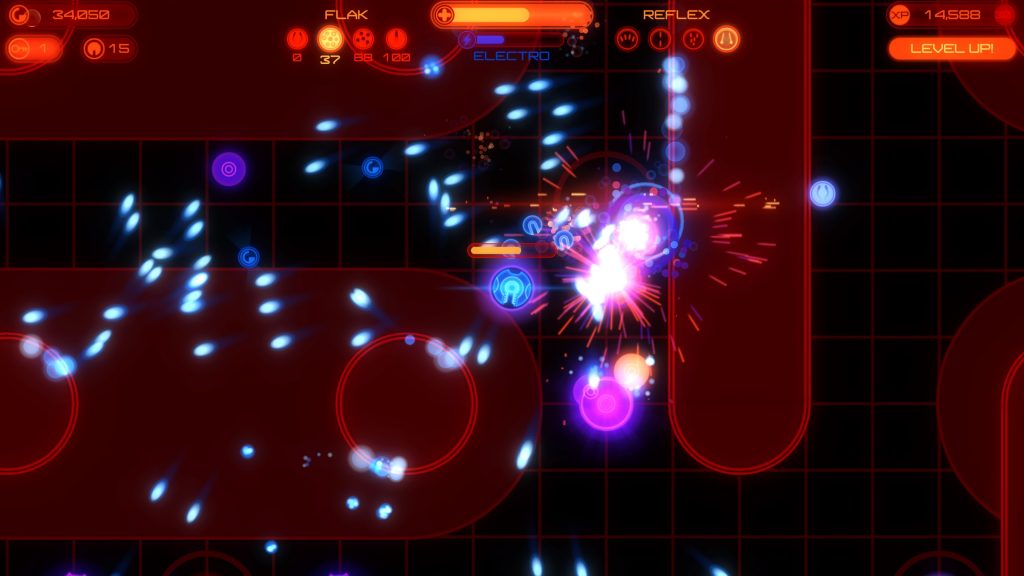 The music is, as you’d expect, just a few generic synth tunes which are a little forgettable. We’d have liked a bit more creativity or intensity in that area but it at least serves its purpose.  The sound effects are your usual blips, pings and crunches.  There’s nothing wrong with the sound design but it doesn’t quite stand up to the quality of the visuals.

Overall, Inferno 2 is definitely a b-tier twin-sticker but one that punches above its weight thanks to the amount of action happening at any given time. As ever, Geometry Wars 3, Resogun and Stardust Ultra all should be higher up on your list of great shoot ’em ups to check out on the PS4 but this is a good option if you’re a fan of the genre and have cleared out the classics first.

Inferno 2
7 Overall
Pros
+ Good controls
+ Decent visuals
+ Lots of action
+ Tries to mix up level goals
Cons
- A bit too easy
- Fairly one note
Summary
Inferno 2 does a good job of taking a mobile gaming favourite and making it feel like a substantial console shooter. It's fun to play and quite exciting but concerns over the lack of difficulty and variety do take the shine off a bit but for this price, we're not complaining.