From developer Entertainment Forge by way of publisher Ratalaika comes dialogue-rich point and click adventure Scheming Through The Zombie Apocalypse: The Beginning. Opening with friends Hank and Larry settling down for a relaxing evening as civilisation burns outside, the Zombie Apocalypse informs their movie choice in terms of Shaun of the Dead or Dawn of the Dead. Never mind that it’s the end of the world. Their plans are only disrupted by the fact the power goes out.

Unusually for a Ratalaika release, this appears to be the first of an episodic series. Perhaps taking up the mantle from Telltale in that respect? Unlike the in-house style of the erstwhile Walking Dead developer, we’re looking at much more of a cartoon fashioned approach here. Mechanically the main interactions happen with you making dialogue choices and affecting actions that take place. 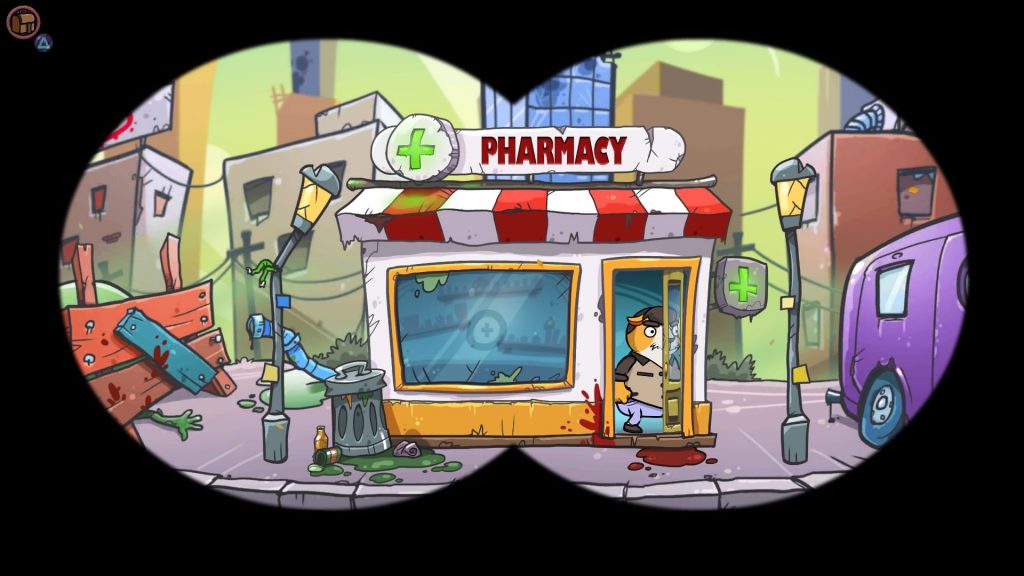 Eventually four months later the indifferent pair run out of food and have to venture outside which is when the main gameplay comes to the fore. You’ll enter a potential looting venue, initially with Larry as your eyes on the ground. The scenario in all cases is Hank is too old and infirm to do the dirty work, instead acting as a lookout from his van with the not-at-all sketchy periscope.

You’ll rummage through one of four stores (in this installment at least) picking up items as you do so. When it’s just the two of you, there’s no split. But when you enlist the help of one of the three NPCs you’ll have to negotiate the share you’ll give them after looting has finished. This is where the Scheming part of the title comes in.  Each item has a value to the scavengers guild and to individuals. The trick is to manipulate this market a little by giving up those items with minimal value to the guild but high street value. 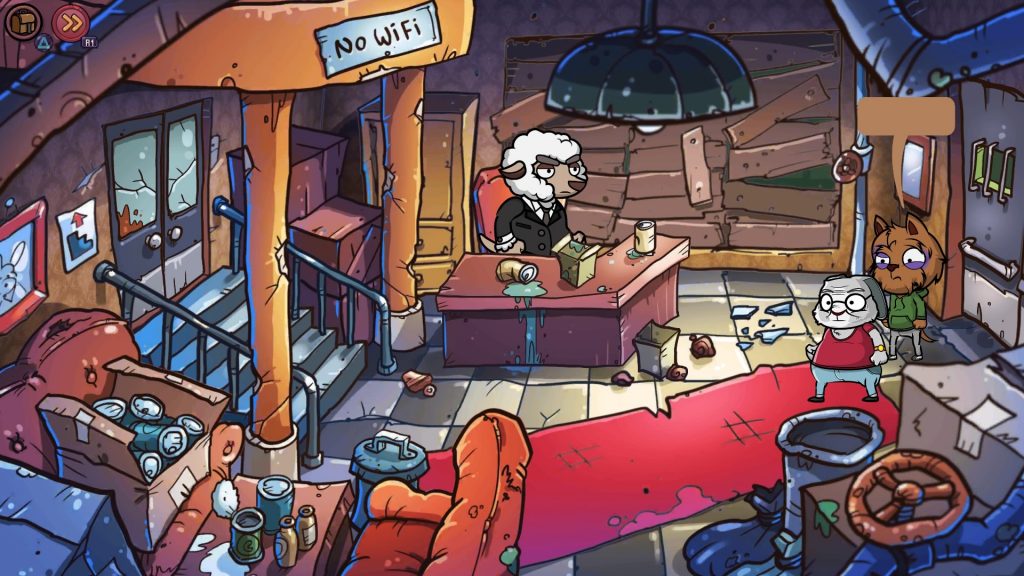 It doesn’t have any particular bearing in this first episode, but we expect your guild points may come into play in subsequent installments. The first store acts as a tutorial of sorts to the mechanic, as well as introducing the main antagonists of the story (a drunken parrot and two sensitive bulls). They take great pleasure in informing you of how selective the entry requirements of the guild are.

Given you’re in the midst of a Zombie Apocalypse there’s the risk of running into an actual zombie as you do so. You’ll not face one directly, but your helpers will do. Regular readers will notice we’ve not mentioned the trophies yet, a very unusual occurrence for a Ratalaika game. Rest assured they’re as straightforward to unlock as you’re used to, just requiring a minimum of two playthroughs.

You’ll inevitably end up killing animals as a result of your actions, to with our final trophy for the platinum was for nailing a complete run with zero fatalities. This meant leaving some loot opportunities behind and more than two playthroughs, put it that way. 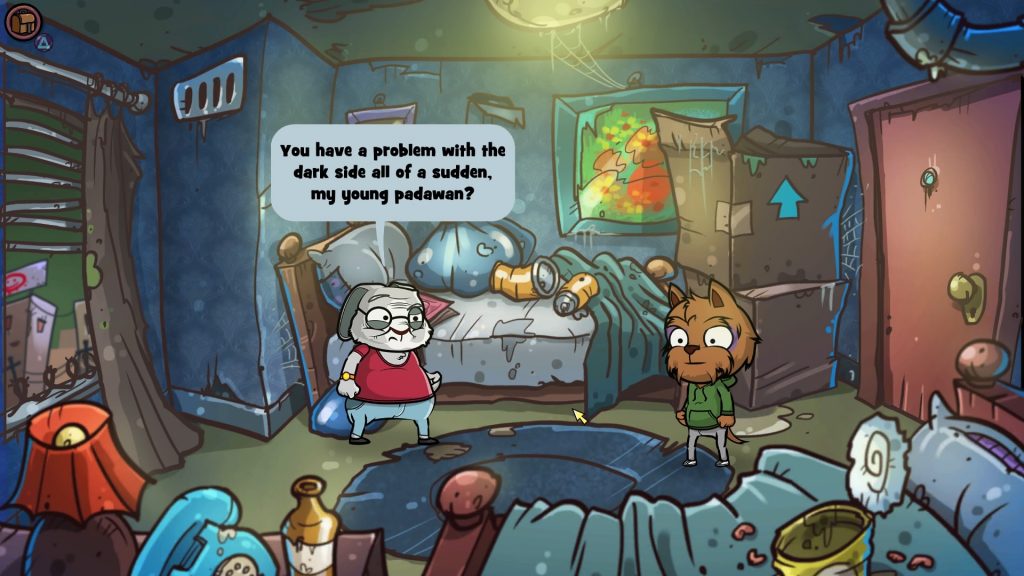 The dialogue is well done here, Larry’s characterisation sounding quite a lot like comedy actor Jay Baruchel to our ears at least. The first playthrough has unskippable dialogue, but that’s no bad thing when it’s as well done as this. There’s a weird thing with regards the speech bubbles though, they pop up when someone talks to denote they’re talking. However, the default setting is no subtitles in speech boxes, so you get these bubbles show up with no text in. It’s a strange design choice, so the first thing you’ll do will be to turn subtitles on.

To expedite affairs when you inevitably come up short of the remaining trophies, you can replay as a new game with the added bonus of fast forwarded dialogue. It only halts when a critical choice is required. The devs realise you’ll have already heard most dialogue on your way through so it’s a nice concession to allow you to speed things along a little. 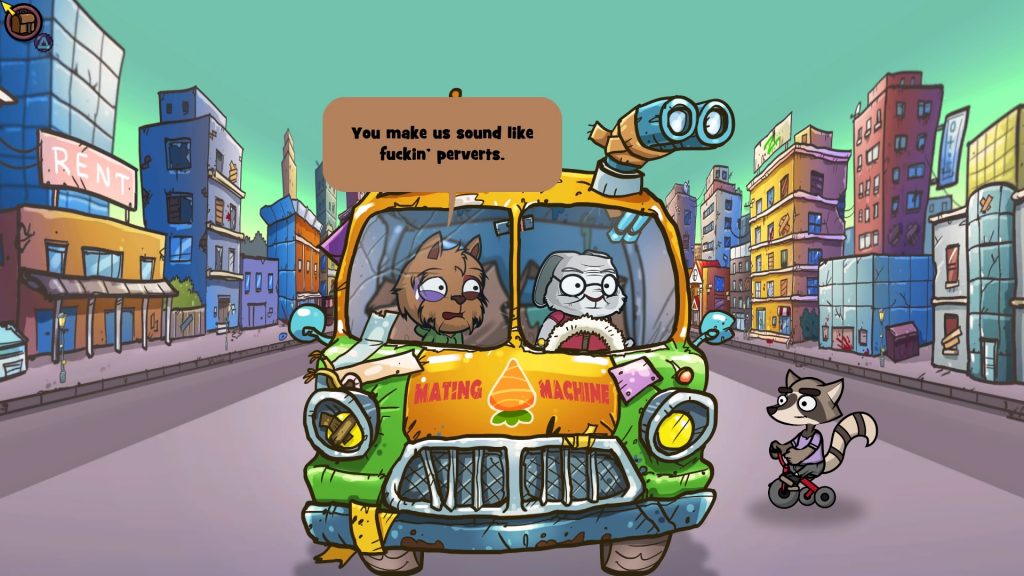 There’s a rudimentary lockpicking minigame but it doesn’t get any more complicated than five tumblers. Along with the loot mechanic there’s not really much on offer here besides some occasionally amusing dialogue. Unlike usual Ratalaika fodder, there’s no Vita port even though from our point of view Sony’s venerable handheld would be just as suitable. Subsequently it’s not like we can add the usual caveat of the value that adds.

All in all then, there’s a slim package on offer from Scheming Through The Zombie Apocalypse: The Beginning, but given this is the first installment we’ll hope there’s more on offer in subsequent episodes. The voice acting and general tone are promising enough we’ll happily play future episodes.

Scheming Through The Zombie Apocalypse: The Beginning
7 Overall
Pros
+ Voice acting is well done
+ Script is generally amusing
+ Your actions have consequences
+ Dialogue skip handy when mopping up remaining trophies

Cons
- Short overall length really
- Minigames feel like a missed opportunity
- Speech bubbles without text is just odd
- No Vita port sadly
Summary
Scheming Through The Zombie Apocalypse: The Beginning is a well voiced animal populated zombie apocalypse with limited gameplay beats. A promising enough intro to an ongoing story anyway. Maybe a little on the short side.