The developers of Hell Pie describe it as an obscene 3D platformer, so you can imagine the vibe they’re going for. It is a platformer with a heavy focus on collectibles, like the N64 games of the past rather than difficult platforming, combat or speed. It certainly has a unique approach, but what of the gameplay? 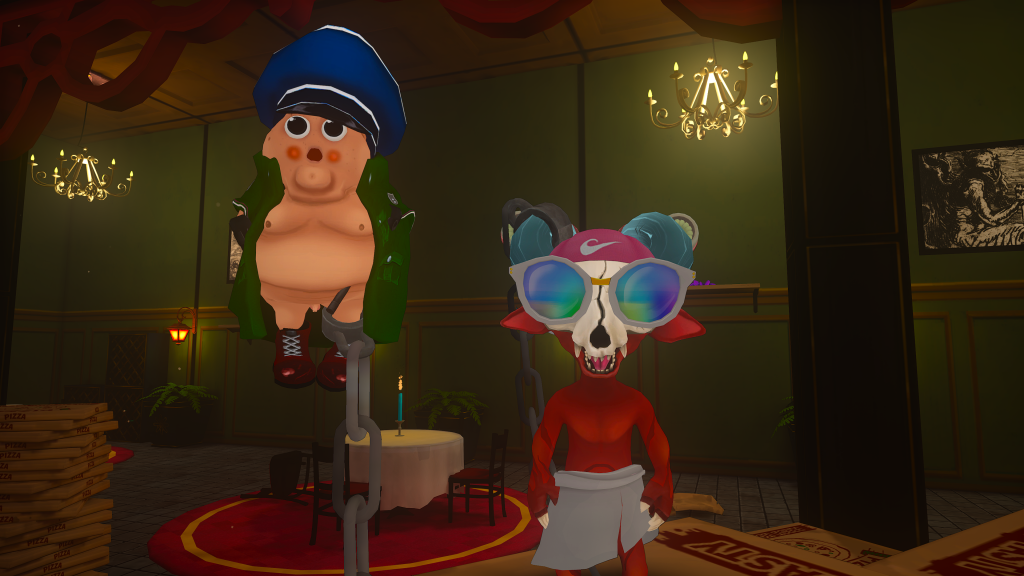 You play as Nate, the Demon of Bad Taste (the eighth, less deadly sin I guess), as he is given the task of collecting ingredients for Satan’s birthday pie. Nugget the cherub accompanies him, chained to Nate at all times as they venture out of Hell and into the real world of beaches, cities and jungles.

Nate is quite nimble from the off, with the ability to double jump, scramble up walls briefly and dash. Nugget enhances these abilities as you can use him to attack enemies and can swing from him to get further height and distance. The swinging is actually one of the highlights of the game, with it really strengthening your movement options and even allowing you to sequence break. If Hell Pie develops a speed running community then swinging will be key I feel. 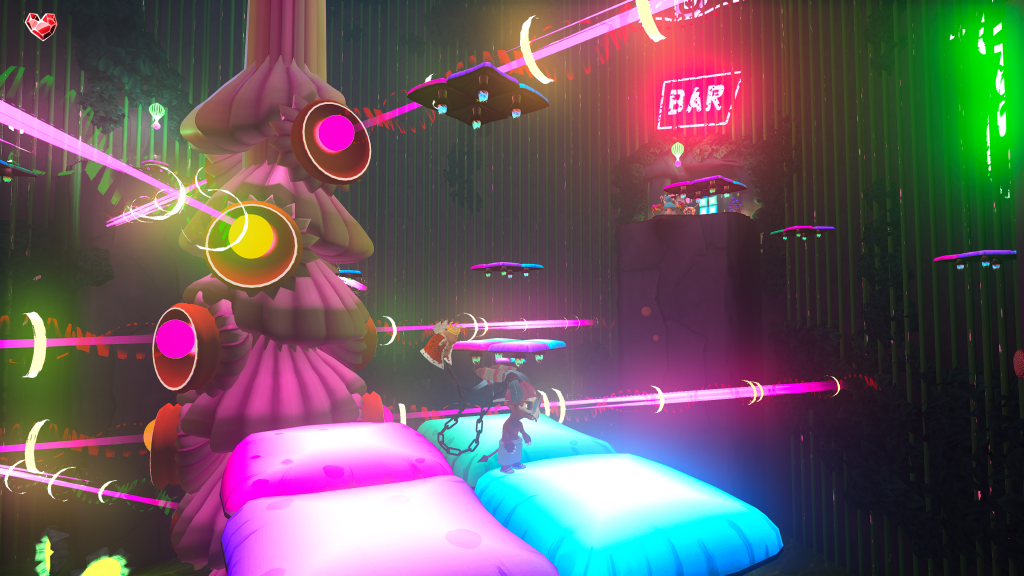 There are five hub worlds to explore with a couple of sub-levels accessible in each. The hub worlds are levels in themselves, with tons of different collectibles to find and plenty of platforming. You can see on the (not too helpful) map where the key areas of the hub are, or you can use Nate’s default horn ability to look around to point yourself in the right direction. Entering a sub-level will take you to a more straightforward, less open level but it too will be filled with collectibles and at the end will have an ingredient for you to collect. Some have rather basic boss fights.

There’s nothing particularly complicated about the levels. There are sporadic enemies, with Nate being able to take three hits by default before dying. There is the odd thorny vine, laser or bit of barbed wire which can hurt you also. Beyond that are pits that will kill you instantly, otherwise death isn’t really too much of an issue. If you do die you lose some crystals, a currency for buying new costumes for Nate and Nugget, and return to the last checkpoint you hit but that’s all. The crystals are everywhere and respawn on death or re-entering a level so it’s nothing to worry about. Beyond looking out for collectibles things don’t get too complicated, even with the odd simple puzzle. 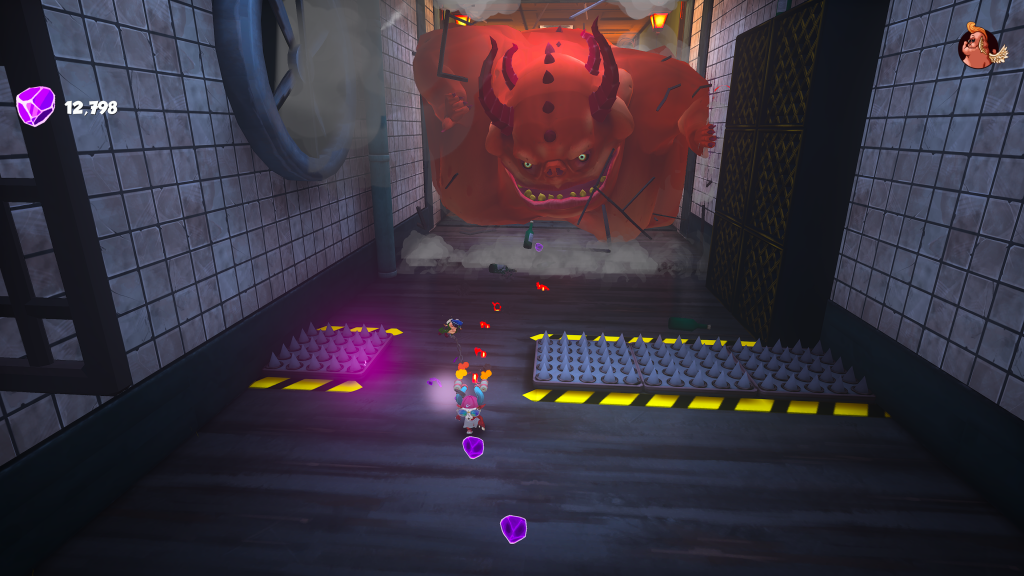 Collectibles aren’t there just for the sake of collecting, each has a practical use as well. The cans of food can be used to access an upgrade tree which gives Nate more health, more swings, or you can make Nugget fart on command. That’s the type of humour you can expect. A cute lamb type creature you collect can be sacrificed to get a new horn power which can give you super speed or allow you to bash things open, for example. Waving cat ornaments can be traded with Greed to access new chambers revealing bonus content. Each level and hub lists the number of each collectible, but that’s all the help you get. You just have to explore and keep your eyes open.

The obscene part of the game comes from its humour. Early on you’ll pass a photocopier and lots of paper with penises drawn on them will fly out. You’ll see flowers or NPCs that are obviously meant to look phallic. There’s lots of penii basically. There’s also scat based humour, gory humour and the odd movie reference thrown in. It’s not particularly clever or even that funny to be honest. Nobody speaks, there’s just speech bubbles which is fine, but Nugget likes to talk as you run around and nothing he says is funny, it repeats constantly and the speech bubble hovers there in a key part of the screen as you’re trying to do stuff. 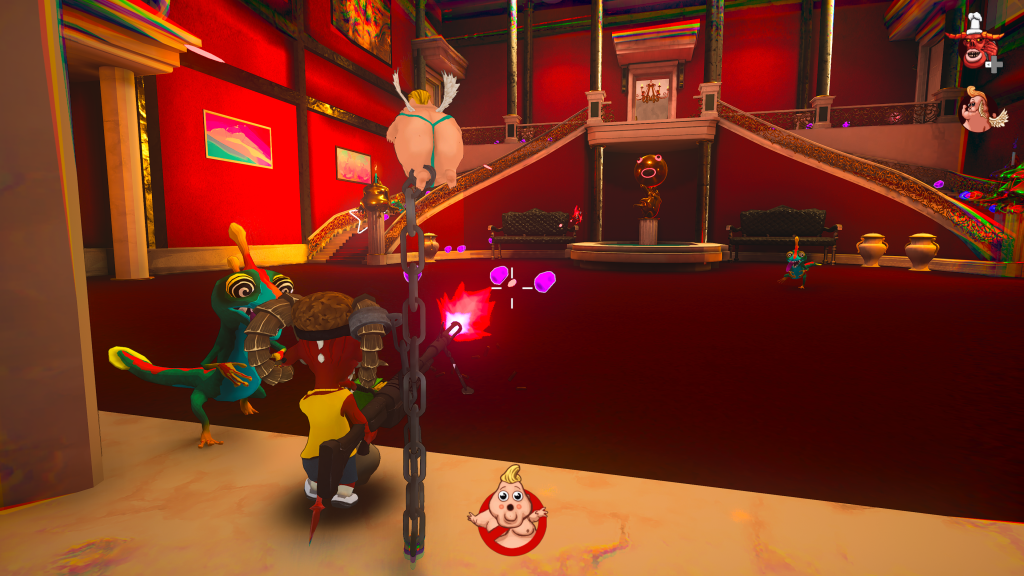 There are a few technical issues like this actually. The camera is generally fine but in a confined space it is terrible, and you’ll have to control it manually more often than not, which I don’t mind, but on the odd occasion it will just reset itself behind Nate, usually mid-jump which can really throw you off. I’ve also fallen through or been stuck in the geometry, though I’ve managed to wriggle free eventually each time. Visually it’s okay, nothing special but it moves at a decent pace. There are hitches every now and then which are really off putting and shouldn’t be happening with the complexity of what’s on screen. There’s also a bug where enemy animations update at a very low framerate after respawning.

Otherwise it’s pretty well put together. Saying that however I would say that I was never really massively entertained whilst playing Hell Pie. Having a level filled with collectibles will convince some people to engage with it and get everything but there’s not enough in the levels for it to be considered fun. I’m not a game designer to be able to point out exactly what is missing but it definitely felt like going through the motions to get to the end, with the completionist in me looking for everything because that’s what you do. 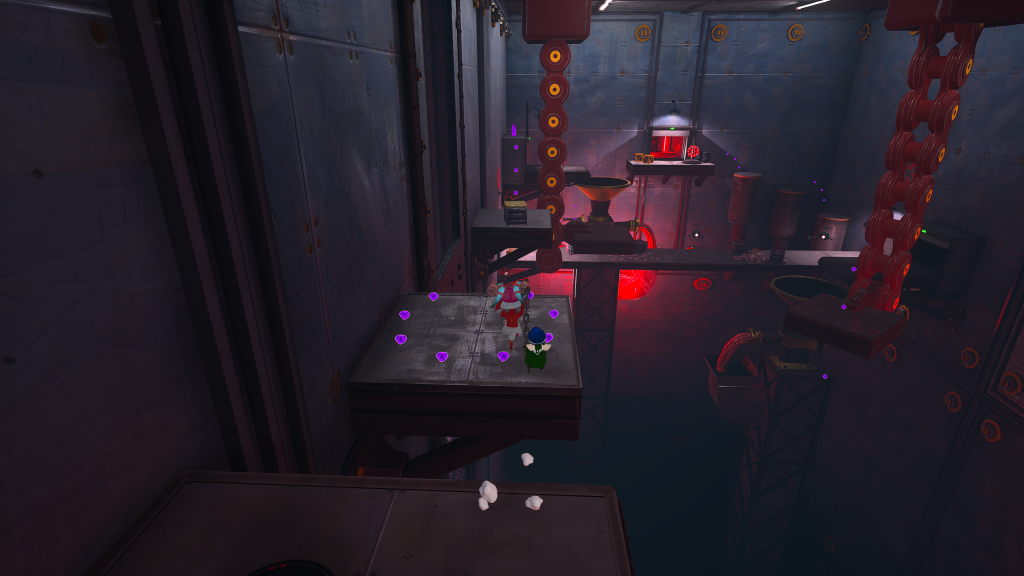 It took me about 13 hours to complete with 97% completion. I’d like there to be a bonus power or something which will make it easier to find all the collectibles because all that’s left now is to scour levels I’ve already been through to find one or two collectibles, and I was pretty thorough the first time. Something in game to point me in the right direction would be appreciated and take some of the chore out of hunting down the rest.

Hell Pie is an odd one. The ingredients are there for a decent platformer but it doesn’t quite do enough to be classed as fun. A certain group will definitely get something from searching the levels for all the items and some may even get something from the humour. I’ve got no problem with crass humour but it’s too simple, you can be crass and clever and Hell Pie takes the easy route. It’s not a bad game at all, it’s just, despite all its posturing, a largely forgettable one.

Hell Pie
6 Overall
Pros
+ Swinging mechanics are fun
+ Lots of useful collectibles to find
+ Decent amount of levels with visual variety
Cons
- More busy work than actually fun
- Some technical issues
- Humour isn't my cup of tea
Summary
Hell Pie offers 3D platforming in some obscene packaging. There are lots of objects to find and collect in the rather large levels but it ultimately feels like busy work, rather than a fun time.