With the democratising of games development, it’s nice to see more solo developers get off the ground. Wreck Tangle Games is a one-person studio that’s looking to mix bedtime stories with horror. The result is Quintus and the Absent Truth, a visually appealing title that does somewhat suffer from a person being over-stretched. 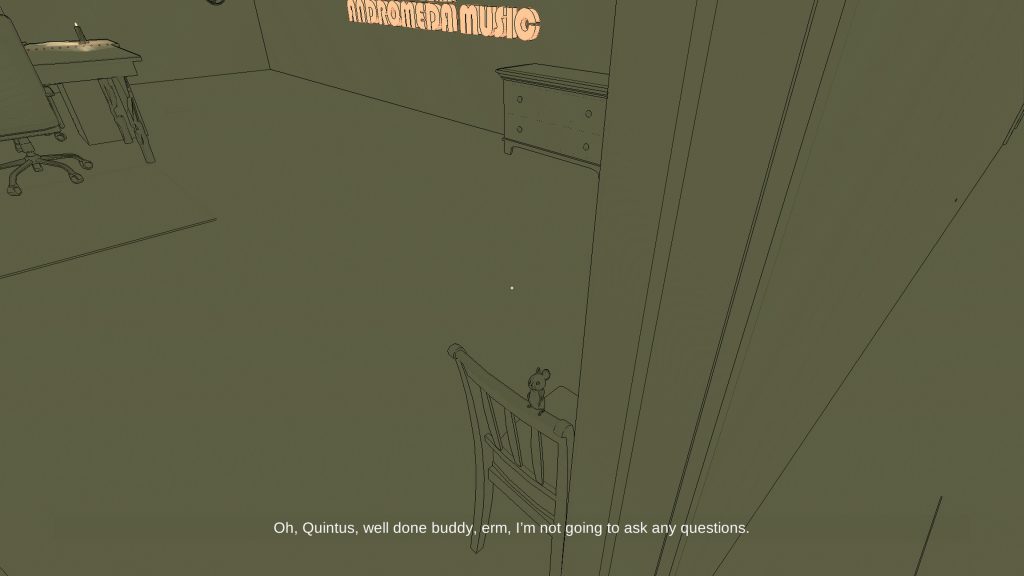 The narrative of Quintus and the Absent Truth is one that’s often told. Alan Shaw is an award-winning pianist who has hit a creative wall. His record company is frustrated with the hold-up and has recently made the decision to release him from his contract. His violinist wife is out of the picture but at least he has his daughter Lydia. The game begins on her birthday and, after a short wander around the house, she is kidnapped.

What follows is a story that takes a turn for the weird without really earning it. I don’t wish to spoil it but I did groan when the troubled artist trope was trotted out once again. I can’t really care for Lydia’s disappearance because she’s stolen before I’ve even set eyes on her. There’s no quick chance to bond before Alan has to play hero. There’s a handful of notes that flesh out some of the story but these can be missed. On top of that, there’s just not much story to really uncover. I’m not intrigued or rooting for Alan. It’s not a long game but even with this pacing, the story underwhelms me. 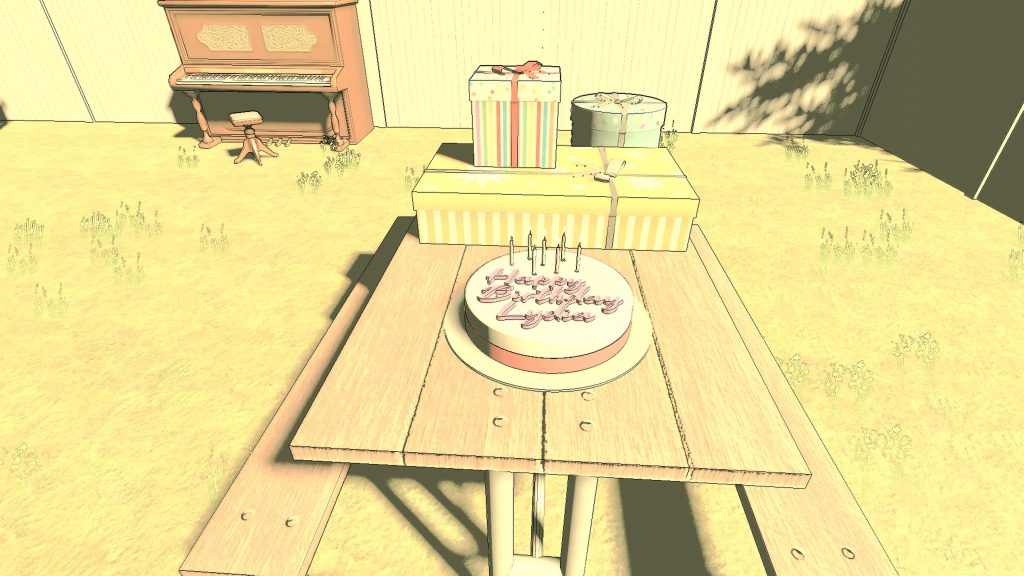 Gameplay resembles more of an adventure game. Alan and Quintus solve some very simple puzzles to progress and, whilst movement can be sped up with a light jog, there’s never any situations where speed is required. On a second playthrough, I did resort to bunny-hopping but there are rare occasions where backtracking

If anything, Quintus has more mobility than his human counterpart. He can fit inside cracks and you’re usually handed control to the titular mouse when the road ahead appears blocked. As such, platforming becomes more prominent in these sections. His diminutive stature does make mundane environments more a challenge to explore. There’s a nice injection of scale and the level design does allow for some interesting exploration.

Quintus does have another trick. He can throw items to either Alan or to distract others. It’s rarely used but it does give you something else to do. Elsewhere, progression is fairly linear and obvious. A few more of these diversions might’ve helped but, as it is, the gameplay requires very little dexterity or brain power from players.

Areas are self-contained which makes looking for puzzle solutions a quick exercise. Indeed, there’s not that much to figure out. Codes are often in plain sight. On the one hand, this really helps with pacing with only one area providing mild disorientation. On the other, I wouldn’t mind having to think once in a while. 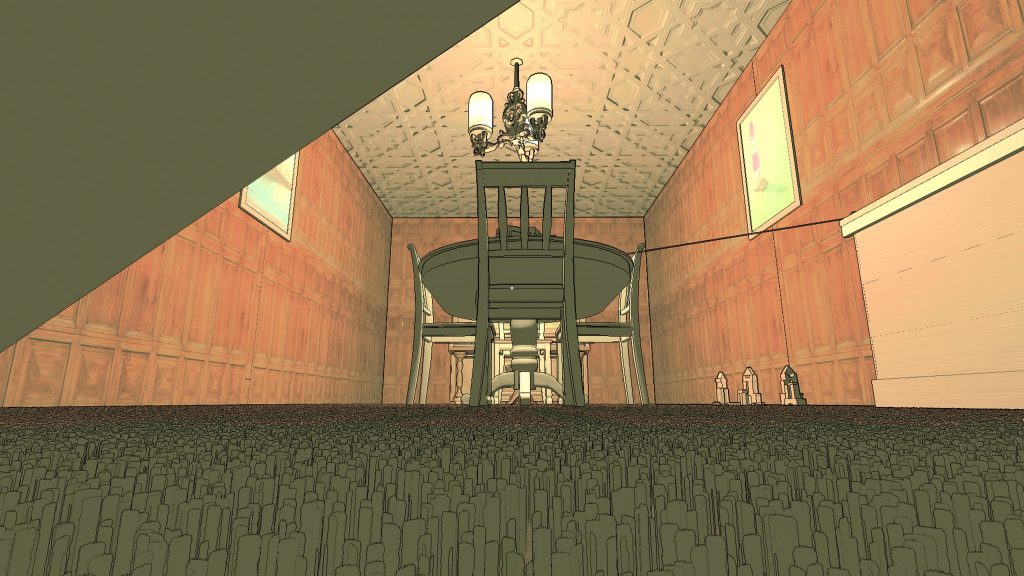 Visually, Quintus and the Absent Truth excels. The muted, unique style gives the environments a hand-drawn quality. The filter really does make everything appear more muted and gives the moments of colour a real chance to catch the eye. It feels unique and gives the game a much needed identity that largely works out.

Technically, there are problems. Transitioning between scenes can create some unsightly judders that justify the epilepsy warning at the game’s outset. Given how well the rest of the visuals fare, it’s a pity to see that lack of polish. The areas of the game carry plenty of detail mostly look lived in. There’s a couple of textures early on that don’t make the grade but, as a package, the look of Quintus and the Absent Truth is a winner. I love how the filter makes edges and lines really pop.

In a game lacking tension, the soundtrack does its best to inject some back into proceedings. I really like the ambience being punctured by ominous piano notes. It’s insidious and sounds nice to steep in. I feel Quintus’ music is a little at odds with the rest of the score. The whole presentation of these sections feels like a bedtime story. It’s appropriate but doesn’t contrast well with the darker segments with Alan. 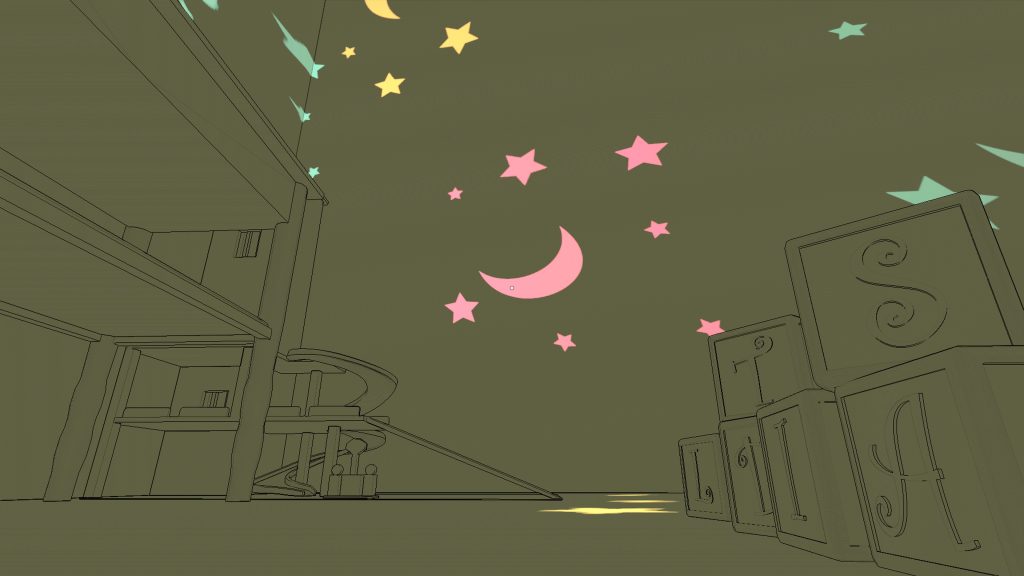 Voice acting suffers from developer, Orion Moon’s limp delivery. He handles most of the male voices and, whilst the budget probably made that easy call, I don’t think he’s up to the task. Alan’s accent wanders and, when emotion’s called for, it half-heartedly arrive. The rest of the cast fares a lot better and it just makes his voices stand out even more. I can’t really forgive it and it does lead to a couple of unintentionally dumb moments.

Despite these problems, there is something to Quintus and the Absent Truth. The aesthetic is really interesting and framing it as a children’s story is something I rarely come across. The soundtrack works well to create some uneasy atmosphere, even if there’s no danger at any point. It’s a pity Orion’s voice acting stumbles and I do wish the plot had more flesh to it. The ideas are good but the execution is very hit or miss.

Quintus and the Absent Truth
6 Overall
Pros
+ Really striking visuals.
+ Atmospheric musical score.
+ Swiftly paced.
+ Quintus's sections are smartly presented with a bedtime story feel.
Cons
- Lacklustre voice acting for Alan Shaw.
- Some technical hitches with the visuals. Not terminal but noticeable.
- The plot did very little for me.
- Some of the horror elements fall flat.
Summary
I'm conflicted about Quintus and the Absent Truth. I think the visuals are really worth seeing but the plot left me cold and there are some weak performances from the voice cast. In contrast, the musical composition works really well and the framing of the Quintus segments fits neatly with the rest of the package. The 'making of' features add a little something extra but the question of value will always hover around a game so short.