Gravity’s a sure-fire fact of life but, in terms of games, mechanics around the force seem to becoming more commonplace. It’s a relatively quick way to reconsider how a level and encounters are designed but not everybody seems to get it right. The latest to attempt it is Brazil’s Studica Solution. Gravity Heroes is a 2D, wave-based platformer that tries to utilise gravity to make their boxy rooms more compelling. Unfortunately, the clever ideas seem undermined by some inconsistent difficulty spikes and a lack of variety. 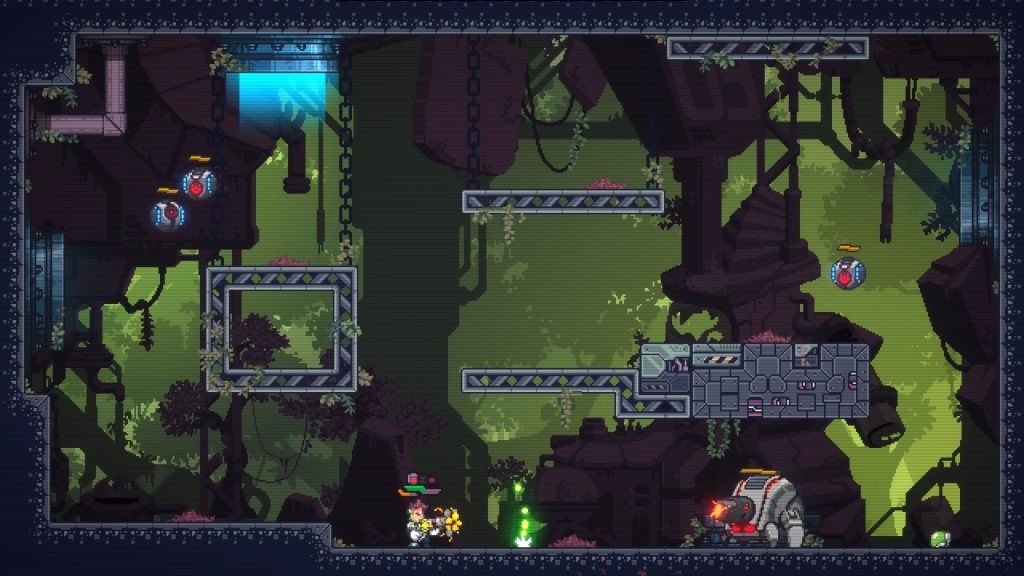 Movement centres around the switching gravity. You have a basic jump and can shoot in one direction but enemies and you can walk on walls at will. To chase foes down you need to change the gravitational pull. It works but I do find switching gravity in a pinch can be a little clumsy. I use the right stick to stick to a wall but it does lead to scenarios where I’m facing the wrong way. There is an alternative control scheme but the ease of flicking the stick often wins out. In a pinch, it’s not always precise.

Gravity Heroes has a short campaign which you can play by yourself or with the assistance of others. There’s five areas with 3 three levels each. The third of these is always a boss fight. The standard levels have you dealing with waves of enemies. These are relatively manageable on your own. During stages, drones will drop upgrades and items that become quite crucial. They do seem to spawn at random, rather than set intervals. Luckily, they do seem to arrive regularly during the main stages.

The upgrades all seem useful and you can hold two at once. The weaponry feels effective but they are time-limited rather than being good for the duration of a stage. I feel like I’ve seen all of them with all of them altering your projectiles in some way. Some add spread, some allow your shots to bounce around the room and, by the looks of it, there aren’t that many modifiers you can unlock. That’s a shame because this game is in need of variety. At least you’re not picking these up automatically and you can tell what’s available to you. 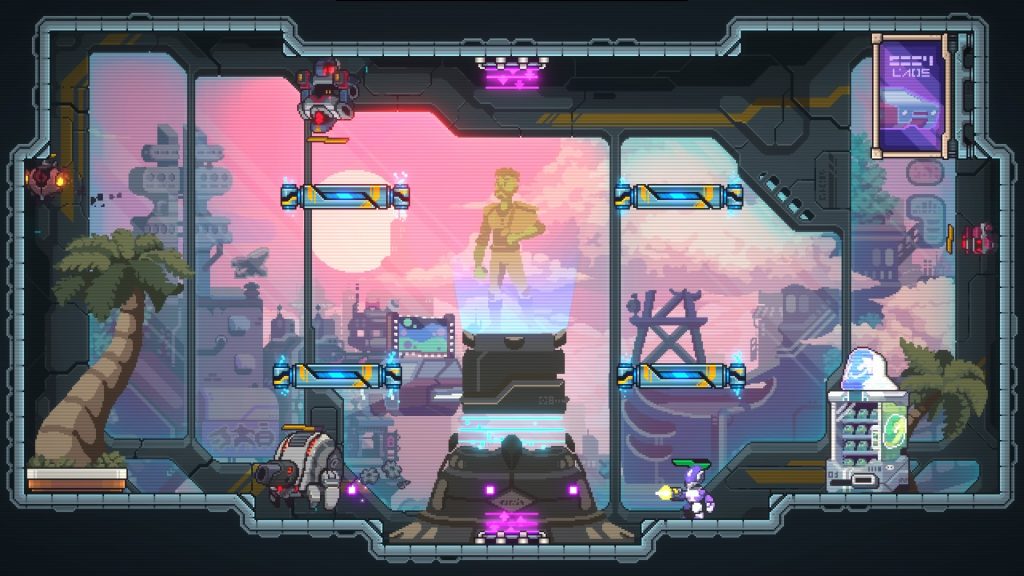 Boss fights offer a much sterner challenge but it’s where I feel the game is much more suited to co-op. These fights are long and require precision as you avoid bullet-hell style patterns or long interludes between phases. These levels take an age to beat with the bosses carrying a substantial health bar. They also show Gravity Heroes‘ most creativity. Some trade in multiple stages, expand on the gravity mechanic and offer something more substantial than the usual levels.

It’s a shame they’re so lengthy. These behemoths have plenty of health to chip down and the plentiful weapon and health drops are slowed to a trickle. It’s not difficult to stroll through the preceding levels but boss encounters prove to be a long contrasting slog. They feel more geared for multiplayer and the added numbers certainly cut these fights down to a more manageable time investment.

The frequent drone drops slow to a trickle in these arenas. It leads to a battle of survival as you learn patterns and require patience and precision to proceed. I’ve been frustrated by these and it’s a shame it’s so at odds with the other stages. Without them, the game would be over in a flash but these more involved spectacles result in a single-player experience that has some wild swings in challenge. 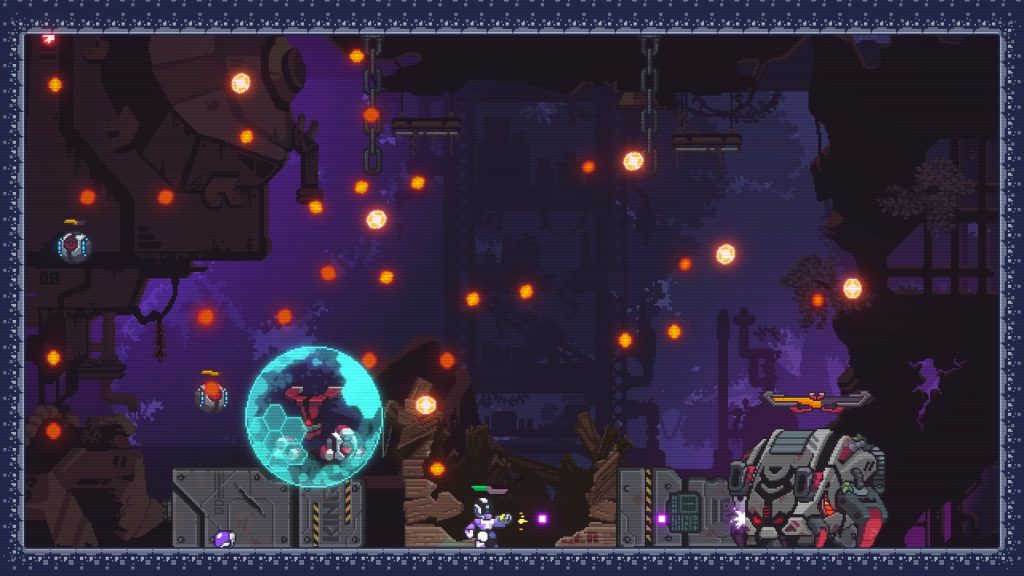 Above all else, there just isn’t much to Gravity Heroes. The game’s 15 stages can be beaten inside two hours and the lack of weapon variety sells a decent concept short. You have four characters to choose from but they’re just there for a change in cosmetics. Aside from your standard pistol, you have three other weapons you could pick up at random. Aside from that, you can acquire grenades, armour and health. By the end of the first two levels, you’ll have seen most of them.

There’s not much to say about level design. They typically take place in boxy rooms with a few platforms sprinkled in to make use of the gravity. Enemies spawn in at predetermined points. Much like the weaponry, there’s a handful of enemies you’ll come across and their varying behaviour is something to be wary of. Each area does introduce new challenges, enemies and the layouts do change regularly.

The music and pixel art is well done. There’s some nice, smooth animation on display and there’s plenty of detail to the visuals. Losing your helmet as you take more damage is a nice touch and it all seems well produced. It’s colourful and, when the action gets hectic, the screen doesn’t look muddled. At times, the visuals really spread their wings and that’s commendable when the art style is so prevalent. 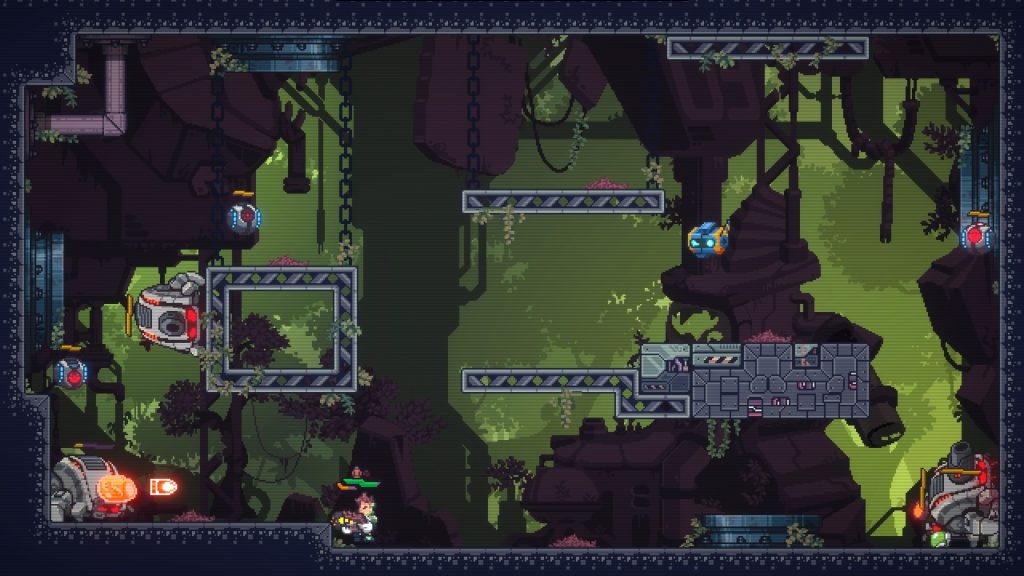 Outside the campaign, things look lean. A survival mode and competitive versus modes bolster the offering but not by much. Enjoyable for those with friends over but solo players are left wanting. It’s a shame they don’t do more with the concept and it leaves Gravity Heroes feeling a little skeletal.

Ultimately, Gravity Heroes delivers something that is reasonably well done but very short in the memory. The combat’s decent and the use of gravity allows some inventiveness to flourish. It’s unfortunate the challenge in the campaign fluctuates wildly for those that choose to play on their own. The boss fights certainly feel tuned towards higher numbers and the remaining content feels slim.

Gravity Heroes
5 Overall
Pros
+ Nicely detailed pixel art.
+ Decent music.
+ Combat feels responsive.
+ The boss fights allow for some real creativity.
Cons
- Solo players will find this tough to get through.
- Short campaign with wild difficulty spikes.
- Few game modes.
- A lack of weapon variety.
Summary
Gravity Heroes is best played with others. Whilst you can tackle the campaign alone, the boss fights seem to be scaled for multiple players. It's also where the game's creativity resides. The controls can take some getting used to but the gravity mechanic does mean thinking about foes from all angles. Combat is fine although a little more variety could have helped with weapons, in particular, being on the small side. It's all presented nicely with some detailed visuals but the remaining modes don't appear to offer much in the way of longevity.