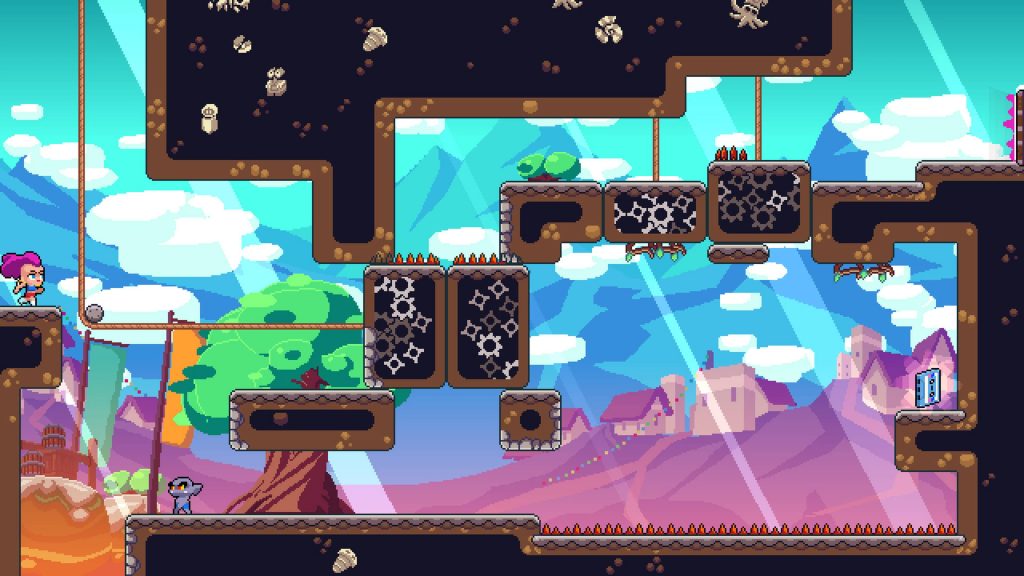 If you look at the screenshots, you may already have an idea of how you feel about this one.  The unfortunate side effect of reviewing games over an amount of time, is that you will inevitably encounter trends or tropes that just keep coming back and it becomes very difficult to not just take things at face value and count it as ‘yet another one’. These days, mould breakers are becoming increasingly rare, with only Super Meat Boy and Celeste making headway in the challenging retro styled platformer space, based on recent memory.

The issue with this familiarity is that judging these games can be a challenge in itself. Are the issues the fault of this game specifically? Or are they indicative of the state of genre as a whole? It can be hard to make that call sometimes, especially when it comes to the level of enjoyment being experienced while playing. To be up front, Glam’s Incredible Run: Escape from Dukha is pretty much what you would expect. It’s a challenging platformer that requests precision from the player, presented in a retro style and is about as standard as it gets when it comes to the overall experience. 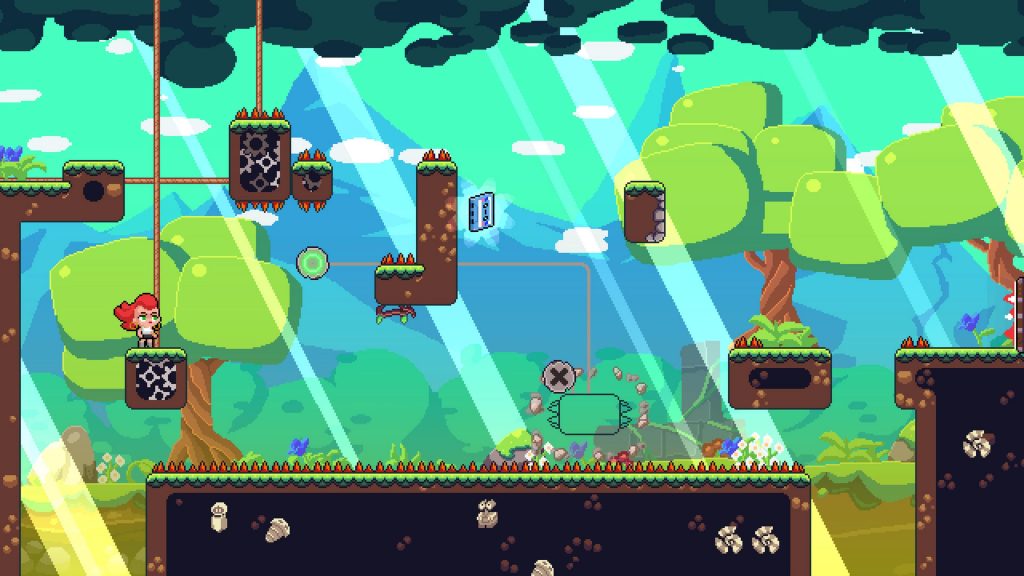 In this, you play as the titular Glam, a long-haired heroin that is on a mission to save her mother from an evil witch. To achieve her goal, she needs to run, jump and swing (with her hair) through over two hundred stages over eleven chapters of levels. Each level is a single screen platforming challenge that gets progressively more difficult as the game progresses thanks to the introduction of obstacles, such as wandering goblins or fire throwing skulls that litter the landscape. Further challenges come in the form of basic puzzle elements, that sees the player having to navigate blocks that switch in and out of existence or push/pull blocks that you need to line up well enough to get a good run at the end of level goal.

From the above, you can see that Glam’s Incredible Run has at least the design fundamentals of the modern-day retro platformer. However, despite the trickle feed of obstacles and puzzles, there is a distinct lack of variety throughout the adventure. There are no boss fights, story beats or mini games to break up the levels in between and the obstacles you encounter in Glam are all a variation of the gimmicks you have seen time and time again with other platformers on the market. Even the flagship feature of swinging with Glam’s hair has been done countless times in other titles and better. 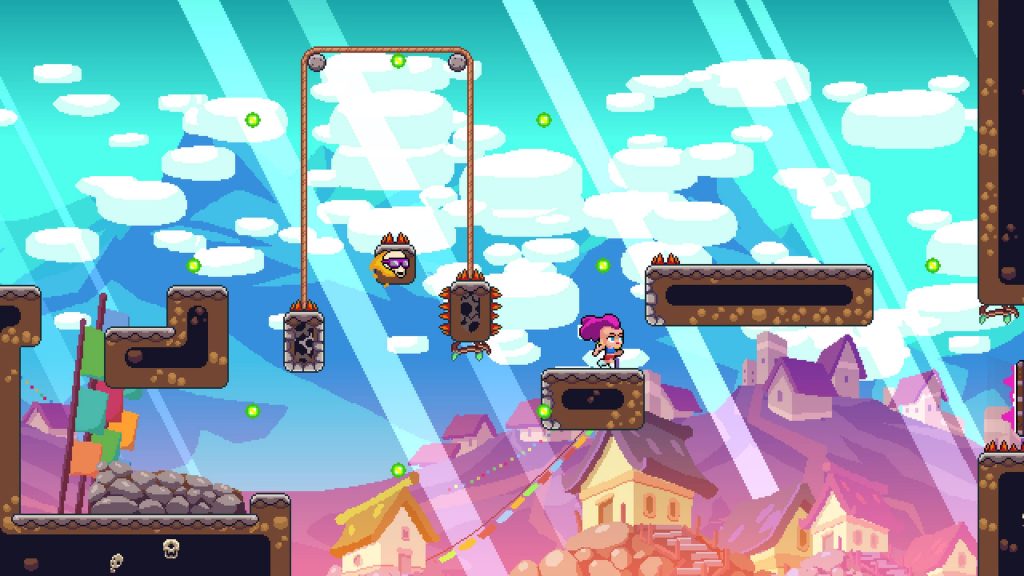 This sameness is further perpetuated by the overall aesthetic of Glam’s Incredible Run. The Pixel art aesthetic is fine, particularly in the stage design. However, with each of the eleven chapters taking place over similar locales, it can often feel that things aren’t progressing as the backgrounds don’t change often enough. It’s like playing a challenge run of a game like Mario Maker, but every level is using a similar template, with the only difference being where the platform blocks get placed. When you consider again that there are over two hundred of these levels, that initial feeling of value quickly becomes a feeling of dread and instead, a test of endurance.

Going back to fundamentals. There is a glaring issue when it comes to control. The basics are here sure, there is a button for jumping, another for swinging with Glam’s hair and a squeeze of the trigger to grip against certain climbable surfaces. This sounds fine on paper and is when you only must do one or two of these actions. However, as the game progresses and players are tested to use these abilities in quick succession, it can often lead to unnecessary deaths as a simple slip on the pad is enough to send Glam falling to her untimely failure. 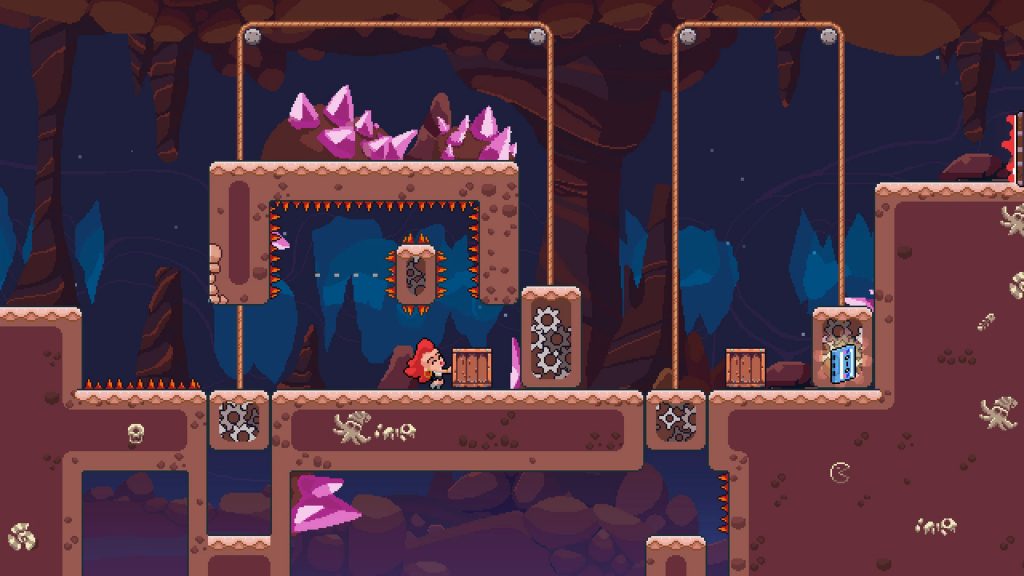 Despite all the above though, there is a decent enough game here and if you aren’t someone that habitually plays platformers all the time then there is some value to find. This is especially true when you consider the low-cost barrier even when out of a sale. However, there is also an argument to be made that there are plenty of better experiences out there for a similar price. This makes Glam’s Incredible Run: Escape from Dukha very hard to recommend, it simply offers nothing new to the table and while not every game has to do this, it needed something to carry it outside of mediocre territory.

Glam's Incredible Run: Escape from Dukha
5 Overall
Pros
+ Good movement system that feels responsive and speedy
+ Nice pixel art background aesthetic detail
+ Cheap enough
Cons
- Awkward, imprecise controls
- Formulaic and unvaried throughout, offering nothing new
- The focus on difficulty only makes this more a test of patience than actual skill
Summary
You run, you jump, you die in this formulaic and predictable adventure. Glam’s Incredible Run: Escape from Dukha is about as standard as it gets for challenging retro-styled platformers and does nothing to elevate itself from the crowded competition.