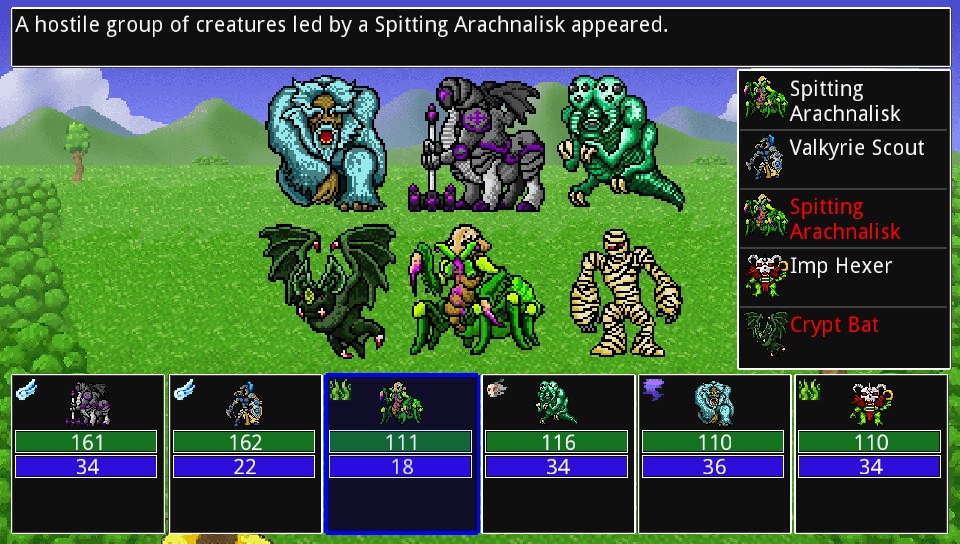 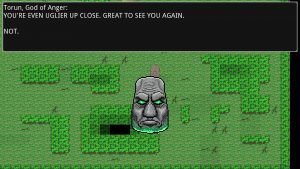 Siralim 2 is a new cross-buy release on the PS4 and PS Vita. Looking at the images you can probably guess it takes inspiration from old school JRPGs, specifically Dragon Quest Monsters.

You play as the King or Queen of Siralim (you choose your gender and name) who also happens to be a mage. You get to choose whether you specialise in Chaos, Death, Life, Nature or Sorcery which will determine your starting monster companion. You are then told by Vertraag, the God of Time, that a demigod called Misery has risen to power and is coming for your kingdom. Simply put you are the only one who can stop him, but you must become more powerful to do so.

Upon starting the game it states that it is light on story and that would be correct. Yes you have a big bad to aim for but don’t expect much in the way of story development or character arcs here. It’s the RPG mechanics that hold the spotlight. Although you only start out with one monster you quickly get two and then before long you’ve got a full roster of six. You can continue collecting more and switch them in and out as you please or the situation requires.

All monsters have a perk that can make them super useful. I chose to be a Life Mage and so started out with a Dusk Crusader. After the Dusk Crusader attacks it gains a 40% boost in defence which for the longer battles is massive. Other than that there are creatures that will counter attack for other members of your party, others that will poison all enemies upon being attacked or perhaps their attacks will cause status effects. There are over five hundred monsters in the game and so they aren’t all created equal but chances are your team will differ to someone else’s and still be perfectly viable.

Shortly into the game you will gain the ability to breed monsters, though the two combined monsters will disappear so although it creates an egg it’s actually more like fusion from other similar games. It can be quite complicated and you need to have found a recipe to create a new type of creature otherwise you just end up with a stronger version of one of the parents but it is a key component of the game, especially if you want to collect them all. 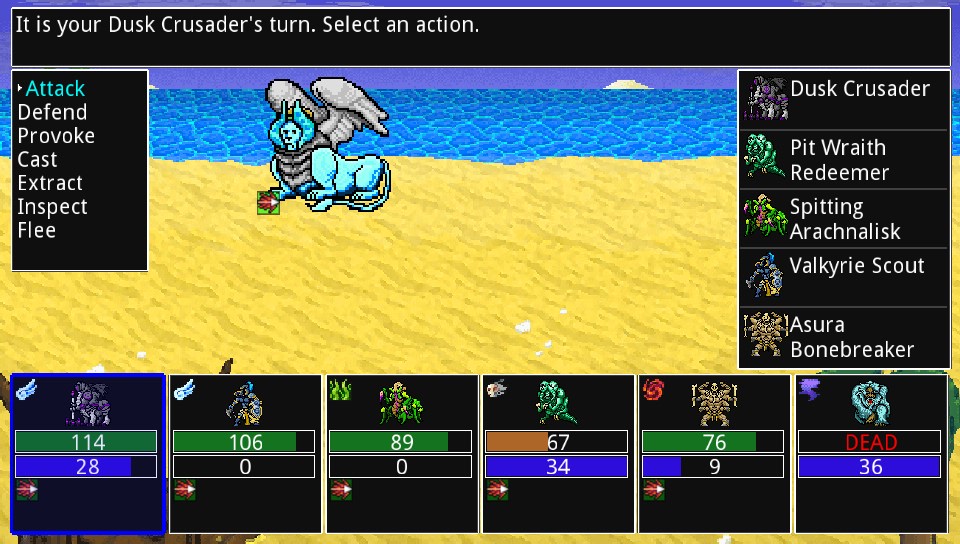 So what do you do with these monsters? Well you enter a dungeon and as you complete each floor you can move onto the next. Each floor is procedurally generated and also belongs to a random realm. Really this makes little difference beyond the graphic style. You run around encountering monsters (who are walking the map, no random battles here), collecting materials and trying to appease the god of that realm. Depending on the god that could involve collecting gold or defeating monsters in battle, but as you gain favour with them they reward you with new monsters and spells.

Completing a floor only really involves finding the exit but obviously exploring the floor will reward you with experience and items. I’d have liked the map to be more useful as you can’t scroll it, only look at the portion you’re stood in and both the paths you uncover and the parts you haven’t uncovered are black, so all you really see is the walls in a grey. Just using one more colour or shade would make it so much easier to tell where you have and haven’t been but as it is the map isn’t of much use.

Battles resemble old school RPGs where your character stats are at the bottom of the screen and the enemies line up in front of you with no animation whatsoever. Some spells have certain effects but beyond that it’s a very minimalist style with only a line of text at the top of the screen to tell you what just happened. It’s a system that works though it won’t be for everybody. The battles can be quite slow but there are options to speed it up a little with a turbo setting that lets you skip and an ultra turbo setting as well. I’d have liked a battle log that I could consult as at times one of my monsters will die all of a sudden as I click through and I won’t be sure which enemy is the most dangerous.

Generally speaking the game is, I wouldn’t necessarily say easy, but it’ll be mostly smooth going. You can dispatch most foes without too much problem and when the battle is over every creature gets their health and mana completely refilled so you can fight each battle like it’s your last. Even dead monsters get the same experience as the ones that completed the fight and if the entire party dies then you just get kicked back to the castle and can renter the floor you were on, though it will regenerate itself and may even be in a different realm. 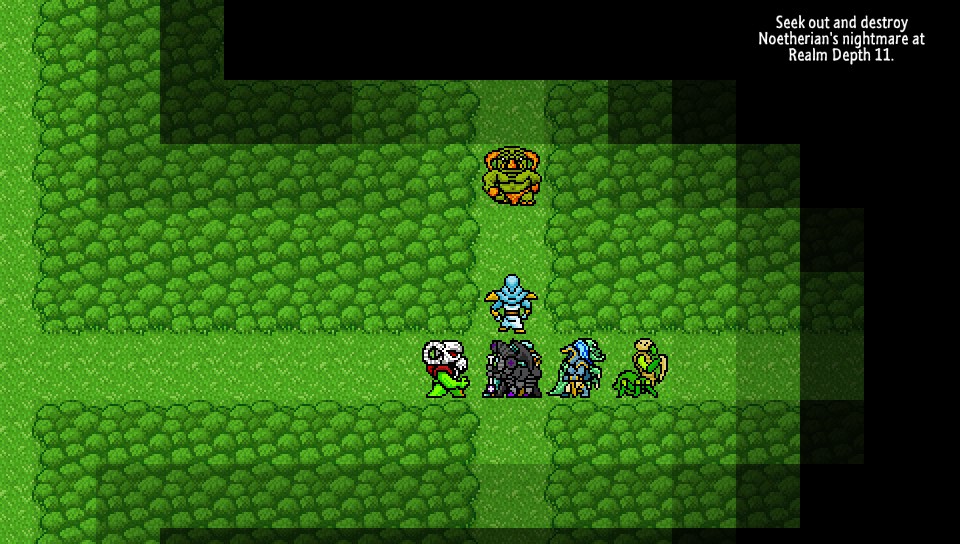 Boss battles tend to be a little more challenging in that they’ll have a special element to them like every enemy counter attacking every attack they take or the main boss being invincible until you defeat his colleagues but depending on your setup you should still be able to progress with only minor adjustments.

You get given simple missions to guide you on what to do and where to go which will introduce you to certain mechanics back at the castle or tell you when you should be advancing up the floors. In the castle you can expand the facilities you have as you progress, with a blacksmith and the breeder and so on.

It’s actually a good example of what the whole game is about really. It won’t be the story that is pushing you onto that next floor, you’ll want to be unlocking that next castle upgrade, gaining that next monster, appeasing a specific god. There are lots and lots to do in Siralim 2 and if it’s the type of thing that appeals to you then there’s quite a hole to fall into. I’m not sure if grinding is the right term for it as although you’ll be doing the same thing over and over there are generally little increments along the way so there’s not a huge amount of time between developments even if your main goal is a while away. That’ll still be a put off to some though.

It’s a cross-buy title so you can try both systems to see which you prefer, though bear in mind that it is not cross-save so your progress will be locked to that machine. I ended up preferring the Vita version. The PS4 version doesn’t fit my television with the text boxes going off screen a tiny bit which just looked bad and I couldn’t see any method of adjusting that in game. The Vita doesn’t have that problem but make sure you get the recent update to avoid crashes and some terrible slowdown that make the game borderline unplayable. Ultimately though it’ll be down to your preference. 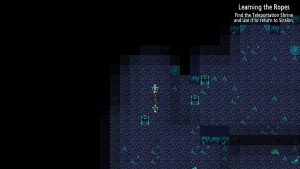 If you’re looking for a content heavy RPG that you can just jump in and out of then Siralim 2 could be right up your street. There is constantly stuff to build towards and things to do though it will depend on your desire to do so as there is little narrative to pull you along. I’d have a preferred a little more story as an incentive to continue, personally, as the floor exploration can be a little slow and the battles can drag on at times but as a title you can just pick up now and again to do a little more it certainly scratches an itch.

Siralim 2
6 Overall
Pros
+ So much content + Plenty of ways to personalise your party + Works in short bursts as well as long sessions
Cons
- Battles and general exploration can be slow - No real story to hide the busy work - No cross-save
Summary
Siralim 2 will keep you occupied for a long, long time if you allow it. The lack of story may make it hard for some to endure but the amount of content to unlock, upgrade and customise will keep people with the right mindset coming back for more.