For a lad that spent a lot of his youth with old machinery, I have some serious blank spots when it comes to retro games. Spelunker HD saw a PS3 re-release a decade ago and it’s come back around again in Spelunker HD Deluxe. A reimagining of a 1983 classic, does it work almost 40 years later? Tozai Games seems to think so. 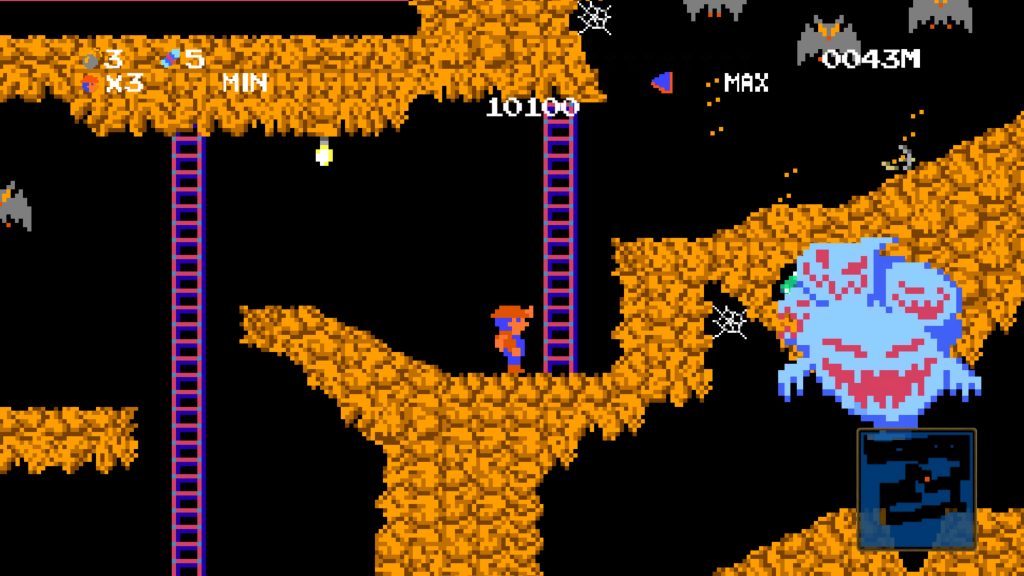 The original is functionally unchanged. Spelunker has been many things on many systems and Tozai Games took this blueprint to heart. The levels have now ballooned to a hundred but the objective remains the same. Plunder your way through increasingly difficult levels and get as low as you can. Controls are simple with the d-pad or analogue stick used for movement. The face buttons deal with jumping, firing off flares and planting bombs. It’s easy to get to grips with but the lives I was given vanished quickly. Old school rules apply with every enemy being a one-hit kill and falling from any height seems to end the cave-dweller’s life. It takes some getting used to and, at times, can feel unfair.

Flares are used to distract bats which tend to drop death from above in random patterns and can be tricky to predict. Most of the other enemies are strictly bound by a routine, except the ghosts which arrive on the stage at random intervals. There’s three different varieties of them but they’re all dealt in the same way. You come equipped with fan you can use to blow them away. The challenge then becomes progressing further down the pit whilst keeping yourself intact. A lot of it involves memory rather than sudden reflexes so, in that respect, it’s something to be conquered through precision and planning. 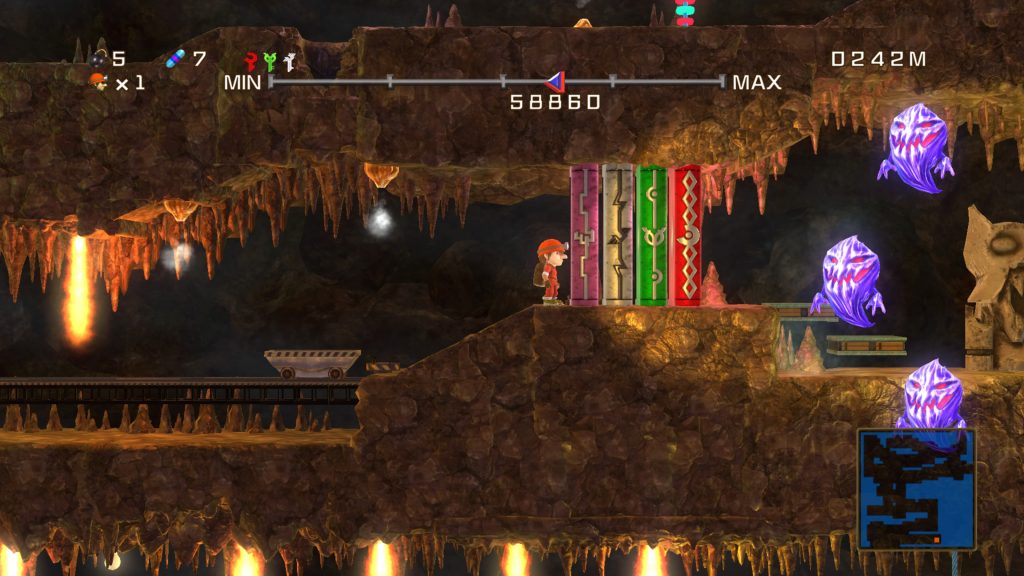 Loot builds your score which translates into extra lives. Obstacles need to be blown apart or can uncover precious gems and you also need to be concerned with oxygen. I’ve never found this time pressure to be a big factor with plenty of power-ups available. If you’re playing Spelunker HD Deluxe well, the lives constraint won’t ruffle your feathers either. Unfortunately, I’m terrible at it. I guess I’m expecting some modern conveniences that just aren’t forthcoming.

As mentioned, it’s already seen an updated treatment on the Playstation 3 but Spelunker HD Deluxe looks a little cleaner and detailed. The retro look can be displayed if you’re a sucker for authenticity but I do think the new visuals add something to the package. It can make some obstacles blend into the background but I think that helps play into the memory-heavy aspects of the game. The classic music is retained with the familiar score tuned up for a more energised feel. 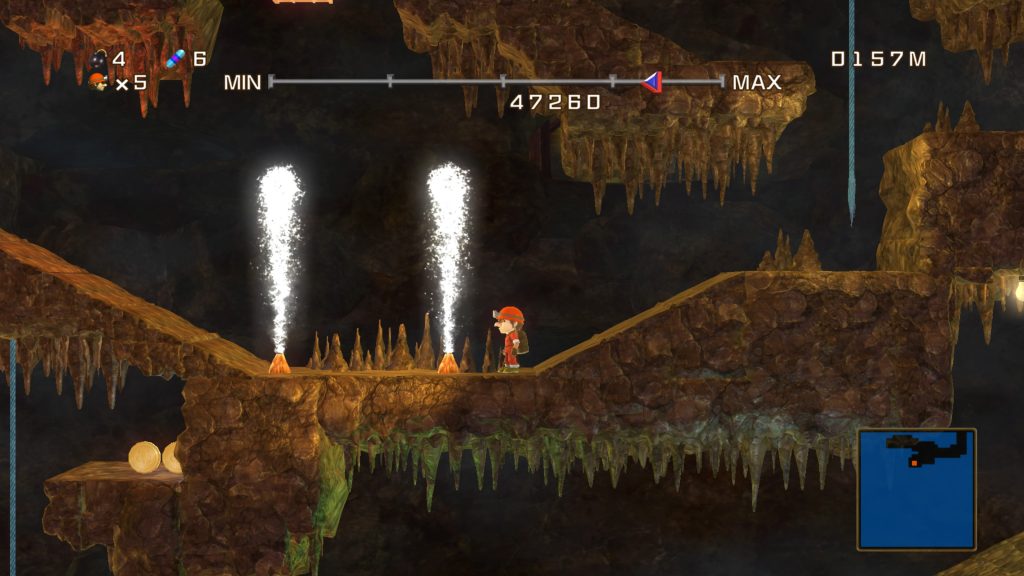 I do, however, feel the jumping isn’t as consistent as I’d like. Maybe I’m just imagining it but I’ve felt some jump inputs be swallowed up whilst others can come out instantly. It’s hard for me to gauge whether I should be anticipating jumps better or let some twitch reactions get me by. The game is a challenge of execution and planning and it can be tough to swallow a jump not being quite right.  It could be down to a lack of patience on my part.

There’s other modes to keep you interested. Both in solo and multiplayer, you can tackle some stages in race format against the clock. These are fun in split-screen but the display is divided into quadrants, meaning very little for each player to look at. It’s not dynamically picking an appropriate split so you’re left with some wasted space if you pick 2 or 3 players. Competition and co-operation can be found online too, although it’s been hard to find players at time of writing. 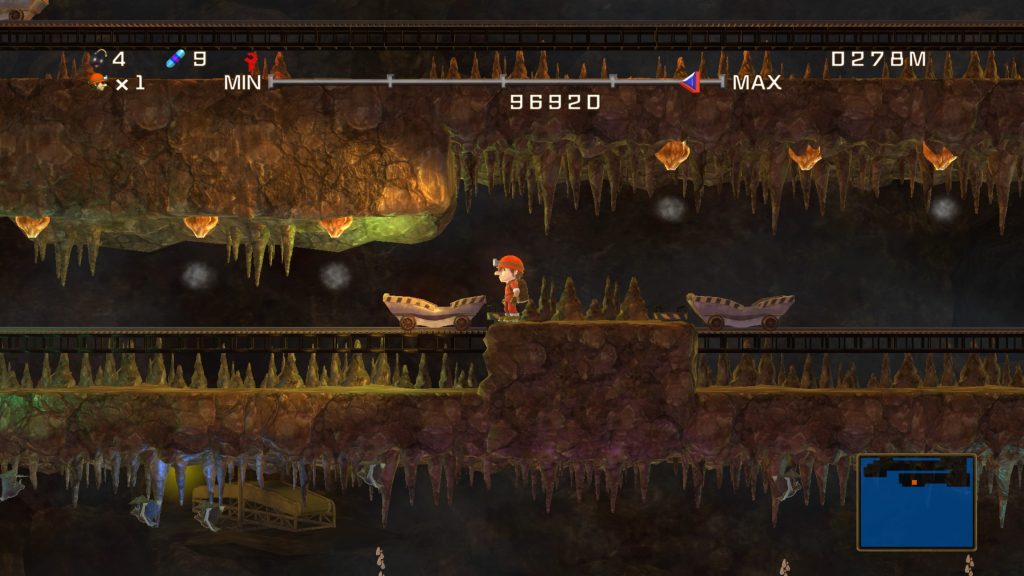 Elsewhere there is an Endless mode which presents you with an auto-scrolling cave. I was expecting something more procedural but the set stage just appears to go on forever. Your aim is to get as low as possible whilst trying not to be murdered by fall damage, the enemies or the top of the screen. These modes do add to what is already a sizeable package. There’s full leaderboard support and the multiplayer modes do allow you to get more spelunking for your buck.

Overall, it’s a hefty package that does well to bring a classic forward. Unfortunately, it is a re-release so you might not find anything new that you didn’t see in 2010. The challenge is still there and newcomers can enjoy or endure that over dozens of levels. I would’ve liked some more options to ease the pain but Spelunker HD Deluxe does present something definitive for fans of the classic platformer.

Spelunker HD Deluxe
7 Overall
Pros
+ A brilliant rendition of a classic.
+ The updated visuals are charming and colourful.
+ Dozens of new levels to tackle.
+ Multiplayer support adds longevity to all modes.
Cons
- Split-screen is handled very poorly.
- The retro challenge might not be for everyone.
- Very, very little in the way of options.
- Online already looks deserted.

Summary
Spelunker HD Deluxe brings an awful lot to the table. Using the blueprint of an old favourite, Tozai Games have delivered dozens of levels with some modern visuals. It does look smarter and a little sharper but the old challenge remains. It controls reasonably well but the memory-heavy nature of the levels will put some players off. With few options available to tweak difficulty or add lives, you're left with an authentic, if divisive experience. Multiplayer does allow you to bring friends along for the ride too.