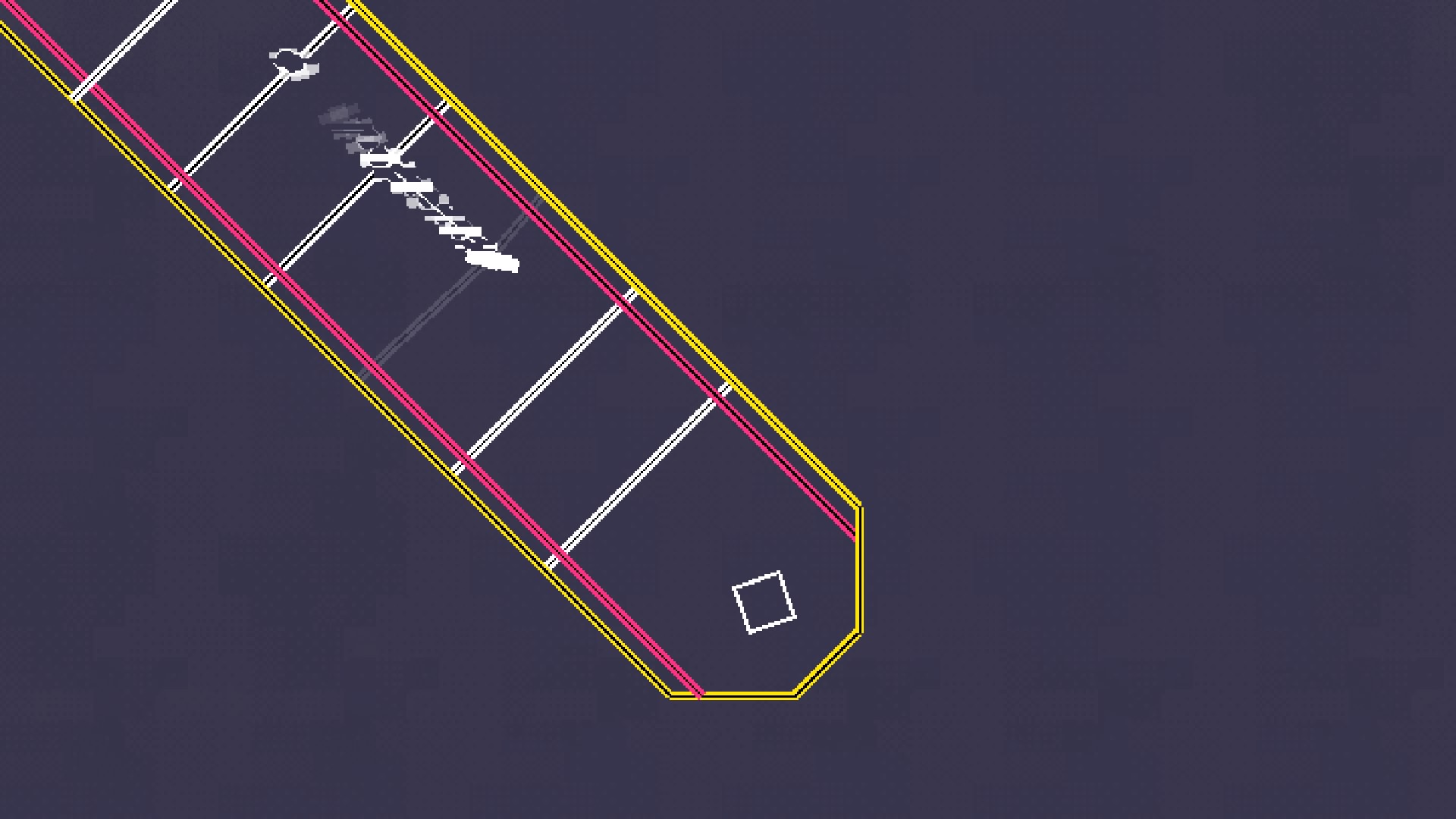 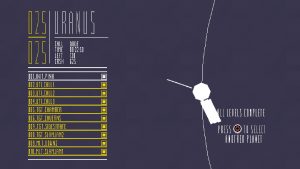 Those who have played Super Meat Boy may recognise Flywrench as an unlockable character. Originally a free title back in 2007 this more substantial release came to PC in 2015 and now here it is on the PS4. As the association with Super Meat Boy might imply this is an indie game of the difficult variety, though it’s not a platformer.

In Flywrench you control what appears to be a line, like the straight piece from Tetris on its side. You are actually flying so gravity is constantly trying to pull you down, so you have to ‘flap’ to stay aloft and make your way through the levels. I initially assumed that was going to be the whole premise to the game but very quickly it became obvious that there is far more to it.

When you don’t press anything you will be white and constantly falling, when you press the cross button you will flap, hold the button and you will turn red though you will begin to fall again. Press square and you will spin and turn green. These three important mechanics are all you need to get through the entire game. That and some skill.

You play in an enclosed course and must reach the end and touch a gate. The course will bend and narrow but there are also obstacles of specific colours. If the obstacle is white then you can pass through it when you are white, if it’s red then you must be red and if it’s green you must be green. The outskirts of the course are yellow and you can bounce along the sides if you’re green, though you’ll quickly lose control. Later on they also introduce pink which can never be bypassed.

Depending on the angle of the line crossing your path they can be relatively easy or difficult to pass through. If there’s a white line above you then you have to gain enough momentum to break through it before letting go of all the buttons as if you flap you’ll turn red and the obstacle will kill you. Going up through a red barrier is slightly easier but going sideways requires a little more panache. The combination of all these obstacles is where the challenge comes in, where you quickly have to switch between the different colours whilst also staying within the course. 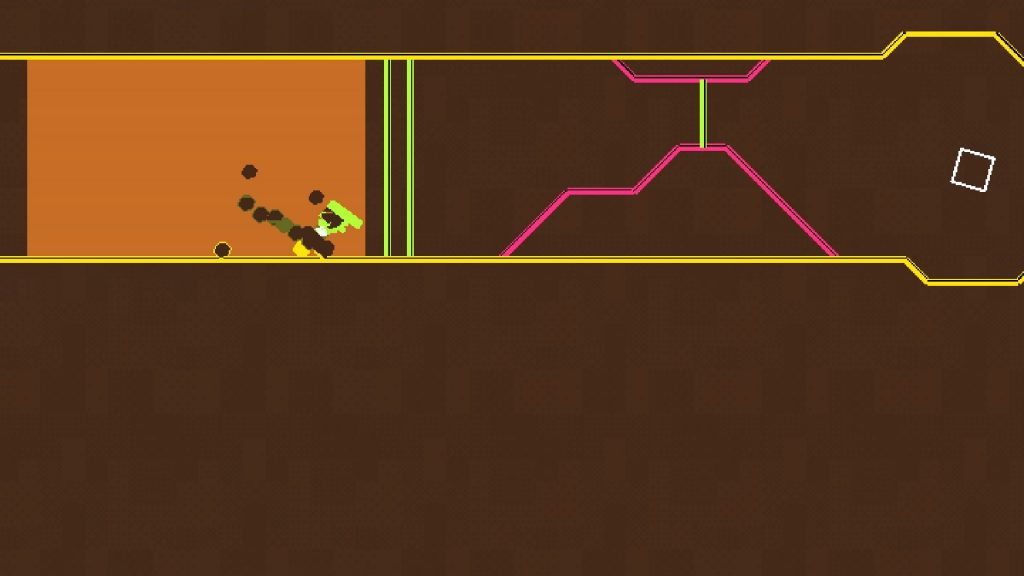 As you progress even more wrinkles to the formula get introduced, from timed switches to moving barriers and turrets. The ‘story’ has you making your way through the solar system, starting at Pluto and ending at the Sun and each planet is where a new mechanic is unleashed. There are a different amount of levels in each planet but it averages around twenty each. That might sound like a lot but the majority of levels can be completed in seconds, with only later ones taking longer.

In fact, I found Pluto through to Venus were actually quite easy for this type of game. I wasn’t completing them on my first try (that’s almost impossible due to the lack of foresight you have) but it wasn’t taking long to blast through them at all. There is an in game timer (which isn’t real time, I spent much longer on it than the game implied) which stated that I’d completed up to and including Venus in just over an hour.

Now Mercury was a different story all together. Suddenly the tracks were narrower, every element that had been introduced were combined to devastating effect and the courses were longer. This took me almost three times as long to complete, with my final time after completing the final Sun level at just over four hours. So one hundred sixty-five levels were, not relaxing, but less frustrating than games of this type usually are and then the final twenty-two were some of the most infuriating I’ve experienced. It was quite a change in difficulty. 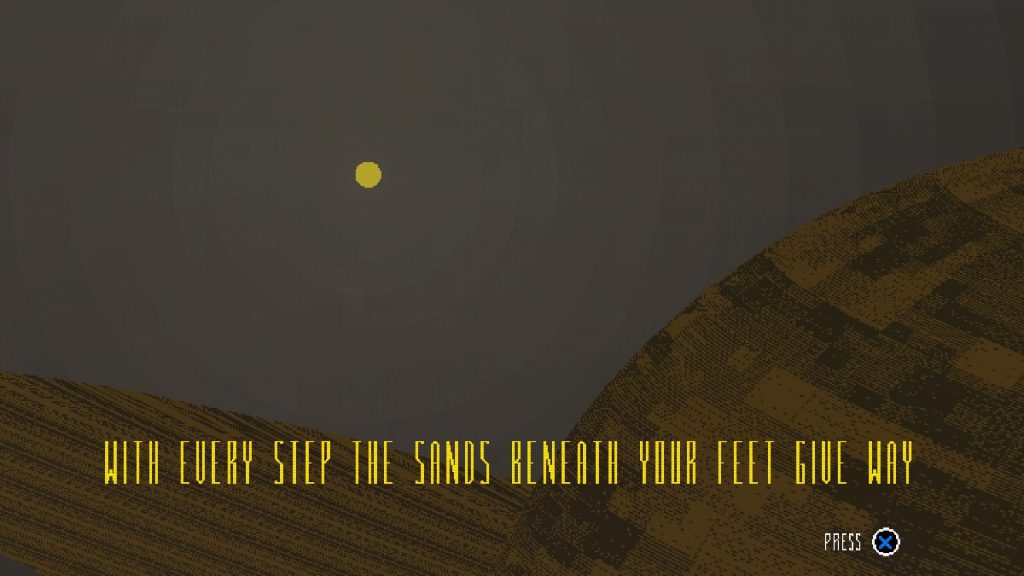 Still if you’re playing this type of game then that’s probably not a negative, the majority of the game is a little easier than veterans of this genre are used to so you’d probably be looking for a challenge, though I don’t necessarily believe every game of this type needs to be hardcore. The controls and mechanics are different to the platformers that usually populate this type of game so there is a learning curve for everyone and the flapping is intrinsically less accurate than jumping though you can certainly become good at it.

There are also twelve bonus asteroid levels to attempt once you finish the game for even more challenge and time trials with online leaderboards if that’s your bag. If you’re finding things too tough there is an easy ‘helmet’ mode which stops you dying when you hit the sides of the level and the barriers disappear as you pass through them so you needn’t worry about them any more. I’d say Flywrench is one of the easier games of this type to get into for that reason and the fact that the difficulty doesn’t ramp up for a long while.

The visuals are 2D but are simple and effective allowing you to see all the necessary information though if you have trouble seeing colours you might have a hard time. The music is by a range of artists and one track plays per planet and continues on loop as long as you remain there which is good since you’re dying or changing level every few seconds and the music doesn’t grate considering the length of time you can be listening to them.

I did encounter a couple of bugs in my time playing. The first is an obvious one in that if you pause the game then upon resuming the level doesn’t actually respawn, leaving you staring at a blank screen and you have to go back out to the level select to get back into the level again [NOTE: This has now been fixed so that the level restarts upon resuming]. I also had the game crash after completing Jupiter and I lost all my progress. It didn’t say the save was corrupt I just had to start all over again. It never happened again though I was careful to double check everything had saved for the rest of my time playing the game. 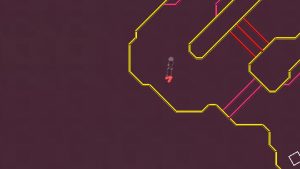 Flywrench is a different yet very good action-obstacle game. Flying isn’t as predictable as jumping but with enough practise you can certainly learn to control things. Nine-tenths of the game are relatively simple making for a more welcoming game but the final section arguably undoes all that to frustrate all but the best players. If you enjoy mastering mechanics to improve level times then Flywrench will serve you well.

Flywrench
8 Overall
Pros
+ Lots of levels + Eases you into it, especially with Helmet mode + More to the mechanics than it first seems
Cons
- Easy, then very difficult all of a sudden - Pausing for a break is useless thanks to an obvious bug [fixed in patch]
Summary
Flywrench is an excellent action-obstacle game. The game eases you in gently for a little too long before cranking the difficulty sky high which will put off some players but if you master the controls then you're sure to relish the, eventual, challenge.