It’s September and that can only mean one thing. PES has had a few weeks to shine, and shine it did, but now FIFA is back, ready to suck all of the oxygen out of the genre and to try to establish its place at the top of the pile until this time next year.

We’ve learned not to expect too much in the way of new features from FIFA, or indeed PES, as these games have been painstakingly simulating football for decades now and so there isn’t really anything about the sport that isn’t covered in these games but FIFA 19 does have a few tricks up its sleeve for this latest iteration.

If you are a soccer fan you should know that the Qatar World Cup is right around the corner and the world cup schedule is already available for you to check your favorite teams will be playing. 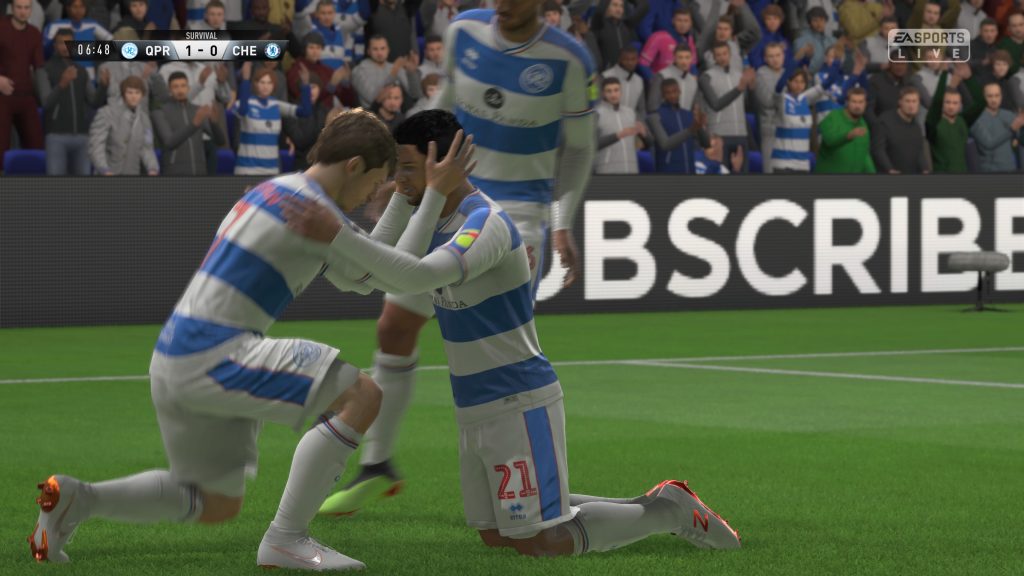 Football obsessives will mainly notice the fact that the license for the Champions League has now made its way from Konami to EA.  To be fair, you couldn’t possibly miss it as the game throws you into a Champions League final as soon as you load the game up.  This is a major result for EA though and its inclusion allows FIFA 19 players to enjoy all of the pomp and circumstance of the world’s biggest club competition. Of course, EA have pulled out all the stops when it comes to showing off the pre-match build up so fans of European football will be in their element here.  The only downside being that the competition has its own commentary team of Derek Rae and Lee Dixon and they struggle to match the otherwise fantastic presentation the game offers.

Of course all of the usual modes are there too. Career Mode is there if you want a Sensible World of Soccer mix of playing and management. This mode is pretty much unchanged from previous versions of the game but offers months of gameplay for those of you who play it, albeit fans of the mode will be disappointed to see EA giving it such a low priority compared to Ultimate Team which returns, despite the recent controversies around lootboxes. 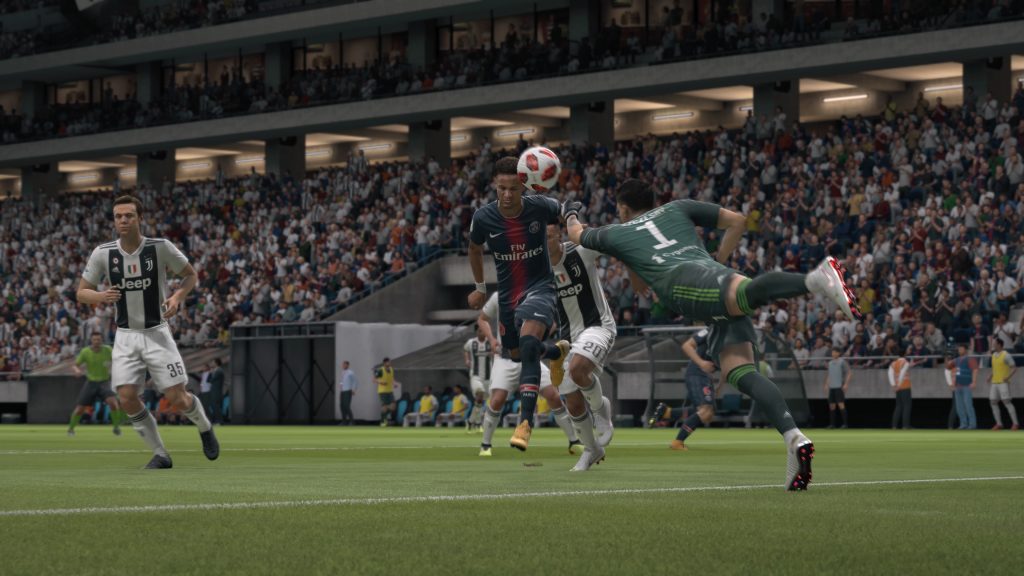 As with last year’s iteration, Ultimate Team is actually the most substantial mode here.  Sure, you can end up in a ridiculous arms race spending real life money for a not real life Ronaldo and there are players out there who are doing that but the mode’s mix of offline and online options combined with various daily and weekly challenges, and the squad building stuff means that there is plenty to do.  I’ve spent far too long on the squad building challenges.  These are interesting and act almost like little puzzles as you try to create squads of players based around specific demands.  So you might need to build a midfield of five players with just one nationality but all players have to come from different leagues.  It’s pretty compelling, even if the rewards for each challenge feel like you’re being mugged given that you lose the players when you submit the squad.

The downside with Ultimate Team, and this is one that has plagued the mode since day one is the economy behind it.  You may have to play ten matches to earn a 7500 point gold pack and 99% of the time the best thing you’ll get out of that is some player who is rated in the high 70s and doesn’t fit your team chemistry whatsoever.  However, if you go to the marketplace and try to buy the players you want, there’s very few bargains to be had.  You’ll see 30 of the same player, all at roughly the same price.  And when you do try to do a cheeky last second bid, it adds a bit of time to the auction, essentially meaning that all the auctions tend to settle at around the same price.  The upshot of this is that it takes bloody ages to get a good squad together (unless you want to pay real money).  Opening a pack that’s taken you ages to earn just to end up with some Bundesliga right back and a bunch of contract and fitness cards feels very unrewarding. 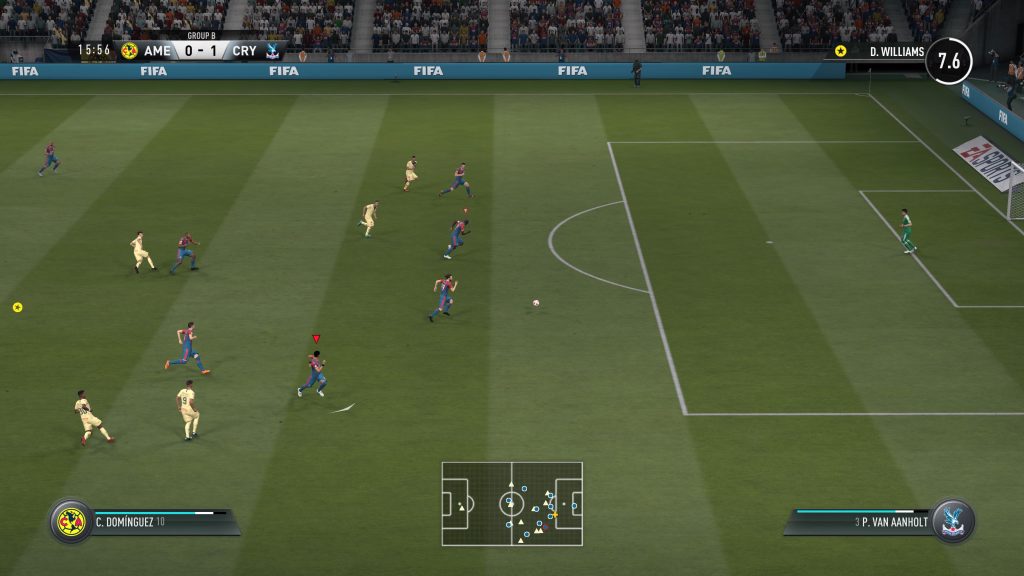 Back in the regular game modes, the most interesting addition is the new House Rules section. Here you can play offline games with special rules. The best is Survivor mode where you have a player randomly sent off every time you score. Long shots mode is another great one. This is where goals from outside the area count for double. It’s a shame though that these rules can’t be applied online, and sure they’re a bit of a novelty, but we appreciate it. We still yearn for those five-a-side matches from FIFA 98 to return. EA knows it too but presumably don’t want to write off their FIFA Street series entirely yet.

Having had a good few months away from FIFA 18, I was ready to play this. Other reviewers will try to tell you that FIFA 19 is a little slower than before, that the strength stat comes into play a lot more and that pace isn’t as big a factor and… well… I’m not so sure.  My playing style (which generally involves cutting out the midfield by using wingers and by playing lots of through passes) still seems like a valid tactic and pace still makes the difference but I will agree that the physical tussles between players seem more apparent. There’s a physicality to matches that is quite noticeable. 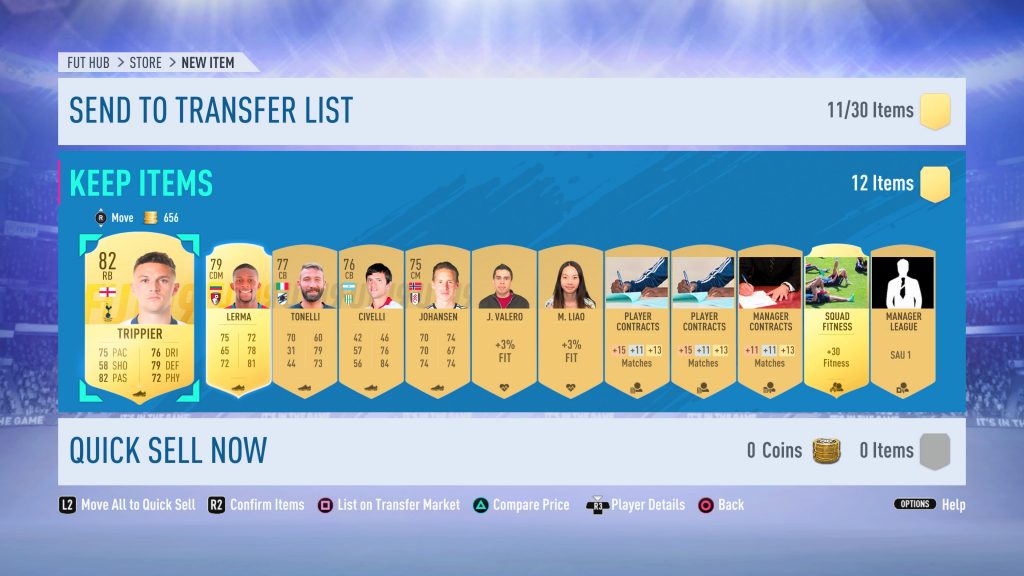 Shooting feels much the same as before but with an additional, but entirely optional, extra feature. When you take a shot, a Gears of War style active reload bar is displayed. If you tap the shoot button again and get it to stop in the green, you’ll have taken a perfectly timed shot. So far it seems utterly superfluous though and your attempts to master it will more than likely make you fluff your lines. Ignoring it has been the way ahead so far and I’ve not found goals that hard to come by.

It may be my imagination but the action does feel incredibly smooth. Other reviewers have mentioned some sticky frame rates but on my Pro it all seems relatively buttery. The overall feel is similar to a few years back when PES had the better game and this iteration of FIFA feels closer to that than it did before. Although with these games you really are scratching around looking for these differences but it was apparent to me from the demo that the action felt a little slicker than before and the full game has followed through with that. 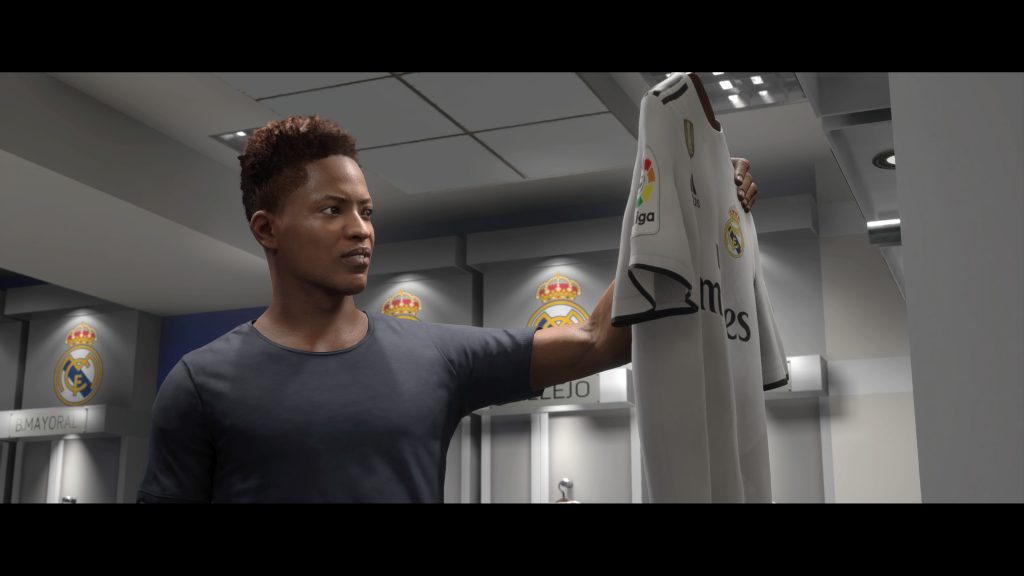 Fans of FIFA‘s story mode, The Journey, are very well catered for here. The story continues where it left off last time and this time has you playing as Alex Hunter and Danny Williams as you did before but also gives Alex’s sister, Kim, a more prominent role. You can switch between them as you like but the game will recommend who to play as if you want the optimal story. Personally I stopped caring about Alex with his daddy issues and glittering career in FIFA 18 and much prefer Danny Williams’ more down to Earth story but it is good that the game uses your save data from last year’s game to shape the story.  It does go on a bit though, especially now that you are juggling three stories, and the choices that you make during the game don’t really seem to matter all that much but the mode does have its place and we’ll probably miss it next year if it doesn’t return.

The usual high standards are still in place when it comes to the game’s visuals.  All the kits, stadiums and TV-style graphics packages are recreated in almost obsessive detail.  There’s still a little bit of the uncanny valley effect with the players, but they are recognisable and the detail on them is pretty remarkable.  What really stands out is that FIFA 19  on a HDR television actually looks a little better than watching the real thing.  You can see that nothing is missed, right down to the blades of grass.  The animation is even better with seemingly every possible interaction between a player’s foot and the ball being accounted for.  The ball doesn’t feel like it’s part of the players’ animations but is rather its own independent object. 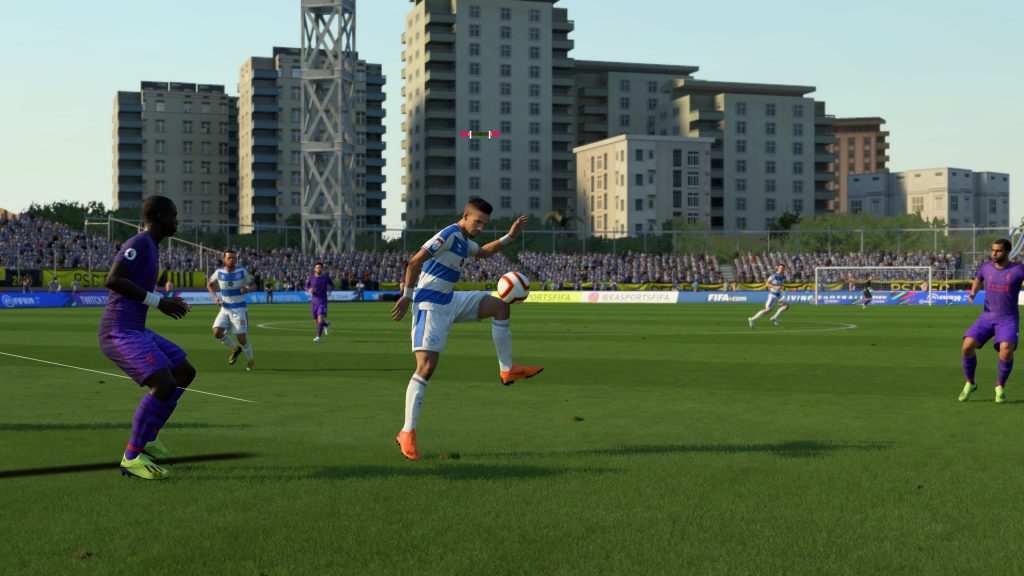 This means that goals can go from being Bergkamp-esque examples of close control and juggling to downright scrappy affairs.  One minute your player is taking the ball down and readjusting to the its inertia to swivel their body and blast it in and other times it is going in off of their arse.  We take this sort of thing for granted but it is amazing just how well the physics in these games are implemented.

Of course, the question remains:  should you buy it?  Well, if you’re an Ultimate Team obsessive then you already have.  If you support a team who have been promoted, or at least signed someone interesting, then that might prompt you.  If you like playing online and your regular party chat buddies have upgraded, then you might have to.  If you’re a bit more of a casual fan, then you might want to wait until the price drops but there’s a lot of game here for your money.  Not a whole lot of new game, that’s true.  But if you want the best football simulation money can buy, FIFA continues to deliver.  At least until they remaster the PS1-era Pro Evo games.

FIFA 19
8 Overall
Pros
+ Excellent on the pitch gameplay
+ Unparalleled authenticity
+ Tonnes of modes and things to do
+ The Journey adds some decent single player content
+ Ultimate Team remains very addictive
Cons
- Ultimate Team economy is very unrewarding
- Doesn't offer a lot of difference over previous FIFA games
- New commentary team for Champions League matches isn't great
Summary
When it comes to modes and features, FIFA 19 merely tweaks the formula rather than going full on Tinkerman with it but if you want an almost perfect simulation of football, EA deliver once again.