Fe from Swedish developer Zoink! via the EA Originals indie game imprint, is a rare example of a game with minimal handholding.  Fe has nothing to do with iron though, the titular character being a Swedish word meaning fairy.  The same developer previously produced bizarre mind control game Stick It To The Man. Forget that game ever existed though as this is such a stylistic departure from their previous work, so  much so you’d never pin it on the same code shop.

The forest based setting is a clear product of the environment that covers much of Scandinavia; it’s all very atmospheric and initially mildly scary and foreboding.

The minute you begin the game you’ll be struck by the utterly charming and beautiful playground you find yourself in. My four year old delighted himself for a good half hour purely just running in circles and climbing trees, it was all I could do to get him to relinquish the controller.  Fe evokes a sense of childlike wonder very well in both its setting and from the inhabitants of the forest you’ll explore. You’ll want to just run around aimlessly, never actually getting on with the task at hand as my son aptly demonstrated. 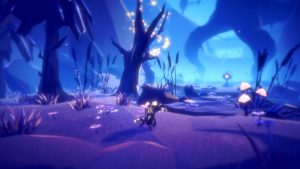 In Fe your character is a fox-like biped who communicates with other creatures of the forest, not by talking in the conventional sense, but by singing to them via a push of the

button on your controller. You’ll need to modulate your voice to sing not at the highest volume possible, more one that doesn’t scare off your new friend.

There’s no UI or screen furniture to speak of, the only prompts you’ll get are when the game introduces a new mechanic. It’s nice to be treated with intelligence as new techniques are gently drip fed as you progress through the game.

Your initial encounter with a new creature unlocks a new ability, in the case of the deer you’ll spend the opening scenes chasing, you’ll gain the skill to interact with flowers that allow you to jump to previously unreachable areas.

Not all of the other forest dwellers are friendly though, generally they’ll want to eat your face. An angry catfish and mildly vexed bear being early examples of hostile foes.  The former only really presenting a problem when you’re in his stretch of water. It says a lot about the singing mechanic and the harmonious nature of your relationship with other creatures that you’ll feel a little sad when they don’t reciprocate.

At times you might find yourself a bit lost as to what to do next. Thankfully you can sing at the top of your lungs for a helper bird, akin to Navi in the Zelda games, who’ll show you your route to the next  objective. It’s usually very helpful, although you might still find yourself retreading an area over and over again due to the bird’s path not actually being that obvious. 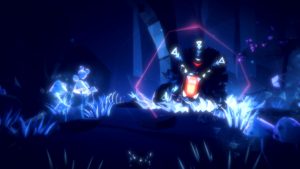 There’s an in-game map that shows you where your next objective is, though it doesn’t really help beyond giving you a flashing map marker. It all adds to the overall feeling of finding your way in the world, some gamers might find this too much to cope with in this day and age.

The main enemies are known as The Silence. If they catch sight of you or hear you, they’ll attempt to hunt you down and cocoon you resulting in your death. They’ll give up their search if they lose sight of you for an extended period, whether it be from your running away or finding a conveniently located bush. Amusingly they’ll forget you exist even if you jump into a bush immediately adjacent to them. Metal Gear Solid this is not.When they’re not hunting you down, the enemies are subduing your fellow arboreal dwellers every chance they get. You’ll get the opportunity to free them as you progress through the game as you tip the balance back in your favour.

There’s a few collectables scattered throughout the forest but you’re best off playing through the game and enjoying your adventure rather than getting bogged down searching for every last item. You can revisit all the areas in the map once you’ve finished the main storyline anyway, so it’s not the end of the world if you move on to another sub-area without having cleared out all the trinkets in there. 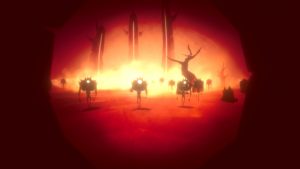 One of the nicer collectable touches are Silent helmets that let you see the world from the point of view of one of the enemies. While their motives seem opaque beyond evil, it’s an interesting change of pace and a clever piece of plot exposition.

There isn’t really one as such, all of the storyline being told by wordless interactions, not a caption in sight.  Your imagination is the main storytelling tool, you’ll come to your own conclusions by the time you see out the end of the adventure.

In conclusion, this is a lovely atmospheric game with fun gameplay and barely a dull moment. It might not be everyone’s cup of tea, but it certainly hit the spot here.  Fe is out now on PS4.

Fe
9 Overall
Pros
+ Wonderfully atmospheric, amazing sense of place
+ No UI clutter
+ Interesting variety of powers to unlock as you progress
+ Sometimes less is more when it comes to plot

Cons
- Occasionally you'll get a bit lost
- Rudimentary stealth due to enemies having short attention spans
- Some gameplay elements can be a little opaque
Summary
A wonderfully atmospheric 3D platformer that you need to play right now. Go on, jump to it.