Fantasy Friends is a child-friendly title from Spanish developer Xaloc Studios which is best described as a mobile-esque Viva Piñata-lite kind of affair.  It’s bright, colourful, easy to get into and very much aimed at younger children (if you can pry them off their iPads, Minecraft or Fortnite).

The premise behind the game is simple enough.  You’re in a ‘fantasy forest’ and it is your job to help birth and look after pets.  The game explains this quite well but the basics are this.  You start with an egg and you have to rub it to warm it up so that eventually a baby pet appears.  The pet will move into its own house and from there you’ll need to interact with it based on its need for food, affection and hygiene.  All three of these (well, four, as hygiene comes in two types) involve dragging your cursor over the pet with the left stick while holding 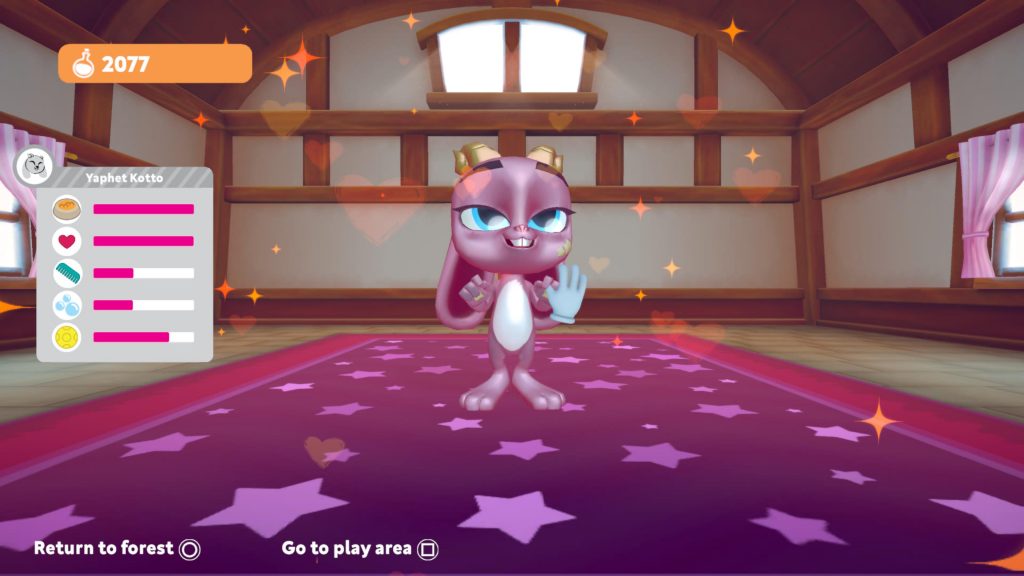 Doing that will earn ‘mana’ which is this game’s currency.  Earn enough and you’ll be able to buy another egg and so the cycle continues until you have unlocked all twelve pets.  Along the way these pets will evolve into a slightly different form and their demands will increase a little as now they’ll also need some activity time as well.  Activities are mini-games and each pet has a different one although they are all very simple and many share similar elements.  But it is nice to see obstacle courses, rhythm action games and things like that even though they are very trivial.  The game’s not for you though unless you’re a child or Chelsea season ticket holder.

Evolved pets also have their own mini-games for creating food.  These generally involve rotating the left stick or doing very basic pick up and drop actions but the attempt at variation is welcome.  Even if it’s all much of a muchness and once you’ve seen one once then it all just becomes busywork for the rest of the game’s lifespan. 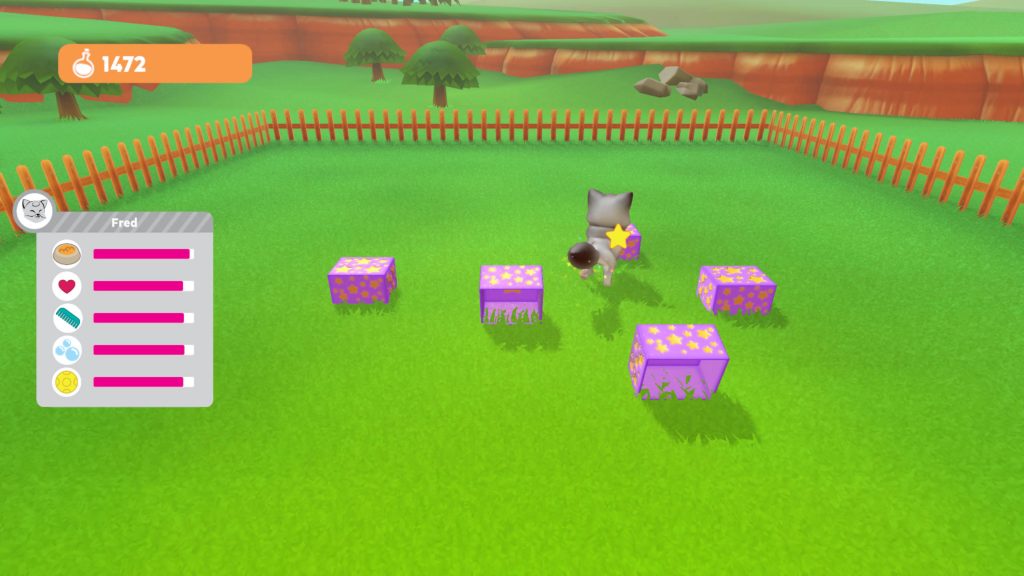 When you’ve bought all the eggs and evolved all of the pets, from that point on it’s all just about maintaining the pets and occasionally responding to requests to weed plants, clean houses or find treasure all of which are very easy to accomplish.  These all earn you more mana which you can spend on customisation items.  If you’re in it for the trophies, you’ll be looking to earn the 137 different skins on offer which will take you at least 5-10 hours.

So with the instructions out of the way, is the game actually any good?  Well, sort of.  Children will enjoy the simplicity of it, as well as the bright, bold visuals and cute pet designs but even then you do see everything the game has to offer after an hour or so and then it is just repetition.  Once you’ve done a loop of all twelve pets and tended to their needs, the first pet in the sequence will be down by about a third on all their levels and so you’ll just do it again and again.  It could soon stop being fun but also the game misses the mark a bit because of how separate they all are.  Pets don’t interact in any way, they all live in separate houses and there are no mini-games that involve more than just one of them. 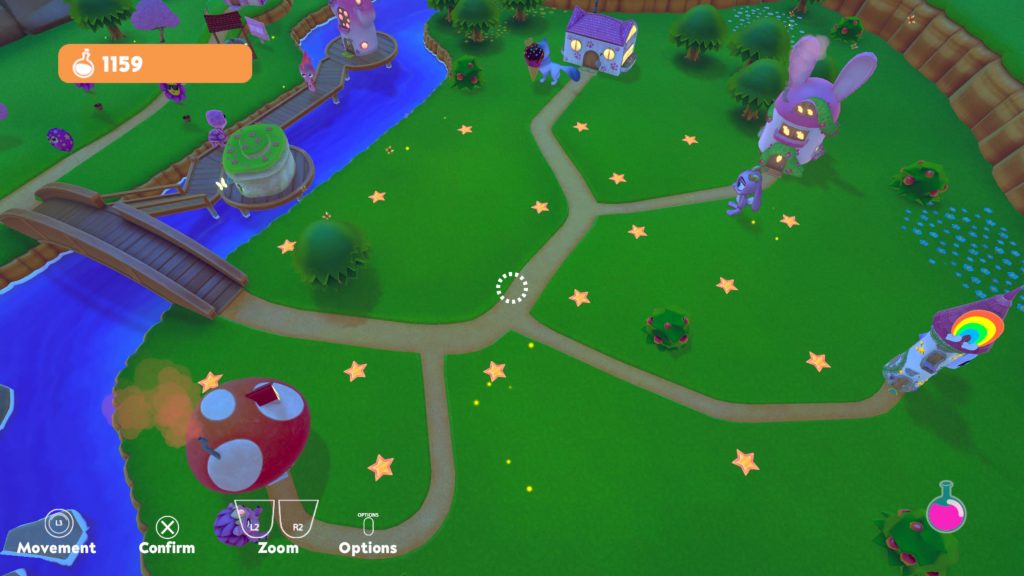 There’s no Viva Piñata-esque cross-breeding which means there’s no scope for creativity (which is at odds with the press release that says “anything is possible!”) or puzzle-solving.  It’s just maintenance really which gives Fantasy Friends the feel of a mobile game, albeit without the microtransactions.  At least everything here is self-contained with no DLCs, purchasable customisations and additional characters although maybe the game would benefit from some extra content.  The customisations that you do get are pretty mild with not much scope for expression.

Another issue is that the game is so simple in terms of its interface, you’d expect things to be perfect but they aren’t.  These are minor niggles for sure but possibly ones that could trip up young kids.  The first is that when the game gives you a task, you get two choices ‘confirm’ and ‘back’ but you can’t select either of them.  You just press

to continue.  When you’re buying skins, you select that option with

or moving the cursor left and then right, at which point

will work again.  It’s just sloppy and speaks to a lack of refinement.  Like we said, minor quibbles but when a game is this simple, you expect things to just work. 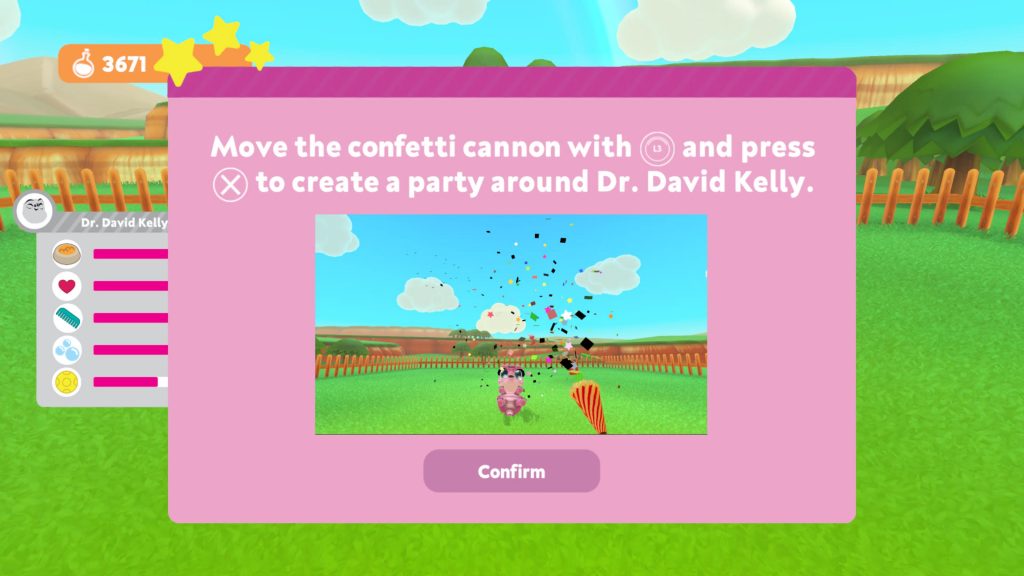 The presentation is pretty good here though with the cuteness turned up high and lots of nice buildings and pets to enjoy.  Some minor texture clipping occurs here and there and the graphics wouldn’t feel out of place on a PS3 indie game but the scene is set well.  The repetitive music is a bit too melancholy for our tastes, with a sad Minecraft-esque lilt to it but overall it’ll be neutral enough for kids.  The sound effects are very basic and there are no voices in the game but nothing jarring either.

That’s really all there is to say about the game.  It has a short gameplay loop that probably won’t keep people hooked for very long but it’s fine for kids.  It’s all basically a very simple version of Nintendogs essentially but not quite as charming or good.  The biggest concern we have is with the price, a staggering £25 which is absolute nonsense given how simple it all is.  But it’ll drop in price eventually and if you’ve got a kid that you need to keep distracted for an afternoon or two, Fantasy Friends will do the job.

Fantasy Friends
5 Overall
Pros
+ Charming enough presentation and characters
+ Each pet has their own mini-games
+ Should be alright for children
Cons
- Very repetitive
- Mini-games are trivial to complete
- No scope for creativity
- Interface isn't perfected
Summary
Fantasy Friends is a simple enough life simulation game for children that offers up some basic entertainment but does begin to feel like work rather than play and doesn't go far enough in terms of gameplay to warrant its hefty price tag.