2018’s Spider-Man was one of the best PS4 exclusives.  Sure, it played much like all of the open-world Spider-Man games (which is to say all of them since 2004’s Spider-Man 2) but it was executed perfectly.  For the record, we gave it an 8 but if I’d taken that review on, I might have scored it higher.  So when Miles Morales was announced as a PS5 launch title (albeit as a cross-gen title with a PS4 review), I was keen to get hold of it.

Much like what Sucker Punch did with the two PS4 Infamous Games, Insomniac have delivered a sequel here that is a cut-down experience from the first title, trimming down the story’s running time to just a few hours and reducing the number of side-missions and collectibles too.  It’s a standalone title but one that feels a little like it could be a piece of DLC, albeit a fairly substantial one.

It focuses on Miles Morales, another New York kid who gets bitten by another New York spider and gets superpowers.  That occurred at the end of the previous game and, after a little pep talk from Peter Parker, Miles takes on Spider-Man duties while the original goes on a trip abroad.  Now, despite me loving the previous game, I can’t claim to be a huge fan of Spider-Man as a character (I can take or leave the films and comics) so already I was a bit confused as to why he even calls himself Spider-Man but whatever, once the costume is on, you’d be hard pressed to see any difference. 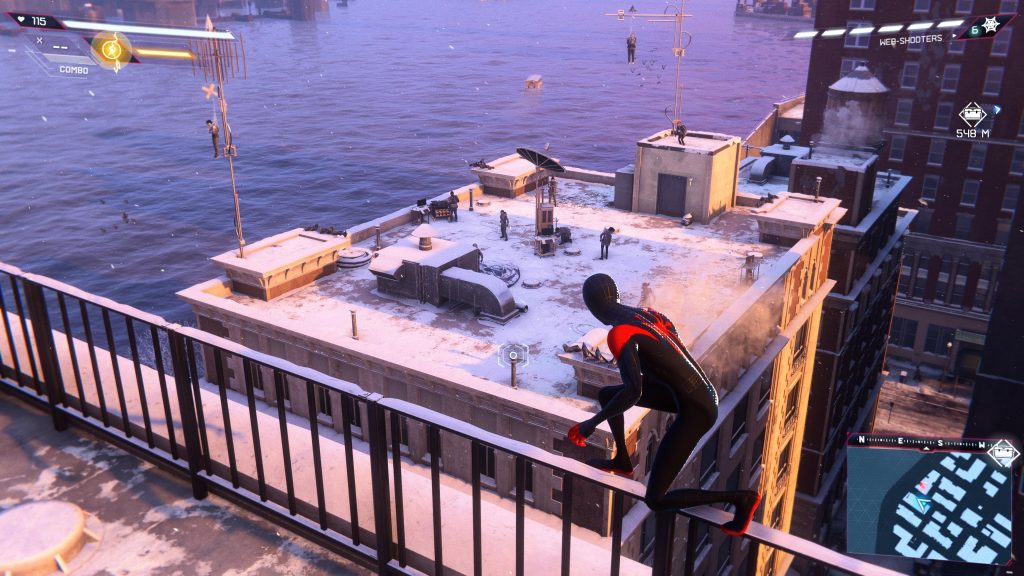 That is until Miles discovers a wrinkle to his abilities, one that involves being able to produce bio-electricity which he (confusingly) calls Venom.  However, from a gameplay point of view this new power is handy as it allows you to store up power and unleash it in powerful strikes to turn battles in your favour.  It also adds a puzzle-solving mechanic where Miles uses electricity, usually to open up doors or power up generators.

Outside of his Spider-Man persona, Miles is a likeable kid.  We saw how his father was killed in the previous game and now he lives with his mother, a community-focused politician called Mia, and hangs out with his best mate Ganke who acts as a bit of a sidekick (as well as inexplicably being able to hack open doors remotely in highly secure corporate facilities but that’s just a bullshit modern film/TV trope that gets used too often).  That is when he’s not out stopping criminals of course. 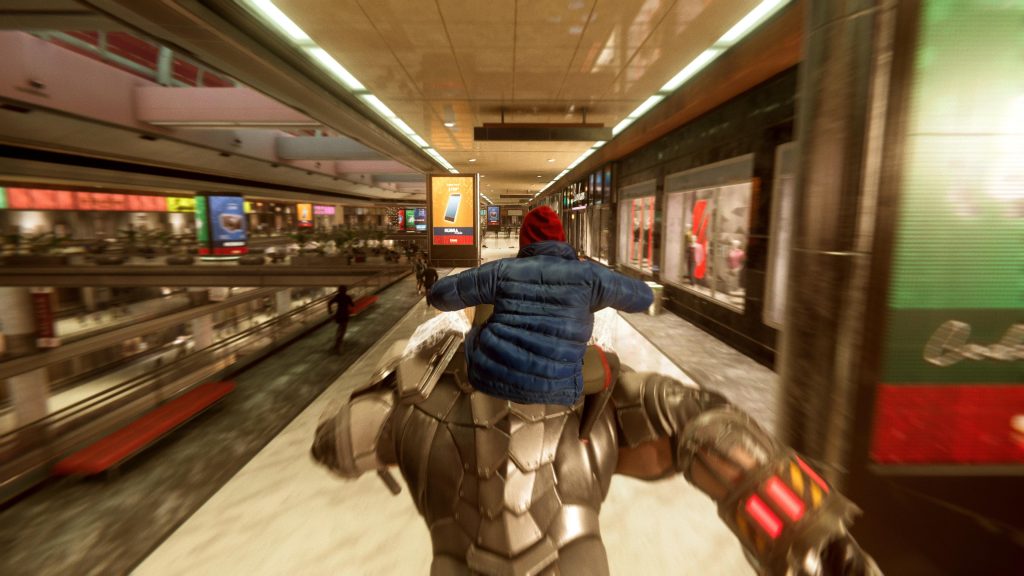 We catch him early in his superhero career which means we get to see him develop into his powers.  This is nicely represented as he clumsily swings through the city until you level him up and his technique improves.  Along the way, much like in the first game, you’ll upgrade your suits, powers and moves which will help you cope with the significant challenge that awaits.  Also, similarly, he has a lot of moves in his arsenal echoing the move set from the 2018 title with lots of moves that focus on solo targets, groups, aerial attacks and so on.  You can also focus on stealth if that’s your thing, and it was for us and it still works brilliantly.

In reality, Miles Morales is in a lot of respects the same game as before.  For Peter Parker read: Miles Morales.  For Oscorp read: Roxxon.  New York remains the same, albeit coated in a festive layer of frost.  You’re still dealing with escaped criminals as you swing around the city and you still have powered up mobs courtesy of Roxxon and ‘The Underground’ who are a shadowy criminal gang who are teched up to the eyeballs with super-weapons. 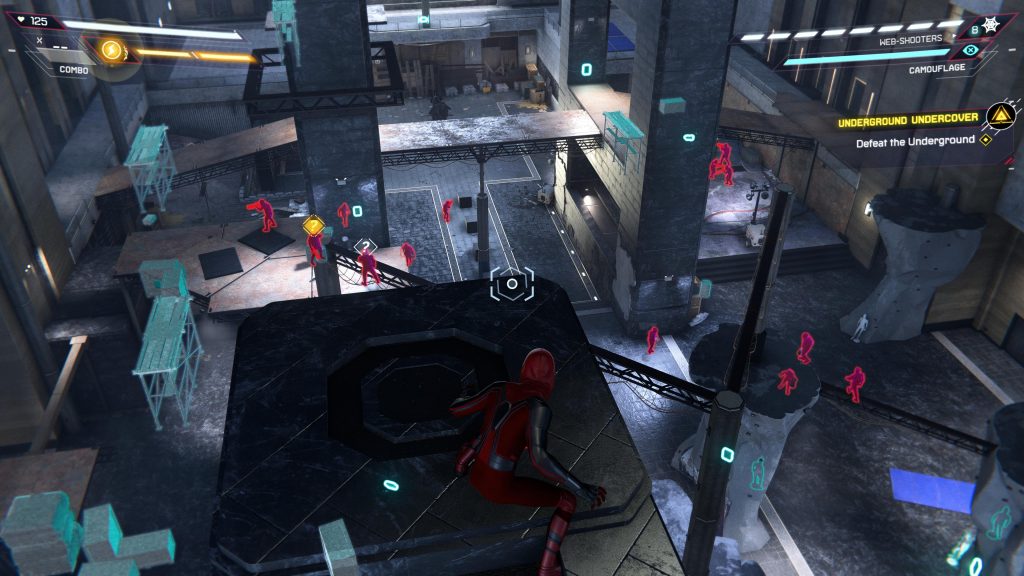 The main differences are what they’ve taken away.  Instead of a greatest hits of Spider-Man’s enemies, we only get Rhino now while the main bad guys are an obnoxious Bond villain type called Simon Krieger (a sinister Steve Jobs who looks like Jeremy Renner) and The Tinkerer who heads up The Underground (possibly one of the most annoying characters we’ve seen in a game).  But that’s okay because Miles Morales‘ edited run-time makes for a more focused game.  It doesn’t need to be any longer than it is (although you may baulk at paying full-price for it).  Personally, we felt that the trimmed story was just about the right length for this game and while it is still stuffed full of icons on the map, it’s not nearly as collectible-heavy as the previous game.  If it was any longer, it’d just be padding anyway.

The good news here is that everything that made the previous game great is in place here.  Mainly that comes down to the swinging which is just absolute perfection and the combat which gives you so many tools but never overwhelms you with choices.  Switching from stealth to all out combat and back again works great.  Sometimes you’ll pick off enemies from above with stealth takedowns and other times you’ll be diving and somersaulting around a dozen foes, dodging attacks and countering with fierce combos.  It flows and it’s still some of the best melee combat you’ll find in all of gaming. 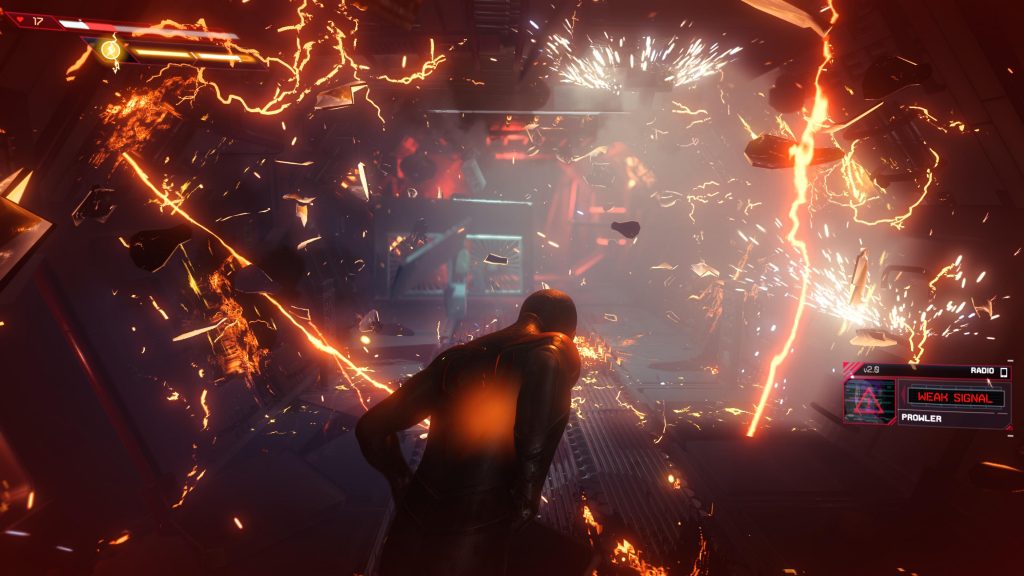 The other real highpoint is the presentation which can only be described as immaculate.  Spider-Man was one of the best looking games on PS4 and Miles Morales is a stunner on PS5.  It just looks so nice.  The character models, faces, animation and combat effects look so good but the real star is the city itself.  New York in the snow looks detailed to a ridiculous degree.  We played a few hours in ‘fidelity’ mode eating up all that lovely raytracing but even in ‘performance’ mode, the game looks stunning and really benefits from that silky smooth 60FPS frame rate.  I’ve personally never cared about that sort of thing but when you see it in a game like this, you realise what all those PC gaming bores have been gloating about for all these years.  The game’s sound is great too with decent voice acting performances, plenty of music and a city that just sounds alive.

When reviewing launch titles, it is easy to get overly enamoured by the tech but Miles Morales has the gaming chops to go along with the drop dead gorgeous visuals and it feels like an essential title for all PS5 owners.  We’re not sure that PS4 owners necessarily need to bother unless Spider-Man and its two DLC packages weren’t enough for them though.  This is still substantially similar to the previous game after all.  But a couple of years later, we’re happy to revisit the friendly neighbourhoods of New York City and as similar as this game is to the original, with an original that good, a bit of copying and pasting is forgivable.  We’ll be hoping for something truly new and innovative for the sequel though.

Spider-Man: Miles Morales
9 Overall
Pros
+ Astonishingly pretty
+ Great game mechanics and combat
+ Is just about the right length
+ Decent story
Cons
- Very similar to the previous game
- Quite pricey for a shorter game
- Some annoying characters and cliched plotlines
- Still a little padded with collectibles
Summary
It may not offer anything substantially new compared to the 2018 PS4 Spidey game but Miles Morales plays great and looks even better. Miles himself is a likeable hero (albeit it with some annoying co-stars) and the open-world action is just as enjoyable as ever. It's a bit pricey for what you get but the game benefits from the shorter run-time.