What an odd thing this is. With 2020 being what it is, you’d be forgiven for seeing a sports title skip a year. Sadly, contractual agreements being what they are, sometimes that’s not an option. With not a whole lot of fanfare, the imaginatively titled eFootball 2021 Season Update, arrives on digital shelves. For a cut price, my expectations were firmly set but does this still manage to offer any surprises? 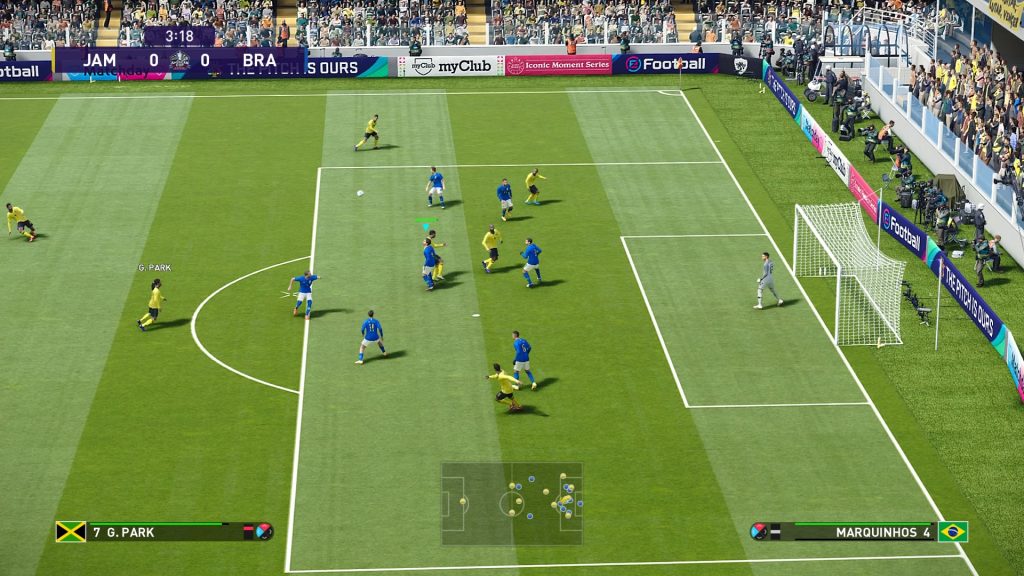 On the face of it, the content remains the same as last season. The same leagues return with the only change coming in the form of Columbia’s top flight now being licensed. UI elements have been refreshed and seem to fit in with the UEFA 2020 presentation. That tournament returns fully licensed, meaning that all of Europe is represented with official kits. With that comes Wembley and the Gazprom Arena in all their respective glory. Again, it became part of last season’s package so raw, new content is very tough to find. All the other modes return largely unchanged. Master League sees no significant additions, although you can now manage as Ryan Giggs or Frank Lampard.

Are the teams up to date? Out of the gate, no. PES Production’s line-ups have always lagged and I imagine the offset transfer window makes things even more difficult. Until you find an option file, the world will be firmly stuck in August 2020 with many of the game’s biggest transfers yet to hit. There’s an irony to a seasonal update being out of date but it’s nothing new for the series. Data packs will naturally come to coincide with the end of the transfer window but, for the time being, option files and work from the community will have to pick up the slack. 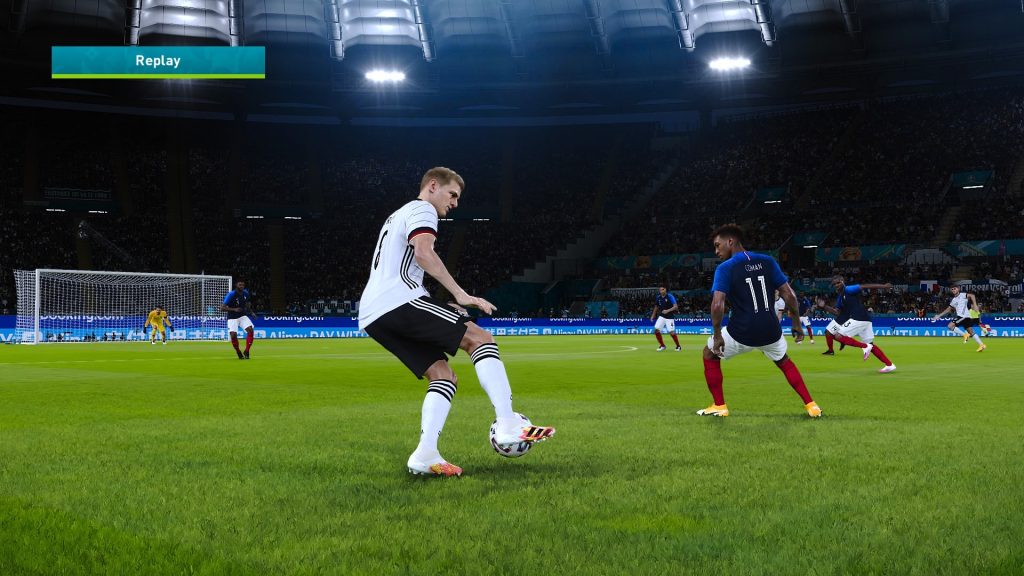 So if the content is largely stationary and the database isn’t up to date, just what is new for eFootball 2021 Season Update? It’s all on the pitch. Playing this does not feel like last year’s game with a new coat of paint. There’s new animations and new behaviours that give this season’s effort a weightier, more physical sense. It’s not overbearing but delivers a more scrappy midfield game as you just need a little bit more time to steady yourself and send out a pass. As someone finally getting used to the more snappy predecessor, it takes some getting used to.

There’s a new collision system that, for the most part, behaves. Players will lose their footing, battle for position and generally show more fight on the pitch. What I’ve also seen is how easier it is to get a long-range effort off. In the past, I felt the AI was tuned to block those out of existence but now you can manufacture those chances better. Defending free-kicks from close range don’t feel like the death sentence they once were and, whilst some will still smash in, goalkeepers and defensive walls can offer some resistance. Keeper animations look especially impressive. It’s great to see them really stretch to keep efforts out or improvise a save with their feet. 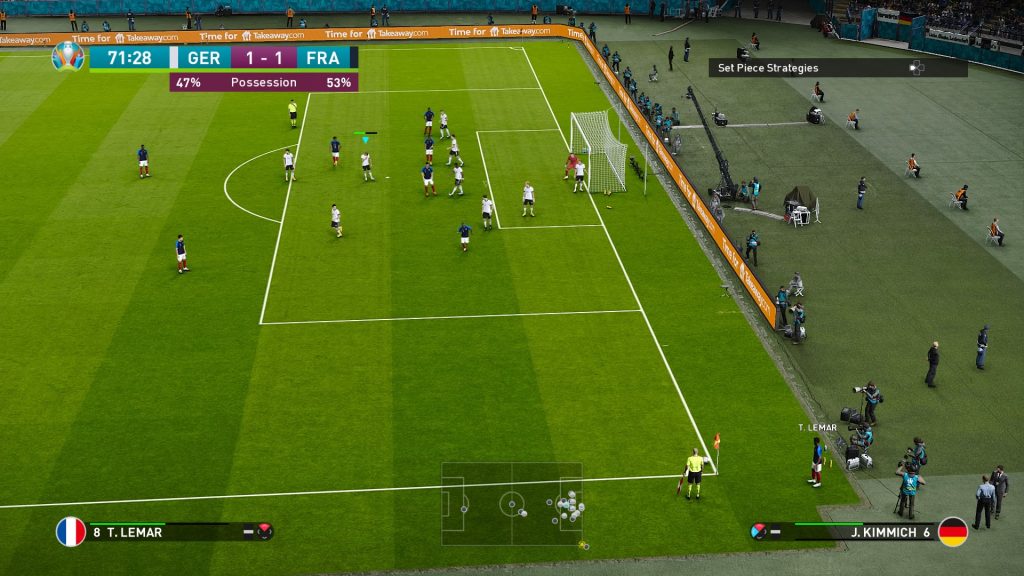 It’s been fascinating to pick the match engine apart and see new things crop up. Coming up against the big teams, I’ve not felt trapped in a vice and have been given time on the ball to play. I still lose but that’s mainly due to some teams being more effective on the counter. The change in tempo has me thinking about things in a different way and it’s refreshing, given how I was anticipating an updated version of last year’s game.

Modes remain fairly untouched with Master League, Become a Legend and MyTeam retaining the same tried and tested structures. As a single player devotee, this is a shame but the changes on the field might be enough to maintain my interest. One thing I will say is I’ve noticed some fairly big transfers happen in Master League that seem realistic. Kylian Mbappe moving to Barcelona makes a lot of sense whilst Firmino moving to Manchester City is less so. Budgets and prices still feel a little out of whack. 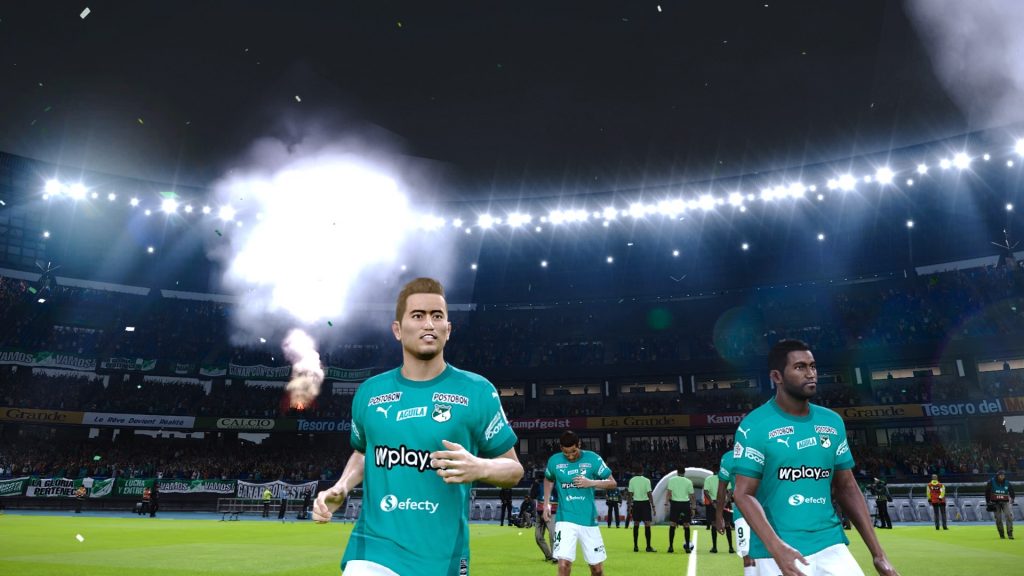 Presentation remains fairly stagnant. Commentary appears to be the same tired lines from last year and, whilst Peter Drury’s enthusiasm and shouting livens up a game, you’ve heard it all before. The partnered clubs retain their little flourishes from stadium flybys to the scenes in the tunnel. Visually, it all seems familiar with the same scenes playing out and very little you could point at and declare it new.

PES Productions set expectations accordingly with eFootball PES 2021 Season Update. Whilst it’s a compromised package, the lower price tag and title don’t quite tell the whole story here. The content feels unchanged and the presentation stagnates for another year but the actual football has seen some meaningful changes. The change in tempo adds its own learning curve and the new animations lead to a more competitive scrap. It’s still compelling but it falls short of feeling like a more complete sequel.

eFootball PES 2021 Season Update
7 Overall
Pros
+ Plays a very engrossing game of football.
+ AI plays intelligently but can also crack under pressure.
+ Plenty of content to play.
+ Goalkeepers feel more aware and will improvise saves.
Cons
- No new teams or leagues on offer.
- Online and offline Modes are largely unchanged.
- Presentation and commentary feels stale.
- Doesn't feel like a fully-fledged sequel.
Summary
With a name like eFootball PES 2021 Season Update, I was expecting last season's game with updated leagues and kits. Cosmetically, it's exactly that but the action on the pitch has seen some interesting changes. The matches are a touch more physical and new animations show that some work has gone into the engine. It plays differently from last year and is compelling to learn. Away from the pitch, things feel largely stationary and it's clear that's where the compromises lie. I enjoy it but it's clear this falls short of feeling like a fully-fledged sequel.