Spellbreak is the latest online-only battle royale contender to take on Fortnite and is out now on PSN as a free-to-play title.  It comes from Boston-based devs Proletariat Inc and is a cross-play title which allows you to continue your progress across the various formats (including the Nintendo Switch).

The obvious comparison is with Fortnite in so far as it has a vaguely cartoonish look and you get the whole closing circle of doom thing from PUBG but Spellbreak‘s gimmick is that you play as a mage.  A brief tutorial, which does a good job of explaining the core mechanics, you’ll be free to pick a game mode.  The game currently supports solo, duo and squads (of three players). 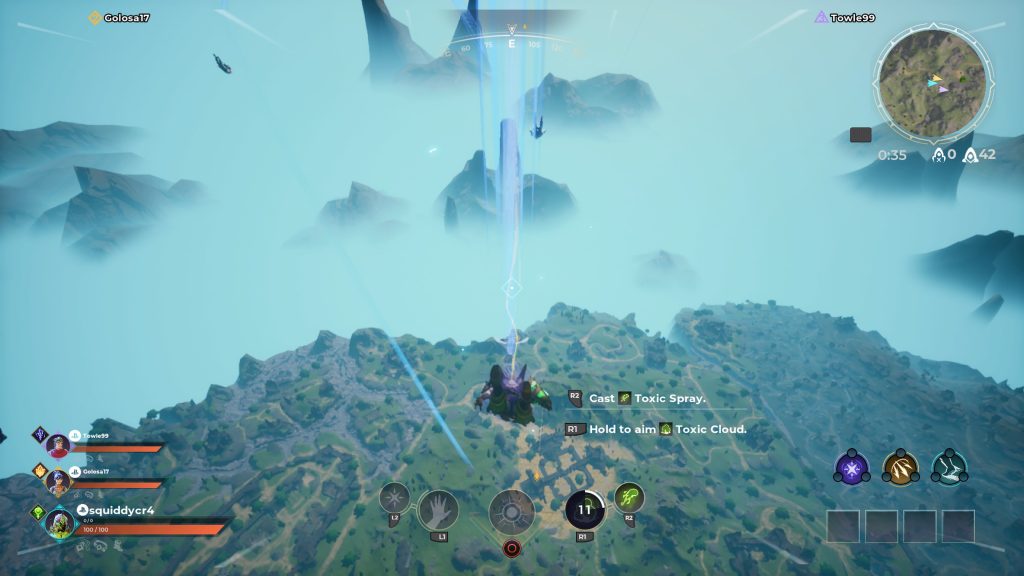 As with other games in this space, you’ll pick a character class (basically your damage type) and then you’ll drop into the map from the air.  So far, so familiar.  But the mage aspect to the game is what sets this apart.   Your class will dictate your weapon spell (fire, ice, electric, toxic and so on) and then you’ll run around trying to find the pick-ups that litter the area.

These items can grant you a second weapon type and this is where Spellbreak has its best idea, you can mix damage types.  So, for example, you can cast a toxic cloud and as that’s doing damage you can ignite it with a fire spell.  There are a load of combinations to explore and it all works well, echoing the system Magicka uses.  These attacks are mapped to the left and right triggers and shoulder buttons so there’s a real feel of you having power in both hands. 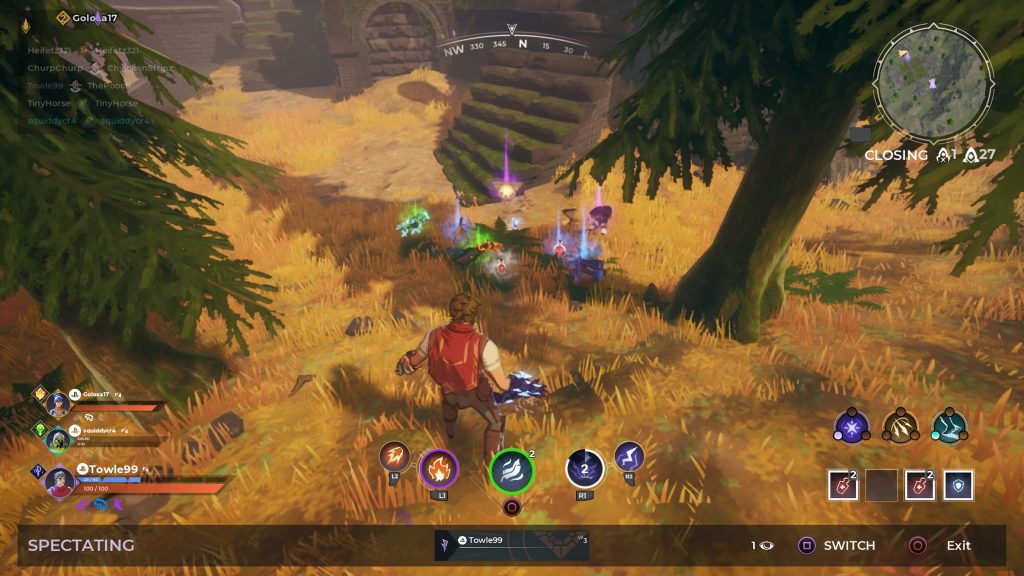 You can also pick up gear to improve your speed, defence and so on and runes that give you abilities with cool-off periods such as a handy ability to locate other players or the oft-used flight ability which will see people flying all over the place because that seems to be the most popular one.

Once you drop in to the world, you’ll have that Fortnite-esque experience of running around for ages without seeing anyone before eventually running into people when half the field has been eradicated.  Combat is pretty tough as the playerbase seems to like to move around a lot.  You also have a mana pool which is easily depleted.

In terms of accessibility and pace, Spellbreak is very beginner-friendly.  You won’t be wrestling with complicated systems and tons of currency systems.  After playing many, many hours of Dauntless the clarity and simplicity here is quite refreshing but that comes at a cost when it comes to depth.  The game is accessible sure, but there’s not a lot of reason to keep going. 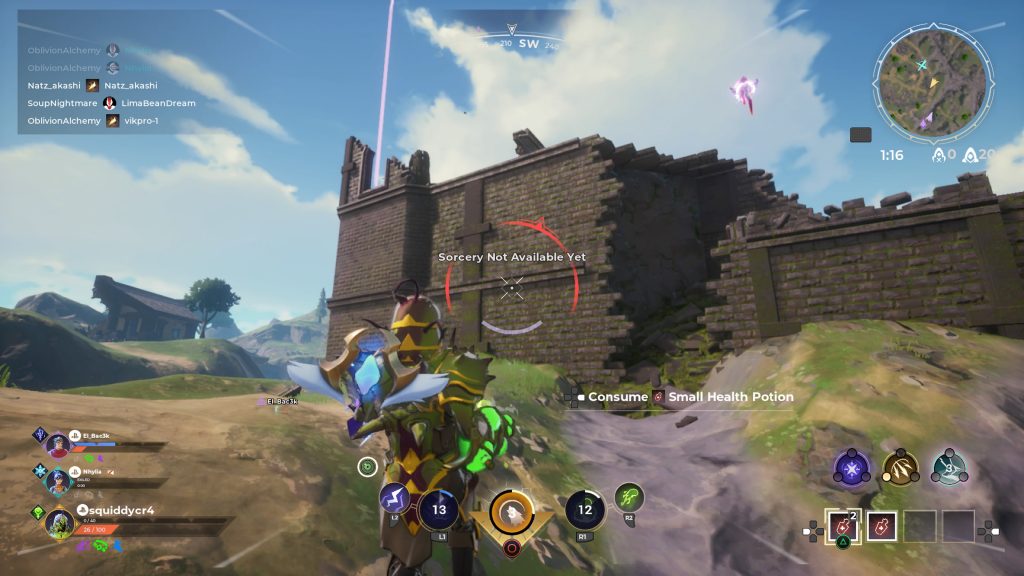 Battles are frantic but also can be confusing, I wasn’t always sure who was an enemy and who wasn’t (especially when people on my own squad were happy to kill me rather than rescue me) which is a problem given that friendly-fire is a real thing.  The player base is like any other F2P one, so don’t expect to make any friends.  Playing in solo mode was much better than squadding up with randoms.

The game does pull a bit of a fast one on you.  You’ll likely win your first game.  This isn’t because you’re a natural but rather because the first game is all bots set to ‘dumb’ but the illusion is welcome as it gives you a bit of belief.  Subsequent games against experienced players will be a lot harder, trust us.

While we like the core gameplay there maybe is too much emphasis on picking up tat and it’s not always particularly clear what you’ve got and what you’re about to pick up.  If you can avoid trouble, you can definitely gear up and give yourself an edge but it all felt a bit random at times and takes your eyes off the prize. 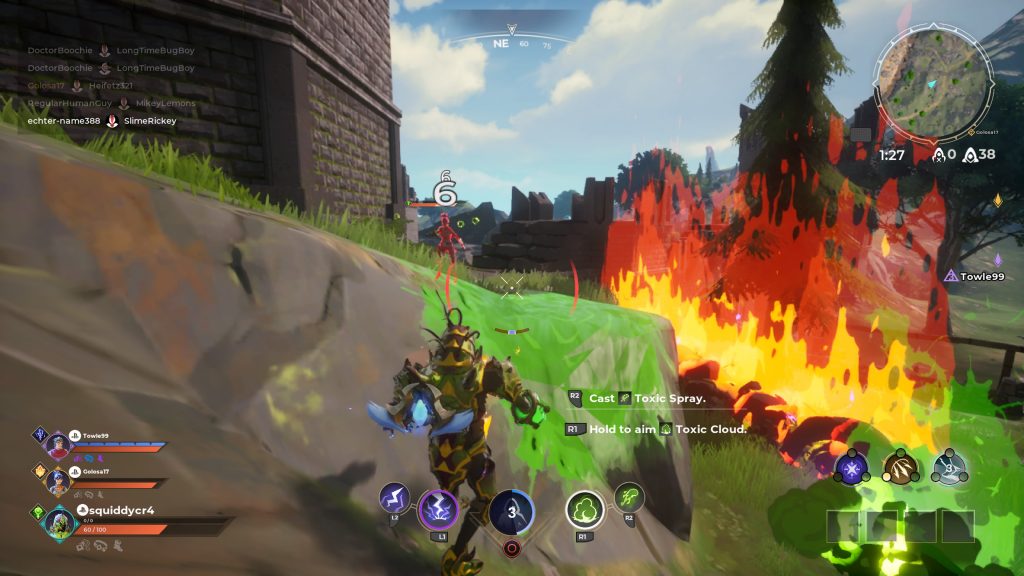 However, the game’s fast pace and clear, slightly-cartoony graphics make this a valid alternative to the big guns in the genre.  PUBG, Warzone and Fortnite won’t be the competition here, those games can fight among themselves but Spellbreak offers a different enough spin to make it stand alone.  That said, it doesn’t do much to keep your attention.  The rewards of progress are cosmetic items.  The can be bought with real money but we were surprised to see how bare the in-game shop was, offering just a couple of outfits and a handful of accessories.

There doesn’t seem to be much in the way of customisation either so unless you find the battles absolutely riveting, you may find the appeal of Spellbreak wears off pretty quickly.  No doubt the game will get supported but currently the bland grassy setting and limited game modes meant that the fun wore off pretty quickly for us.  But the game will be good for quick pick up and play sessions at least, even if that might put you at risk of being dominated by obsessives.  Either way, as a free game with no pay-to-win nonsense, you can’t go far wrong here.

Summary
If Spellbreak gets continued support it could be a contender but for now this fairly limited F2P battle royale game isn't bad.