We’re big fans of ’80s action movies here at PlayStation Country and clearly so are Romanian coders Killhouse Games because Door Kickers: Action Squad is very much a love letter to the classic Arnie/Willis/Stallone films of that era as this game mixes tried and tested retro presentation with scenarios that feel completely inspired by that era.

In this game you and a buddy (online and offline) play as SWAT officers who need to enter each of the bite-sized levels and rescue the hostages while killing all the bad guys.  A star rating system is in place and if you manage to kill everyone except the hostages then you’ll get the three star rating but if you accidentally kill any of the, rather fragile, hostages then you’ll start to drop stars. 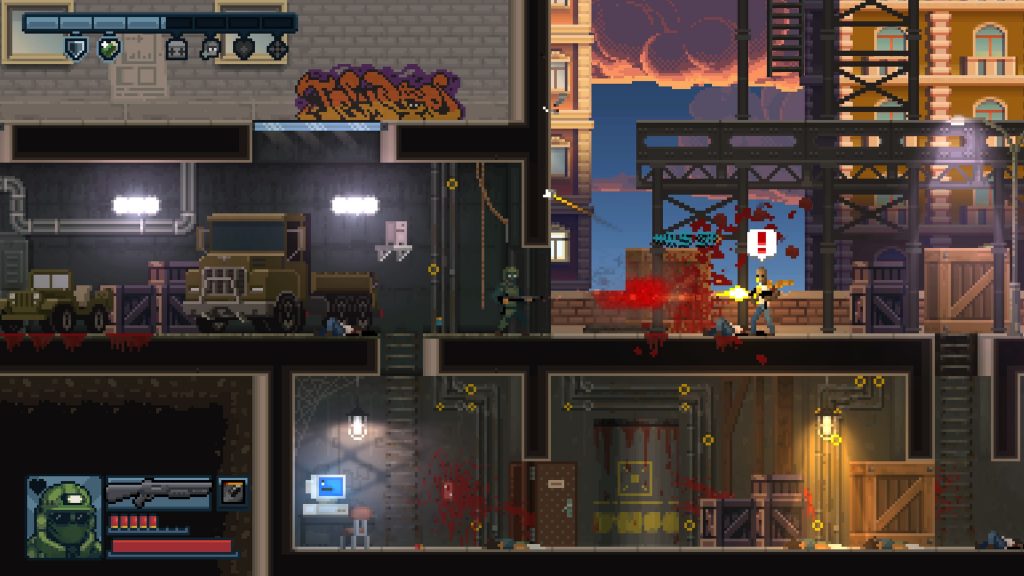 This is Door Kickers‘ greatest strength.  Each level is short and easy to pick up and play but they do present scenarios where you have to figure out the best way to safely clear rooms.  Sometimes you can plan for this, figuring out the way forward.  So, for example you might decide to knock on the door to bring the bad guys to it and then set off a breaching charge to kill them.  Other times you may not have that option because a hostage is too close and so you might go around and pick off enemies from a window.  Each level presents several tricky scenarios and these get even harder in rooms that you aren’t able to look in until you breach. 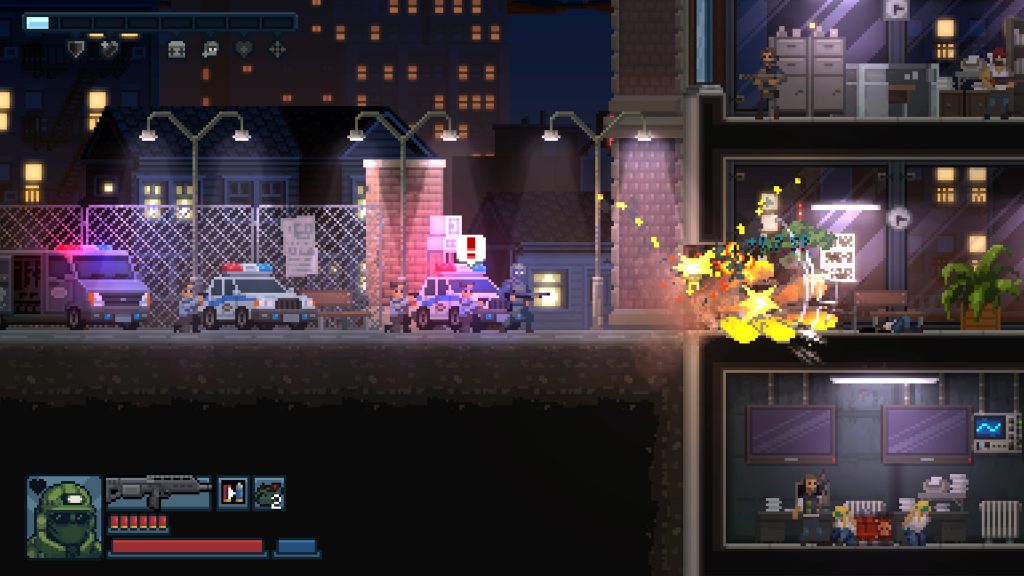 Finishing levels can be tricky but finishing them perfectly is much harder but you do make progress.  You do get upgrade points that can be used to beef up your arsenal and can be spent on improving health, fire rate and reload times as well as extra bonuses such as more gear or improved medkit usage.  This is great because you can re-spec easily and the upgrades are helpful but the game always offers a real challenge because death can come so quickly.

In that way the game feels a little like Deadbolt (especially as it shares similar gameplay and visuals) or Hotline: Miami but, for us at least, is the best example of this type of thing.  The short levels, intense action and genuinely tactical nature really make Door Kickers something special.  Even when the level layouts feel frustrating and a little unfair, they are beatable even if breaching a dark room to find a guy stood right by a hostage can feel unfair when you’re going for those three star scores. 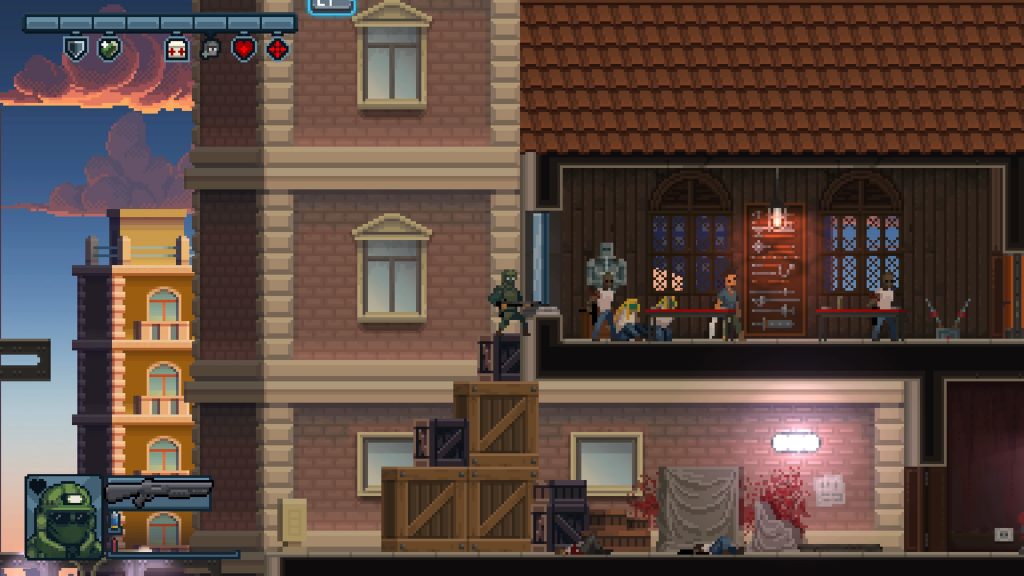 Interestingly, the game doesn’t use difficulty levels but rather gives you various classes that all have different abilities and weapon types that inherently make the game more or less difficult.  The easiest is the Breacher who is powerful and has some very deadly shotguns (although these can be a liability when clearing hostage rooms) but there are also Assault, Shield, Recon and other classes too including Agent Fergie who is melee based and therefore a nightmare to play as.   We would have liked to see more balance to these classes but the variation is nice and progress is shared between them.

Now we, like most of you, are pretty bored of the whole retro pixel art way of doing things that so many indie efforts have these days but we do tend to soften this view when people make games that look like something from the ’90s but play better than any SNES or Megadrive games ever could and that’s the case here.  There’s a lot of detail in those chunky pixels and the game does manage to show some real character, especially when combined with the ’80s synth music, and the action is always clear and so we can’t really complain.  Apart from maybe a Shadow Complex look, we can’t see this game working all that well in a modern graphics style. 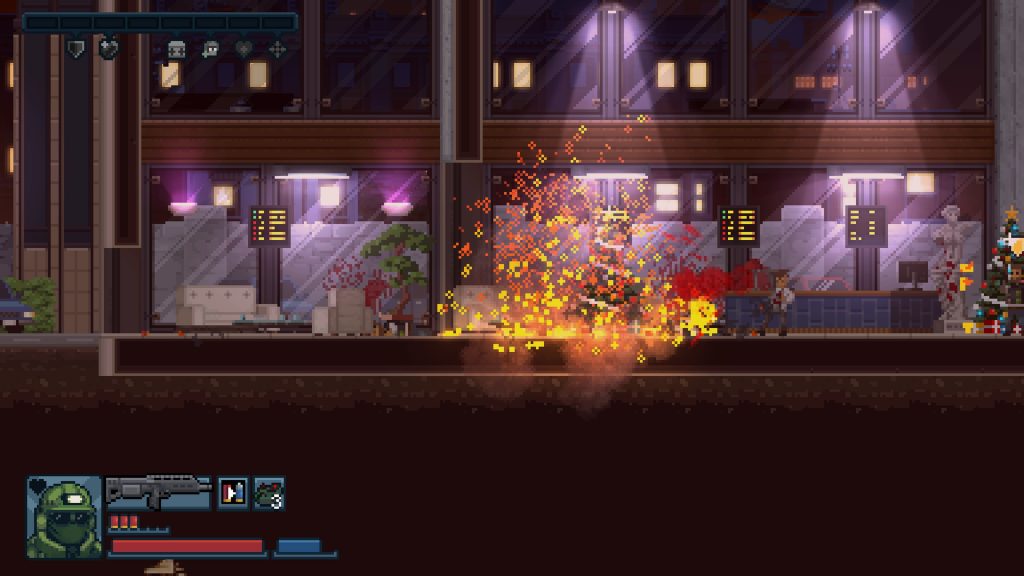 Aside from several chapters, each containing twelve levels, you also get the option to play these with added zombies (which don’t really add much apart from more enemies and there is also a Die Hard inspired infinite tower mode which keeps on going with randomly generated towers but where the main game levels are very tightly designed, the game suffers when you randomly generate the levels and so this mode is a lot harder.  But the additional content is appreciated.

Overall, Door Kickers has really surprised us.  It’s a well-presented, excellently designed and highly enjoyable tough little shooter that has enough of a tactical edge to make it stand out from the usual Contra and Metal Slug style games that dominate this sub-genre and we really appreciate that.  The short levels also make this game perfect for quick play sessions and so if you want a game that you can lose hours to or just dip into, Door Kickers is a great choice.