Released on PC a couple of years ago to critical acclaim, Disco Elysium has now hit the PS5 (the focus of this review) and PS4 in a Final Cut version. This has added new voice lines, more dialogue choices and more items to collect but that won’t mean too much to those who haven’t played it previously. What you need to know is that this is a fantastic game and although it was released in a rough state the patches have been coming thick and fast. 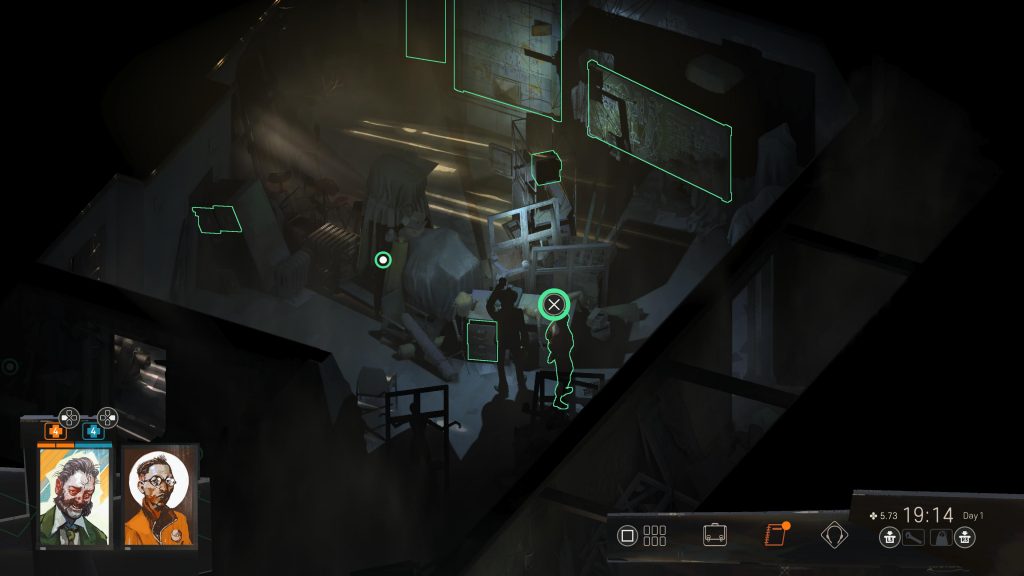 You start Disco Elysium as an incredibly hung over detective. You can’t remember that you’re a detective, or even who you are for that matter, but depending on the type of character you’ve created can start piecing things together slowly in a haze of regret. There’s been a murder in the town of Martinaise and you’ve been sent to check it out with a partner from another precinct. Again, you don’t remember this but you’ll figure it out. This opening allows the player to play the detective as they wish. You have to work within the rules of the game of course but this is a blank slate to mould as you desire.

I started with an intelligent cop, not with any sort of plan but you can also choose from a more physical specimen, someone with a more psychological approach who is good with people or you can mix and match your own. Within that you can be professional or less so. What transpired for me was an Adrian Monk or Dexter-like eye for detail which allowed my character to deduce situations with insane accuracy and have an encyclopedic knowledge of almost everything. Apart from himself. He was neither strong nor particularly good with people however. He could look at a mess of footprints and figure out the number of people and their physical make up but couldn’t intimidate his way out of a paper bag. Oh and he was clean, never touching alcohol or drugs again. 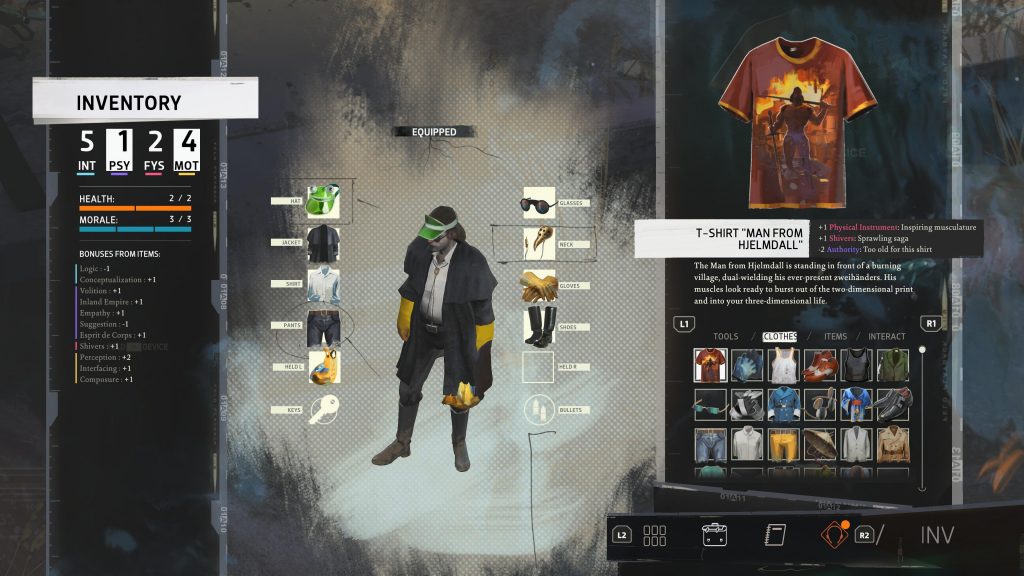 Although it has these RPG trappings, including experience which you can use to level up and find clothes that will increase and decrease certain stats, Disco Elysium plays more like a point and click game. You walk around finding people to talk to and objects to inspect or pick up. Talking to people opens up choices of what to say, which will lead to more choices and more again. Some of these choices will be hidden behind skill checks. You can still attempt them and the percentage chance given to succeed does seem legitimate with lower chance ones sometimes succeeding and higher chance ones sometimes failing but you won’t be able to cover all the bases, generally speaking. If you can’t convince someone of something with words then you’ll have to find another way to get information out of them, like doing them a favour or finding irrefutable evidence.

Here’s where Disco Elysium‘s strength lies, it has to be one of the most immersive games I’ve ever played. I embodied this detective, using my (character’s) smarts to figure things out, follow leads, piece together clues and get to the bottom of this murder. Sure, I got sidetracked by minor side cases, much to the dismay of my partner, which is a very gamey thing to do but I didn’t sway from the character that had developed from the start of the game which is very unlike me. I’d normally do whatever it took to clear that quest log, whether it was going totally off character or save scumming to get what I wanted but here I didn’t feel the desire to nor did it feel necessary. 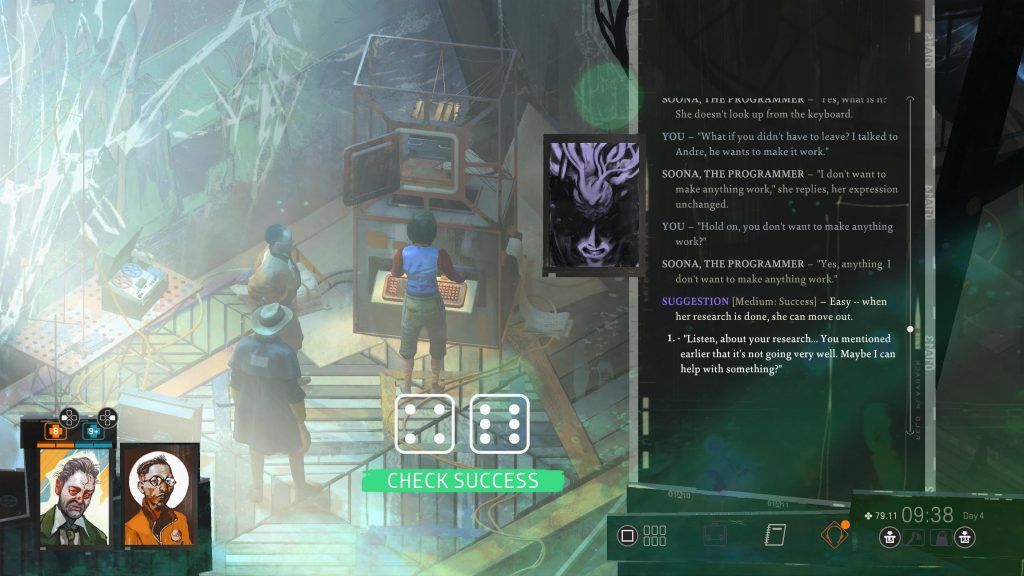 Time passes as you talk to people and during set events and the game takes place over many days, with new elements appearing as you move forward. There’s far more at play than just this murder mystery, with political struggles, domestic issues and even some paranormal phenomena. This leads to a lot of conversing both with characters and yourself, with different facets of your personality chipping in often. Possibly too often for some people as there is a huge amount of dialogue, most of it incredibly well written and with decent voice acting. I didn’t mind it for the most part, going along with it and enjoying the ride but there were some conversation threads which did waffle on without much pay off for me.

Visually things are very attractive. Not necessarily technically impressive but the backgrounds have a painted quality to them and the various colourful characters fit into this world perfectly. To go with the good voice acting you get the odd bit of music as you move through the world and that too is of a high quality. You can’t knock the presentation as a whole.

The character is controlled directly with the left stick, rather than with a mouse pointer as was the case with the PC release. You then use the right stick to highlight objects around you to interact with them. It’s an okay control scheme and you quickly learn to deal with its limitations although at times you will select something and the game will accept the input but your character won’t do anything. Selecting it again works, it’s just a common occurrence to have to do it more than once unfortunately. As I stated in the opening paragraph that’s the least of the problems however. 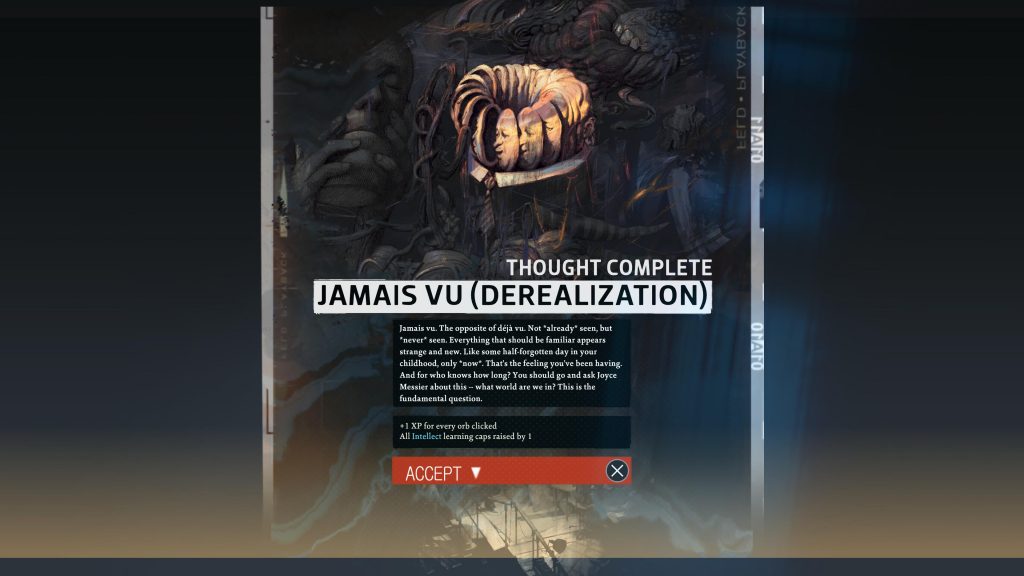 It’s weirdly slow loading for a PS5 game. Not glacial by last gen standards but I believe it’s the slowest loading game I’ve played on the new system at about ten seconds when you move between areas. The PS4 version is maybe slightly slower, but they are about on par which shouldn’t be the case. Sometimes the wrong voice line will play for the dialogue as well, but it gets worse.

[Post-patch edit] Multiple patches have already dropped, seemingly fixing the major broken quests that I had noted which is a quick turn around and I’m sure there’ll be more soon enough as it’s still not perfect. Upon loading a game I’ve had NPCs not appear or they aren’t interactive. A complete restart of the game has fixed it but it’s worrying when it happens and the game has autosaved in this broken state a few times for me so make sure you have those manual saves on hand. 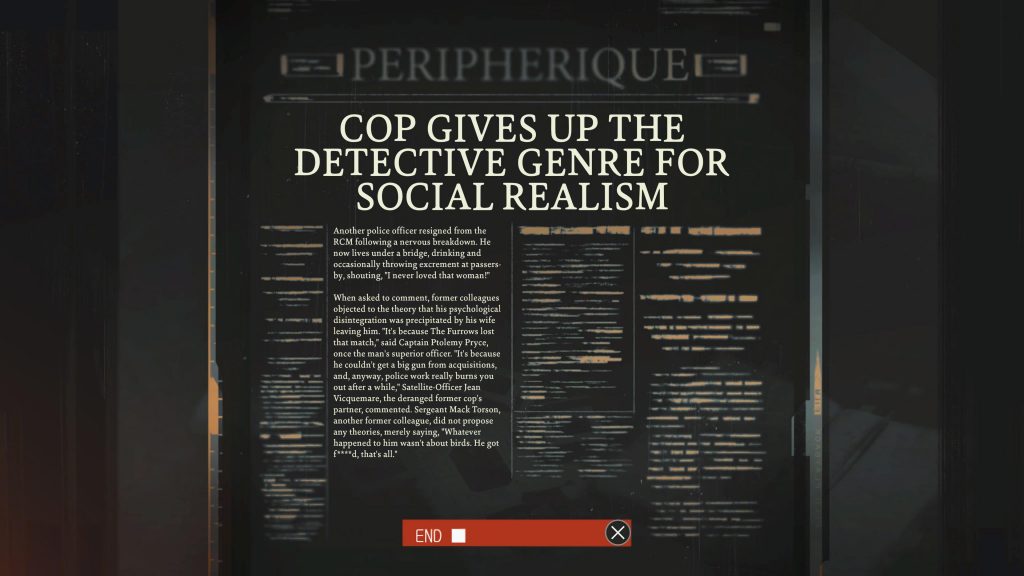 So it’s less broken than it was, from what I can tell the quests work now but there are still some annoying issues. It’s a great game without a doubt and once they fix everything then it’ll be one of the best games on the system but until then this is an incredibly enjoyable game, just not quite as good as it deserves to be. I’m going to score it as I was going to when everything was going smoothly as the speed the developers are patching it I’m sure it’ll get where it needs to be sooner rather than later.

I’ll continue to update the review as things get better and I’ll be watching the patches for Disco Elysium: The Final Cut like a hawk, I want to play through as an intimidating idiot cop as soon as I can.

Disco Elysium: The Final Cut
9 Overall
Pros
+ Incredibly immersive
+ Fantastic writing
+ Great visuals
+ Some decent replayability too
Cons
- Some of the conversations do go on
- Some really bad bugs on release [mostly fixed now]
Summary
Disco Elysium: The Final Cut is a fantastic game, especially now the major bugs seem to have been squished. It's one of the most immersive games I've ever played, has great presentation across the board and once all the issues are patched out it'll be superb and unmissable.