I’m back once again playing visual novel roulette and the latest bullet for me is C14 Dating by Winter Wolves. My previous knowledge of the dating simulator genre is fleeting but the slimmed down stat tracking and emphasis on friendship does make this more palatable to me. Set amid the backdrop of an archaeological summer school in Belgium, this looks to at least offer something slightly different in a genre I’ve never been big on. 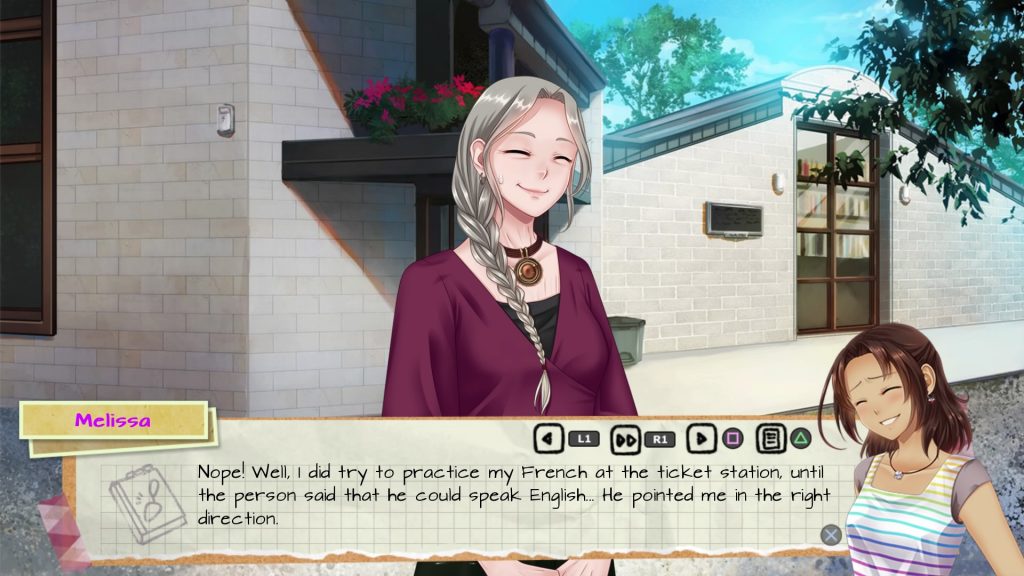 C-14 Dating‘s story is a fairly laid-back tale of a summer abroad. You play as Melissa Flores, an archaeology student who’s studying in Belgium. Away from home, she quickly makes friends from the half-a-dozen other students she meets. These people function as the game’s love interests or opportunities for friendship. With this in mind, everyone is fairly cordial to one another and it leads to some fairly accommodating conversations.

Each character are different nationalities which allow for some fairly easy cultural exchanges. They all have different personalities from Deandre, the jock to Shoji, the anime nerd. Whilst this does allow you to pick your poison for romance, nobody really clashes throughout the story. There feels like precisely no conflict and it all just leads to a cast that are politely queuing up for friendship or love.

It’s a shame the setting isn’t used to it’s fullest. Whilst Belgium offers some opportunities for characters to spit some basic French out, the game’s entirely fixed within some small locations. There’s a little village where the summer school is carried out, a lakeside scene and very little else. It feels a little confined and doesn’t really stretch out into digital tourism. 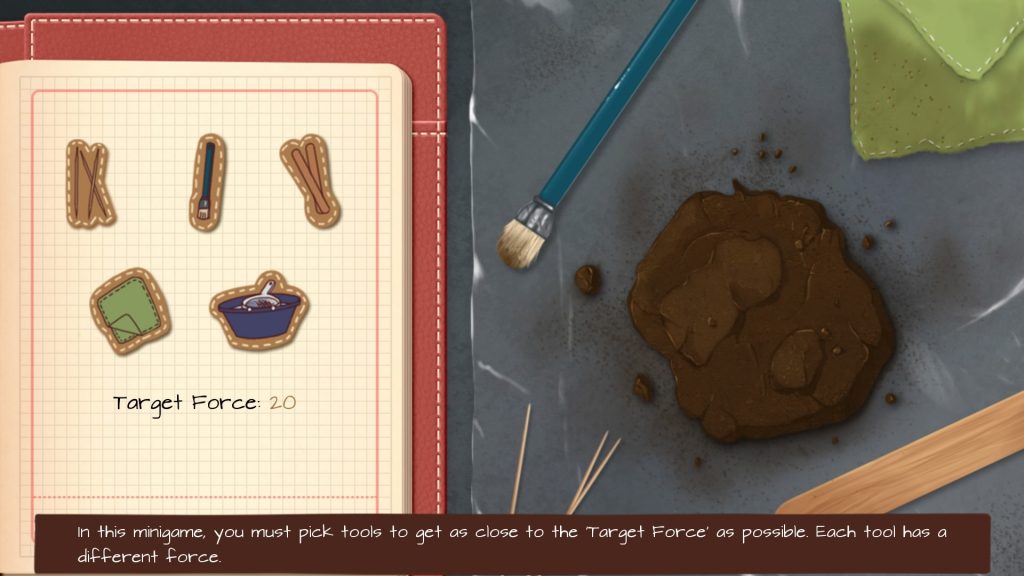 I appreciate a game’s narrative doesn’t have to be all blood and thunder, what C-14 Dating delivers is just a fairly mediocre stroll through 8 weeks of digging in the dirt. Writing takes a cue from wikipedia with their articles filling in some facts about archaeology, geology and the artefacts you tend to uncover. C-14 itself refers to carbon dating, the method used to determine the age of antiquity. Character-building takes a similar route when language barriers between the characters allow for small talk.

Outside the traditional visual novel gameplay, you do get the chance to build stats and schedule your weeks on assignment. These statistics push you towards certain relationships and I do find they’re easy enough to manage. There’s no grind to it and I never found the number crunching too stressful. It’s effectively just a menu choice with only your time in the lab or cave spent doing something more involved.

I find the time-frame gives you enough time to maximise two of the game’s four attributes. You have plenty to spare and they don’t diminish much when you neglect them. When it comes to the actual dating and friendship, the conversations play out straight-forward. I found generally being nice and giving the more likely option opened up the opportunities to become friends. I do like how love isn’t fast-tracked and it does feel like a more organic pursuit than in other visual novels. 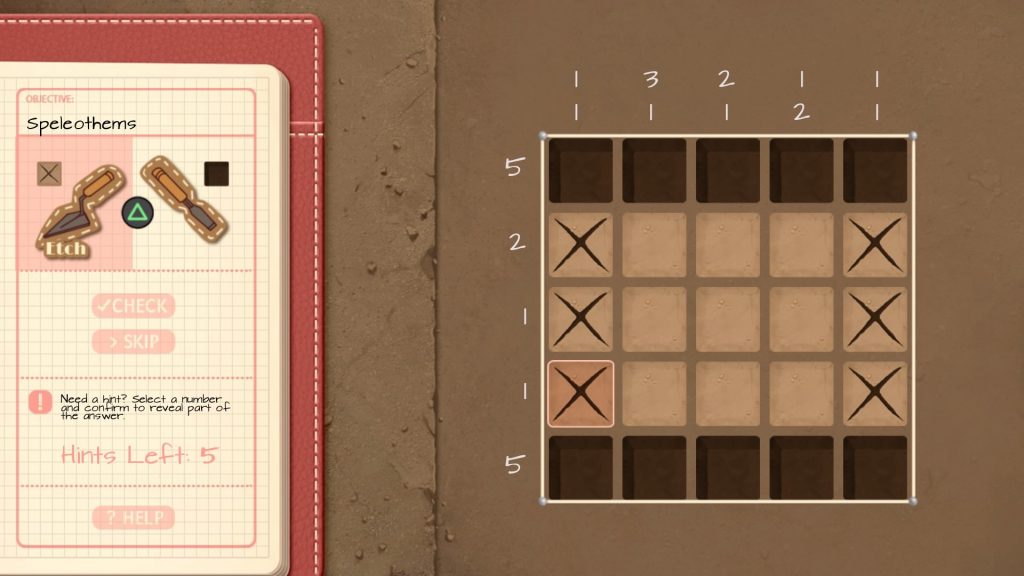 These two puzzle mini-games offer a more taxing intrusion. Your time in the cave offers some Picross. It’s a nice diversion that allows players to apply logic to a grid of numbers. You have to excavate the right squares and I do enjoy stretching my grey matter to uncover some fossils and artefacts. There’s a hint system available and you can always skip puzzles until the next time. You can turn these off entirely if you’d prefer to stick to the dating.

The lab puzzles are a lot more primitive. It’s a simple game of arithmetic where you have to pick tools to brush delicate rocks. There’s a target strength you need to meet and exceeding this will cause the rocks to crumble. Each tool has a number associated with it and you only see the first one you pick. From that you determine the values of the others and try not to go bust. Compared to the Picross, it’s much simpler and not as engaging. On top of that, either of these diversions really offer much in the way of rewards. You can add drawings to your journal but, in terms of character stats, there’s no benefit for doing these. 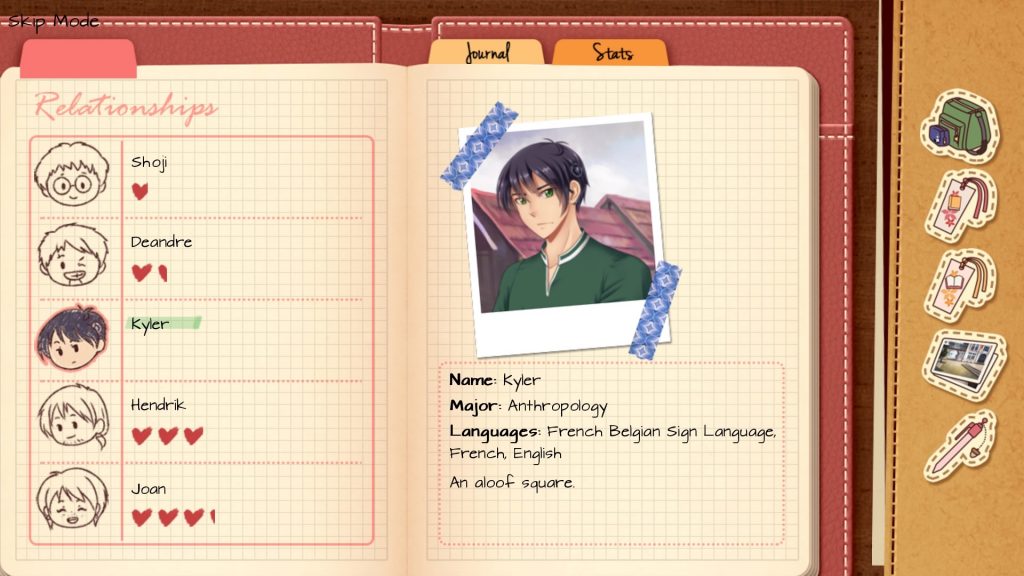 Visually, there’s nothing much to complain about. The portraits are lively and backgrounds are bright. It does feel fairly static but does portray plenty of personality. Musically, it’s also cheery. I did find it overbearing during the puzzle segments but the score does a decent job of maintaining an upbeat tone.

Despite this, I didn’t really enjoy C-14 Dating that much. The characters and setting didn’t really grab me. I did enjoy how organic some of the relationships felt, although I found the cast were too happy to cooperate. It’s cordial and with very little conflict and led me through a fairly boring summer excursion. The puzzles give you something else to focus on but they feel inconsequential.

C14 Dating
5 Overall
Pros
+ An interesting premise.
+ Bright and cheery visuals.
+ Plenty of relationships to pursue.
+ The Picross puzzles offer something else to focus on.
Cons
- The cast feel very accommodating and bland.
- The setting's not fully utilised.
- The mini-games don't offer many tangible rewards.
- The music can become overbearing.
Summary
Overall, I find C-14 Dating to be a little bland and forgettable. The story does emphasise friendship before romance and the stat building doesn't become a genuine chore. Unfortunately, I didn't find the characters particularly engaging or interesting to talk to. I wasn't especially enthralled by the archaeology-laced writing either. It's presented well but none of it really stuck with me.