From indie developer Moondrop comes puzzle platformer Degrees of Separation. Nothing to do with Kevin Bacon though. Nor is it based on a dismal tug of love custody battle TV movie with Stockard Channing. Instead the separation is between Ember (summer/fire girl) and Rime (winter/ice boy), each of which affect the climate and ambient temperature in their half of the screen.

Graphically there’s a clean style as you can see from the screenshots here, your view being on an uncluttered 2D plane without too much else going on to obscure your vision. Occasionally there’ll be a structure in the foreground occluding your view, but thankfully it doesn’t happen too often. 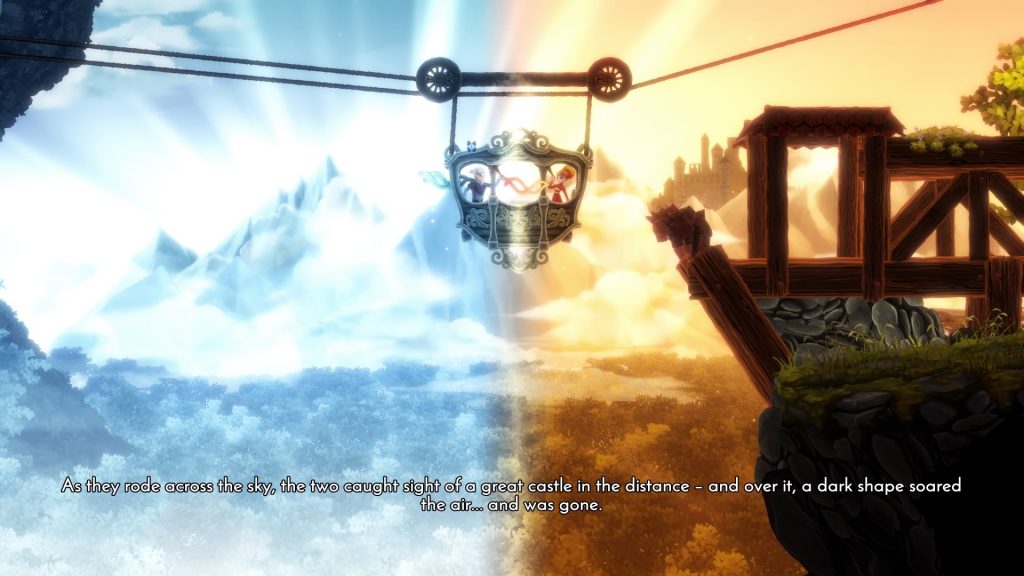 Your screen is divided into two dynamic planes with each character on either side. Initially you’ll be reminded of Brothers: Two Sons, but when you realise you can only control one character at a time that comparison is diminished somewhat. Unless you call your opposite number to follow you, they’ll stand still, the screen eventually splitting like the old Micro Machines games. You might be lucky enough to have a willing co-op partner to assist, plugging in a second controller allows you to play together. In our case, our co-op buddy was in bed.

will allow you to switch characters, and

will call your companion to you. This latter point is complicated somewhat if you have a complex series of platforms and ladders to negotiate, the AI pathfinding being a little on the rudimentary side. You’ll generally have to intervene at some point as your hot/cold avatar will inevitably end up stuck on the scenery or a puzzle will need your input. 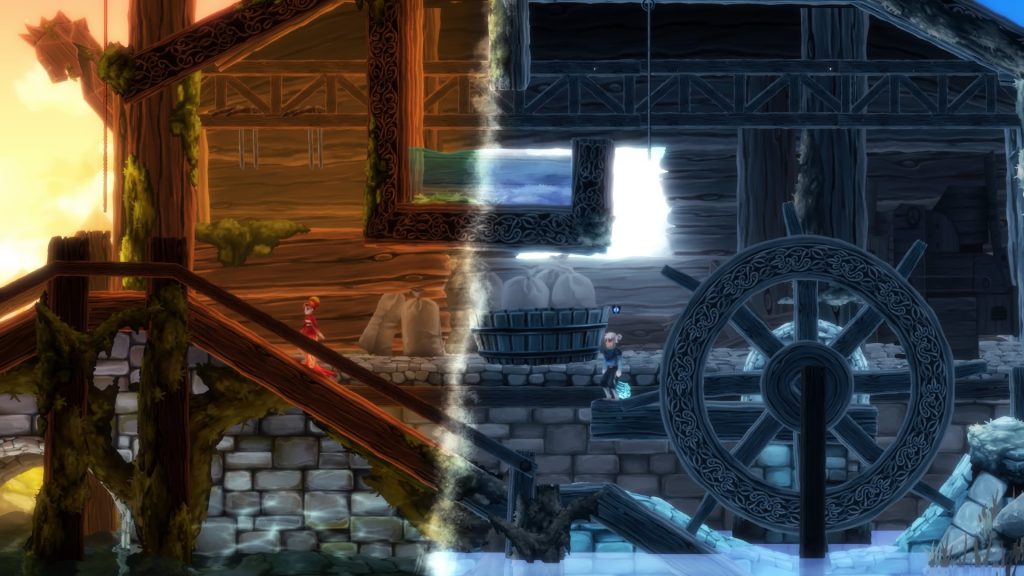 Early on at least, the puzzles are a little rudimentary but they soon up the complexity somewhat. Ember’s ambient temperature will affect warm and hot items such as lanterns, these will rise like a hot air balloon. One puzzle has you juggling her and Rime’s abilities to get high enough to retrieve a collectible. There are also hot air vents that impede your progress but they can be stopped by Rime, leaving you to get Ember through without reactivating them.

In addition, Rime will freeze a body of water solid and Ember will thaw it. One puzzle involves a water wheel that will only move when Ember is close enough to keep the water flowing, Rime’s very presence is enough to freeze the water, by doing so you’ll be able to go the opposite direction to the rotation of the wheel. 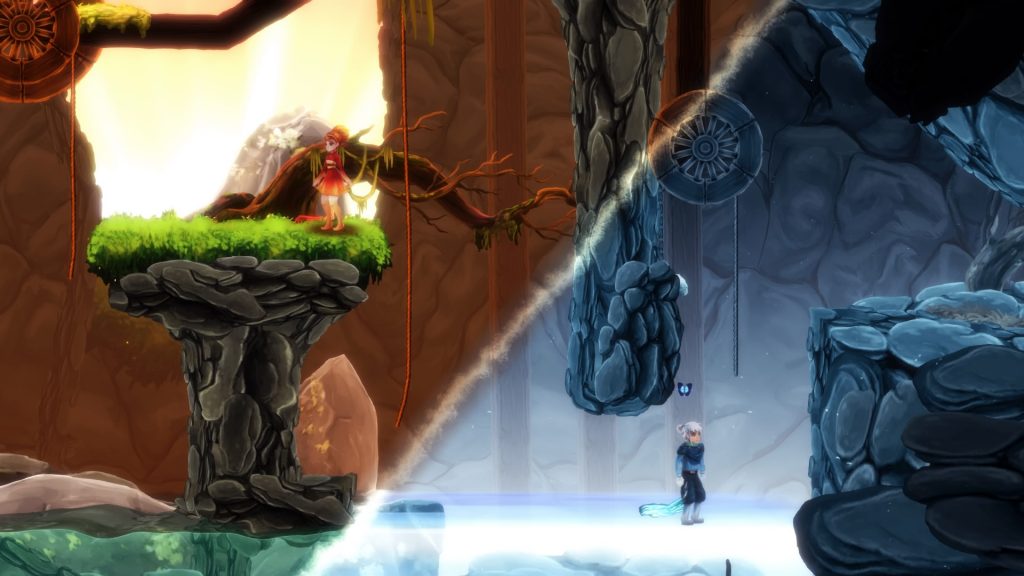 If you have one eye on Degrees of Separation‘s trophies, you’ll no doubt notice they are very much focussed on collecting all items in the different areas. Though the only collectibles here are scarves, generally reachable with a bit of co-operation between Rime and Ember. One particular scarf sat on top of a well, try as we might by conventional means we couldn’t reach it. It was only a little later we had something of a eureka moment when we realised we were doing it all wrong.

You’ll often have these sorts of epiphanies with Degrees of Separation, a puzzle seeming to be unsolvable until you realise you need another item such as the barrel. The barrel gathers snow when pushed by Rime and becomes a snowball, but immediately melts when touched by Ember. The aforementioned scarf atop the well could only be reached by rolling a snowball towards it, though not without some tricky puzzle navigation before. 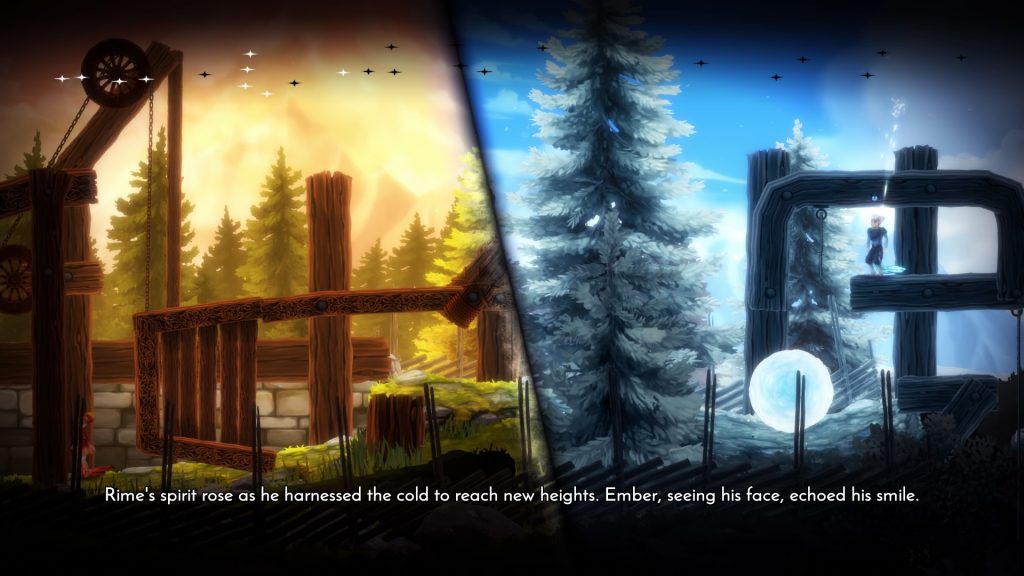 There’s a well written story penned by Chris Avellone, the writer of Fallout: New Vegas. He’s obviously enjoyed writing something other than a scenario set in a post-apocalyptic nuclear wasteland and it shows. The female narrator also helps set the scene very well, it’s not unlike the feeling we had playing Bastion, just not quite as reactive as the dulcet tones in Supergiant’s console debut. The story beats unfold, with helpful subtitles on by default, as you progress across the landscape to your goal. 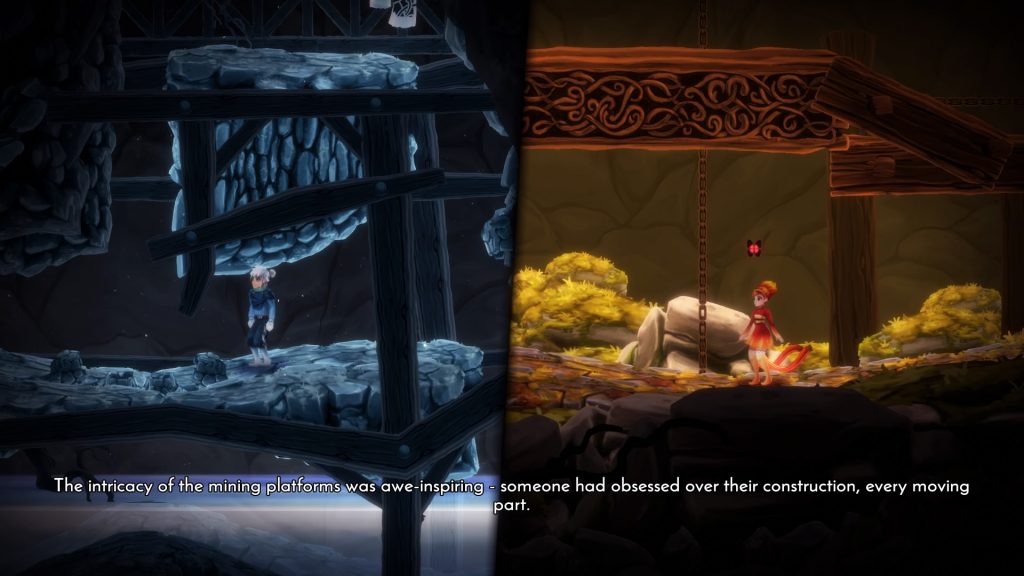 This is a fairly entertaining puzzle platformer that you’ll generally have fun with but there’s something missing as we didn’t feel all that compelled to keep going back to play it. Perhaps it’s us, we don’t know. Maybe our own inability to move on without hoovering up the collectibles was an issue but we did encounter a distinct lack of impetus to romp through the story. Maybe it was the boy meets girl in a mythical land that left us a bit jaded.

Either way, Degrees of Separation  is a well done puzzle platformer that might well grip you. But it might well leave you feeling unenthused just as we found it did.

Degrees of Separation
7 Overall
Pros
+ Well written story
+ Environmental puzzles are well done
+ Interesting hot/cold mechanic
+ Couch based co-op is a welcome addition
Cons
- Possible you'll get ennui just as we did during our playthrough
- You might get as hung up on collectibles as we did
- AI pathfinding is rudimentary at best
- £15.99 is perhaps a little too much for players to take a punt on on a crowded PSN store

Summary
A well produced puzzle platformer that we want to like but somehow came away from without being too thrilled. Not a bad game, just not distinctive enough to distinguish itself from its peers.