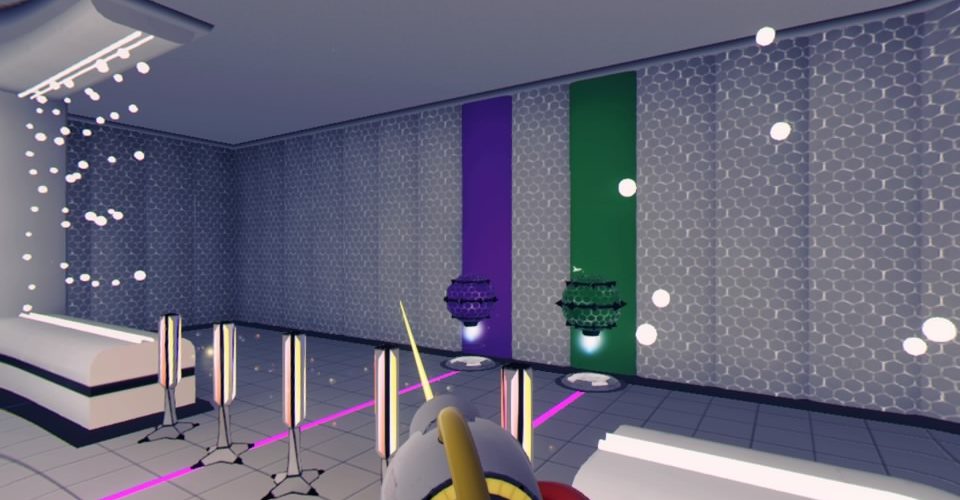 ChromaGun VR is, as the name suggests, a PSVR update of Pixel Maniacs’ original ChromaGun game, a colour-based puzzler that has been around on iOS and computers for a few years but made its way to the PS4 in 2017.

The game is a straight port of the original with no new content, levels or puzzles. The only new feature is that the game is played with the PSVR headset and supports the Aim controller (although a DualShock 4 will work just fine too) which has us scratching our heads as to why this isn’t just a patch for the original rather than being a separate purchase (note: there was an offer to get the game free, if you owned the original, but at the time of writing this has expired).

I never dabbled with the original release and so am coming to this one completely fresh. From the outset though it is clear what this game’s primary influence is. The clean laboratory setting, the experimental tech, the style of the puzzles and the staid but funny comments that come from the person overseeing your trials all quite obviously are nods to the Portal games. 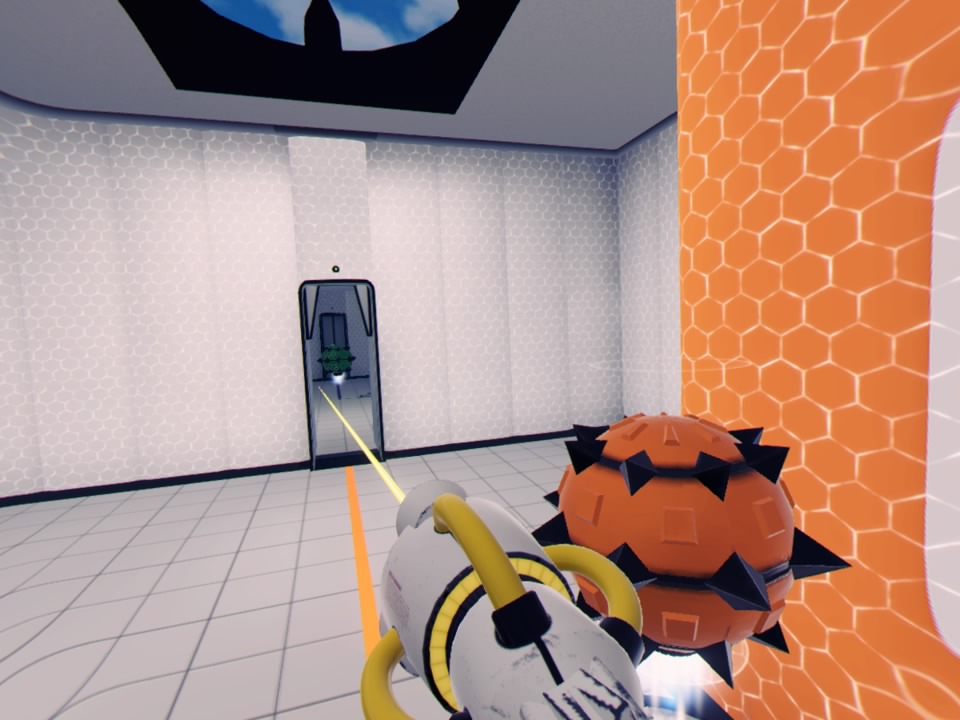 The similarities are obvious but ChromaGun VR does have its own gameplay mechanic. Rather than using portals and gravity, this game is all about colours. The basic premise is that you have to get to the exit of each level and in the way are various obstacles. Most of these are doors that have a pad that opens them. You can either stand on these or lure an AI droid to it so that the door stays open while you walk to the door.

To lure droids you can either paint a wall near them the same colour as they are or you can paint them to match the wall. Either way there will be an attraction effect and the droid will head in that direction unless you change one of the colours or create an attraction elsewhere. To ‘paint’ something you simply set your gun to one of three colours and then point and shoot using the Aim controller or the top of the DualShock. 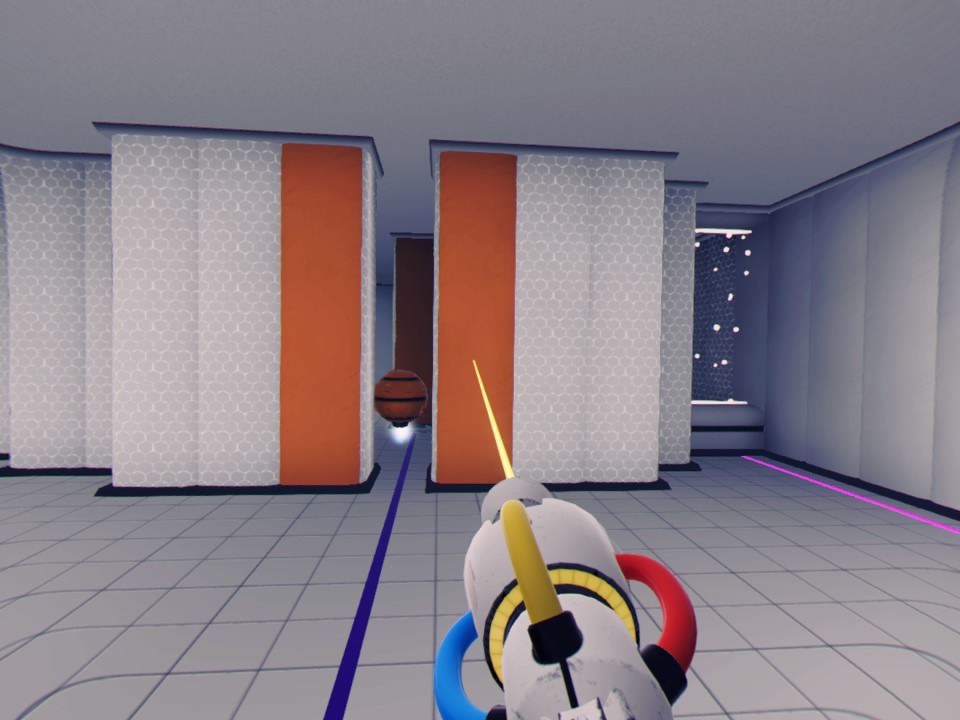 Other droids are more aggressive and will follow you when shot/painted. They’re only slow but if they corner you, you might be in trouble and will end up dying and having to restart the level. However, you can use their aggression to lead them towards matching walls in order to open other doors.

The colour mechanic is smartly used. You fire primary colours only – red, blue and green – but can mix these into secondary colours by combining.  If you try to add a third colour, the object will go black which has no attraction properties.

As you progress through the levels, different challenges are presented such as coloured walls that you can’t change, exploding floor tiles and various barrier types that add additional complexity. Of course this means that the later levels are more complicated than the early ones which are refreshingly brief. Much like many other puzzle games, this means that for some players the game might be less fun as you go on but if you like puzzles and using that brain of yours then you may find that the game gets stronger as it goes on. 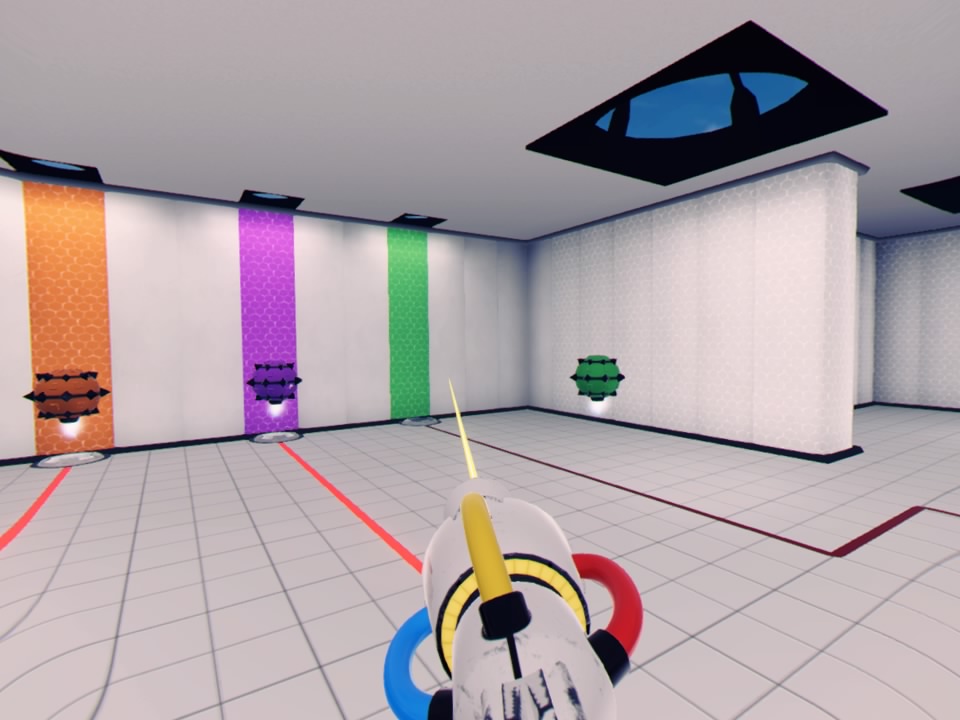 The puzzles can be pretty satisfying and the game’s first person view and simple controls mean that you are never struggling with the interface when trying to figure things out. We’d love for there to be a sprint button though as there doesn’t appear to be a reason not to have one and it would definitely improve the user experience but there’s no issues aside from that.

Beyond the main ‘move this to move that to pass this to open that to go there and do that’ gameplay, there’s not a whole lot else to report from ChromaGun VR. The controls are pretty straightforward but while this is one of the few games to support the Aim controller, after a while I found it more comfortable to play with the DualShock. There’s no requirement for fast shooting so using the Aim is more of a stylistic choice to make it feel like you are holding the titular ChromaGun in the same way as you are in the game.

That said, we had no issues with tracking or aiming with either controller choice and the game offers you a few options in terms of your movement and comfort settings so the game shouldn’t be barf-central either but after a few hours of brainbusting puzzles and VR action, we did develop a headache which isn’t our usual experience with PSVR. 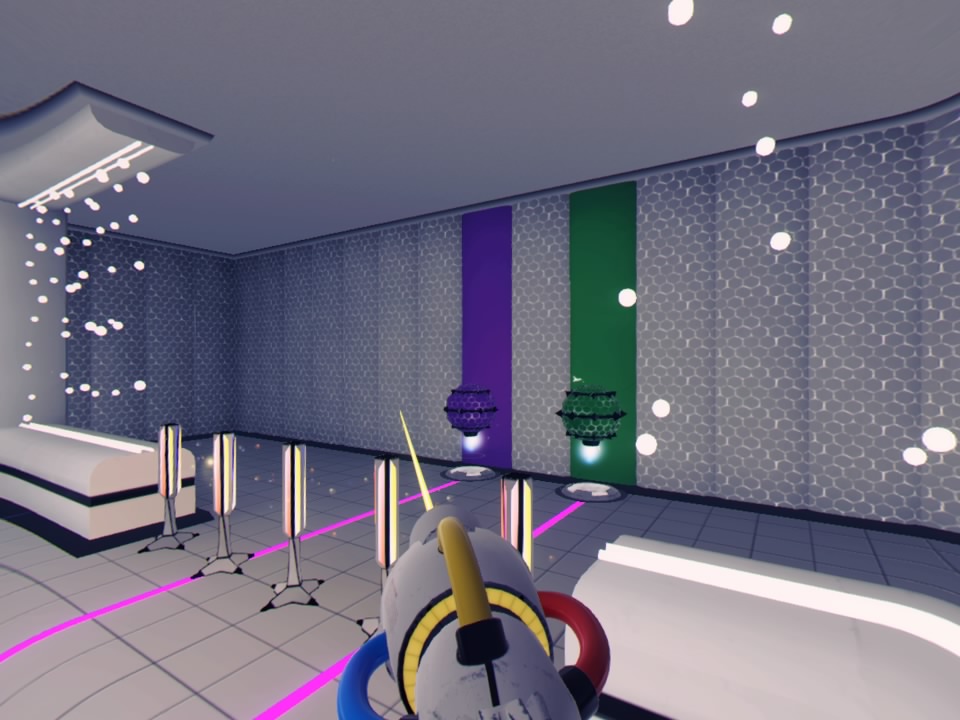 The take away from this review is that everything is pretty capable. The puzzles are well-designed, albeit a little repetitive, and the controls are functional enough. Visually the game is surprisingly bland though with a cold stark look and just those primary and secondary colours to brighten it up. The droid designs are very simplistic too so there’s not really much to it and the VR effect doesn’t particularly pop either.

In the end you are left with a decent but unremarkable puzzle game that offers a fair amount of content but the presentation does lack a little in terms of excitement and visual flair. The VR makeover doesn’t really feel essential but is a game that can be enjoyed, preferably in smaller sessions.

ChromaGun VR
7 Overall
Pros
+ Smartly designed puzzles
+ Simple but effective controls
+ Supports the Aim controller
Cons
- Is a separate purchase from the original
- Visually a tad plain
- Gets repetitive
Summary
ChromaGun VR is a competent and solid puzzle game but some may find it to be a little lacking in variety and excitement and the VR makeover doesn't really justify the additional purchase if you own the original.