As I get older in life, I’m starting to wonder if I’ll ever crack a really tough platformer. That doesn’t stop me trying but I often question my reflexes and patience. Along comes Almost There: The Platformer, a game by Bony Yousuf with an aesthetic reminiscent of the earlier years of independent development. Delivering a challenge with precise controls, can this tricky effort overcome? 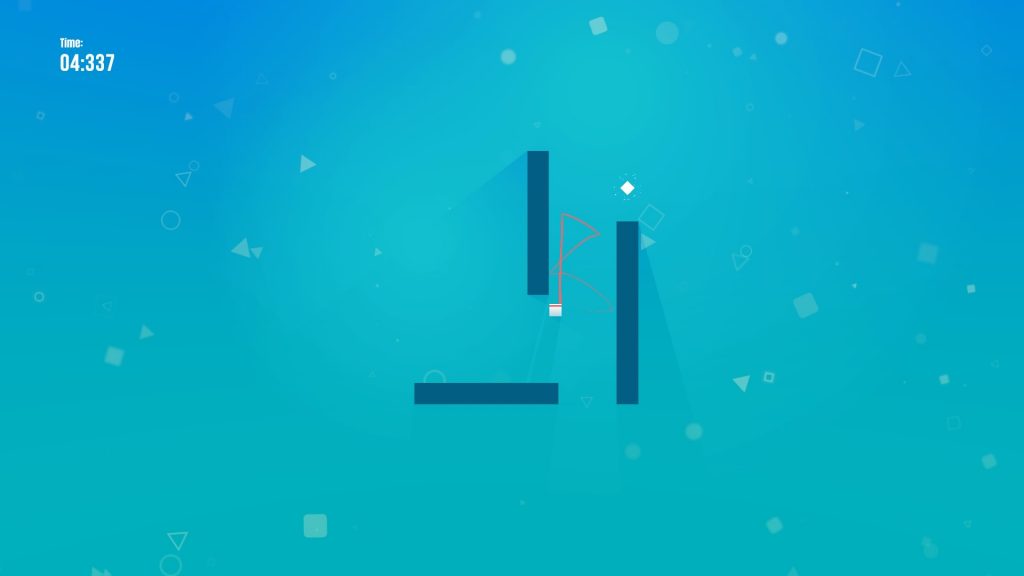 It’s a genre well-trodden now but Almost There: The Platformer‘s rendition of a challenging 2D platformer manages to control pretty well. You move with the left stick and have a jump at your disposal. Running a distance can grant you with a long jump which can help bridge larger gaps. You can tell some levels are designed with this in mind as you see more of these telltale run-ups. Things get more complicated with wall jumps and I find prolonged climbing sections can feel cumbersome. When obstacles are introduced, if I find dodging danger and maintaining momentum can be tricky to accomplish.

Air control feels generous which allows you to dance around spikes, avoid missiles and can bail you out of some tricky situations. When stringing jumps together, it becomes vital and I’m happy this feels consistent and reliable. It’s rare that the controls will fail you. Sometimes my jumps go amiss but I feel that’s more an error on my part, rather than the game. Defeat lands squarely with you, your timing and execution. 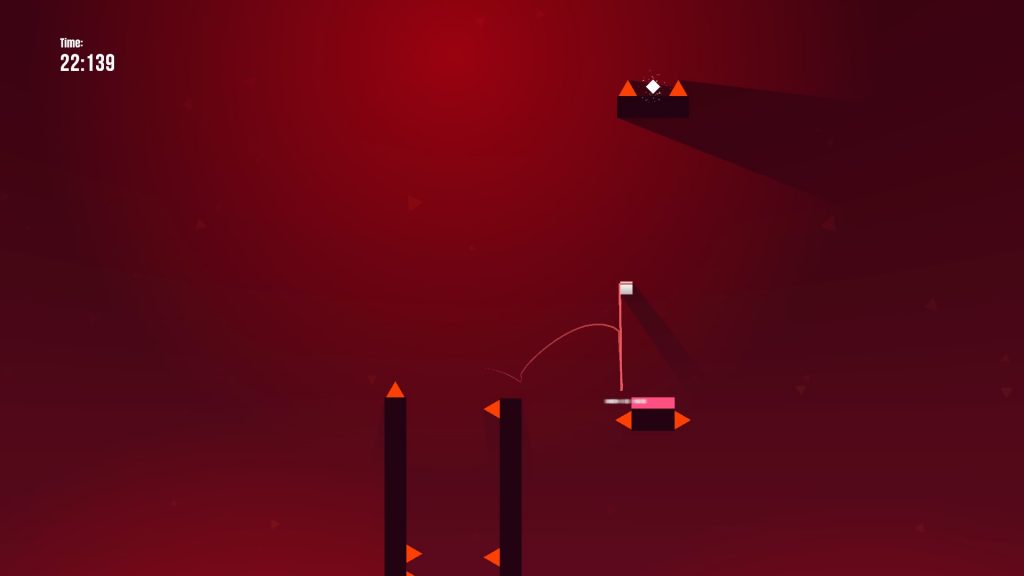 Obstacles come in varied guises. Spikes offer instant death whilst turrets can spew out buzzsaws, lasers, missiles and gunfire. Their trajectory is telegraphed clearly and each obstacle’s behaviour is usually obvious at first glance. Lasers and swinging saw blades test your timing whilst projectiles test your ability to lead and mislead pursuing bullets. It increases in difficulty and the new concepts are usually given time to shine in isolation before being combined in sterner tests.

Levels are designed with a clarity which makes it easy to discern where success should lie. They rarely look to break the 30 second mark but, whilst being scored by the clock, you can take as much time as you need to beat each stage. Beating them can unlock the next until you reach the second tier of each world. From there, just playing a level will unlock the next in the series. It’s a relaxed approach to progression which is initially nice to see.

There’s in excess of 150 levels which you can certainly sink plenty of hours into. Each world does seem to favour a particular element. For example, the first world leans into timed lazer grids whilst the final world contains numerous swinging blades. Given the dozens of levels available to you, it can start to feel stale. There comes a point where Almost There might be more palatable in shorter sessions. A quick restart is at hand to launch you back into repeat attempts. There’s a nice flow to the game’s early goings but, as the challenge ramps up, that begins to dissipate. 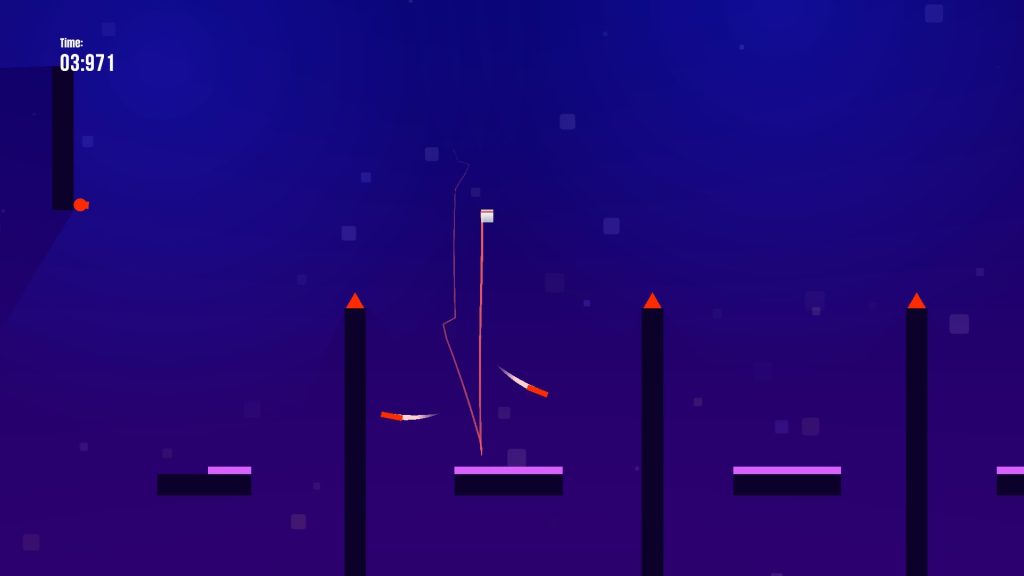 The incentive to beat the latter levels tends to come from within. Trophy unlocks are tied to stars which you unlock based around time but you will not unlock new abilities or any cosmetic extras along the way. At some point, the push of new levels does start to wane. With each level consisting of mostly the same parts, they do blend together and don’t offer as much variety as they could. They’re still constructing in interesting ways but, aesthetically, it starts to become less intriguing. Each world has an accompanying colour palette which does at least try to give each area a personality. On top of that, the shorter trials show the goal very much within reach.

Almost There: The Platformer‘s bare-bones presentation does provide a nice clarity to proceedings. Your playable block doesn’t have a lot of detail but the streak of their bandana flowing behind can help keep track of your trajectory. Everything moves smoothly and there’s no clutter to the simple environments. You see the obstacles coming up and nothing is out to obscure or deceive your eyes. I like the way shadows are cast and gives some depth to a game that could’ve stayed flat and two-dimensional. 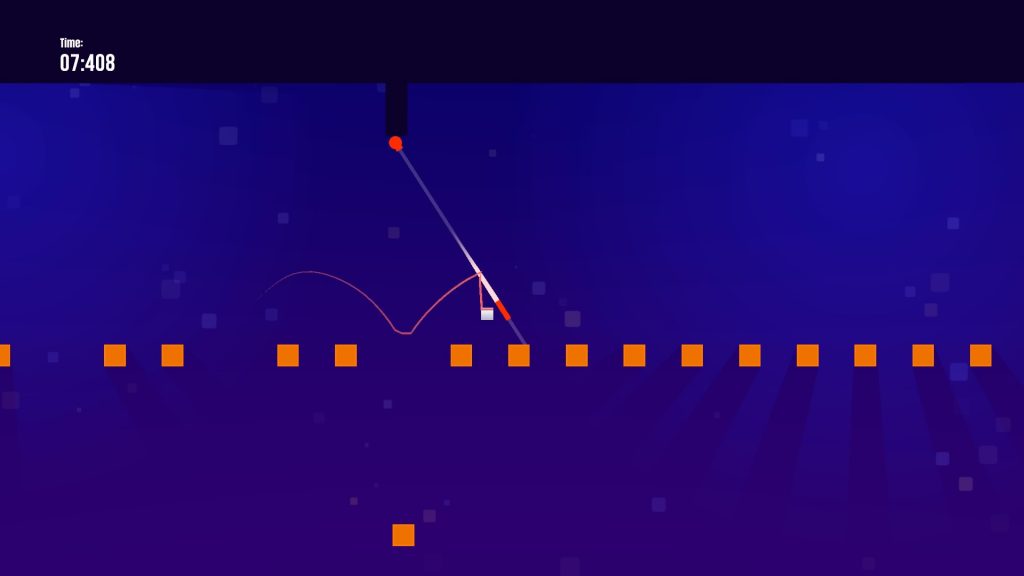 Musically, each world is accompanied by it’s own musical score. The actual tracklist is slim but it’s not intrusive or annoying during a long session. Other than that, you have the noise of gunshots to get accustomed to. Like the visual aesthetic, it’s uncluttered. The presentation on the whole reminds me of a not-too-distant era. Being a product from a single person, there’s a charm and nostalgia for a decade ago when independent developers were starting to be given more attention beyond small circles.

There’s an earnest approach to Almost There: The Platformer which I can admire. Whilst there’s not a lot around the edges, the focus on the simple, short level design allows for very few complications. There’s an enjoyable flow which unfortunately seems to wind down as the challenge escalates, but there’s still a good core to this that I can enjoy.

Almost There: The Platformer
7 Overall
Pros
+ Tightly and reliably controlled.
+ Simple and uncluttered presentation.
+ Short, sharp level design.
+ Plenty of levels to enjoy.
Cons
- Might be too simple for some wanting more substance.
- A lack of incentive to beat the latter stages.
- The game's flow begins to falter as the challenge rapidly ramps up.
Summary
Almost There: The Platformer's simplicity becomes one of its greatest strengths. The controls allow for precision and the level design keeps things easy to grasp but hard to master. The challenge manages to seem within reach whilst offering you dozens of levels to tackle. Unfortunately, the momentum of early progress is hampered by a steep challenge but there's an execution and focus here which leads to something enjoyable.