Most commonly known for their Hyperdimension Neptunia games, Idea Factory and Compile Heart have released Dark Rose Valkyrie which is still a JRPG but is a slight deviation from the norm. With the aid of some Tales of key staff they’ve tried to create a more mature game although there are still some elements that people will recognise.

You play as Asahi who has recently been made captain of the Valkyrie Force despite having little experience. The task force was created by ACID to defeat Chimera which are humans infected with a virus that was brought to Earth on an asteroid and has turned people into monsters. All this takes place in an alternate history Japan in 1929. 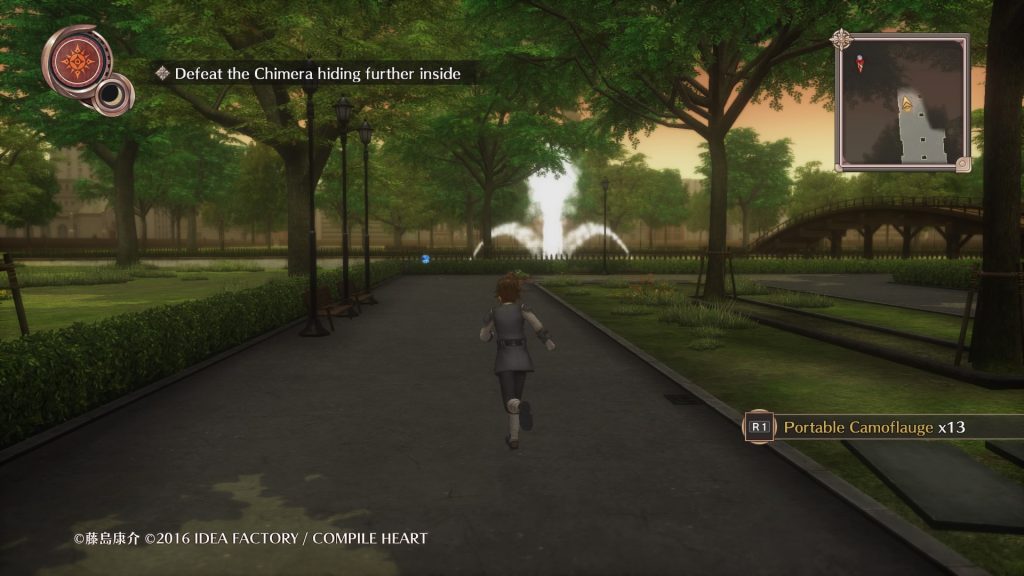 The story is actually decent, helped by the characters that make up your squad. Due to the Chimera virus having a greater effect on males your team is primarily made up of girls with only a couple of guys. Yes, they are generally quite cliched with the quiet, shy one, the one who dresses like a boy, the posh one who doesn’t understand how the world works, the girl next door, etc. but there is some actual depth there that makes them worth getting to know.

The gameplay portion of the game actually has a couple of parts to it. There is the part where you leave you base and explore the world map and enter dungeons and the part back at base where you talk to and get to know your teammates. 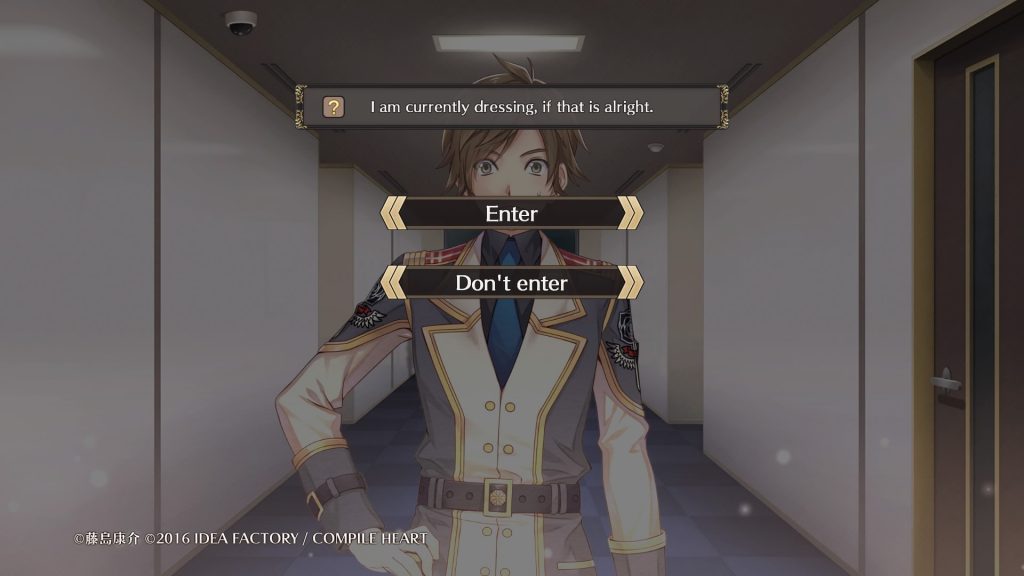 The story missions take you out of the base, usually to a specific location and battling a boss with bits of story throughout, followed by some general busy work missions which involve killing monsters, collecting items, discovering new locations, the usual. You move in third person and encounter enemies that patrol, there are no random battles although the enemies move quick enough that avoiding them is pretty much impossible. You can attack the enemy in the hope of getting an advantage upon starting the fight but it is one of the worst systems I’ve seen for this type of thing and regularly just results in you being on the back foot.

Once in battle it’s a turn based affair but with more systems than you can shake a stick at. There is a time bar on the left of the screen which shows characters moving and when each can act, you can delay enemies by attacking them and once you can act different actions take different amounts of time to initiate. On top of normal attacks are your magic attacks which are called Arts and use AP, Ignition and Overdrive which are different levels of powering up and you can switch out party members for ones in reserve. On top of this enemies have a Guard gauge which when broken can lead to extra attacks from both the attacker and those in reserve. It’s a lot to take in and although you don’t get it all dumped on you at once the opening is quite heavy on the text based tutorials.

Unfortunately complexity doesn’t necessarily mean it’s any good. Even the most basic battles can take a long time as your characters play out their combos which take far too long. You can skip certain special moves and speed up the wait whilst no one is acting but once someone starts using a basic attack you have to sit there in real time and wait for it to finish, even once the enemy is dead. Initially seeing all your characters go to town on the enemy is fun to watch but that doesn’t last. Also it takes a long time to get any decent attacks and even then they can be very expensive to use (AP-wise) which means taking out groups of enemies is always a chore. It makes the meat of the game less enjoyable than it should be. 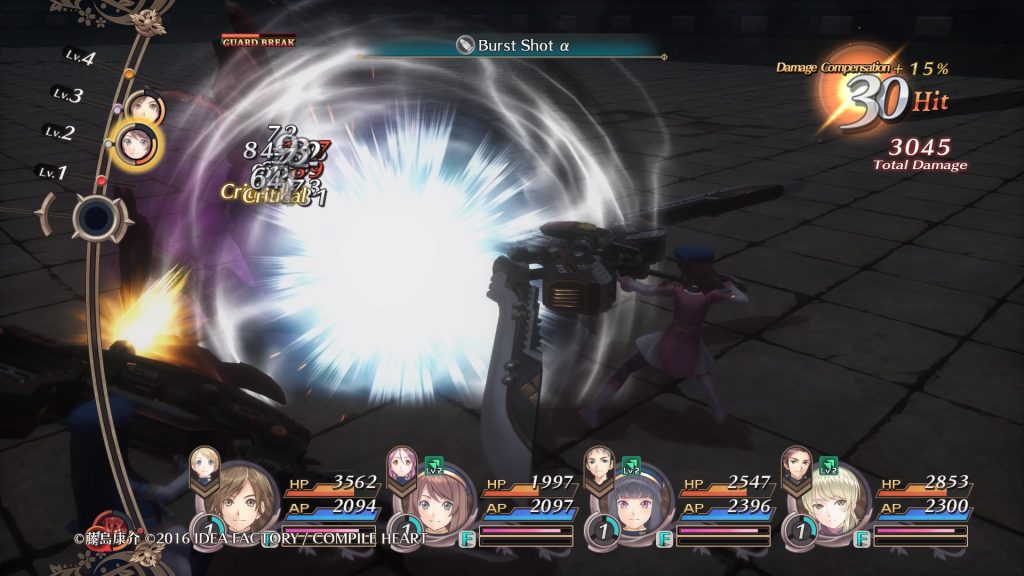 Outside of that you have the dialogues with your teammates. If a scene is available to view then their portrait will appear with a green exclamation mark next to it (red indicates story progression). During these scenes you will get a dialogue choice which will advance your friendship and trust levels. It can be difficult to tell which is the best response from their replies and there is no friendship bar that fills up or anything which I guess is better than being super obvious to the point of being pointless but a little more feedback would have been helpful.

That is the basic loop of the game. Go do a story mission, go back to base, talk to people, do side missions, go back to base and maybe talk to people again, main mission and so on. There is a lot of character maintenance but it is very complicated with the combos you use in battle being fully customisable. This means checking whether a new move you unlock is any good when you level up for every character, and levelling up itself is super intricate as you can put points into any stat you like, again for every character, but each stat costs a different amount to level. New skills and abilities unlock upon hitting certain stat thresholds but the game doesn’t tell you what these are until you’ve already hit them which is just silly. Weapons can be upgraded with scrap but everything costs a lot of money that means you go for long periods of time without changing your equipment. 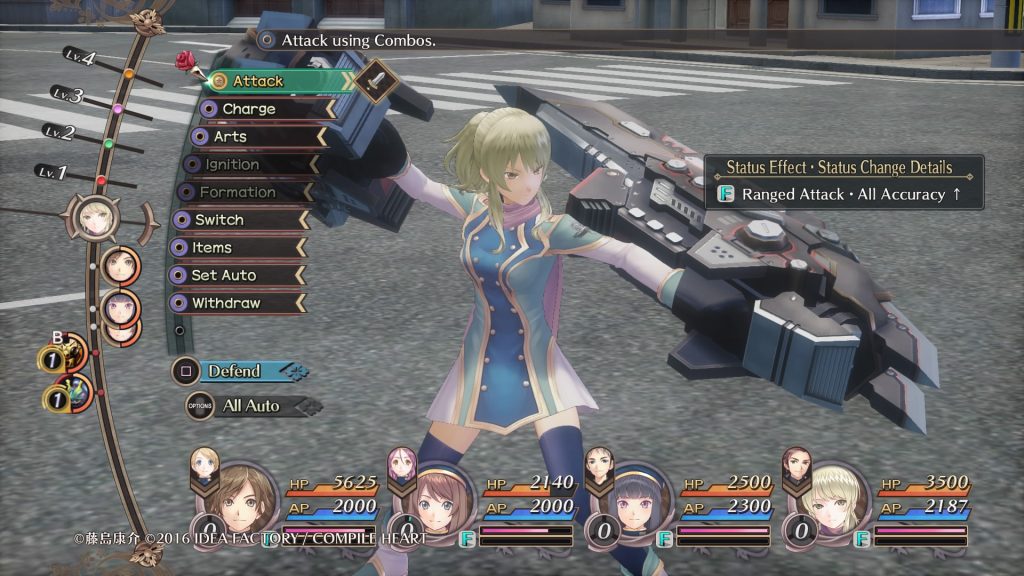 Visually the game is a mixed bag, with great 2D character portraits that are partially animated but weak environment graphics. In battle the character models are actually quite nice but nothing that is pushing your PS4, which makes the terrible frame rate on the world map completely unacceptable. Sound-wise again the characters are the stars with good voice acting, each character sounding unique. The music is recognisably Compile Heart-esque with some memorable tunes but not their best work.

Dark Rose Valkyrie is a game that succeeds in the area where a lot of JRPGs fail in the characters but falls down on the main element of any JRPG which is the combat and exploration. It’s unfortunate as there are some great ideas in here, some of which I haven’t even mentioned for spoiler reasons, but pretty much every mechanic feels a little undercooked with more balancing or development required.