Napoleon tried it in 1812, just as the massed German forces tried similar a hundred and thirty years later. On both occasions they embarked on the grand folly of a land war in Asia. Extended supply lines being their undoing. We had a similar feeling when playing Greak: Memories of Azur. You see, there’s no checkpointing as such and you’re entirely reliant on manual saves at specific points.

Greak: Memories of Azur is one of those games where the title gives you zero clue as to what to expect upon starting a playthrough. It turns out to be an exquisitely illustrated 2D platformer where switching between your party members is nothing but essential to progress. 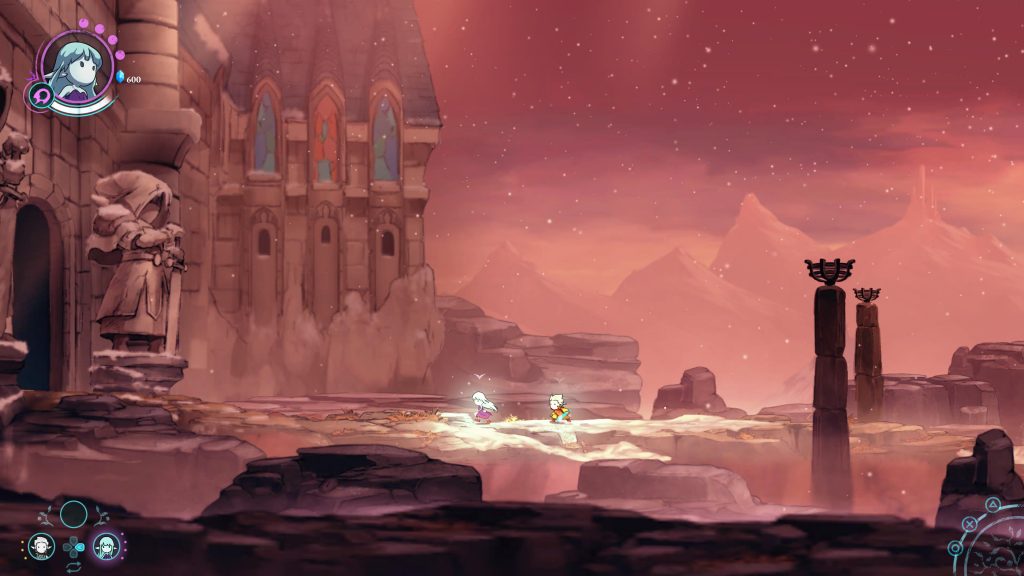 The problem being extended runs coming to an abrupt end as you die and find yourself bounced back to your last save point as if attached by a bungee cord and running on a travelator. It’s especially galling when you have a fussy control system and a series of complicated jumps to nail.

Better still when you encounter unskippable cutscenes such as that when your party is finally fully reunited as three members. Well it would be but for the fact you’ll find yourself dying over and over again and calling bullshit. Then you reload and begin the cycle again. No. Just fuck off. 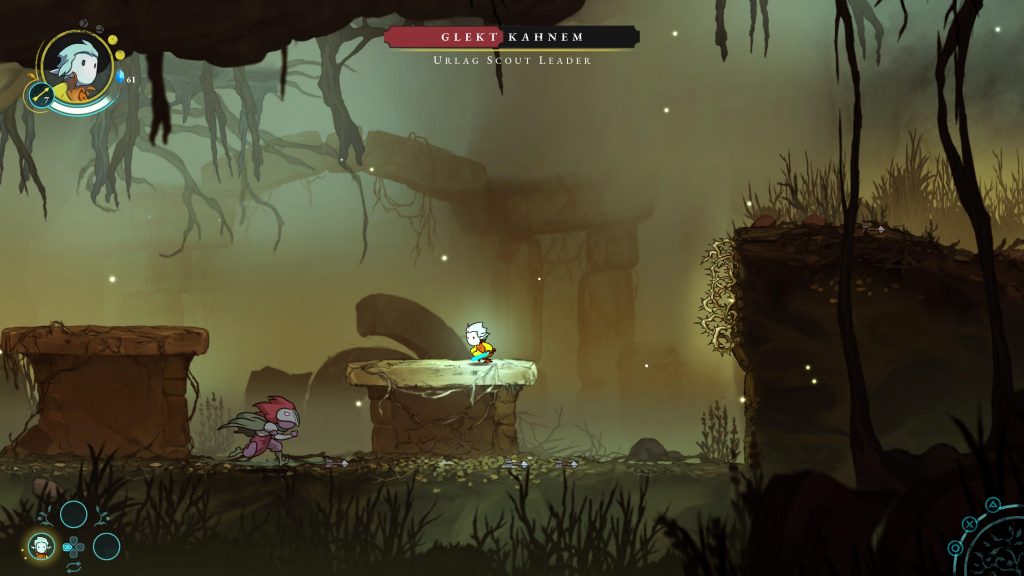 Gameplay is actually fun, were it not for the pernickety inventory limits and having to retread large sections of the game over and again after you die miles away from your previous save. Clever puzzles are punctuating by generally entertaiing platform sections. Dialogue is fairly well written too with your interactions with NPCs being a fair highlight. It makes for a fair diversion from the otherwise generally solitary quest you find yourself on. 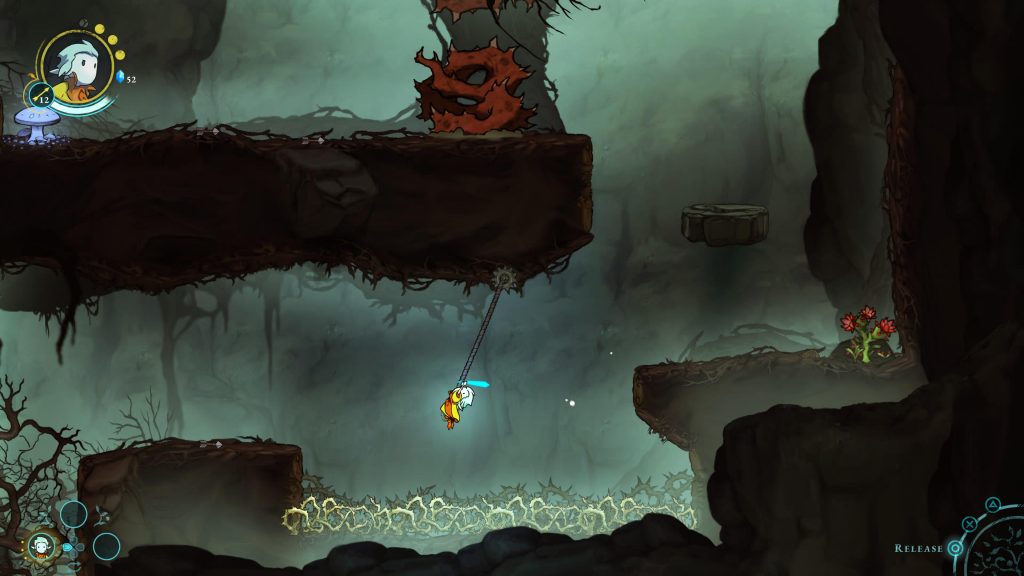 Using the same mechanics as Breath of the Wild, you can cook up items at periodically placed campfires, put three items in to cook and hope for the best. The stingy save system is brought into stark focus by the fact that if you cook up a botched combo and decide to try eating it, you’ll die. We died so that you won’t. Instead, drop it and make like Yogi Bear and hopefully find some health giving nuts and berries instead.

So there’s a story of sorts with Greak and his two siblings (Adara & Raydel) being among the last of the courines, an albino hobbit pygmy sorta thing. For reasons not entirely apparent in the beautifully animated cutscenes, the evil Urlag race seek to wipe out the courines who are the peaceful inhabitants of the land of Azur. 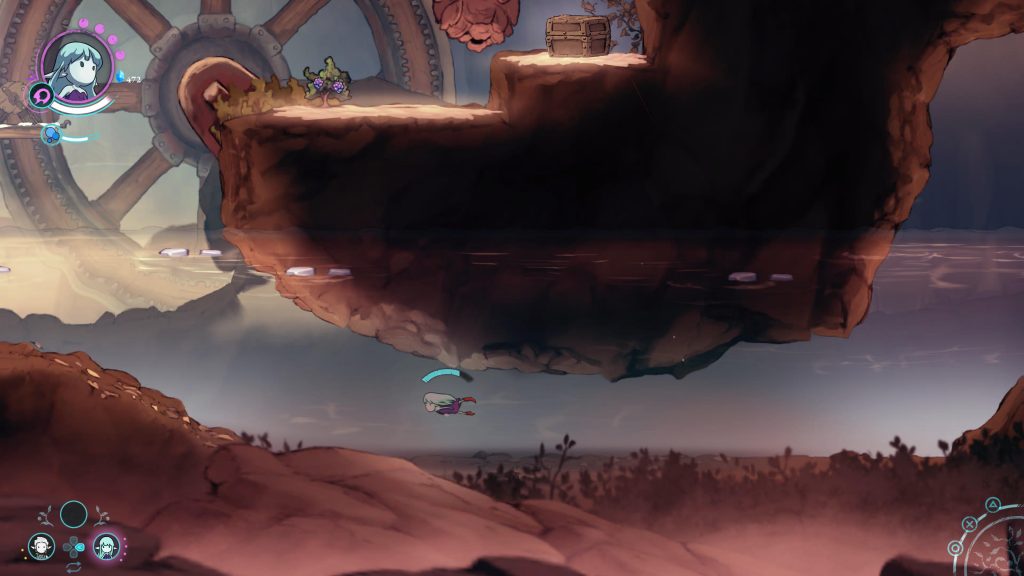 As you continue through the story, you’ll find puzzles that require you to switch  between your party members. For example Adara can swim under water for an extended period, Greak can for a short time and Raydel dies instantaneously. Raydel’s introductory mission includes several jumps across awkward floating water plaforms, as as such can get in the sea along with Priti Patel’s border force jetski pricks. It’s a bit like Interplay’s SNES era collaborative platformer The Lost Vikings, just lacking in terms of implementation.

We had a cursory glance at the trophy list as is our wont. There’s the usual story based trophies as you might expect, but two in particular stood out for us. Firstly finishing the game with a mere five saves. Yes really. What do you take us for? Reviewing games can be a thankless task at the best of times but this is just taking the piss. 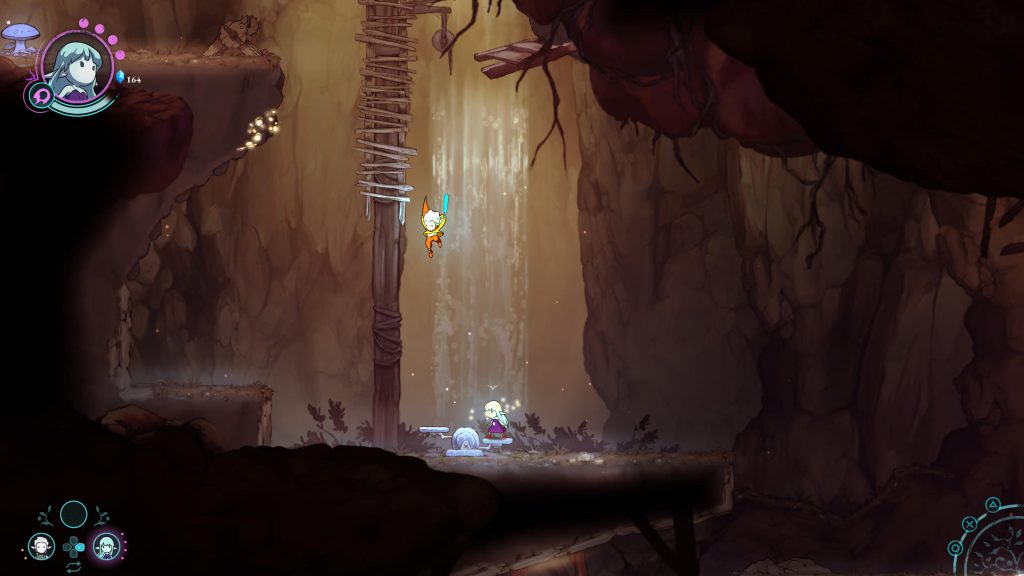 Then there’s the complete the game in a mere three hours trophy. Really? Come on already. We’re at fifteen plus hours on our save, that’s not to mention the countless restarts and unskippable cutscenes we’ve had to labour through. So no thanks on that one.

Weirdly though, despite the obvious flaws, we generally found ourselves having fun with Greak. The platforming is sound and combat is generally solid. It’s just the inventory and saves being far too strung out that ruins the experience for us.

Cons
- Limited inventory space
- Saves are far too strung out given you've zero checkpoints
- Unskippable cutscenes
- Five saves and three hours trophies can get in the sea
Summary
Greak: Memories of Azur is a solid puzzle platformer that is broken by the save system and crappy inventory management. We hope you like replaying sections over and again as you'll be well catered for.