Nearly five years ago Convoy was released on PC, a Kickstarted project that sold itself as a mix of roguelike classic FTL and Mad Max. Now Convoy has done something FTL has yet to achieve, it’s arrived on consoles in the form of Convoy: A Tactical Roguelike. Is it one of the good Kickstarters and how has it handled the jump from mouse and keyboard to gamepad? 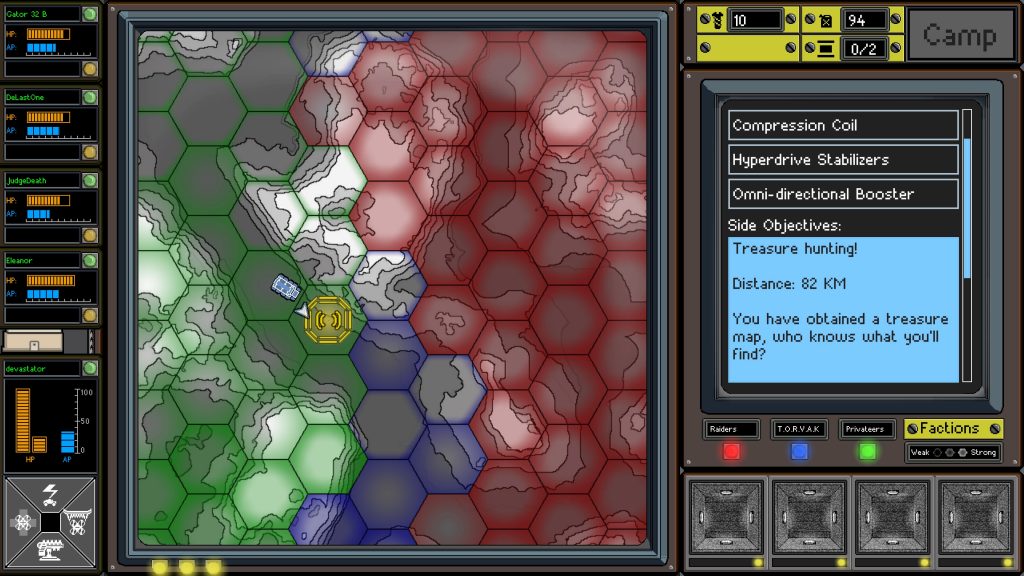 The Spaceship Mercury lands on Omek Prime with many failed systems. You have to set out with your convoy to retrieve key equipment to repair your ship to get off the planet. Unfortunately the planet is populated by three factions vying for control and you’re an enemy to all of them. The Privateers used to represent the Empire but have since become pirates searching for wealth at all costs. The Raiders are infected which has enhanced them but made them erratic and violent. T.O.R.V.A.K is a tech cult who worship AI and are looking to advance themselves.

The main screen shows a topographical map and your convoy. At all times you have a list of items that will tell you the direction and distance to the four main objectives, the Mercury (where you must return the items to) and the nearest camp. You have fuel to worry about so taking roads will be the most efficient means of travel but if you do go off road the steeper the terrain the more fuel you’ll use. As you explore you’ll see yellow icons littering the map. These are radio signals which you can drive up to and initiate a scenario.

Each scenario is random. Most involve combat but not all of them and you’ll often be given choices on how to proceed which can either work in your favour or cost you resources or even kill you instantly! I’ve yet to see that thankfully, through luck or judgment. As with other roguelikes juggling the possible gain with the potential loss is the key to making it far and hopefully beating the game. You’ll also be randomly attacked as you drive around so getting to the nearest camp whilst trying to earn as much currency (bolts) as possible to upgrade and repair your vehicles can be a fine line to walk. 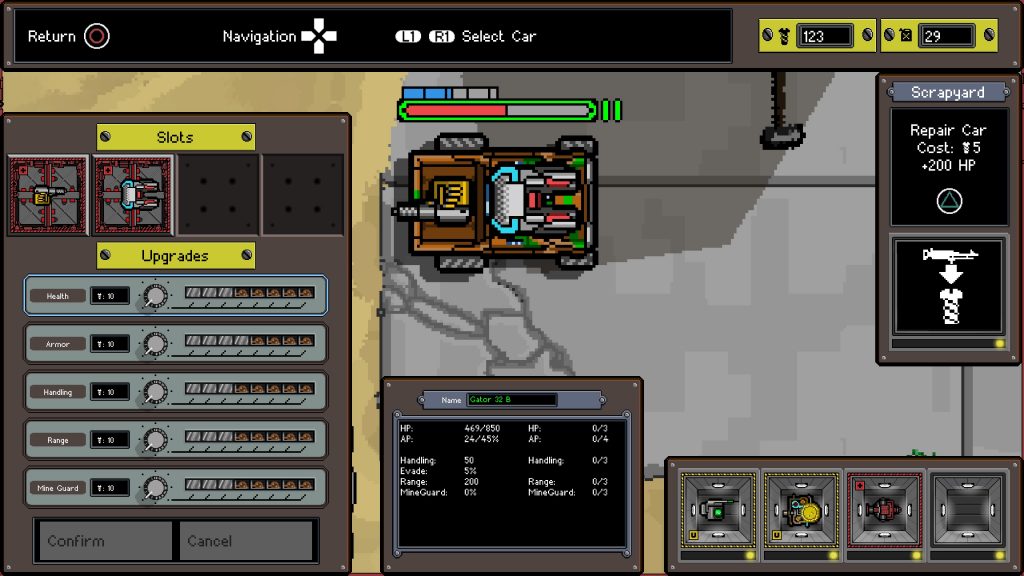 Camps will allow you to buy new vehicles, utilities, weapons and fuel if you need it. You can repair your vehicles and upgrade them, giving them more HP, Armour, greater mobility, better weapon range or making them immune to mines. Each upgrade costs more than the last and bolts aren’t that easy to come by especially when you have other needs. If you’ve been lucky enough to acquire new weapons out in the world then it’s only at camps that you can equip them as well.

So far so tactical, but when you do enter a fight things take a more hands on approach. You’ll be greeted by a single screen with your MCV (the main vehicle which can’t be moved and is less about combat but must be protected or it’s game over) generally in the centre. However many smaller vehicles you have are fully moveable as the enemy units surround you. You can pause at any time, and you’ll need to with the controller as the screen is broken up into squares that the cursor must navigate in order to select where to move to or who to attack. You can change which vehicle you’re controlling with the shoulder buttons and it’s not as slow as it might sound but it’s obviously not as immediate as a mouse.

You have a few options depending on your vehicles and how they’re equipped. The obvious is to get in range for your guns or missiles to attack your intended target. As the enemies move around you may need to adjust your position as line of sight is important. You can also ram enemies from the side. Generally this will cause damage to you as well, unless you have a specific utility equipped and melee weapons will increase the damage you do. You can also use it to barge enemies into obstacles. As you’re constantly moving forward during the fight exclamation points (damage) and skulls (instant death) will flash on screen showing where an obstacle is approaching. Keeping an eye on these warnings is so important as my early attempts with getting the hang of the combat had so many instant deaths from crashing into walls. 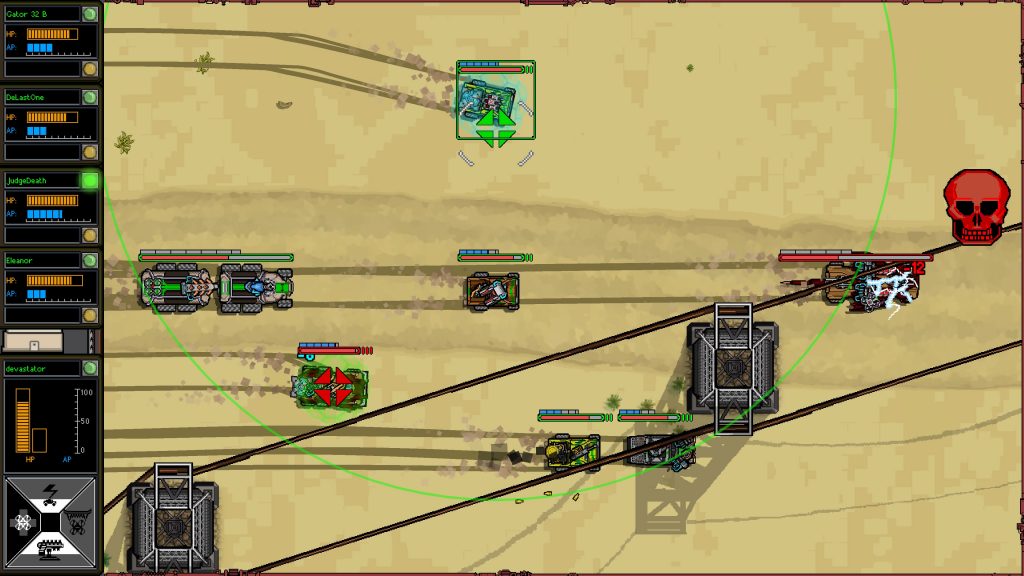 Enemies will get tougher as the game goes on and there are boss fights which include larger vehicles to take down. As with all roguelikes a little bit of luck will be involved as getting an incredibly useful vehicle or weapon early will make things much easier for you but learning the game will help you to survive no end. It only took me a few attempts to complete the game on Easy difficulty but Normal and Hard difficulties up the challenge by giving you less resources as well as upping enemy difficulty. Completing certain tasks will reward you in game by giving you more options for starting vehicles which adds to the replay value.

The pixel graphics are…alright. The map screen isn’t much to look at and the text is just that, but I do quite enjoy seeing the vehicles leave their trails in the sand as lasers and explosions happen all over. It does its job as it’s easy to read when things get hectic. The writing is decent, with plenty of references and a mixture of a dark post apocalyptic world and quirky characters.

The controls haven’t made the jump to controller perfectly, with a few too many button presses required in the shop to mess with your inventory and certain things not even being interactive when they should be. For example I couldn’t afford an item in the shop so I couldn’t even highlight it, but I had no idea what it was so I wanted to highlight it so it would tell me. Similarly you can’t scroll the text in the objectives box on the right hand side of the screen so the top item will often have the distance to target off screen with no way of seeing it, you can only scroll to the next item. A few tweaks and although still no match for a mouse it could be a smoother experience. 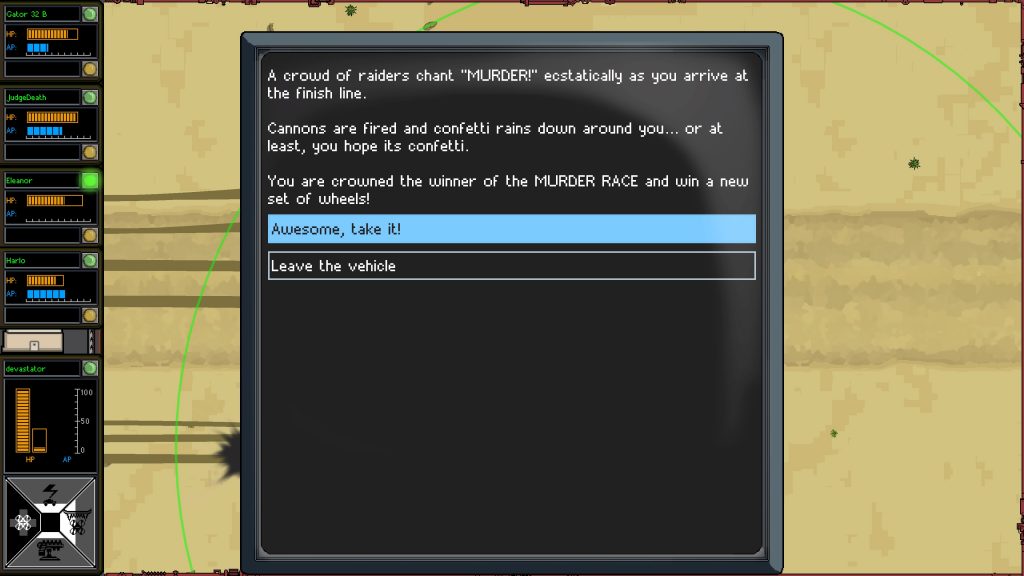 It didn’t stop me from enjoying myself though and I’m currently part way through a decent run on normal difficulty. It does often feel like a good approximation of a ‘road warrior’ game and as with all good roguelikes when things are going well you feel great whilst nervous that one wrong move could end it all. If you want an FTL-like experience on a console then this is probably as close as you’re going to get. Any fan of tactical roguelikes should give Convoy: A Tactical Rougelike a try though. Spraying aerosol into your mouth is not recommended however.

Convoy: A Tactical Roguelike
8 Overall
Pros
+ A great tactical roguelike
+ Decent road warrior-style battles
+ Lots of random encounters to experience
+ Plenty of replayability, even after you beat it
Cons
- Controls aren't quite perfect on controller
- The odd bug
- More pixel graphics
Summary
Convoy: A Tactical Roguelike offers strategic, Mad Max-style car combat with difficult, choice-based gameplay. The gamepad controls aren't perfect but the tactical pause saves any issues this might cause and delivers a replayable challenge.

One thought on “Convoy: A Tactical Roguelike – PS4 Review”