HyperParasite is a roguelike twin-stick shooter/brawler from Spanish dev crew Troglobyte Games and while it is the latest of a long line of twin-stick shooters to hit PSN after a debut on PC, this one is a little different to the rest.

You see, HyperParasite combines an interesting gameplay mechanic with a whole heap of ’80s references in a meaningful way that really shapes the action.  The first, most obvious reference is John Carpenter’s The Thing.  You play as an amorphous blob of sorts.  You move around with the left stick, aim with the right and shoot with

You can only take one shot or melee attack though and initially you have no extra lives.  So your path to success is to take over the bodies of humans.  You do this by getting close enough that they are in your absorb radius and then you press

.  Their body becomes yours as does their main and special attacks. 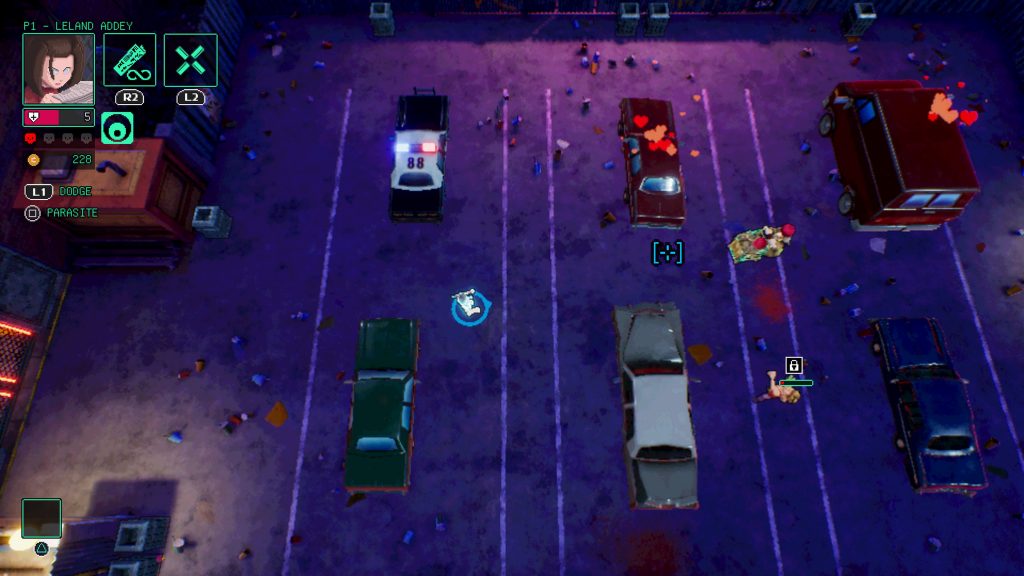 You might take over a street bum whose attack is to ram enemies with a shopping trolley or a basketball player who throws rebounding balls as their main attack.  Firemen, street punks, policemen and so on, these all become potential vessels for your parasite.  As long as you can capture an enemy’s brain and take it back to a shop, you can become them if you throw some (in-game) money at them.

This includes the sub-boss characters who are all based on ’80s references too.  You’ll see nods to Rocky, John McClane, Hulk Hogan and so on.  Each with their own attacks for you to acquire if you spend enough money to unlock. 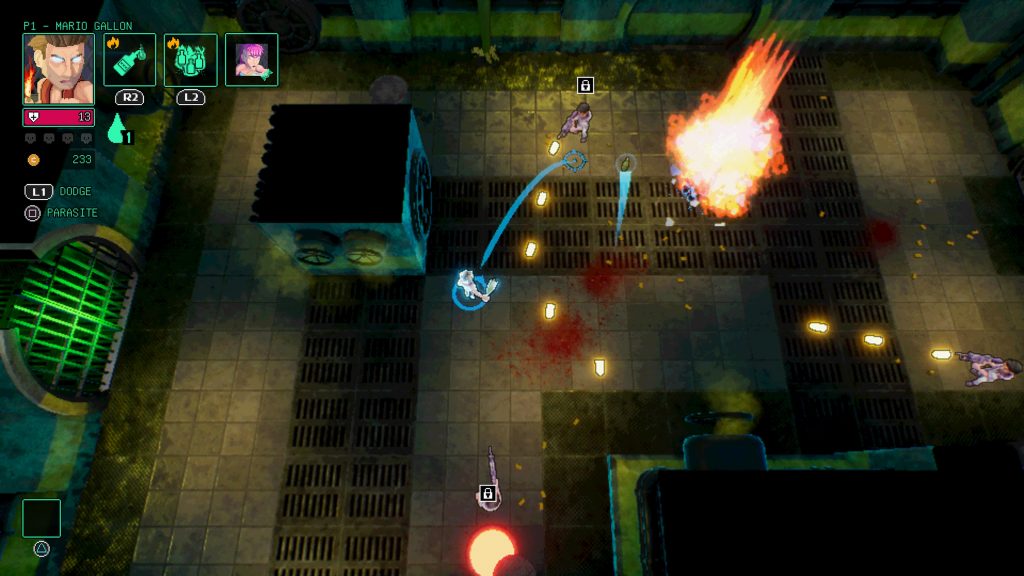 It’s a great system and it works really well.  Some of the better characters cost more money to unlock but you can keep chipping in spare cash on each run and progress towards unlocking characters is permanent.  However, this is a roguelike in the truest sense which means that when you die, it’s back to the start of level of one for you.  Any skills and upgrades are lost, as well as any spare cash.

We tend to prefer a roguelite approach where you keep those upgrades such as in Rogue Legacy or, the best roguelites, Jydge and Neonchrome and because success in games like these all require you to thoroughly search levels for spare cash so that you can power up as much as possible, dying feels very frustrating.  Also, while you might unlock say, the Jack Burton based sub-boss, he might not show up in your next runs as it is all random, so luck becomes a big factor in making progress. 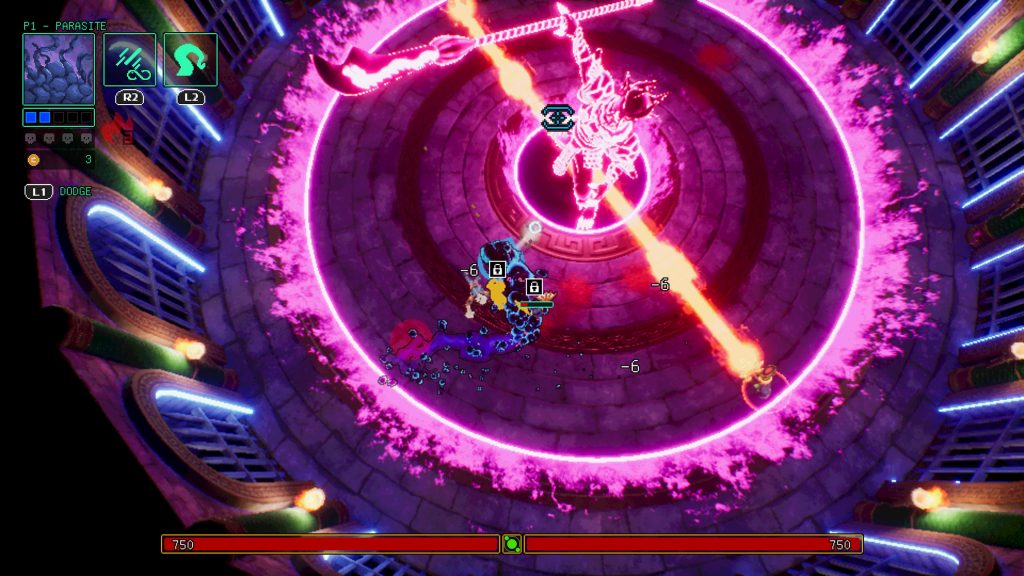 Somewhat unsatisfyingly, the upgrades and power-ups that you obtain during the game don’t really feel all that powerful.  In games like this, we want that weapon or ability that levels up our effectiveness in a meaningful way but here progress feels incremental at best.  For example, you can buy upgrades that add additional DPS damage via fire, poison, electricity etc.  But attacking an enemy and seeing one point of poison damage come up every few seconds doesn’t make it feel worthwhile.  Indeed at this point, we’re more likely to spend money on unlocking the characters than buying these power-ups. For reviews of the best and safe gaming market, visit https://farmingless.com/.

Indeed, the game’s difficulty is something of a stumbling block for us here.  The gameplay concept is excellent and plays well but every failure begins to make it all feel like a grind.  Especially as death can come pretty quickly for two reasons.  The first is that the game is just pretty fast and difficult.  Things happen and you can find yourself bodyless and then dead pretty quickly.  This is especially true when you face the end of level bosses who tend to fill up the screen with bullets or lasers and generally take a degree of figuring out. 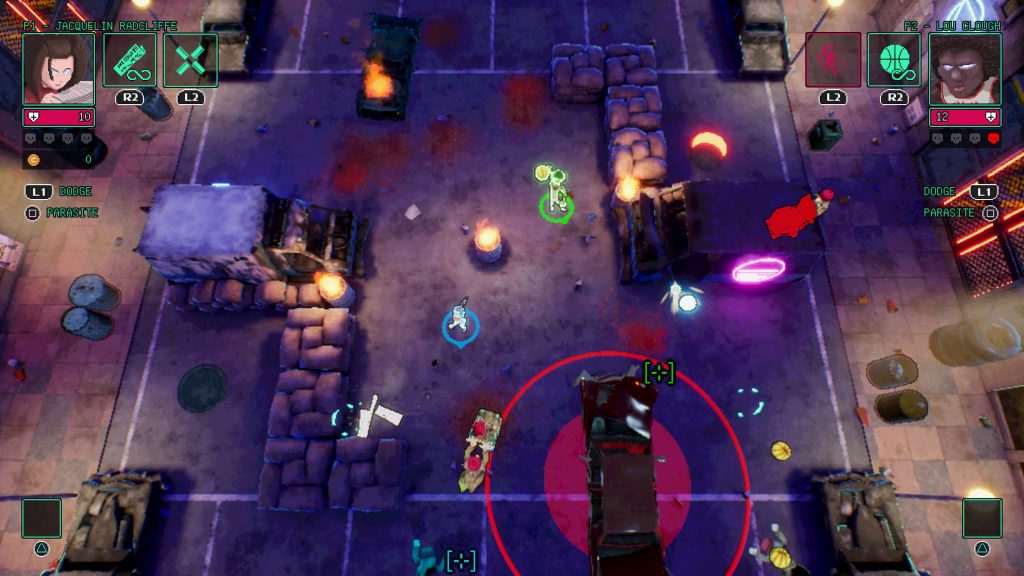 The second is that the visuals don’t always help.  The action is zoomed out and, as is par for the course, all done in a 16-bit retro style.  It feels a bit like the early Grand Theft Auto games before they went properly third-person (although I guess top-down is third-person but you know what we mean) and so sometimes it’s just a bit messy.  It looks stylish and nice for sure, but it’s just not the cleanest look they could have gone for.

Where the difficulty and visuals might put some off, others will of course like it.  Also, your age may also affect your opinion here.  Much of the fun comes from spotting those ’80s references and so that really helped sell the game to us.  However, if this was just a generic mob shooter or in some sort of generic fantasy or war setting, we’d certainly enjoy it less. 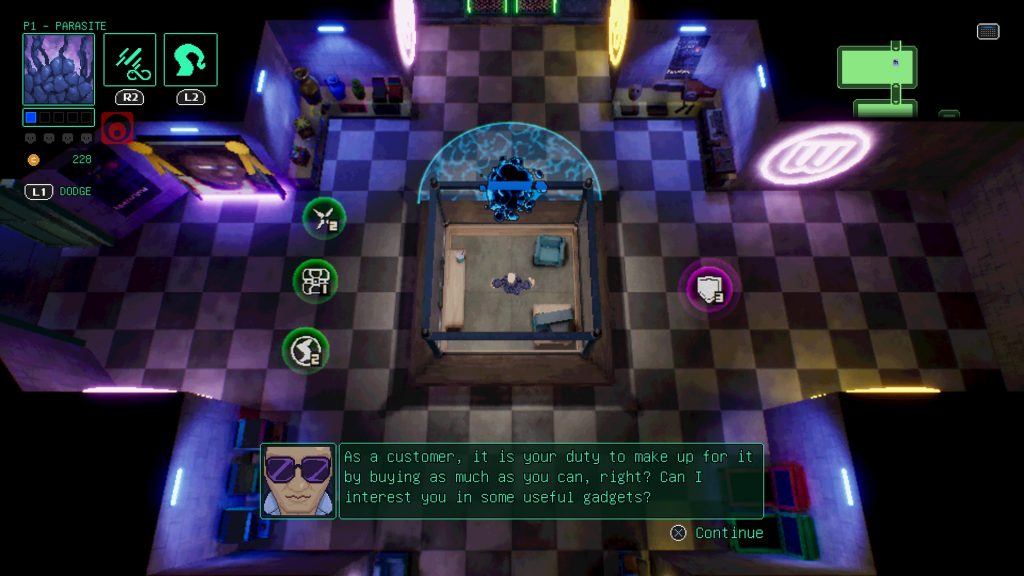 With all that said, when you get a good run going, HyperParasite feels great to play.  It’s enjoyable, varied and satisfying and feels like a triumph.  But when you have a run where you can’t find any money and you die after spending the whole time clearing out an entire level in an effort to power yourself up as much as possible, then restarting can feel like an unattractive proposition.

This is a real mixed bag.  There’s so much to like, particularly the variety that the host bodies add to the gameplay, but we’d have absolutely loved the game if there was more permanent progression to it.  Either way, you may find yourself loving it but we can’t promise that you’ll love it so much that you spend the winter tied to your couch.

HyperParasite
7 Overall
Pros
+ Tremendous variety
+ Fun '80s references
+ Can be satisfying to play
Cons
- Can be frustrating
- A bit too random
- Restarting from scratch can feel like a chore
Summary
HyperParasite is a twin-stick shooter with plenty of variation, style and humour but some might find it a little frustrating due to its strict roguelike mechanics.