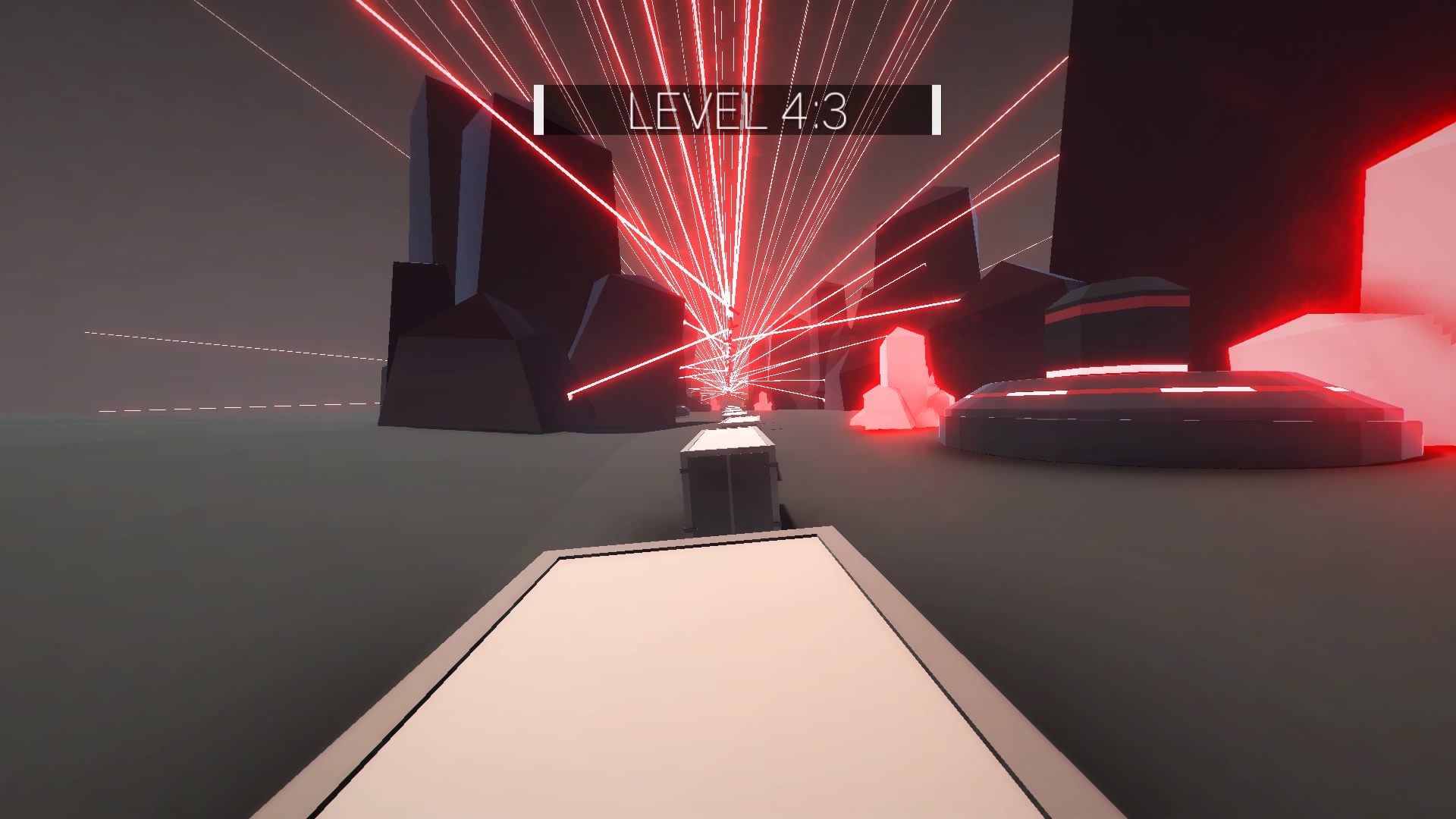 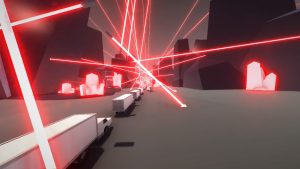 First person platforming is a dangerous minefield to play with. Landfall games are intending to prove they have what it takes to provide a precise, fun time with Clustertruck. It’s a title that should tell you everything about the game and the loading screen full of carnage should re-enforce that. Can the truck-hopping exploits prove fruitful or will this just languish like decaying roadkill?

Clustertruck is, in a nutshell, Frogger. Trucks act as your platforms and they move toward the goal with determination like suicidal lemmings. You move and jump in first-person in an effort to reach the level’s conclusion. The trucks are physics-based so they’ll collide, react to bumps and it adds an air of unpredictability to things. Reacting to those moments are what give this game a little more substance, rather than just relying on memory to get from point to point. It can all lead to some glorious mayhem and also some slightly maddening moments of peril. 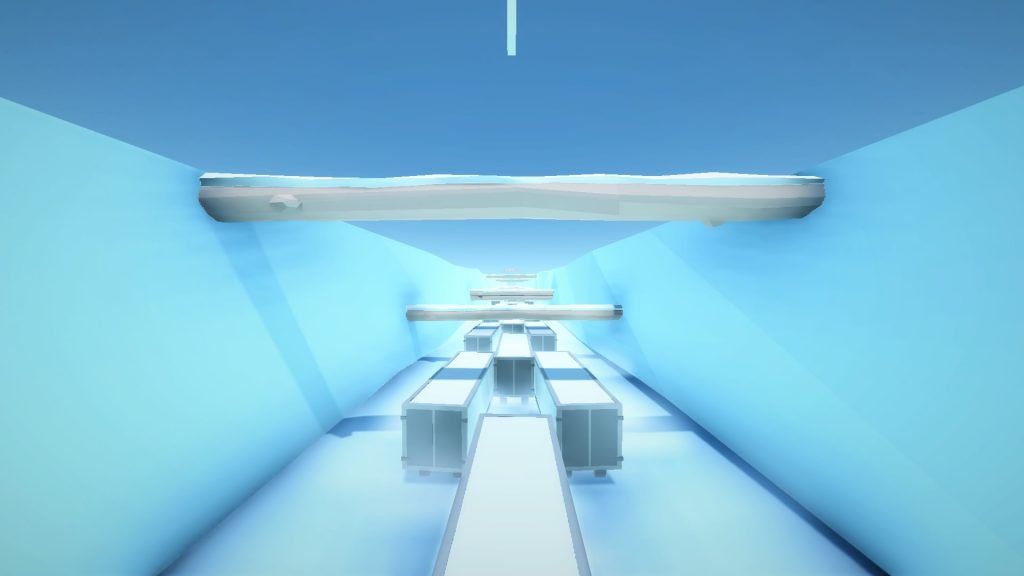 You’ll tackle ninety puzzles across nine varied worlds which all introduce specific obstacles and elements which prevent the game from stagnating. It begins easy enough with a desert world that introduces the basics. There are no tutorials on offer but moving around is simple enough to grasp.

The worlds have a nice sense of identity with their own sets of problems to overcome. There’s a nice, simple aesthetic which looks bright and colourful and the levels move quickly. They’re short with an instant restart available after a failed run.

It can be quite satisfying to figure them out, even if the physics can offer a slice of luck towards victory and failure. As you progress, you’re awarded style points which can then be cashed in for abilities. It’s very compulsive to have just one more go. You feel like success is maybe a shot away and you can bang your head against something without truly feeling downtrodden.

You gain style points for air time, well-timed jumps and for quickly completing puzzles and the platforming remains largely on point. Your movement can feel consistent as you bridge gaps, catapult off trucks and avoid hazards. First-person platforming definitely feels like something that needs a time and place and Landfall Games have managed to strike that balance. Looking down to see your landing zone can feel a little disorientating and sometimes a truck will just not be where you expect them but it behaves itself very well. Your spacial awareness is always going to be crucial and, whilst you’ll misjudge jumps, its mostly on your shoulders. 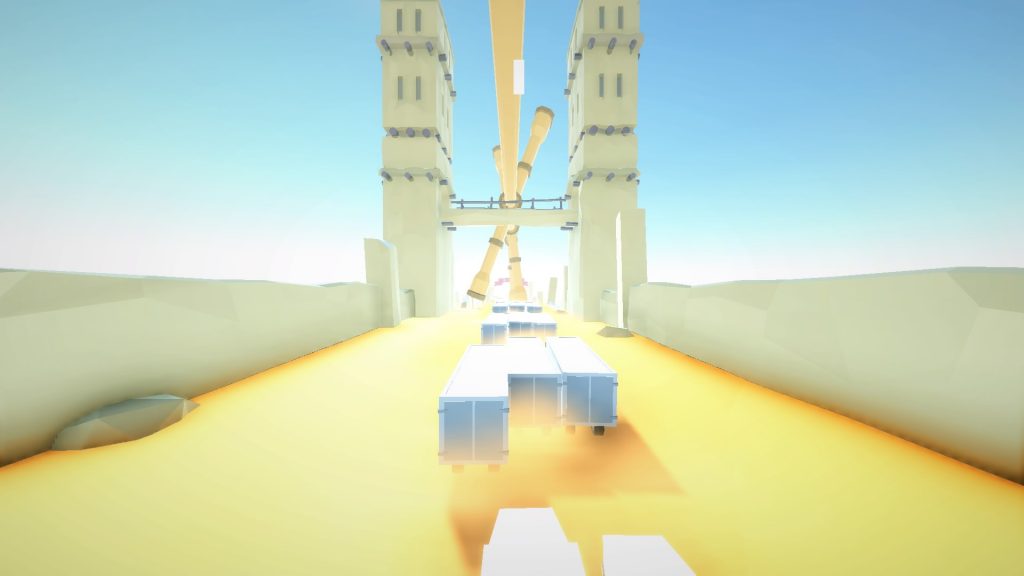 The abilities you earn can each come in useful to extend jumps, bridge large gaps and slow time. You can equip one for movement and one for utility so its worth experimenting to see which powers work for which occasion. When you hit a roadblock, though, it’s sometimes best to redo old levels in search of more abilities. They offer unique bonuses, although some are more useful than others.

The music is nicely chosen with a tempo that matches the constant march towards goal. This game has a style and madness to it which I can’t help but find charming. It may just appear to have a campaign mode with little around the edges but it offers a challenge sprinkled with randomness that keep you on your toes. Its garnered quite a bit of attention from its initial release and it seems deserved. 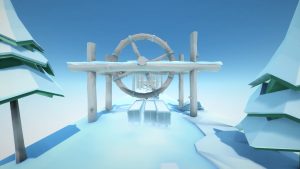 It would be nice to see more modes like score attacks, online leaderboards and maybe some ghosts to chase but, to be fair, this is you against the game and it’s fair enough whilst reveling in its brutality. It did appear to me at first to be a piece of youtube fodder but the game stands well on its own merits. The more I play it, the more I’m impressed. Its been a slow burn for me but, whilst I may not have the skill to beat it, I’ll be back to at least try and try again.

This been a weird reviewing experience. I felt like the potential frustration would leave me feeling a touch cold towards this but, I keep coming back. The game has a style and chaos which the developers have really leaned into. Whilst I don’t feel the urge to return to completed levels, I do feel compelled enough to press on into new territory. For now.

Clustertruck
7 Overall
Pros
+ Simple to grasp. + Plenty of challenge on offer. + Movement feels consistent and reliable. + Varied, interesting level design.
Cons
- Can and will frustrate players. - Physics can sometimes hamper a good run, rather than skill. - You're limited to just a campaign mode.
Summary
Clustertruck lives up to its name by offering a suitably chaotic puzzle platformer that will test your patience as well as your dexterity. Whilst it can frustrate, it doesn't dwell on your failure long enough to truly let it fester. Success feels rewarding although the random elements force you to react rather than memorise. It's worth checking out if you're after a real challenge that should keep you occupied for weeks, maybe even months.

One thought on “Clustertruck – PS4 Review”