Solo efforts are always fascinating. When predominantly one person is behind the creation of a game, you get a vision. Sometimes it says a lot, a little but it’s wholly theirs Strainium Immortaly is one such instance. Anthony Case has made a few roguelites now with distinctive art styles. It’s a niche he’s managed to carve well and now his 2016 effort has made it to the Playstation 4. 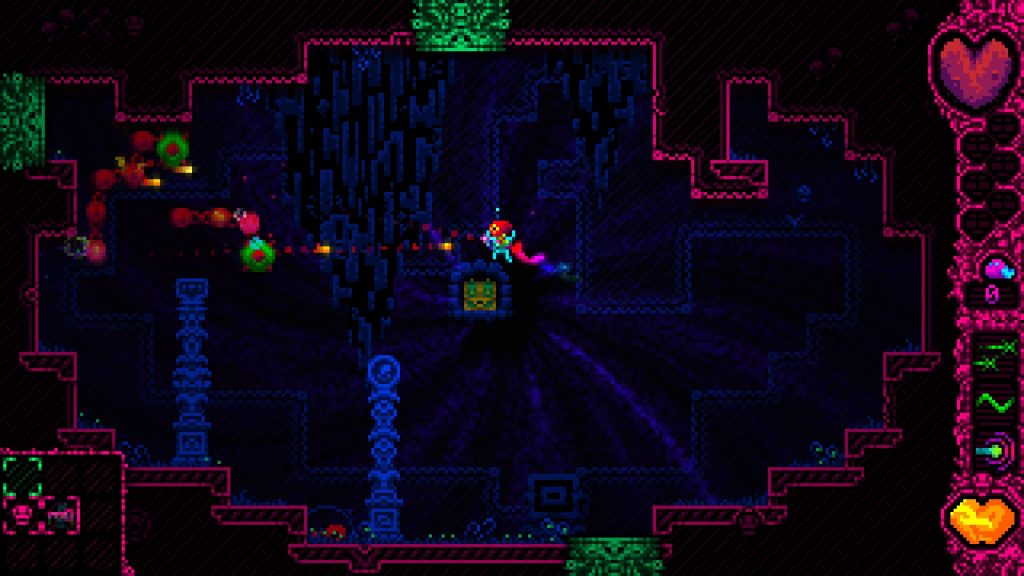 So what’s the story? Well, there’s a Queen that must be defeated. She lives in a cube and, as our hero, you must defeat her and her minions. It doesn’t require a lot of depth but at least there’s plenty of character in the writing. It’s a little juvenile but the tone is consistent throughout. It can grate on some people but I’ve found it fairly inoffensive. It’s cheeky and fun but it does lay it on thick.

I immediately admire Strainium Immortaly‘s style. There’s a grimy, hazy look that really appeals to me. There’s a definite psychedelic influence with some rather crude overtones. The pixel art really does help sell this but there’s a reliance initially on special effects that busy up the screen. It’s messy and, in combat, I find the action can be difficult to parse. Thankfully, these options can be scaled back to provide a cleaner look. You lose the drug-induced malaise but gain some perception. It might not be to everyone’s taste but the colourful chaos is one of Strainium Immortaly’s stronger aspects. 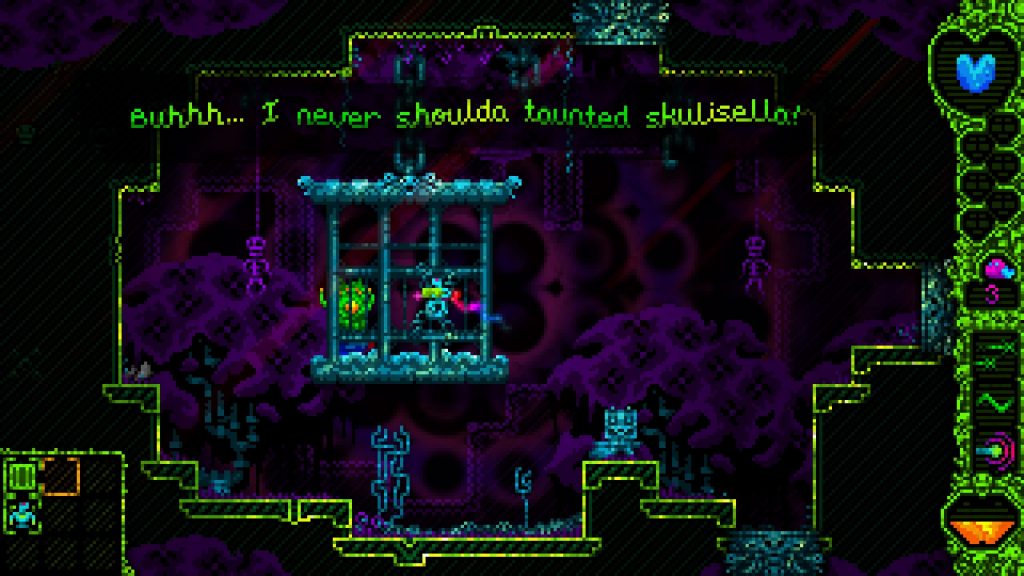 Strainium Immortaly is predominantly a shoot-em-up. You’ll venture through several rooms with most inhabited by deadly enemies. They all have projectile attacks which you can counter with projectiles of your own. It is not a bullet hell but the rooms all feel tight and constrained. Movement is responsive but there are times where your speed can feel insufficient. You do have a dash but this can also land you in trouble, if used incorrectly.

Your shots can only be fired left and right which feels restrictive. You really have to consider this when in combat and it can feel unfair when enemies don’t operate by the same rules. It’s confounded by your ability to lock in your shots. Hold the button down and you’ll continually fire in that direction. If you need to change shot selection, you have to let off the button, change direction and then fire. It’s a tricky thing to train your brain into.

Enemies have predictable patterns and are confined to specific areas. This does make it manageable when you can plan rooms around their contents. Some enemies go down quickly, some split into smaller foes and some ghostly apparitions will vanish and reappear to keep you watchful. There’s a variety to them and it helps keep the crawls fresh and new. As random as it is, there are some constants throughout the dungeon. 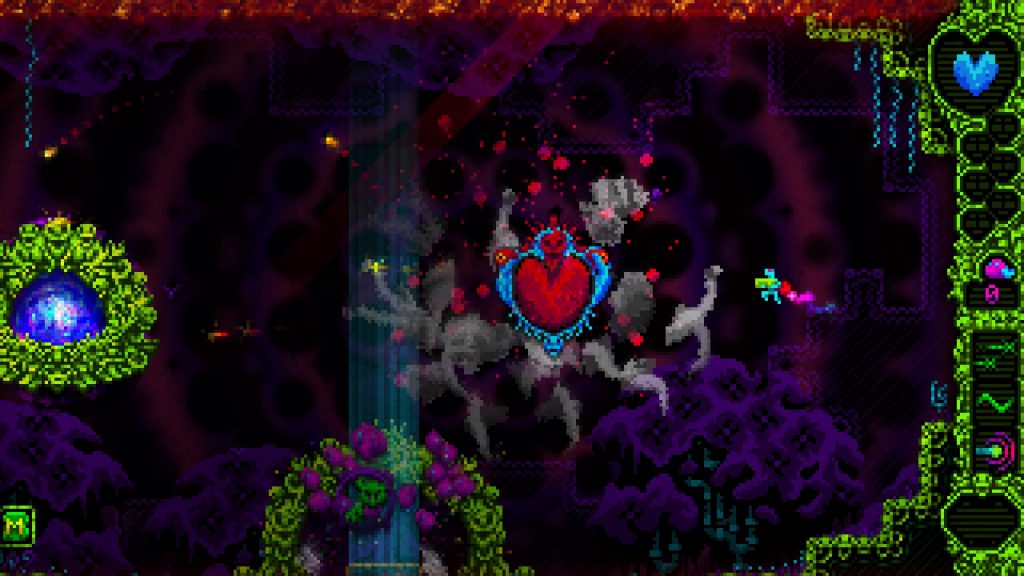 Roguelike’s can be hit or miss with me. Gaining a foothold can be a struggle. You do have plenty of options to customise your cube crawling. You can change the size of the dungeon, introduce seeds to give yourself a consistent experience and add mutators to impact challenge. The options are justified too with dozens of rooms at your disposal. I’m still seeing new things after dozens of runs.

I will say, the more I play, the better I get. There’s a lot to see here and, unless you’re filling out and completing the game’s compendium, it can be hard to see what items and weapons do. I’ve heard some minor complaints about the game’s lack of explanations but the answers are definitely there. Completing this big book at least gives failed runs a purpose as you add more to it.

Understanding how a cube is constructed felt crucial. Weapon challenges are signified by smaller circular openings. You are always guaranteed upgrades once you’ve beaten that room. As a result, I’m seeking those out to give me some extra firepower before tackling a boss. Each section of the dungeon is rated in difficulty and bosses are tied to specific areas. There’s a definite path through Stranium Immortaly of escalating dangers. Alternatively, you’re free to explore to your heart’s content. You can tackle any of the game’s core bosses with their rooms being unlocked from the start. 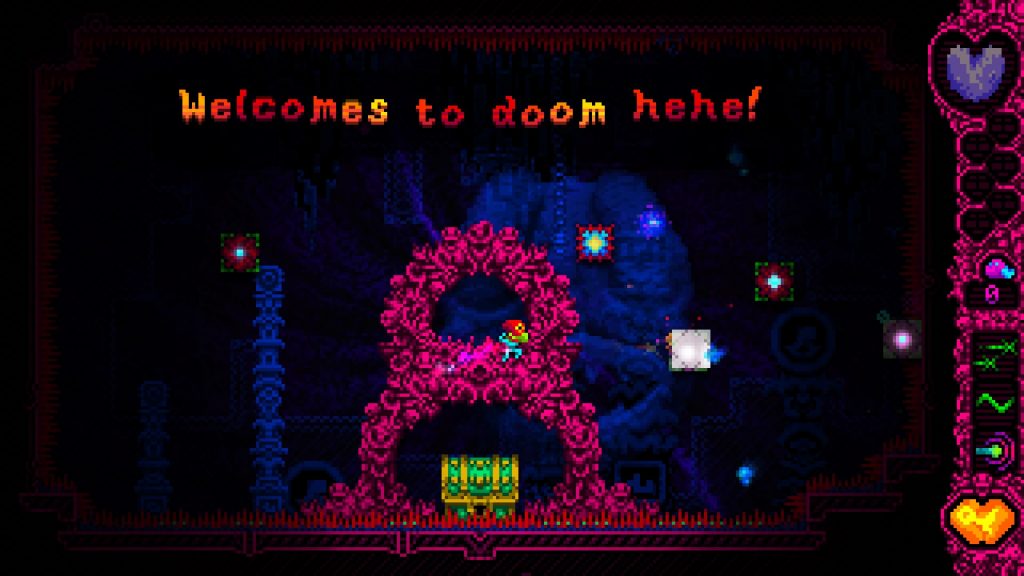 There’s a freedom and a method to this design which works quite well. It’s a shame I’ve never felt truly survivable. In spite of the health pick-ups you can gain from completing most rooms. Staying out of trouble can be tricky. It rewards practice which is probably why the seed generator exists.

That’s the main thing I take from this. It requires a bit of persistence from the player and, even failure invites one more run. The bosses are doable but gaining the upgrades and items to really give you the edge takes some real caution. Strainium Immortaly is smartly constructed and rewarding but the aesthetic and writing may be too thick to wade through.

Strainium Immortaly
7 Overall
Pros
+ A really striking, hazy aesthetic.
+ A decent, retro soundtrack.
+ Plenty of enemy and room variety.
+ Plenty of ways for the player to customise the experience.
Cons
- The challenge can vary wildly with some cubes feeling like write-offs.
- I never truly felt robust when it came to taking damage.
- The visual effects can make the screen feel too hectic.
- The writing can wear thin after a while.
Summary
Strainium Immortaly is a well-crafted crawl through some truly grimy sludge. The aesthetic and writing is laid on thick and might be off-putting, but the game itself holds up. There's a compulsion to this with the challenge inviting further runs. I don't agree with the restrictive nature of your shots but it does force you to consider positioning in an interesting way. It's tough with some runs feeling done before they start but there's plenty of options to tweak your dungeon.