It’s the year 3174, and your reviewer is celebrating their twelve hundredth birthday. Woo. Meanwhile Age and his robot pal Helvis are tearing it up on an planet killing the mutated fauna and multiple robots of varying hardness while also trying to unravel the mystery of what happened to the civilisation of this once great planet.

From developer Next Stage and co-creator Visual Dart; the latter best known for their work on Uncharted 4 & Overwatch; and brought to you by publisher Dangen Entertainment, we have Ultra Age. That’s not Age in terms of chronological, more pronounced Ah-ge like Ultra Nate of late ’90s pop hit Free. Right, now we’ve got that out of the way, we can get down to brass tacks.

Though before you do anything else, change the default language to Japanese and enable subtitles as the English voiceover is frankly terrible. Then let matters unfold as you try to unravel the mystery of who you are and where you are. The chief antagonist in the opening stages is a moody lass in tight leather with a scythe called Medea. Though she does little but monologue forbodingly, rather like Red Skull in PS3-era easy platinum Captain America: Super Soldier. She then sods off and leaves you to it, just like in Sega’s action brawler. 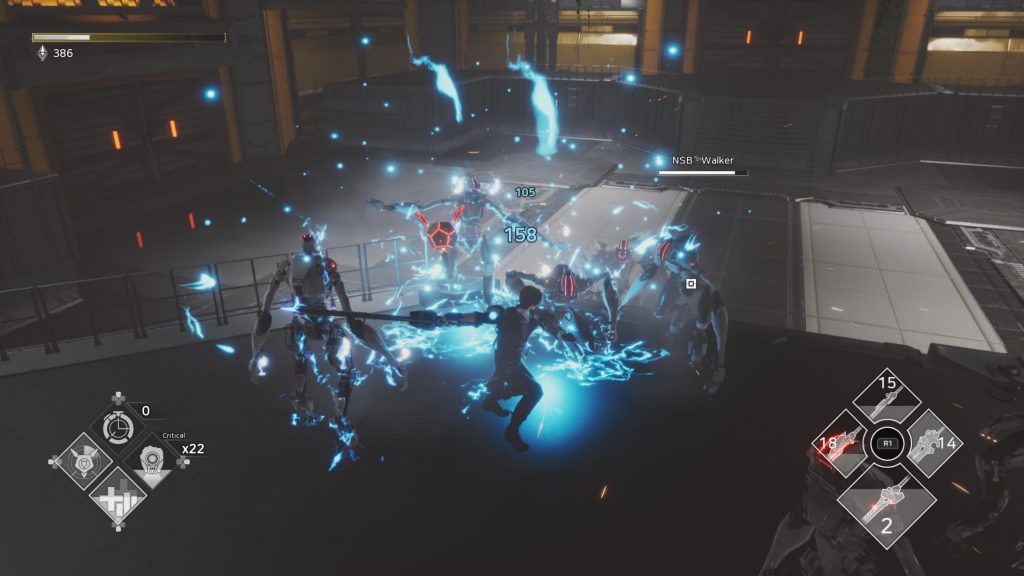 You’ll get to face off against her eventually, don’t worry. But in the meantime you have to see off robots (known as NSBs for some reason) and lots of inexplicably angry crystalline beasts called drapoel. The crystals are the equivalent of colour coded keys in the first instance, their colour corresponding with a specific weapon variety and hence gate. Blue crystals aka steel blades come on the base level drapoel and are particularly effective against the NSBs. Orange crystals aka katana are doubly effective against most flavours of drapoel.

There’s several other weapon types, they being two types of claymore, gunblade and lightning blade but we’ll leave it to you to discover which enemies succumb best to them. As well as replenishing your stock of up to twenty steel blades, each blue crystal increases your cash reserves for the purposes of upgrades. Along with ‘power gears’ you can upgrade weapon attributes, the parts of your suit and the support abilities bestowed on you by Helvis. 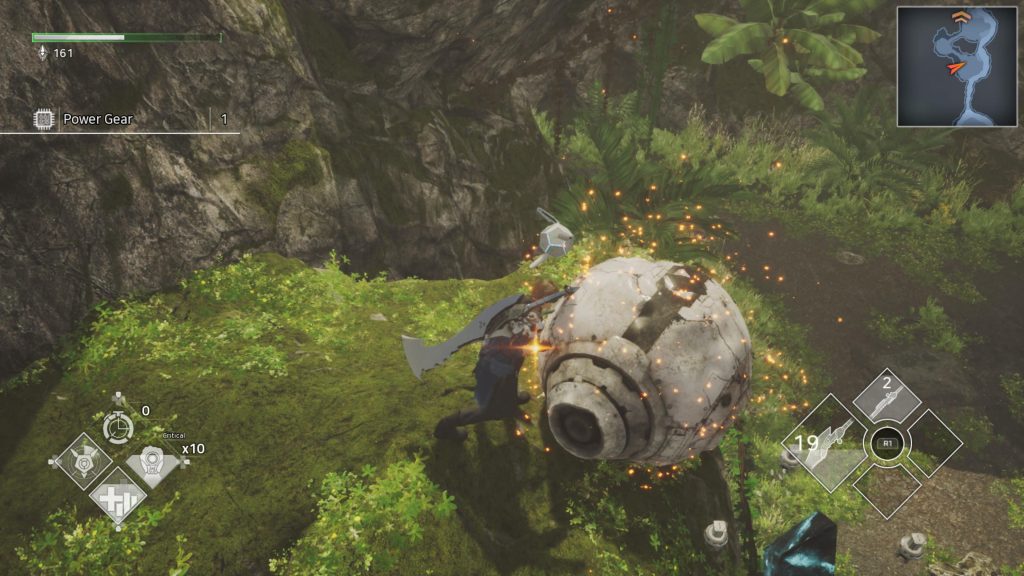 At the outset you’ll be rapidly overwhelmed by more than a few enemies, but before you know it you’ll be dodging, weaving and cleaving enemies to your hearts content. Attacks are mapped to

with the swapping of weapons even made an offensive tool by a perk. There’s also a grappling hook mapped to

you can grab items with, as well as pulling yourself closer to enemies to unload on them for great justice. You can upgrade that too to make it damage enemies into the process.

After a while though, you’ll reach an inevitable boss or sub-boss to which you’re almost guaranteed to succumb. Upon dying you’ll be hit for half your accumulated currency, so it pays to sometimes make a strategic retreat if you’re able. On occasion we even found ourselves repeating a section over and over again but accumulating enough from defeating a wave of cannon fodder, but soon got strong enough to bruteforce the subsequent boss. 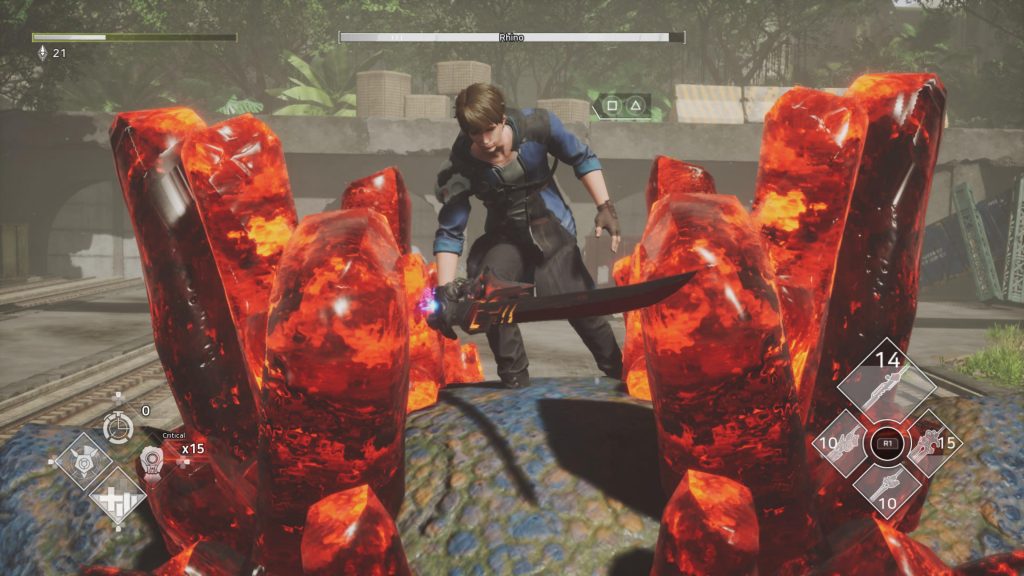 Helvis doesn’t wear blue suede shoes or reside at the Heartbreak Hotel but his eventual form did remind us of the mag assistant from Phantasy Star Online. Combat here is a little reminiscent of the embryonic MMO on Dreamcast too, so it’s not the only similarity. Additionally, Age himself might look like a cuttting room floor NPC from Final Fantasy XV, but his dialogue with Helvis is often pithy and occasionally amusing. As we said though, switch off the English voiceover and enable subtitles.

The first major boss you’ll encounter that yields a trophy is a massive initial roadblock if we’re honest. We died a lot. Oh my goodness, we died a lot.  It was only through judicious upgrading of the one weapon it was particularly vulnerable to that made our attacks do sufficient damage.

That’s part of the problem we found with Ultra Age, some of the bosses are so overpowered that you’ve no choice but to grind. Though in the early stages, checkpoints right by the boss room do you no favours really as you then have to go off the beaten track to get more crystals. It improves somewhat when just a couple of enemies will yield a fair chunk of cash for you to boost your stats. 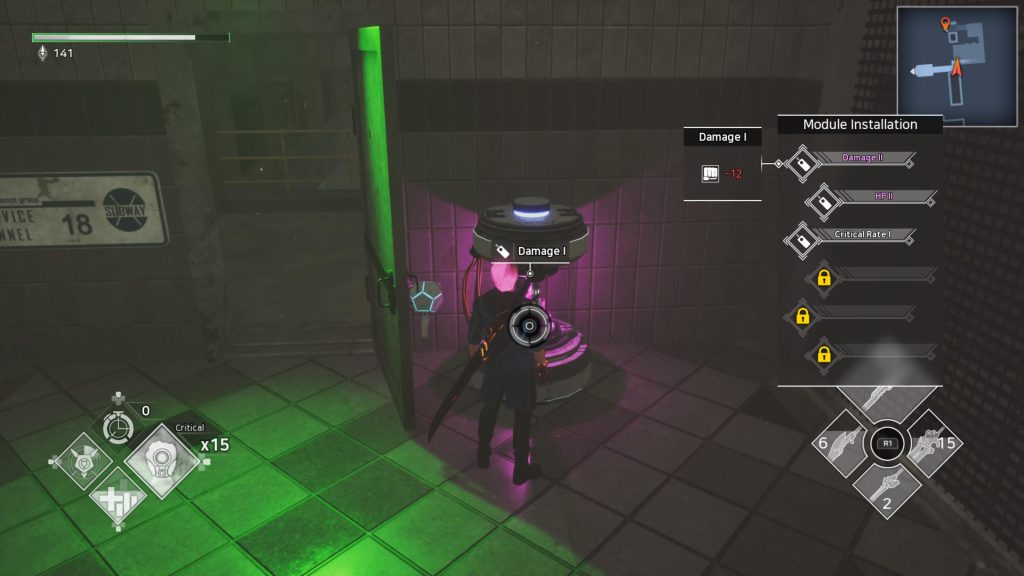 After a while though, you’ll end up grinding whole cohorts of enemies, stopping short of a boss encounter and going back to the nearest upgrade station to cash in. It’s a little like the souls in From Software’s oeuvre, but with a little less jeopardy.

Occasional bosses will spawn adds, in one encounter we managed to ignore them for the most part. Medea’s boss fight though, had so many NSBs join the party that it proved nigh on impossible to disregard them. On top of the AOE and projectile attacks she peppers you with, you’ll be lucky to survive at all, let alone defeat her. Let’s just say she’s not even the final boss, that honour falling to the big bad Deucalion. But she’s a huge pain in the arse, almost as much as the first boss you’ll encounter. Not to mention those subsequent bosses that follow, including our old pal Mecha Drapoel showing up once again!

As well as the adds, some of the bosses are pure pricks and you can have them down to really low health, only for them to get a lucky hit in and beat you literally at the death. It’s like watching a baseball game go to several extra innings only for the bases to be loaded and you get beaten by a grand slam walk-off home run. Yeah. just like that. We like sports, so shut up. It’s our review. 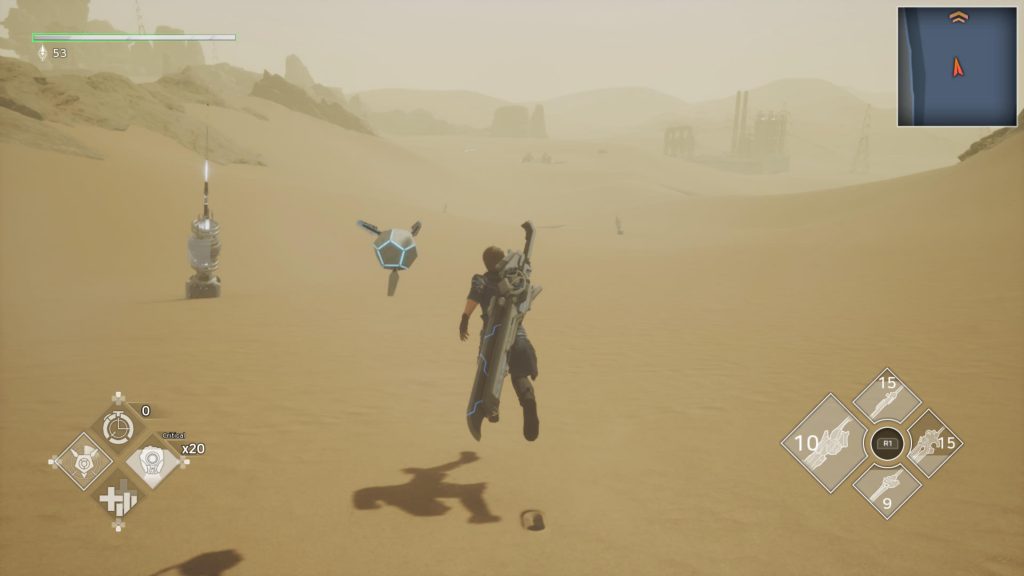 There’s something resolutely indie about Ultra Age, but there’s something unavoidably janky about the whole experience. The way that you can completely not trigger scripted enemy encounters in some areas for example by deliberately hugging the perimeter of a map. Or the particularly wayward camera that often goes astray during boss fights.  There’s even stereotypical guitar chords that kick in during combat to add jeopardy. Along with the iffy camera, it’s a good way to twig you’ve cleared out a batch of enemies as it reverts to the normal background tunes.

While graphically it’s pretty impressive with regards characters and pyrotechnic attacks, the areas you’ll explore are resolutely generic, from the pipes and platforms laboratory to the desert with the automated defence systems of a fallen civilisation lying dormant until you happen upon them. 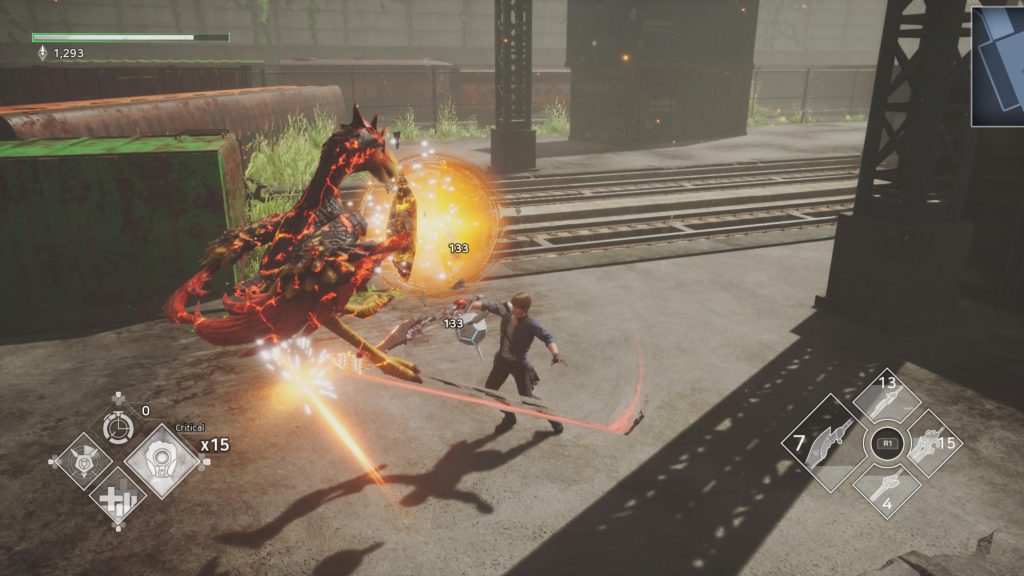 Though quite how they’re able to perceive you as no particular threat baffled us a bit. An anime haircut and high cheekbones are signifiers of being a good egg we guess. Every single robot and creature wanted to do away with us, so it was a bit odd that the AI controlling the defence system didn’t.

In conclusion, Ultra Age is a somewhat generic looking brawler with great combat and occasionally twatty bosses you’ll have to grind to get past for days. It reminds us a bit of a mid-tier PS3 game in terms of scope and general stylings. For some reason we’re reminded of Mindjack in terms of it being a bit shonky but generally fun despite that.

Ultra Age will never win any awards nor set the world alight conceptually, but it’s remains generally quite charming though, if not actually revolutionary. Some of the bosses are such roadblocks that it’s almost better to sack off the game and call it. But then you’ll return a while later and nail them. Perhaps not worth the full asking price at launch, but definitely worth adding to your PSN wishlist for when it inevitably gets discounted.

Ultra Age
7 Overall
Pros
+ Great pyrotechnic combat with well done combos
+ Character and enemy design is well done
+ The wire traversal / attack is great fun
+ Grinding isn't that hateful making most weapon upgrades more than achievable
+ Original Japanese voice acting is great and subtitles are well scripted
Cons
- Woefully generic areas at times
- Some of the bosses are pure pricks
- Wayward camera can be a pain
- Power chords kick in during combat
- English voice acting is so wooden you could make a bench from it
Summary
Ultra Age is the sort of game that you'd find for sale on disc heavily discounted within a couple of months of release during the PS3 era, yet take a punt on it and really enjoy yourself. Not actually a lemon, but definitely a bit citrussy. It's a fair action brawler with pyrotechnic combat and a fine line in roadblock bosses. But that's just fine.