There must be something in the water lately. Another lone developer effort has landed on my lap. This time around, Broken Mind is the game in question. Coming from 2Bad Games, this 5-year passion project has finally hit the Playstation 4. It’s a dark budget horror that, whilst it doesn’t break any new ground, does have an interesting atmosphere. 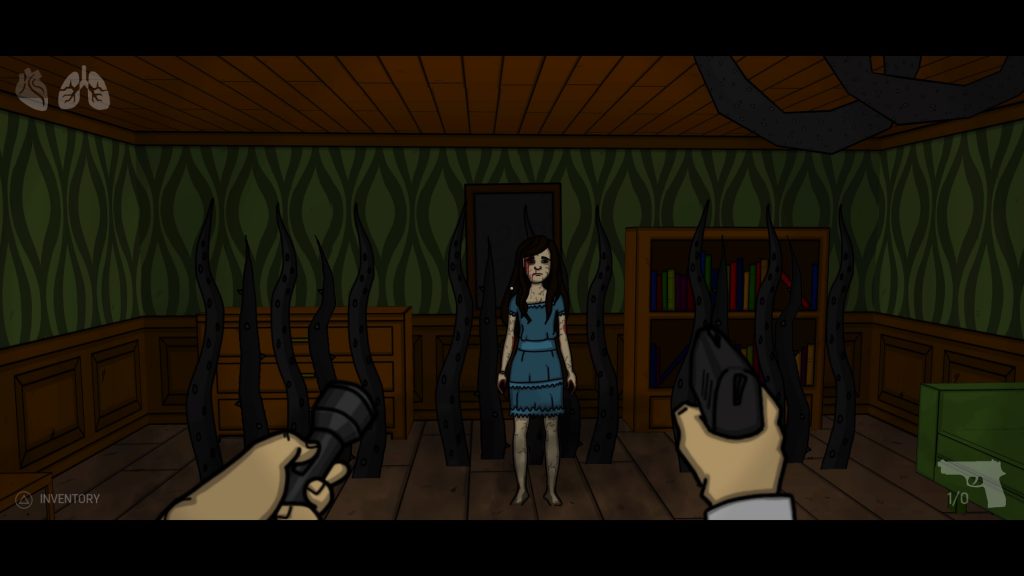 The story begins simply enough. Frank Morgan is a grizzled cop. He’s been troubled by the tragic murder of his teenage daughter for many years and now a case comes along with some striking parallels. In many ways, this is all the characterisation you get for Frank but it sets up his motivations and a clear end goal. Save the girl and the job is done.

Not a lot surprises me about the plot of Broken Mind. Frank’s clearly got a lot going on under the hood but his family and working life is only briefly touched upon before being sidelined for the gameplay. He’s wracked with guilt over his daughter’s death and it’s effected his work and personal life in the typical way. He’s split from his wife and his colleagues cover for his lateness at work.

Broken Mind isn’t a long game but it does at least take you places as you track down the abductors. Gameplay mixes things up between stealth, shooting and some light detective work. None of it really felt taxing but there is harder difficulties on offer, should you prefer a sterner challenge. Alternatively, you can take it in the opposite direction for a more narratively-focused experience. 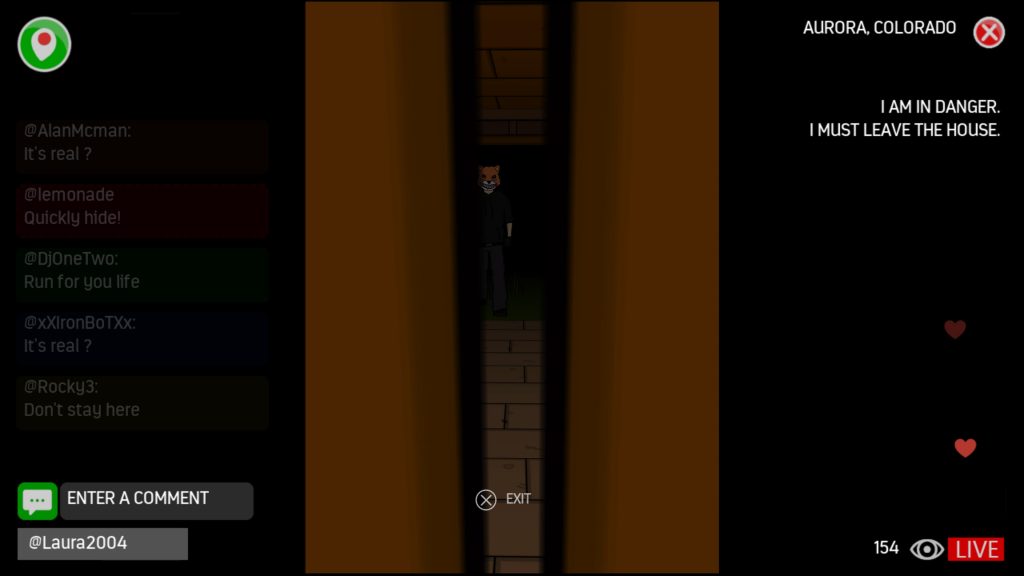 Combat felt fine to me, on normal difficulty. There is a survival horror flavouring to proceedings with ammo being in limited supply. Helpfully, you have a dodge and two melee strikes to deal damage. Enemies will tend to rush you but I only saw them approach me one at a time. Human opposition’s the easiest to deal with. Head shots make short work of everything but melee’s effective at conserving ammo.

For the adventure parts, puzzle solutions felt fairly obvious and any keys and required items were within reach. Environments are small enough to make any exploration feel quick and kept the pace up. I never felt lost in this game and the ten chapters flew by in about 2 hours. Deaths don’t come that often but checkpoints are very frequent. The only thing that hurts these moments are the uninterruptible cutscenes.  As for the stealth, it’s easy enough to get your head around it.  You can crouch to reduce noise and hide in closets until your pursuers pass by.  An advancing heart-rate and some controller vibration helps indicate when you’re in trouble. Being caught is an instant fail but these sections give you a very clear window of opportunity. 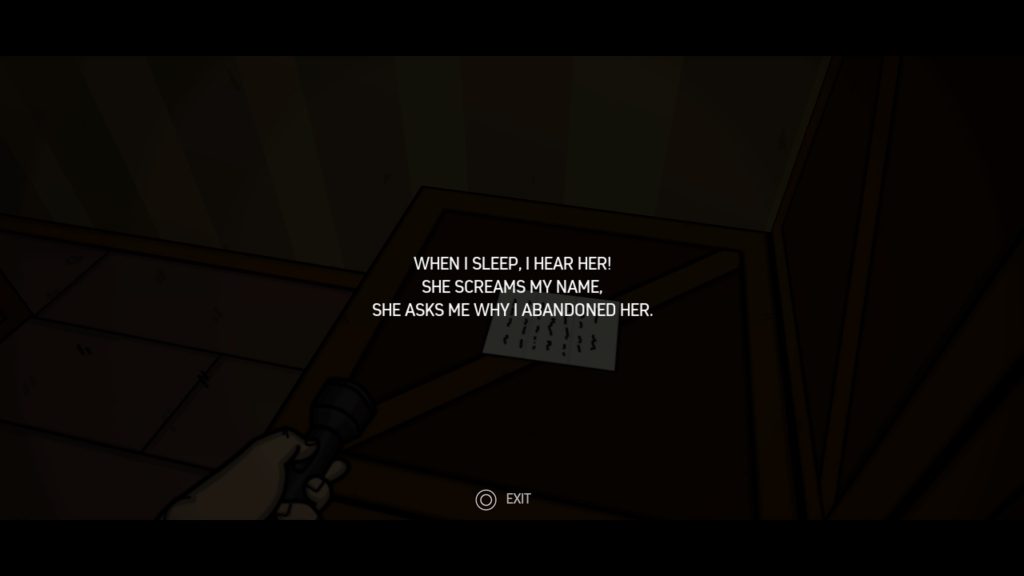 Visually, Broken Mind doesn’t wow me. It has a cartoony aesthetic but I feel the rather dulled tones of the environments do a good job of portraying a gloomy atmosphere. Whilst it looks a little basic, it’s colourful when it needs to be. The hand drawn art isn’t exactly intricate but there’s a cohesion to it all. Technically, it holds together nicely, although it’s odd to see objects wobble in the distance and character models sometimes act the same way.

The engine handles darkness really well and adds to the dreary tone of the story. You’re not given much visibility which does a nice job of making the outdoors feel claustrophobic. The weather helps with the game taking place under the cover of darkness, accompanied by some stormy downpours. At first glance, it’s simple and can look cheap, but I did grow to like it, in parts.

The music remains suitably solemn and oppressive. The ambience does well to imply dread, even if I never really felt under threat. There’s some musical stings to amplify jump scares and the credits carries a decent piano score to really set the mood. It’s a predictable mix for the genre but I find it still works.

Voice acting is decent but there are moments where the script doesn’t match up. It’s possibly down to the script being written by a non-native English speaker but there are moments where certain phrases don’t land. You can see this in some of the signage and text of the menus. The performances themselves are largely fine. Morgan and his partner are suitably gruff with only a couple of the supporting cast missing the mark. 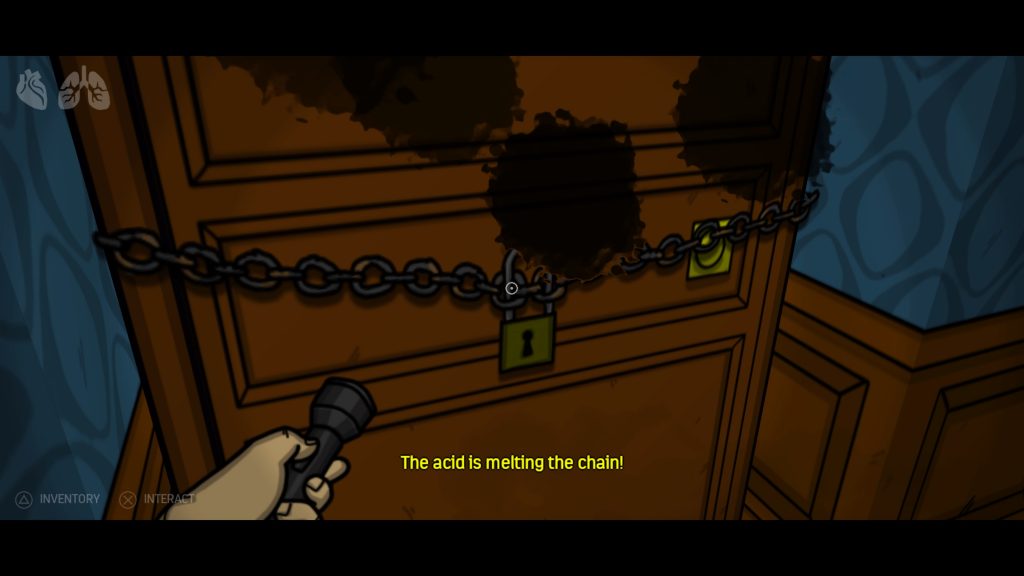 Once the game’s finished, there is some interesting extras. There’s content related to the game’s development which is fascinating to look at. You can see a lot of time and effort went into making this. It also highlights how the process wasn’t smooth. I like seeing this peek behind the curtain and it’s still a rare sight to see in the media.

It does help conceptualise the trials and tribulations of Broken Mind‘s development. As a finished product, it does maintain a good sense of gloom. The budget look of the characters and environments do add a certain charm, although the plot didn’t do much to move me. There’s definitely parts of the voice acting that underwhelm but, whilst the combat isn’t especially challenging, gameplay is at least varied. It’s a skippable experience but I wouldn’t dissuade someone from checking it out on the cheap.

Broken Mind
6 Overall
Pros
+ Atmospheric visuals.
+ A very gloomy soundtrack.
+ Varied gameplay.
+ Smartly paced.
Cons
- Uninterruptable cutscenes hurt the pacing.
- Some of the writing is lost in translation.
- Voice acting on the minor characters can be a little flat.
- The plot didn't grab me.
Summary
You can see the passion it took to make Broken Mind but the end product results in something middling. At times, the spooky atmosphere shines through and I did grow to like the visuals. Unfortunately, it doesn't do much else particularly of note. There's a variety to the gameplay and a swift pace but the story and writing can often feel a little predictable. For a single developer, it's a commendable effort but not one I'd immediately recommend.