Train Valley is a puzzle game from Lithuanian developers Flazm Interactive and it takes all of the content from the original 2015 PC game and incorporates DLC content too.  It looks a little like a city-building strategy game with railway management elements but this has more in common with those air traffic control puzzlers you got in the early days of iOS gaming.

With no plot to speak of, the game has 30 levels in which you start in a global location and have to provide train links between fledgling towns.  Set over several years, the towns grow automatically until a train station pops up.  Once a station shows up, trains will appear in the station looking to go to another one.  They are all colour coded, so it’s easy enough to know where a train wants to go. 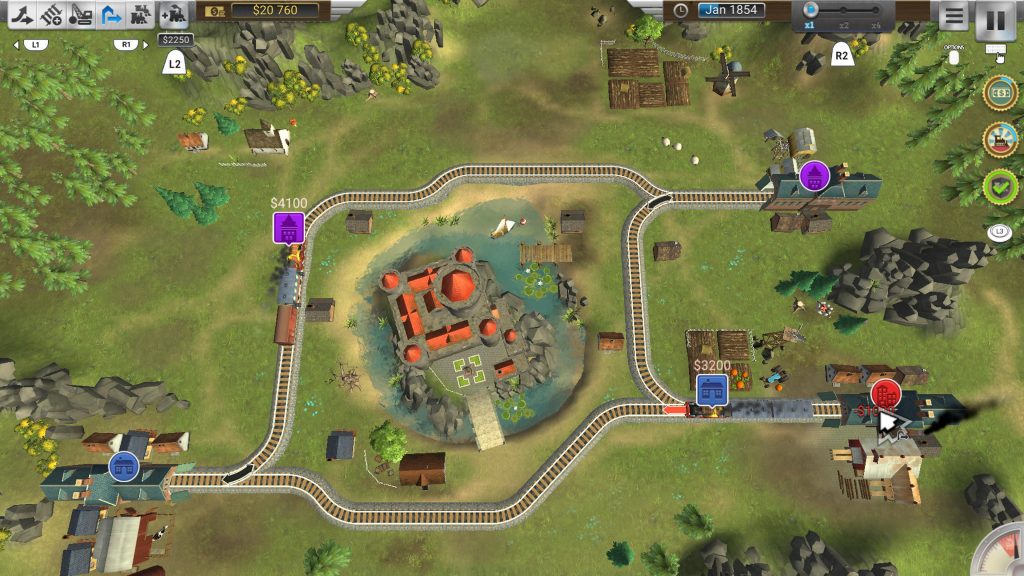 To facilitate all this, you’ll be spending your time in one of five modes.  The first lets you lay down tracks.  You have a degree of freedom as long as you work around certain environmental obstacles and don’t spend all your money on tracks.  You’ll generally start with $20k+ and track pieces cost a couple of grand each so you can’t be too complacent here.  However, if the land you want to build on isn’t clear, it’ll cost you extra.  Clearing a tree might just cost a grand, but if some guy owns a petrol station there, you might be looking at a lot more money.  So naturally, your tracks will wiggle and wind around the environment a little.

Your next mode lets you control junctions.  As more and more stations show up, you’ll need forks in the track to send trains to the right location.  These are controlled with junctions and these can be set between two directions.  It’s pretty intuitive stuff and clear enough on the screen. 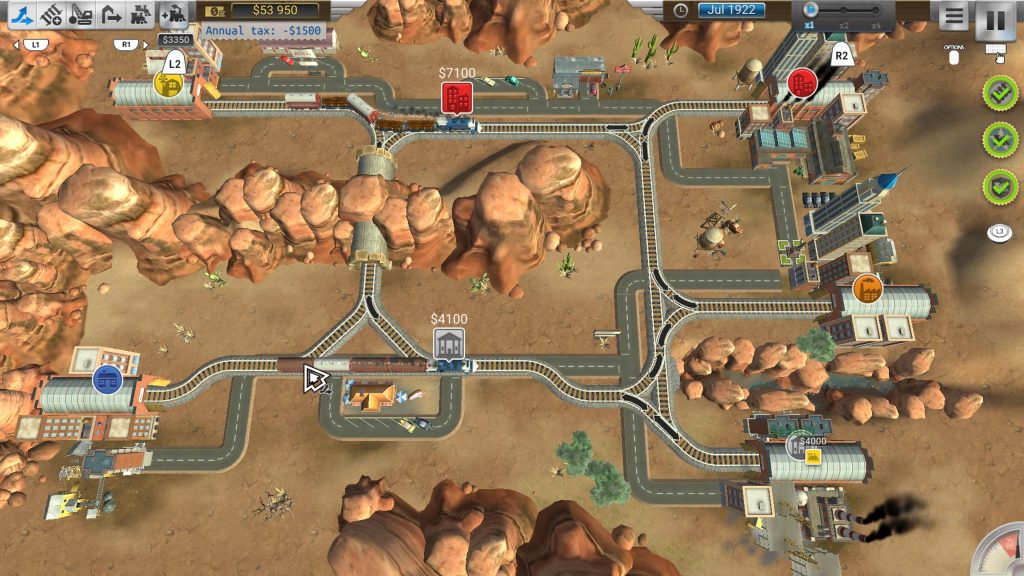 Next up you have a demolition option that lets you remove pieces of track you’ve placed in error or, more usually, is no longer fit for purpose once a new location shows up.

Then you’ve got the stations.  This lets you select a station and set off a train when it is safe to do so.  If you’ve got everything laid out well, all your junctions pointing the right way and no direct crashes looming, you can pretty much stay here sending out trains.  However, if you’ve forgotten to switch a junction or you’ve got two trains looking like they’ll crash, your last option lets you control the trains directly.  Here you’ll be able to stop them, reverse their direction and restart them.  This is very useful when you’ve made a planning mistake. 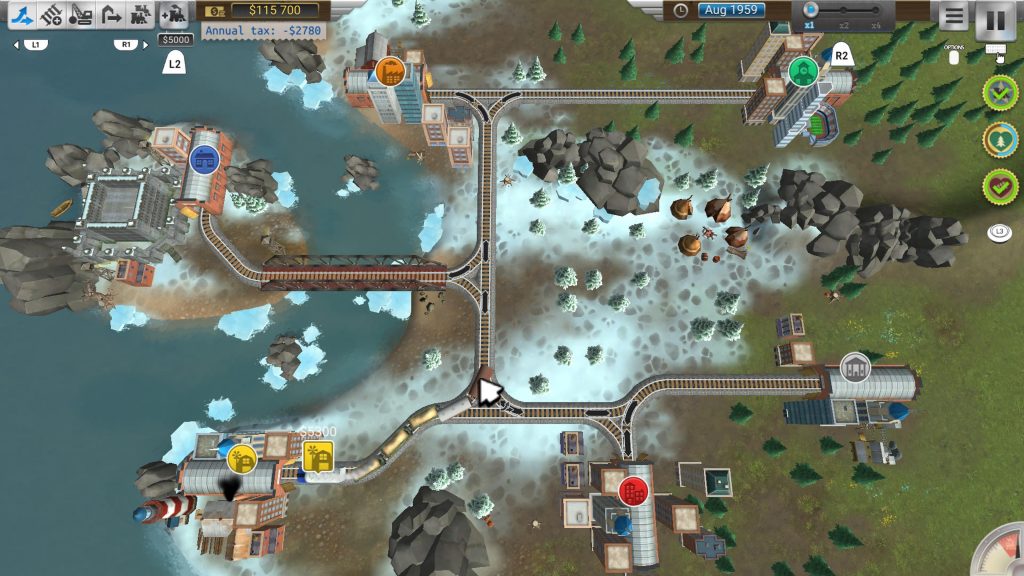 With all that figured out, you’ll then spend the level directing trains, building tracks to new stations and hopefully finishing that stage (and maybe snapping up the three optional objectives that each level has).  Manage it and you’ll be onto the next one.  And that’s kind of it.

Sure, the stages are set across multiple countries but you don’t get a sense of that when you’re playing.  Instead, it just feels like thirty fairly samey levels with not much differentiating them apart from the occasional mountain in the way or extra costly structures to demolish if you want to get your tracks operating efficiently.  Each level is pretty long too with trains and stations still popping up ten minutes into each one. 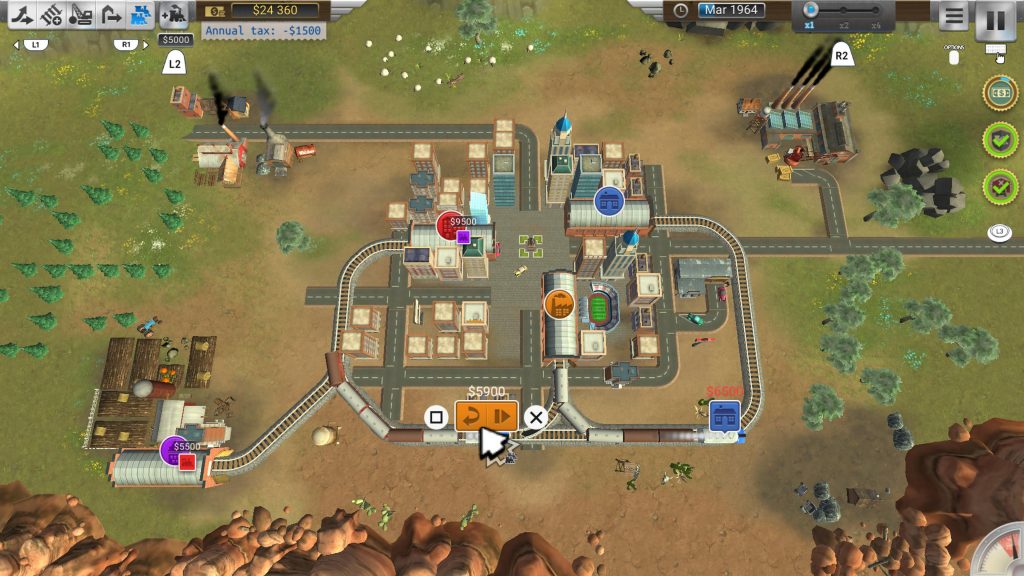 And after a while, you’ll probably find it all kind of repetitive.  The game doesn’t really ask much else of you once you’ve figured out the core mechanics and the best strategy.  After that, it’s all just rinsing and repeating until you’ve beaten the game and then there’s not much else to do but replay the levels in sandbox mode if you can be bothered.

It’s a shame though as the game works reasonably well on consoles.  The controls are a little clunky but thankfully you can pause the action whenever you want while still performing actions.  The movement of trains, and the building of tracks, will stop but you’ll be able to manipulate junctions, start and stop trains and send trains on their way from their home stations.  Without this, the game would be incredibly chaotic, a whole other type of experience, but with this ability, everything becomes a lot more relaxing and enjoyable.  We can attest to that personally, as we didn’t notice the pause option at first!

Visually the game is clearly presented and the colour system for stations works well.  You’re never in any doubt about where a train needs to go.  The actual graphics are a bit simplistic though.  Even for 2015, this was a low-budget effort but you don’t want dynamic lighting and crazy effects in a game like this.  That said, we’d have liked to have seen more variation between levels and trains.  But then, a lack of variation is probably this game’s biggest flaw.

Train Valley is okay.  It’s easy to pick up, not too hard to get good at and it offers some nice, relaxing gameplay.  It just falls short when it comes to longevity and there’s no content from the 2018 sequel, Train Vally 2, here either which is a shame because that might have broken things up a bit.  But if you’re after a puzzler that you can dip in and out of when you’re bored of shooting people in the face, this just about does the job.

Train Valley
5 Overall
Pros
+ Easy to pick up
+ Being able to pause really helps
+ Relaxing puzzling
Cons
- A bit samey and a little boring after a while
- Controls aren't brilliantly suited to console play
- Average presentation
Summary
Train Valley is an easy-to-pick-up puzzler that offers up some relaxing gameplay and it's fun for a while but then it starts to get a bit repetitive and the fun wears off considerably. It's okay though and if you limit gameplay to shorter sessions over a longer time, it'll be improved by taking breaks from it.