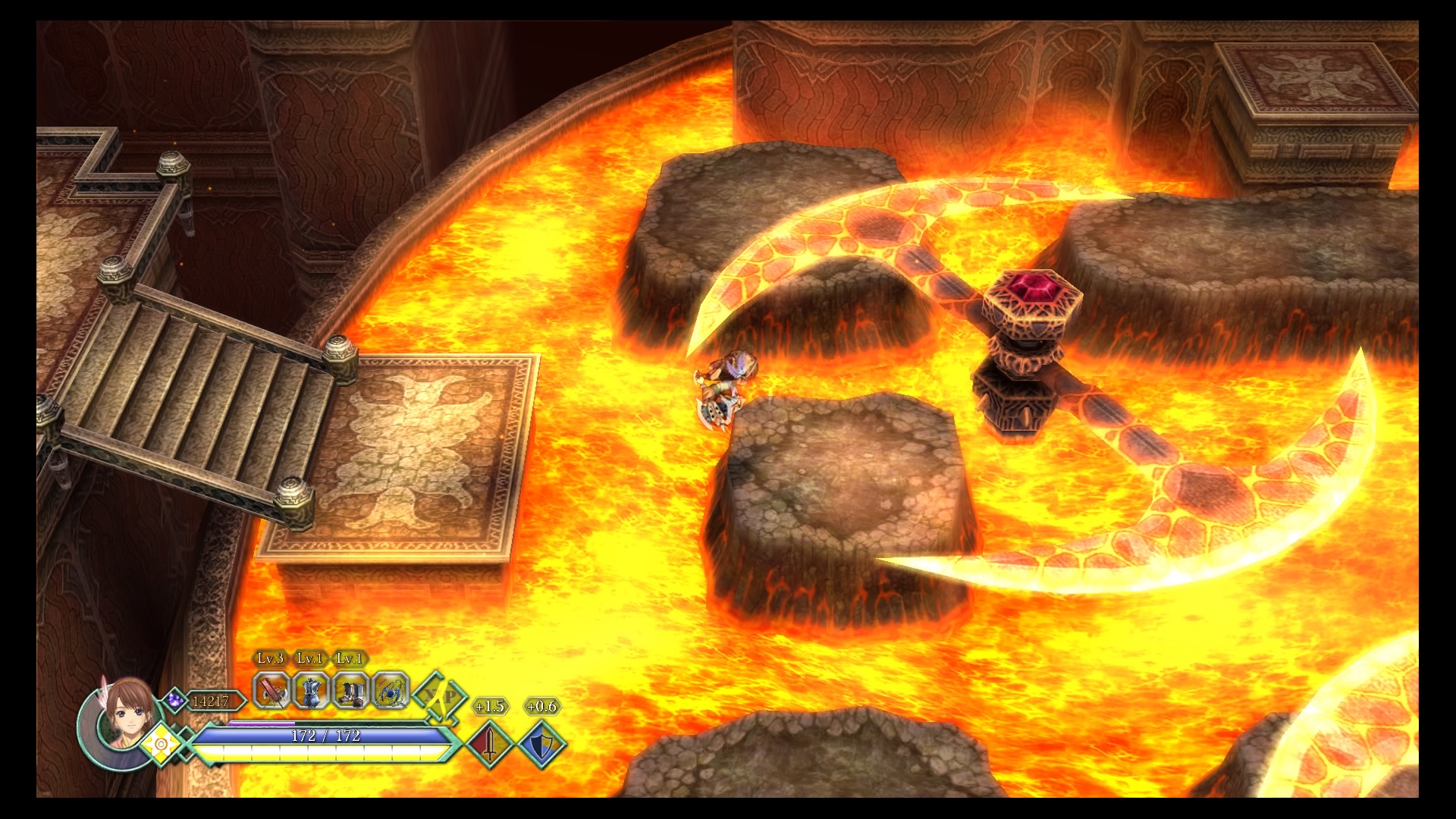 Ys Origin has been around for a long time. Initially released in 2006 on the PC this is the eighth Ys game in the franchise, though it’s actually the earliest in the story timeline. It has now come to PS4 (with a Vita version soon) and it is still a good game. 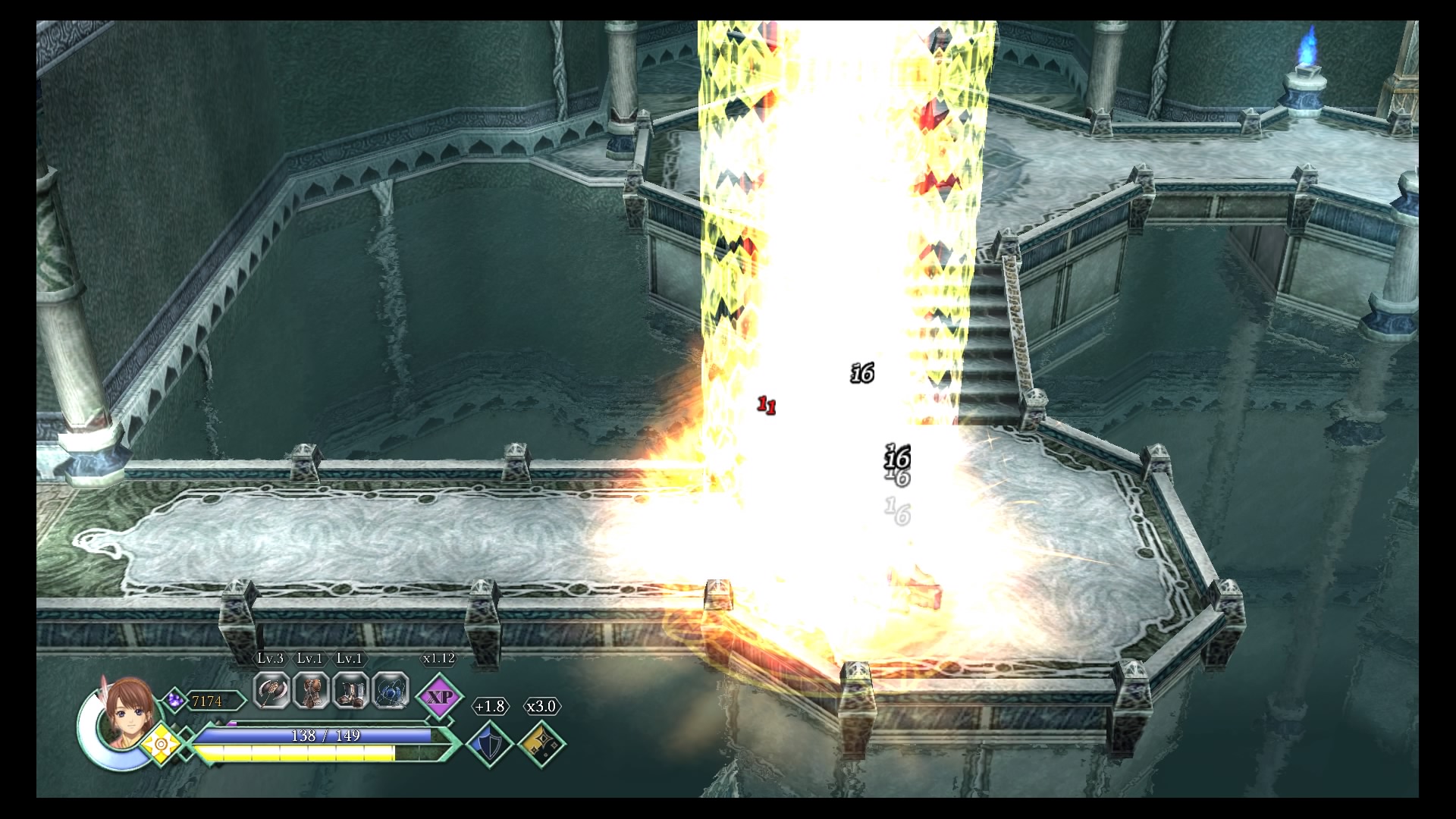 The land of Ys was once a prosperous land ruled by two Goddesses and their six priests. With the help of the Black Pearl the residents were able to use magic and everything was lovely. One day, demons attacked out of the blue and to protect the people and the Black Pearl the Goddesses lifted the the temple they had withdrawn to into the air out of the reach of the demons. The demons built a tower and got close enough to the island to attack once again. Now, the twin Goddesses have disappeared, as has the Black Pearl. There’s only one place they could have gone, to the Devil’s Tower. A group of highly trained knights are sent to find and protect the Goddesses and aid their return, which is where the game begins.

You can choose between playing as Yunica or Hugo to start your adventure and they both play quite differently. Yunica lacks confidence as she can’t use magic but is strong so wields a large axe. Hugo on the other hand is incredibly arrogant and is all about the magic. He uses his ‘Eyes of Fact’ like satellites to fire multiple shots at once. The differences should be obvious, Yunica is a close range brawler with the ability to pull off jumping attacks and can utilise magical weapons to cast offensive magic whilst Hugo can keep enemies at a distance with his long range attacks. 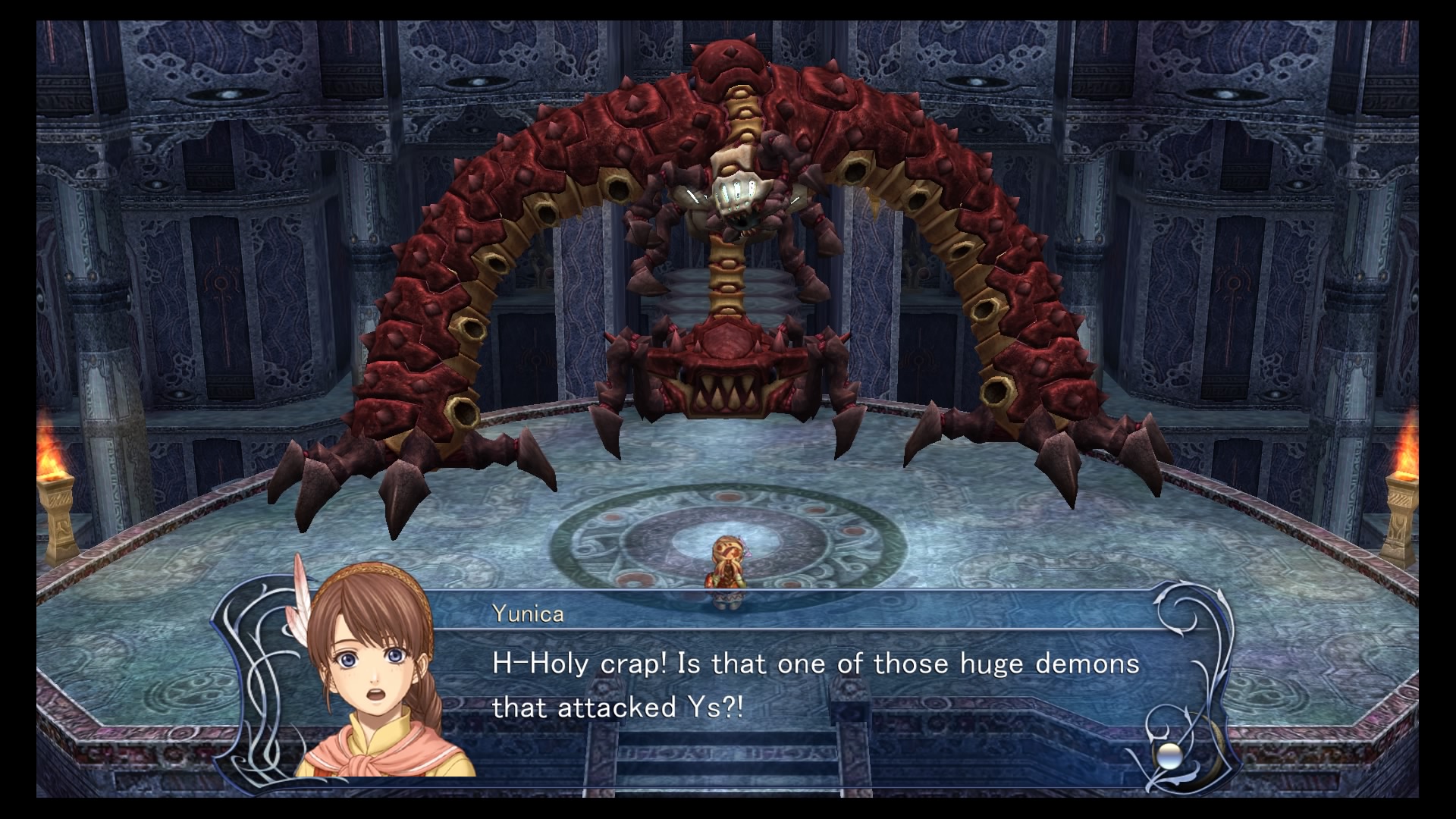 Both travel through the same tower but encounter different story beats and certain bosses. The path is pretty linear with only some optional power ups hidden slightly off the main route. Although there is a decent amount of story (told through text boxes) Ys Origin is primarily an action game, but with some RPG trappings.

You control whichever character in a fully 3D environment, viewed from a three-quarter perspective. The characters themselves are 2D sprites (apart from the bigger bosses) but they’re quite hi-res and sit well within the dungeons. It actually looks like it could be from earlier than 2006 but it’s pleasant to look at nonetheless. The music is also worth mentioning as it is excellent with each area having its own theme.

There’s some light platforming and puzzle solving but you will mostly be fighting enemies by mashing the square button. Using the magic you collect does bring some more tactical elements to the battles but there aren’t any impressive Bayonetta-style combos here.

As you progress you will collect new skills, almost like a Metroidvania, though you will only use these skills to move forward rather than go back to previous areas to unlock new paths. With it being in the news at the moment I’d say it’s closer to classic Zelda in that you gain the power you need to progress and then you continue on. Items allowing you to double jump and breath longer underwater are the types of things you can expect, as well as the magic I’ve already mentioned, items to increase you total HP, strengthen your weapon and new armours. 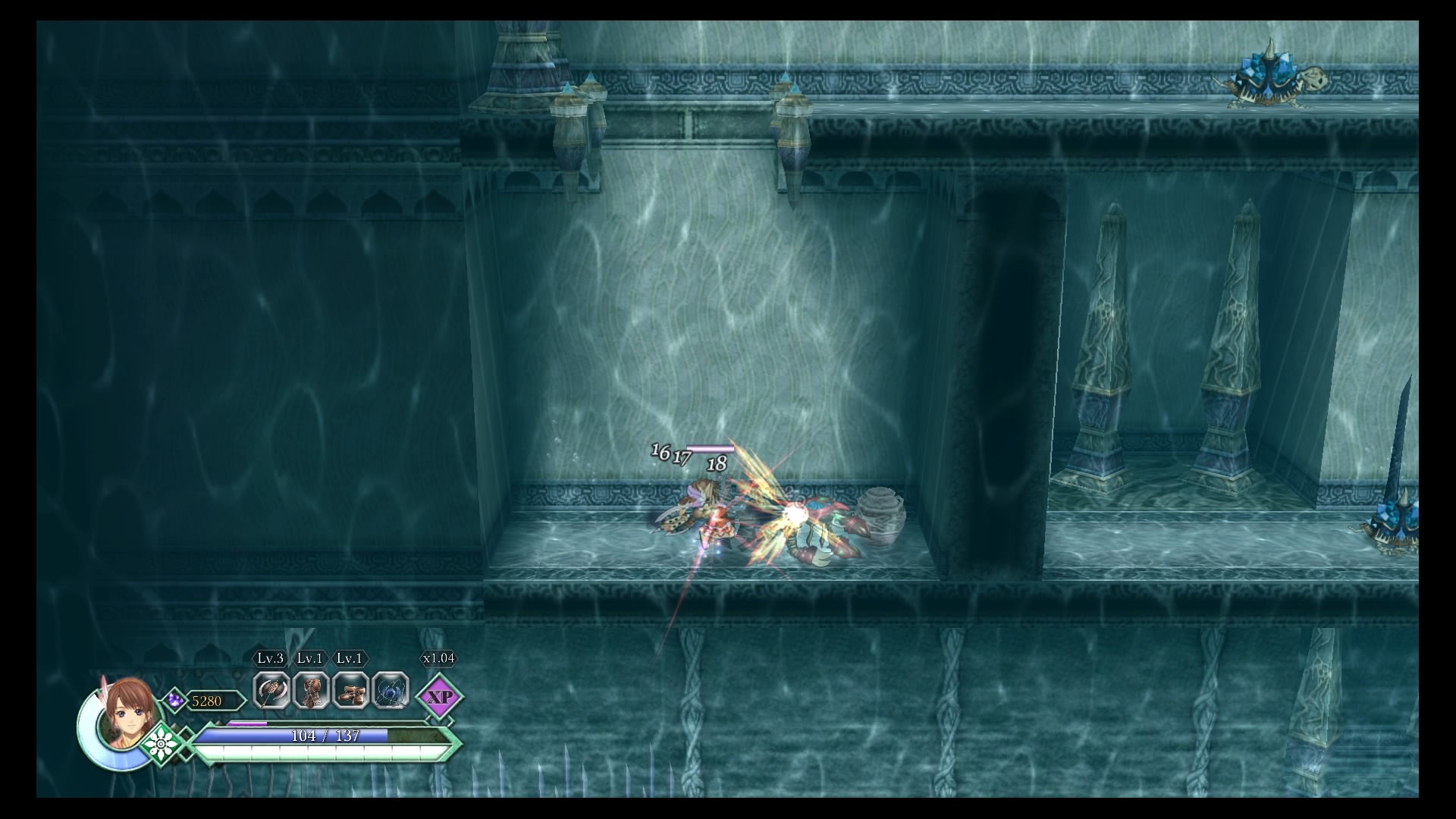 As you progress up the tower you’ll see a range of environments including your staple water level and fire level, but at least it’s varied. Each section is capped by a boss which is a classic, old school feeling boss. You need to learn their attack patterns and quite often just survive until you see an opening and then chip away at their health bar. They can be quite challenging until you figure it out and then it’s all about the execution which I appreciate a lot. Usually if you die you go back to your last save point but the bosses checkpoint at the beginning which is a nice touch. I did have some trouble where after hitting retry the game failed to load and I had to quit out though unfortunately.

You’re probably looking at eight to ten hours for each campaign, and a third character unlocks after beating the game with the two defaults. On top of that are extra modes and unlocks as you complete the game with the third character and on higher difficulties. That’s a lot of game for your money, though as different as they play you are seeing the same locations again and again. 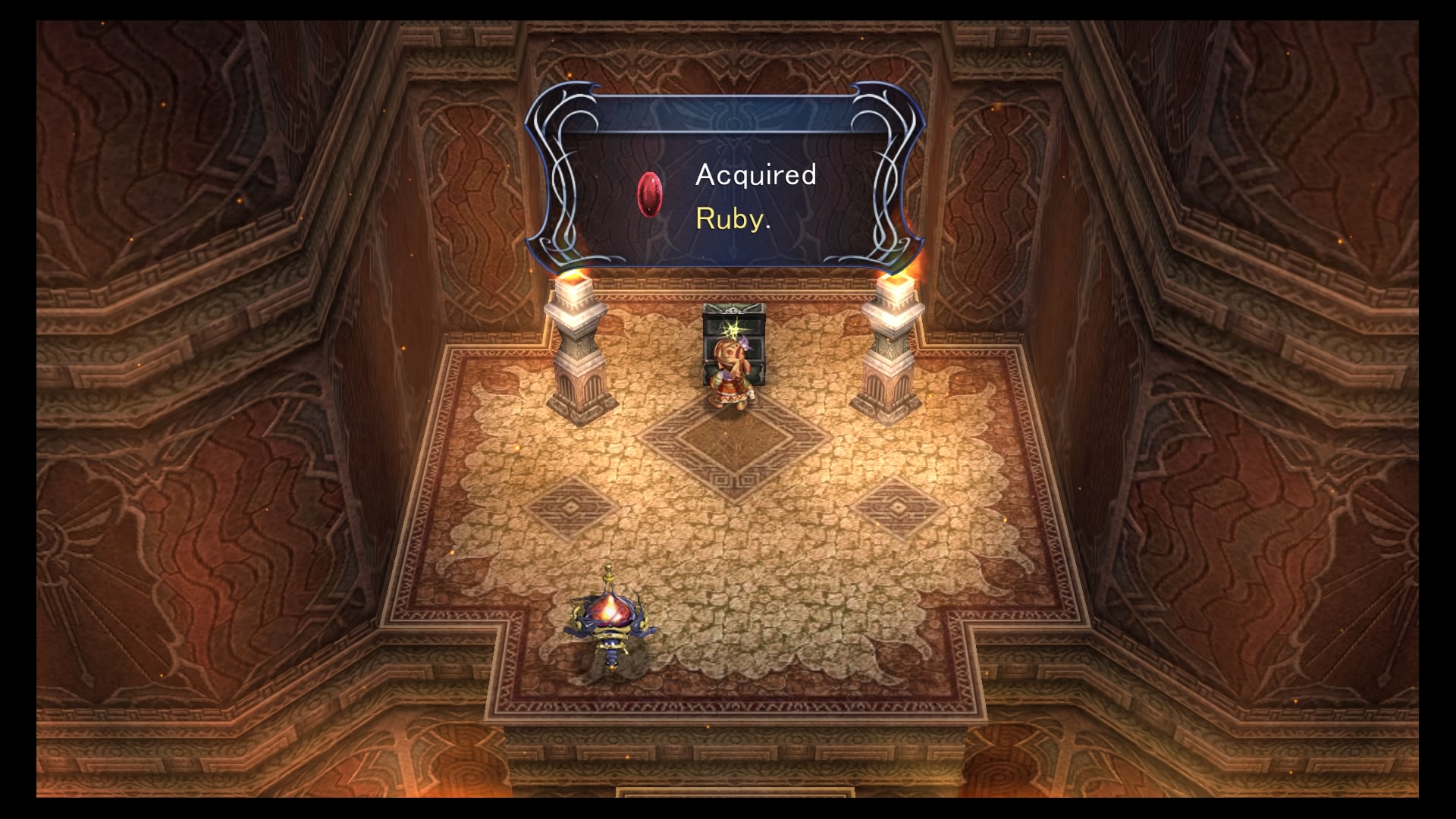 Whether you complete it once and never go back or try to do everything on offer Ys Origin is just a good game. It plays well, moves quickly, and switches things up enough to keep it interesting. The amount of content is very generous though maybe not as varied as it could have been and the boss battles remind me of how they should be done. If you fancy an action game with light adventure elements then you’ll struggle to find better than this.

Ys Origin
8 Overall
Pros
+ Enjoyable, fast moving gameplay
+ Great old school bosses
+ So much content
Cons
- Character playthroughs are very similar
- Did lock up on me a few times
Summary
Ys Origin may be over a decade old by this point but the quality shines through. It plays very well, moves at a fair pace and there's enough content to keep you busy for a long time.