As a self-styled hardcore platformer BLACKHOLE: Complete Edition is a repackaging, for the PlayStation 4, of the original 2015 PC release with all the subsequent DLC included.  Although warmly received on the PC, the PlayStation 4 is a different market and things have moved on since 2015, does a two year old PC game still hold up now. 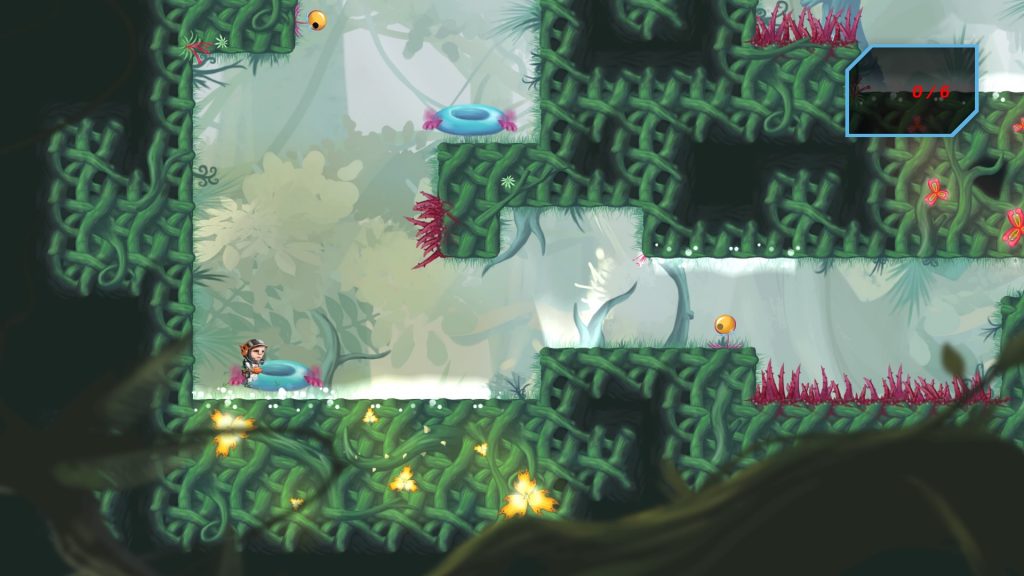 The big thing that makes BLACKHOLE stand out is the detailed story as there are pages and pages of it. This is delivered through a fully voiced cast with bags of humour thrown in, unfortunately most of the jokes missed the mark and the story felt cumbersome for this reason. The initial opening story credits go on for around ten minutes as well which rubbed me up the wrong way from the start.  From the screenshots and trailers I was expecting a platform game but instead I was forced to listen to too much story with too many unfunny jokes.  This isn’t to say the story is bad just that it gets in the way of the actual gameplay stopping you from progressing while it plays out. Luckily there is an option to reduce the amount of story to only the essentials, but even this feels like a lot and still interrupts the flow of the game.

Although BLACKHOLE sells itself as a platformer it also has an awful lot in common with a puzzle game. Things play-out as a 2D platformer but the there is a huge emphasis on navigation and puzzle solving in order to get all the collectibles on each level. It also isn’t a hardcore platformer in the same style as say a Super Meatboy where everything is out to kill you and you need lightning fast reflexes. BLACKHOLE still requires pixel perfect jumps although it is just feels a little bit slower paced and more deliberate as you puzzle your way through the levels. Make no mistake though this is a very difficult game, with instant deaths coming thick and fast and a big emphasis on respawning and retrying. 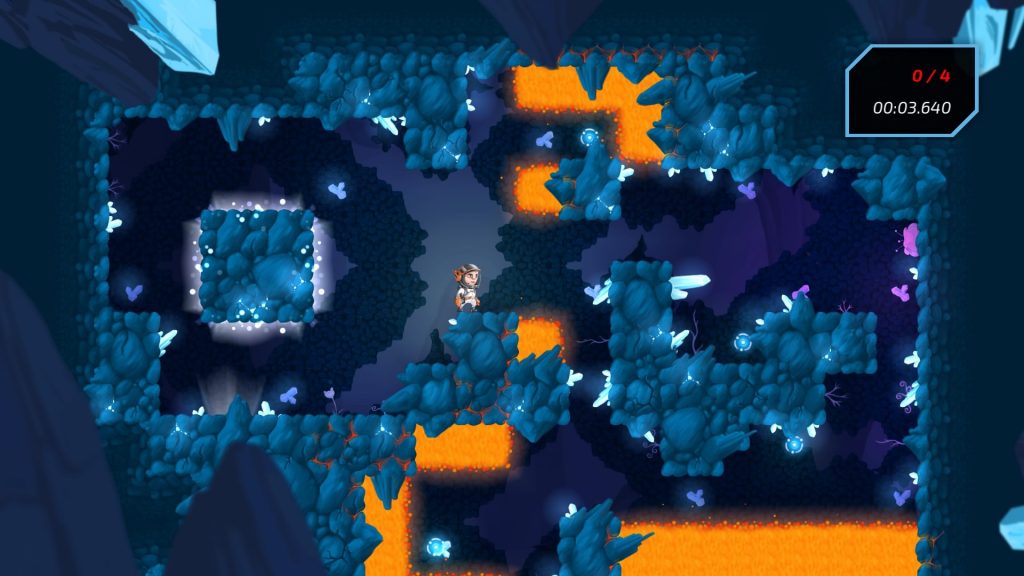 Each level is a discreet room with the goal of picking up little coloured orbs and getting back to the exit. Each level is presented over a smallish area with the screen scrolling perhaps a full length to encompass it all, so they aren’t all that big. There are usually around four or so orbs on a level and whilst you only need one to  complete the level the game does an odd thing of gating progress on the over world every now and again by requiring more than the minimum of one orb per level.  The end result of this is that you are required to go back and play earlier levels to collect more orbs. This feels like a poor way of giving the game more longevity.

The main mechanic behind all of the puzzles here is the ability to shift the direction of gravity.  Within every level are glowing white gravity pads and when you touch one of these the orientation of the room shifts to make that pad the ground, it’s a neat graphical feature which shows the room rotate.  Effectively then if there is a pad on the roof and you jump up to touch it with your head the world will shift to move the ceiling to the floor. This gravity shifting is used to great effect to produce some truly mind bending puzzles.

It can feel almost impossible to collect all the orbs in a single level and the need for some pixel perfect jumps really makes this game a challenging experience particularly when if you die as you lose all your orbs and have to start from the beginning of the level again.  This isn’t helped by the fact you can never see the whole level in one screen, there is no map when in a level and often the jumps you make feel like leaps of faith where you aren’t totally sure what is below you. 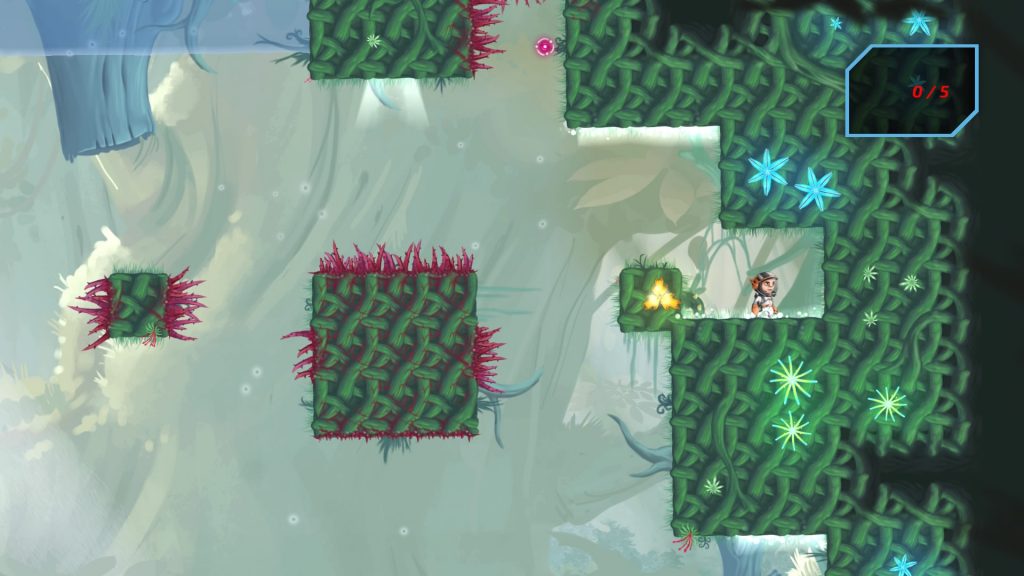 The gravity shifting is carried forward into the overworld and in order to progress from level to level you’ll first need to find the next entry point.  Sometimes needing to shift gravity in order to progress.  In theory this is a good idea but it does make traversing the overworld more complex than it needs to be.  Combine this with a lot of  backtracking and some samey backgrounds and getting lost becomes very easy.

Graphically things don’t particularly impress, it is solid enough, but the art style seemed to lack any real identity, although the main characters did remind me of the thing Vic and Bob used to do when they pretended to be Otis Redding and Marvin Gaye, which is always a good thing.  BLACKHOLE also has some odd idiosyncrasies such as using the square button to confirm selections on the menu screens and a weird need to load every time you open the overworld map up. I also experienced the odd occasion of slowdown which was frustrating given that it doesn’t look like it was pushing the PS4 much. 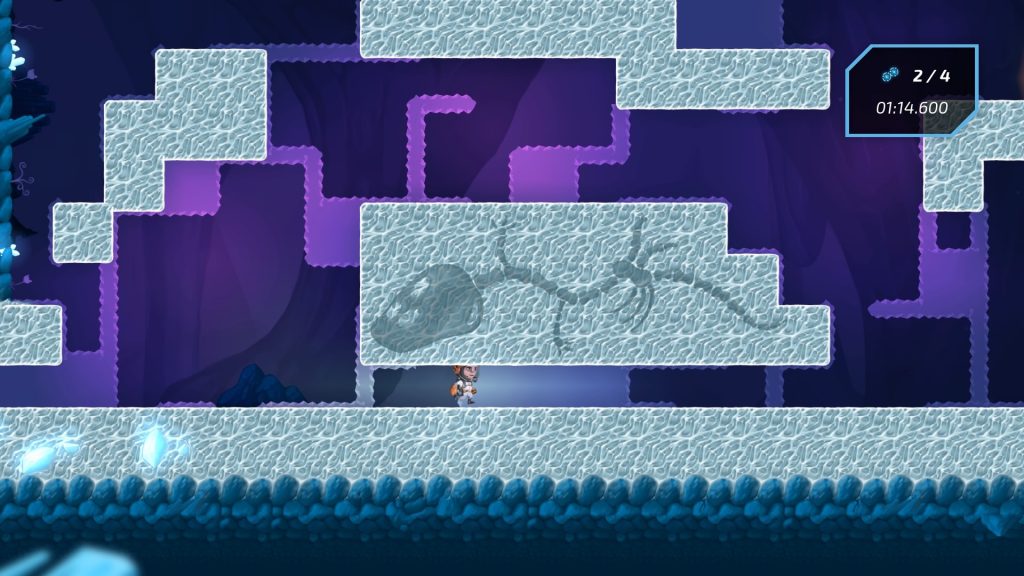 As an overall package BLACKHOLE: Complete Edition is a very generous offering and packs in hours of gameplay for a reasonable price. It also lives up to the moniker of hardcore platforming as it is difficult and will put a lot of people off. It is unfortunate though that the game gets bogged down in story which consistently breaks the flow and isn’t as funny as it thinks it is. There is fun to be had here but not that much.

BLACKHOLE: Complete Edition
6 Overall
Pros
+ A fair amount of content
+ Some proper head scratching puzzles
+ Lots of story
Cons
- The story gets in the way of the gameplay
- It isn't as funny as it thinks it is
- It is very difficult
Summary
BLACKHOLE: Complete Edition is a very generous offering and packs in hours of gameplay for a reasonable price. It also lives up to the moniker of hardcore platforming as it is difficult and will put a lot of people off. It is unfortunate though that the game gets bogged down in story which consistently breaks the flow and isn’t as funny as it thinks it is. There is fun to be had here but not that much.