I know the market’s full of them but I haven’t played a Metroidvania in a while. When they’re good, the deliver a flowing experience that I’ll always enjoy. Exploration always appeals to me and uncovering new secrets across an expansive map. Unspeakable Pixels released Batbarian: Testament of the Primordials last year on PC. It’s now available for the Playstation 4 and the puzzle-platformer is certainly one for more patient people. 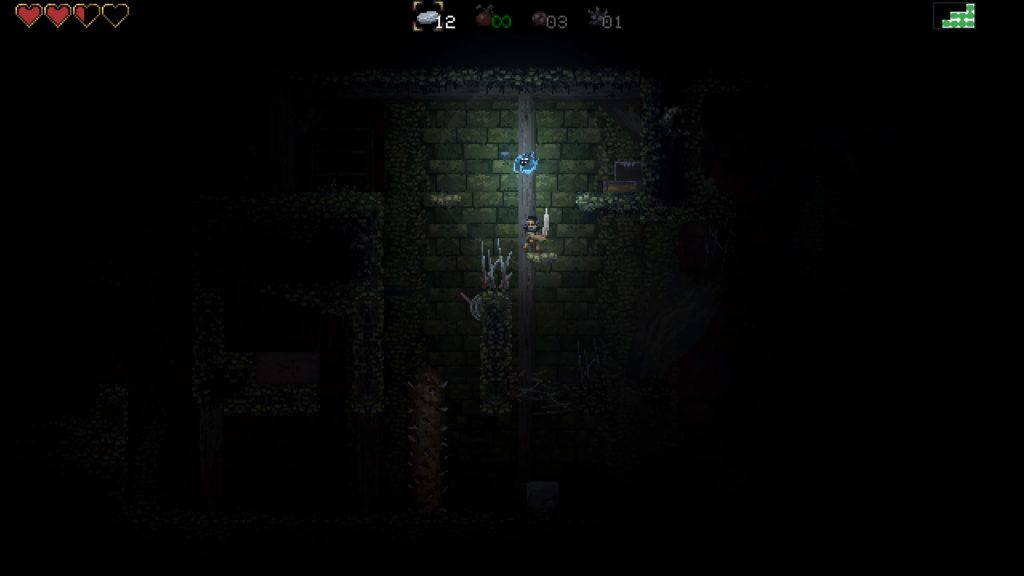 The story is a simple enough tale. As a Barbarian, you’re flung into a dark abyss of monsters, traps and suspicious characters. Escaping is the first thing on your mind but you’re not alone. Pip, a luminous bat is here for company. You and your pet will have to cooperate to make it out alive in a narrative that doesn’t provide much in the way of twists but does deliver on humour.

There’s a lengthy script touted here but I often grimace at some attempts at funny writing. Thankfully, Batbarian: Testament of the Primordials does manage to pitch this well. You can dictate how conversations go and I do find the laughs are gentle and don’t try too hard to force it home. It’s tonally appropriate and I do appreciate that.

This has a nicely detailed look to it. The pixelated art is well animated and each biome has a fresh character to it. Enemies are greatly varied and have distinctive looks. It helps being able to recognise them at a glance to determine what tactics are required to take them down. Platforms are distinguished to allow you to see them clearly and a lot of care has been taken to present the action well. 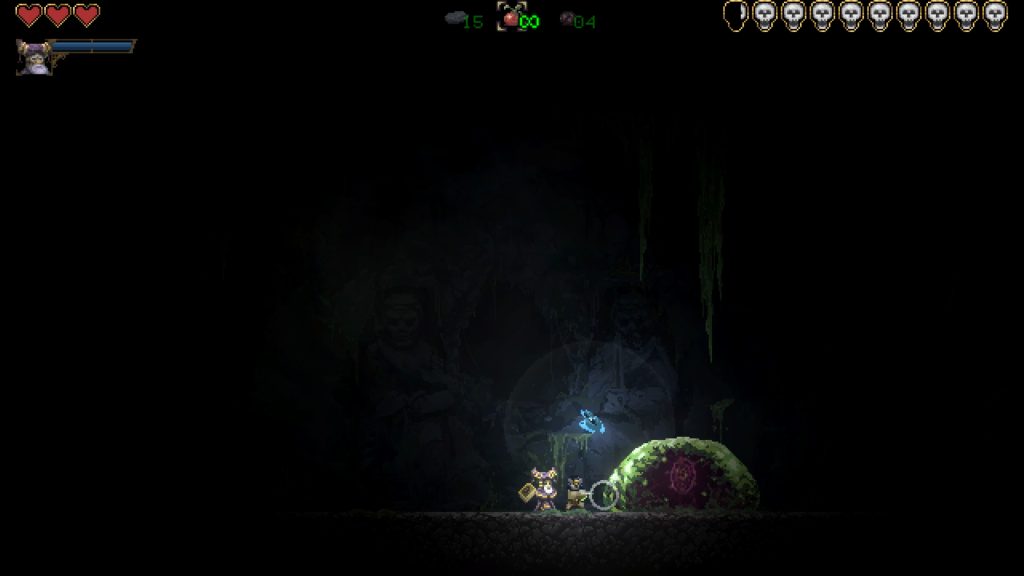 Darkness plays a role with Pip’s radiance often being your main source of light. There are torches along the way but the bat’s glow becomes essential for reading the surroundings. It’s accompanied by a stellar soundtrack that evokes Castlevania with harpsichord and organ tones. It can get bothersome if you’re spending long in a single area but, taken in isolation, the tracks work really well.

Where Batbarian: Testament of the Primordials deviates from the standard formula is in how much puzzle platforming is involved. There’s a lot of secrets to uncover and obtaining them requires dexterity that I’m not sure the controls are up to. Movement and jumping is relatively responsive but there are plenty of rooms that feel like obstacle courses. Stringing together jumps and solving switch puzzles is fine but it’s laid on thick.

There’s a big map to uncover and the reliance on puzzle-solving does slow things down. Progression is tackled in a couple of ways. Through exploration, you can find potions that permanently increase your three core attributes. Vanquishing bosses add hearts to your life bar. Killing enemies always grants you experience and you gain levels. It’s a slow roll-out but it does allow players to gain in power without pursuing all the chests. Unfortunately, it does further hamper the game’s momentum. 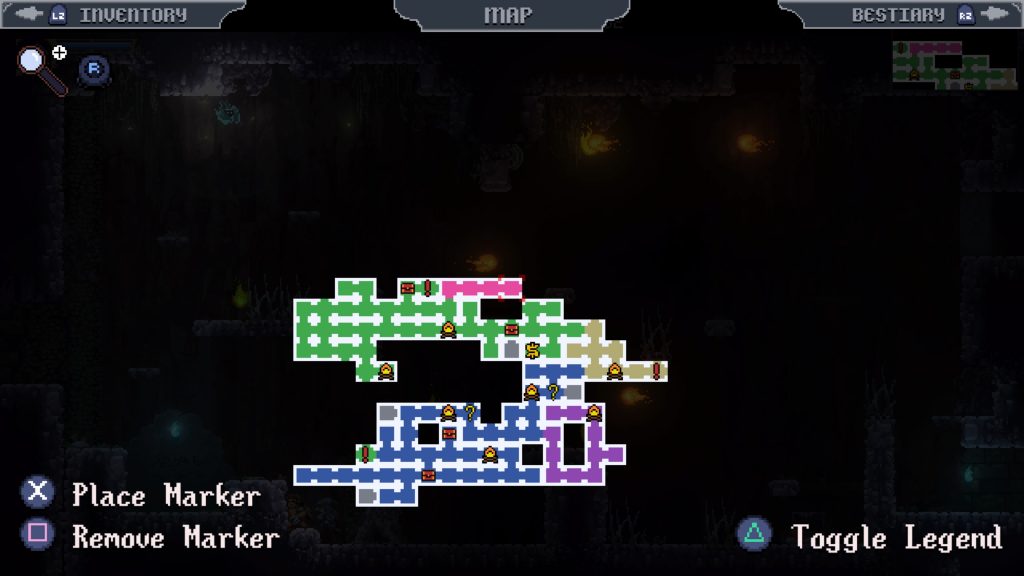 Whilst you can become more resilient and damaging, your movement options don’t tend to change. Pip gains some new, elemental tricks but you’re relying on tight jumps and execution. I did start to find it exhausting and, whilst there are assists on offer, none of them circumvent the tougher platforming challenges.

Combat is fairly simple. You have a basic strike that you later earn the ability to charge. This mostly is used for opening new passages but can be used in combat for heavier hits. Like the traversal, Pip ultimately becomes your greatest ally in fights. Some enemies can’t be tackled with your usual attacks so your bat has to act as an assistant. You pick up fruits through your travels which Pip will naturally chase after. This allows you to tackle problems from afar and get some hits in. There’s also a few accomplices you can hire to assist in combat.

These are introduced relatively early and, like your ability to platform, it doesn’t really progress much further. The combat ramps up in terms of encounter complexity but your toolset doesn’t expand with it. It’s a shame because, much like the traversal, I’ve found myself in situations where I can’t really grind my way to victory. The enemies aren’t difficult but there are scenarios where you are locked into arenas to fight multiple foes. This is arguably where the assists come in most handy. They don’t really cater towards movement but do help you resist more damage and handle yourself more effectively. 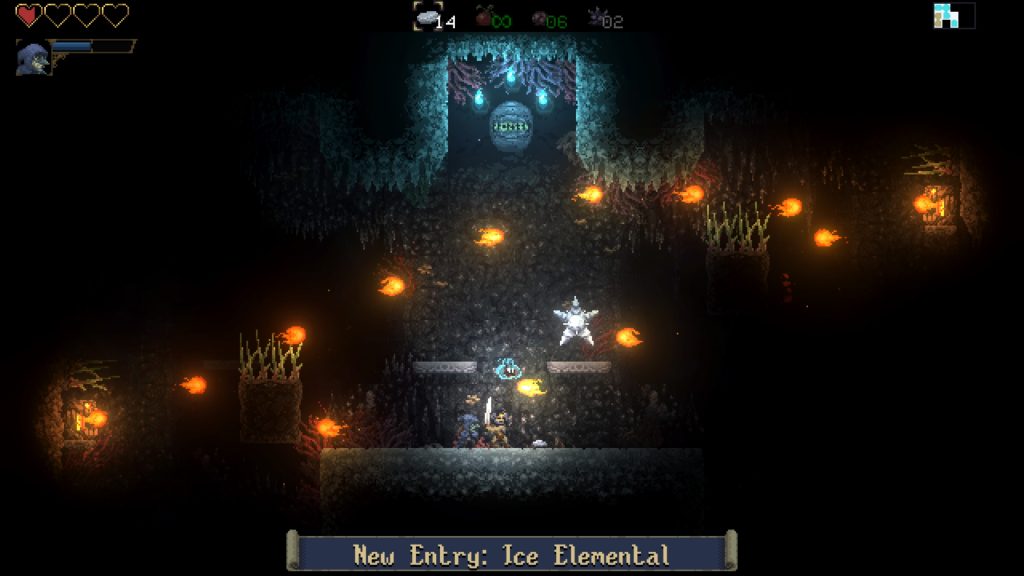 As a complete package, it doesn’t come together for me. I find the heavy focus on puzzle-solving to really slow me down. On a smaller map, this would’ve been more palatable. As it is, I found it a bit of a trudge to play. Combat was a lot easier to get to grips with but I didn’t feel greatly incentivised to chase secrets and upgrades. I still had to do the tight and tricky stuff which is a frustrating obstacle to get over.

It’s a real shame because the presentation works so very well. The humour lands, the art is intricate and lively and the soundtrack is very evocative of the obvious influences. I just wish playing it flowed much better. Some people will enjoy diving deep into a map full of secrets. For me, I need to have fun moving through it. I want to feel I’m becoming more powerful and, whilst you gain more options as you progress, they don’t negate the more cumbersome elements.

Batbarian: Testament of the Primordials
6 Overall
Pros
+ Has a really intricate and charming look to it.
+ A great evocative soundtrack.
+ A large map with plenty of secrets.
+ Smartly written with a light-hearted tone.
Cons
- The heavy emphasis on puzzle solving does slow the game down.
- Some of the platforming requires a precision that the movement can't always deliver.
- The assists are welcome but they all seem geared towards resilience rather than mobility.
- Combat is simple and rarely where the challenge lies.
Summary
Batbarian: Testament of the Primordials wears its influences proudly and, at times, it pays an effective homage whilst building a blueprint of its own. The visuals look deliciously detailed and animated with plenty of life. It's accompanied with a wonderful soundtrack but I just don't quite enjoy playing it. There some clever puzzle-platforming involved but the large map is packed with screens of tricky jumps. It leads to a game lacking in momentum and frustrates me. It'll appeal to those wanting more of a challenge but it's not clicking for me.