Fallen Knight is a sword-slashing, platform-jumping action game from Bangkok-based coders Fairplay Studios and it sees you playing as Lancelot and Galahad, two of the famous Knights of the Roundtable.  The story has been updated a little though, putting it all in the future.  In this future most of humanity’s worries have been solved thanks to the discovery of the Holy Grail, which now offers a source of clean energy.  However, even in an idyllic future, you’ve still got assholes looking to spoil it for everyone.

In this case, they are The Purge, a terrorist organisation who want to steal the grail and use it for their less noble plans.  So it is up to Lancelot (and in the alternate mode, Galahad) to take a stand and protect the grail from the evil clutches of the bad guys. 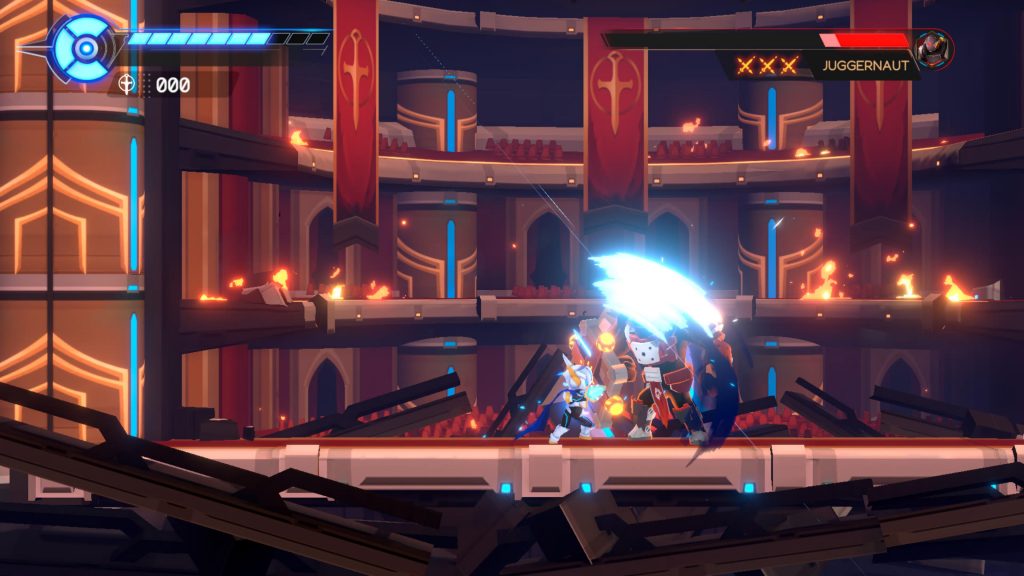 A brief tutorial explains the controls and it is worth paying attention when it does.  Your knight uses a sword to attack but also has a jumps, double jumps, wall runs, wall jumps and a dash move.  So getting around isn’t a problem.  However, if you want to do well, you’ll also need to master the parry.  To parry, you just have to use your sword at the right time as an enemy is attacking.  This will render them helpless and will allow you to dispatch them harmlessly and ‘with honour.’

Doing that will earn you bonus points which can then be spent between levels on new abilities and character upgrades.  So, there’s quite a bit to digest there but it’s not too much and for the most part the game is pretty intuitive.  New moves get introduced to you as you complete missions also.  From the ability to parry ranged attacks to new air and ground moves that will give you even more ways to defeat foes.  It’s nothing new but it plays much like any 2D hack and slasher but with a dash of Strider thrown in for a bit more flair. 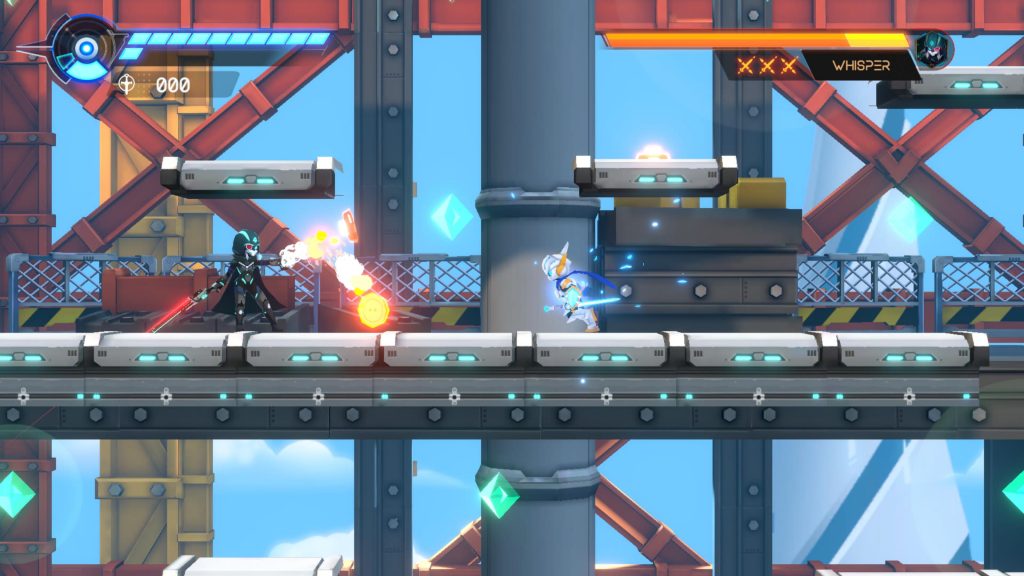 Lancelot’s campaign is set over six levels.  These take place in various locations but essentially all play out the same.  You head towards the right hand side of the map, taking out mostly the same enemy types each time.  You can usually go up or down a bit, but it’s still pretty linear.  This is no metroidvania and that’s not a bad thing as we don’t always appreciate a sprawling map.  Along the way you’ll find enemies that shoot at you, shielded ones who fire missiles, sword guys, annoying drill guys and the occasional helicopter to deal with it.  It’s standard stuff though with nothing particularly original in there.

Eventually you’ll come to a boss battle and these are a bit more challenging but again, it’s standard boss fight gameplay.  They’ll hit you, jump around, shoot you, do big area-of-effect attacks and are generally a bit of a pain.  Most are easy enough to beat though although one sniper boss got on our last nerve and the game’s final boss is a prick too.  He gets to full replenish his health once you beat him which is something that we’ve always hated in a boss battle.  His attacks are pretty cheap too, especially in the second half of the battle so it did leave us with a sour taste after playing. 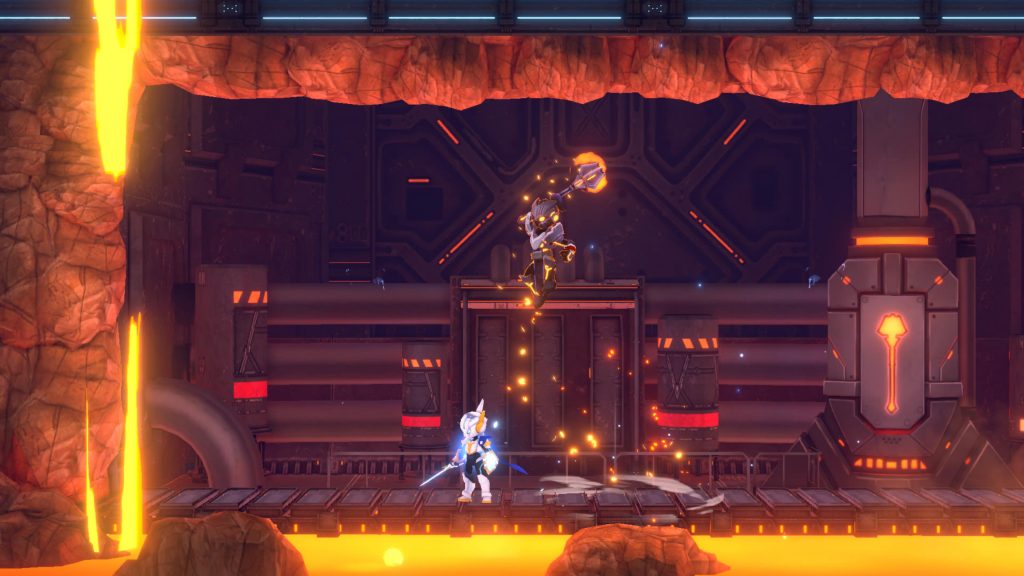 The game’s biggest issue however is that the controls are just a bit off.  They are easy enough to understand but you want, and indeed need, the crispness of a Housemarque shooter but here everything is kind of sluggish.  A little inertia is just enough to make Lancelot feel a little imprecise when he runs, the wall jump/run mechanics are awful with you feeling all too sticky especially when you’re in a boss arena and the timing on the parry mechanic is frustrating at times too.  The game tells you, in the briefest of still images, that you can, and should, parry boss attacks but doing this is unbelievably tricky and inconsistent.  Indeed, the only consistent thing is that it’ll likely get you killed.

The campaign is a bit odd in that you can go to any level you want and it’s actually a little bit confusing trying to figure out where you are meant to go next.  The menu is a little bit clumsy in that respect.  It doesn’t do you many favours when it comes to figuring out how upgrades work either but you’ll eventually figure that out and, in the end, what you get is relatively short and harmless two hour campaign.  The closest thing to it is probably Housemarque’s Matterfall, which is their worst game but is still considerably better than Fallen Knight in terms of its responsiveness and general gameplay. 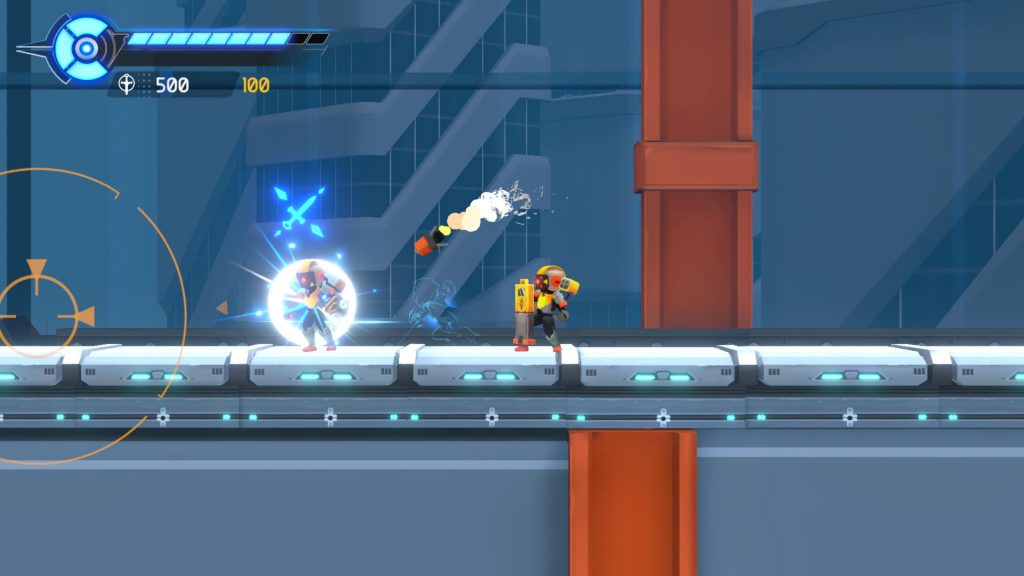 One thing that Fallen Knight has got going for it is Galahad’s campaign.  After playing as Lancelot, you’d expect it to be more of the same but actually his mode is a full on rogue-lite where you start from his version of level one and only have one life with no restarts.  You start each run with temporary powers but you can add permanent ones.  Galahad lacks Lancelot’s handy (and basically essential) healing mode and instead has to rely on parrying to gain health back and it’s a nice bit of variation.  That said, it is absolutely rock hard and the level of challenge may put many players off, especially the boss battles which don’t allow for much parrying and therefore no healing.

Another bright spot is the game’s presentation.  It’s nothing special but the 2.5D look is preferable to the usual glut of pixel art hack and slashers we get, so they get bonus points there even if the settings and enemies are all pretty generic.  It looks nice enough though and the game’s soundtrack is pretty good too, sounding like a beefed up Bond theme.  There’s clearly been some love put into the game and that comes across in its general level of polish.

There’s a decent enough game here but it’s not going to wow gamers and it’s not got the gameplay dialed in enough for it to be some sort of skill-heavy badge of honour for hardcore gamers.  Much of its difficulty comes from the deficiencies in its controls, including a lack of invincibility frames when you get hit which can make encounters with multiple enemies a nightmare if you’re trying to time your parries.  But it’s an okay game overall and one that is just about worth checking out if you fancy a bit of hacky slashy fun.

Fallen Knight
6 Overall
Pros
+ Well presented
+ The secondary rogue-lite mode is a clever addition
+ Reasonably good gameplay
Cons
- Sluggish controls let it down
- No real originality
- Some boss battles are a bit cheap
- Upgrade system is awkward
Summary
Fallen Knight offers up some reasonably polished hack and slash action but would benefit from much tighter controls. While we appreciated the clever addition of a rogue-lite second campaign, the overall experience is just a bit too sluggish and frustrating for us to recommend the game but there is still some enjoyment to be had from it.