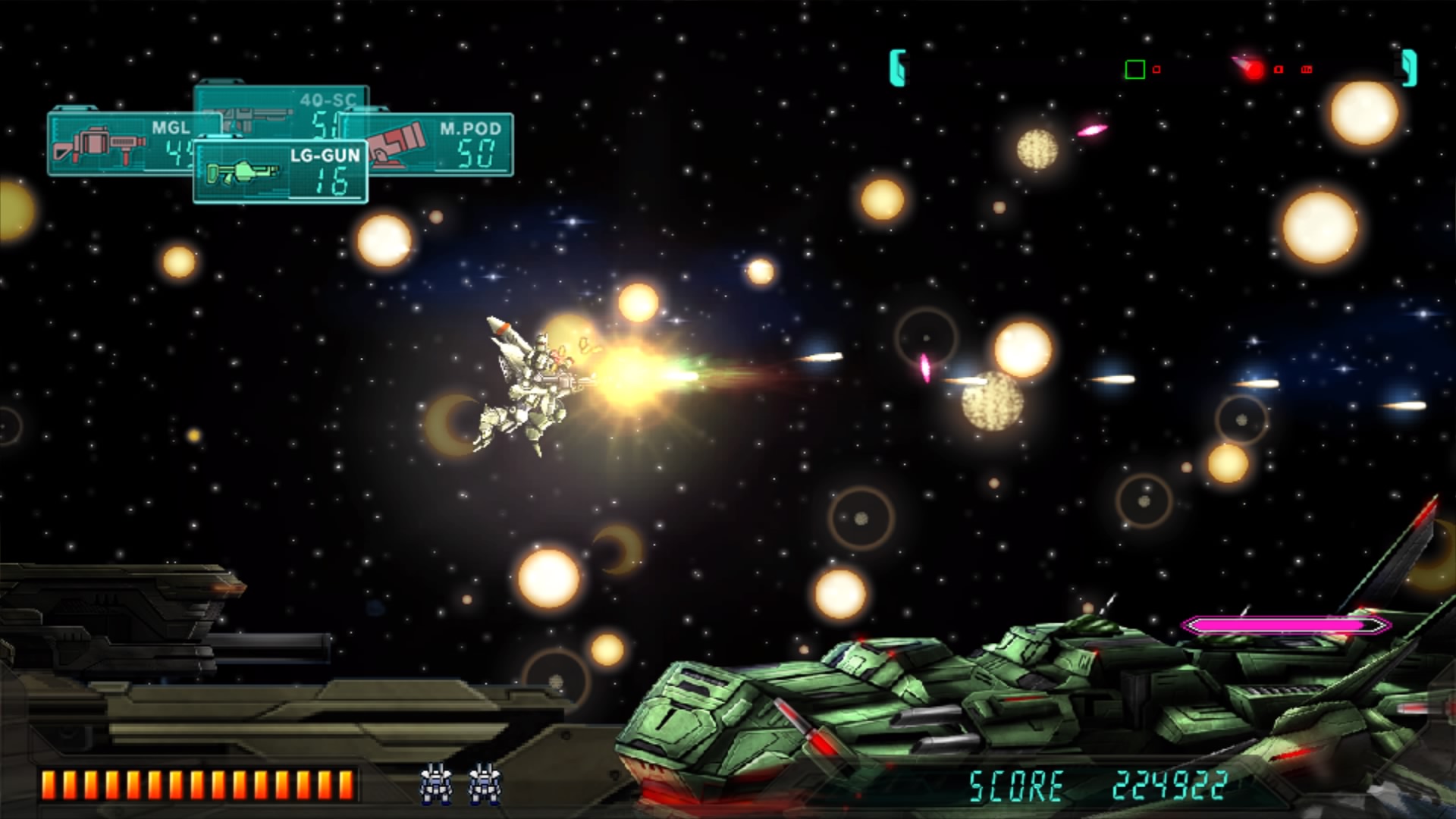 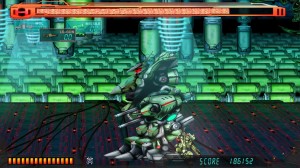 Bringing out a port of an obscure Sega Genesis shoot ’em up is a fairly leftfield move but this reimagining of the 16-bit Assault Suit Leynos series (and specifically the first one ‘Target Earth‘) is out and brings with it updated levels, visuals and weapons. Leynos links in best with the run and gun genre (you know, your Contras and Metal Slugs) but with difference, you’re in a small but stompy mech so there will be absolutely no running. After getting suited up, it’s up to you protect the Earth from some sort of invading force (I won’t spoil it and there’s plenty of conversation in the game that explains who they are).

For the most part, you’re walking from left to right into the enemy’s territory. You’re slow and heavily outnumbered but you have a gun, a shield and some armour. As you progress, you unlock more weapons and armour and can eventually configure them how you like into six slots. Do you use one slot for armour and the rest for weapons? It’s up to you. Either way, you’re pretty powerful. Aside from dishing out damage, you can take plenty. Your shields recharge quickly and you can survive multiple attacks before things go awry.

However, the enemy is tough. Aside from the dumb ones that run at you, you’ve got tanks and flying shit to deal with and that’s before you get to the bosses. The bullet patterns can even resort to pure bullet hell (not great when you’re basically encumbered heavily) so don’t expect an easy ride. 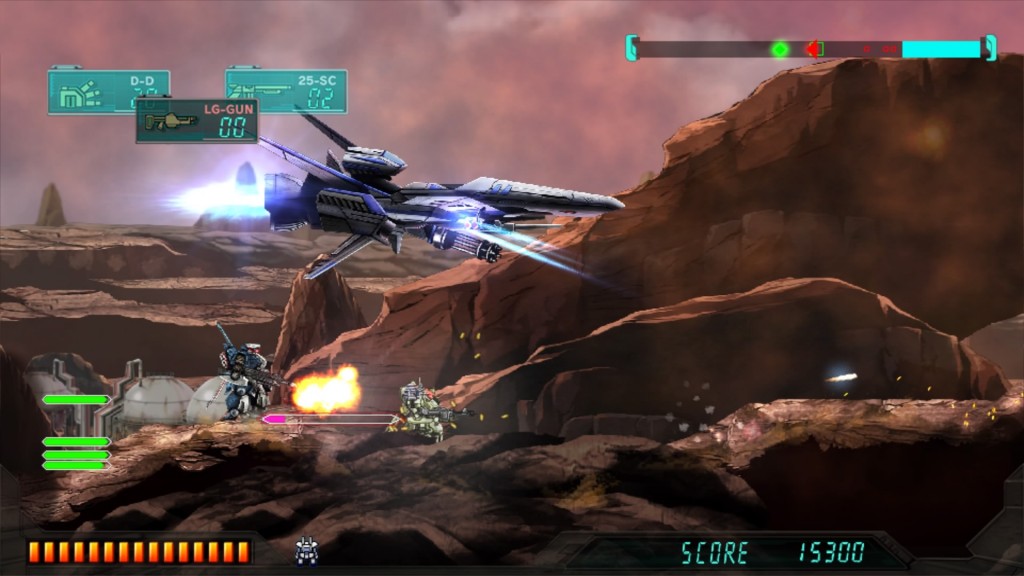 For a while there, I was really enjoying Leynos. It’s kind of rough – sporting, as it does, a sort of PS1 game in an emulator with all the options turned up kind of look – but the weapon unlocks kept it interesting, as did the occasional free-floating space battles. Throwing in variation into these games is always a good idea, and Leynos does try. Also, the slow pace of it makes it kind of enjoyable. Mixing up the levels with timed objectives and escort missions isn’t nearly as annoying as it sounds either.

The big problem for me was level eight. The final level. This one gives you a timed objective where you kind of have to blow all your best weapons out on it. Then you’ve got a series of boss battles. I eventually completed the level (and therefore the game) but it was a stunning pain in the arse, requiring heavy use of checkpoints to get through it. The final boss battle is a particular prick. It is doable but it’s far from what you might call fun. 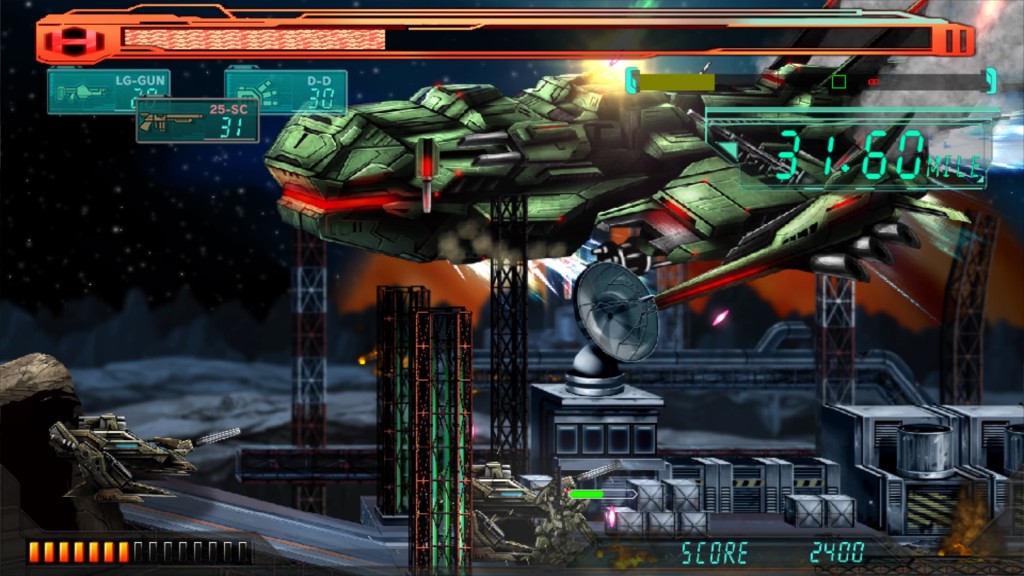 While the gameplay is solidly put together, it does seem a bit gimmicky at times. All the extra weapon config options seem like unnecessary icing to disguise a slightly bland cake. In an era where horizontally scrolling shooters and run and gunners were commonplace, you had to take risks and Target Earth did but sometimes the simplest games are the best ones. Contra didn’t need all this nonsense with leveling up your assault suit and not knowing the attributes of the guns does lead to lots of wasted runs. However, if you end up balls deep into this game, you might appreciate figuring it all out for yourself.

One thing I would have loved to see would have been some control setup choices. The game uses the left stick to move AND aim. There’s a whole second stick there that would be perfect for aiming and might have really improved the game but for some reason they’ve gone with the one stick set up. It makes no sense (apart from unwisely wanting to stick to gameplay that is 25 years old). 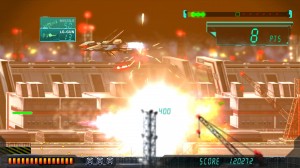 At £20, this is far too expensive for what you get but if you’re looking for a very retro experience, Assault Suit Leynos will give you that (especially if you choose to play the ‘Classic’ mode which removes the ability to use checkpoints). The trophies also get you thinking about how you approach the levels. If the game split level eight up (or just sacked off the final boss) and had a more traditional weapon system, I’d be looking at a solid 7 here and telling you to wait for a PSN sale. Now it’s coming with a score of 6 and a warning. This game may not be for you. As an old shoot ’em up fan, I can get into it even if it feels like a wasted opportunity sometimes. A bit of extra polish would be nice, especially for the price, and the gameplay could definitely have been refined too but in a genre that doesn’t get huge amounts of attention, this is a reasonably good example of an old-school shoot ’em up.

Assault Suit Leynos
6 Overall
Pros
+ Authentic, old-school run and gun action.
+ A good challenge.
+ Has some decent additions to the standard formula.
Cons
- I'm not a huge fan of the graphical style.
- Would be way better with twin-stick controls.
- Level eight is boss rush filth.
- Too expensive.
Summary
Assault Suit Leynos combines 16-bit gameplay with PS1 graphics and while the controls aren't particularly great and the last level is horrible, this still scratches that classic gaming itch. Wait for it to turn up in the sales before you bite though.
We use cookies on our website to give you the most relevant experience by remembering your preferences and repeat visits. By clicking “Accept”, you consent to the use of ALL the cookies.
Cookie settingsACCEPTREJECT
Manage consent