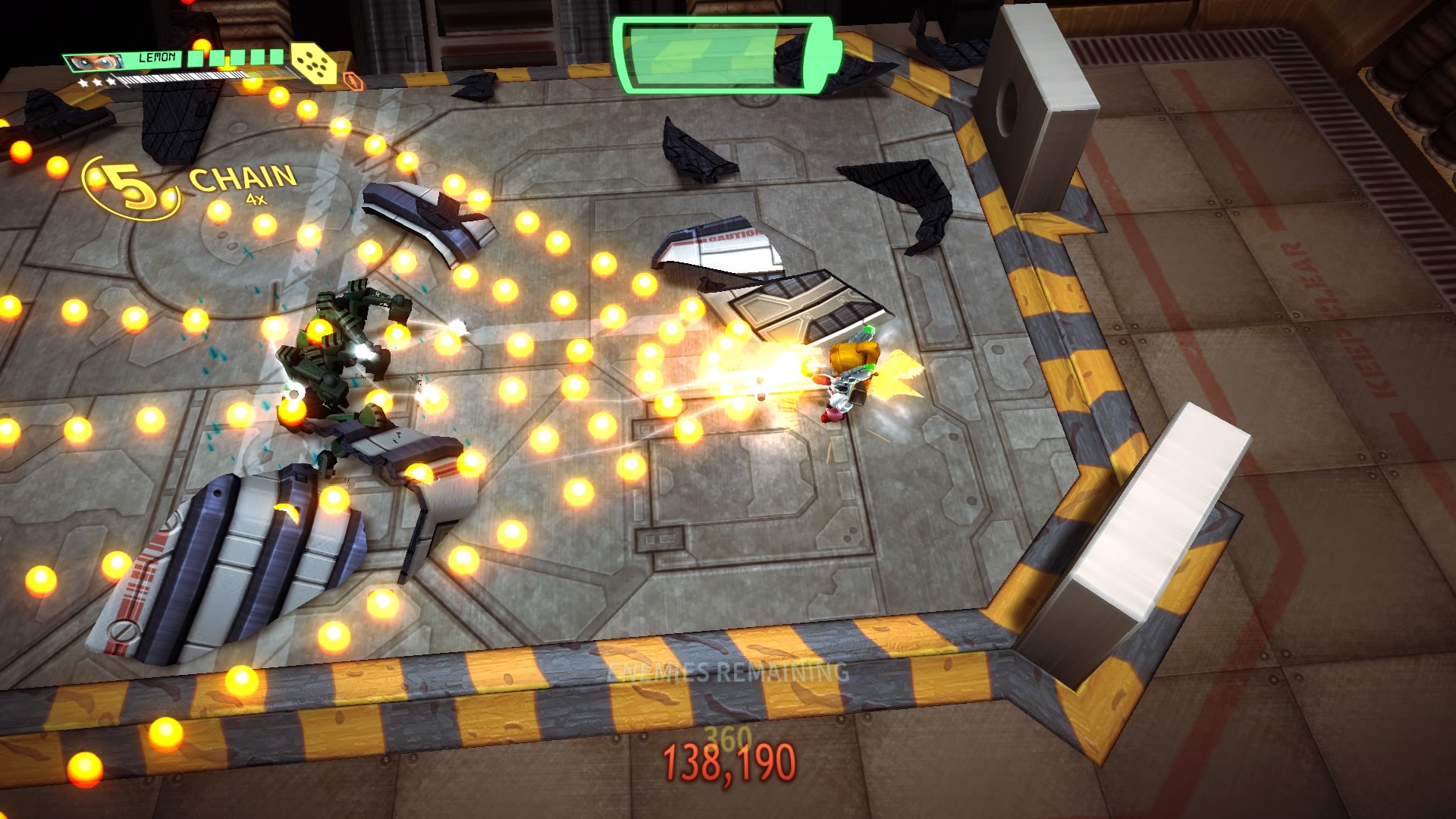 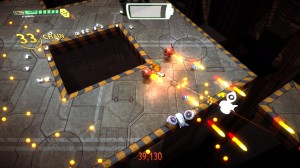 The PS4 isn’t a stranger to twin-stick shooters that have already done the rounds on Steam and here comes another.  Assault Android Cactus is a solid shoot ’em up in a not-too-serious shell that sees you playing as Cactus (an assault android, I guess) or one of three other droids that you rescue during the game’s tutorial.

What you get here is an arena based twin-stick shooter that doesn’t veer too far from the template.  Annoyingly, it uses a fire button but there are a few different play styles as each android has different weapons (one light, one heavy) and new droids are unlocked as you go along.  This is good, even if it can feel a bit ‘pick your compromise.’

After the initial cutscene where Cactus rescues the other droids, you are thrown into the action.  Each droid has two weapons, a primary and a slower, more powerful secondary.  You’ll soon pick your favourite droid and from then it’s a case of killing everything in each level in order to progress. 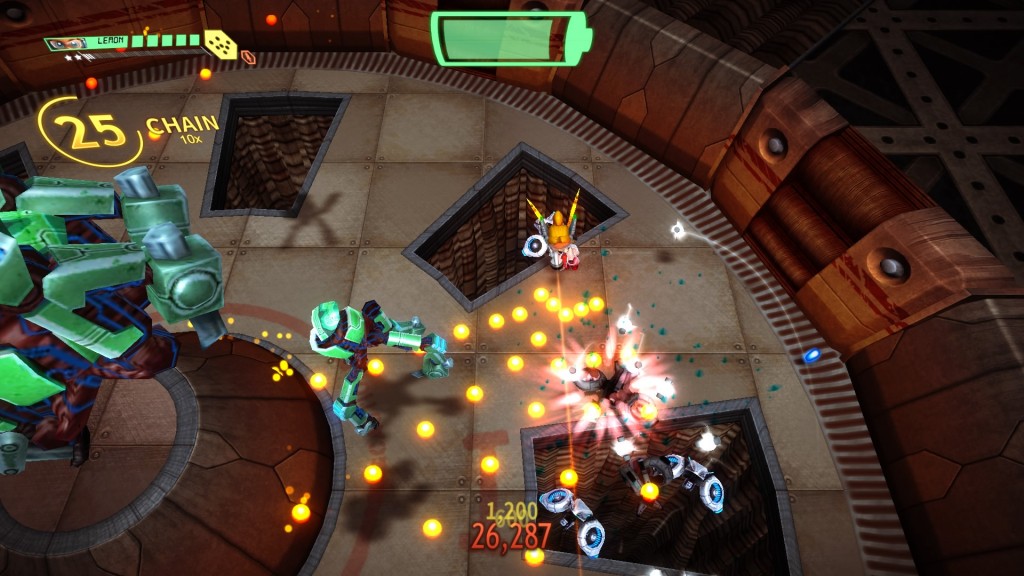 Instead of lives, you have a battery meter.  Taking damage uses up energy and battery charge pick-ups become available after destroying a certain number of enemies.  Although it’s a fairly different system, it does still come down to keep moving, keep destroying things.

The early levels themselves are quite enjoyable.  Each arena is slightly different with various obstacles and even moving floors to contend with and there are even some scrolling levels thrown in occasionally too.  They are packed with enemies to destroy and it’s actually pretty satisfying because you do feel pretty powerful.

Occasionally apart from dropping battery powerups, enemies drop other ones that switch between three states offering upgraded firepower, enemy freezing or increased movement speed.  These can turn a battle in your favour temporarily which is pretty important as the levels can get pretty difficult. 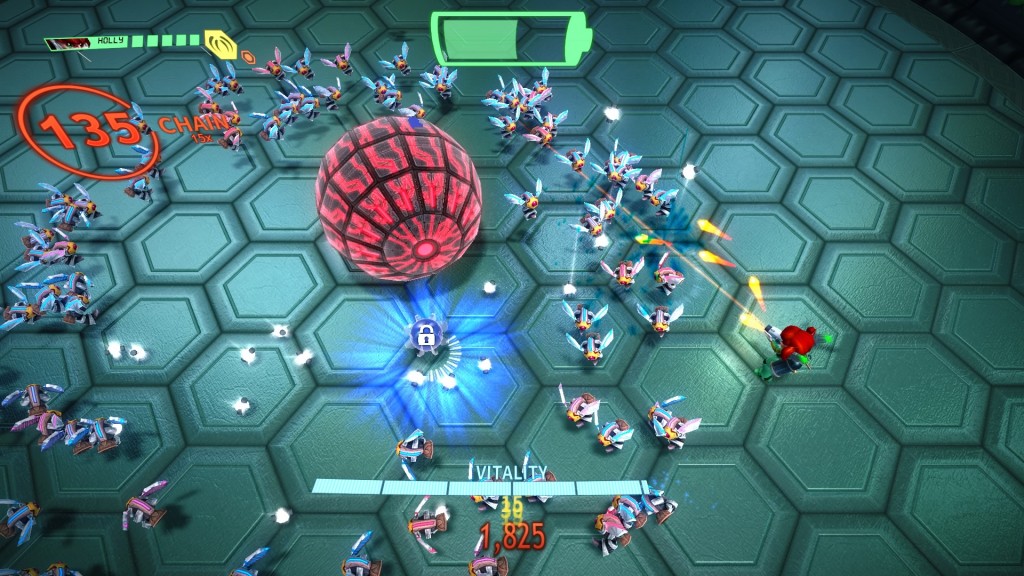 However, it’s not just a case of surviving.  Assault Android Cactus markets itself as a score attack game and to get the best rating you need to keep a combo going.  You have two seconds after your last kill before your combo dies on you and the elusive S+ ranks require comboing the entire stage.  Easier said than done.

This is all good so far.  It’s not up there with the best twin-stick shooters but it’s above average for sure.  The downside comes in the form of the game’s bosses.  These are devastatingly tough and a little joyless.  They get in the way of the score-chasing fun and are a tad unnecessary. 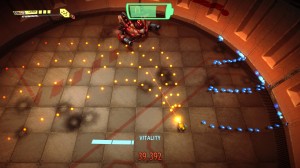 Another weak point for the game is the presentation.  The clunky 3D polygons just don’t look all that good and the silliness of the characters are at odds with the tough nature of the gameplay.  One droid that you unlock later on (there are few extra ones beyond the initial four) says ‘PINEAPPLE!’ loudly through your Dual Shock speaker when you select it.  I’m not ten and a ten year would get their ass handed to them by the game, so pick your audience.

Overall, Assault Android Cactus is quite good.  It has received some stellar reviews over on other sites but it’s hard to see why.  The game is standard indie fare and in a world where Geometry Wars 3 exists, any other twin-stick shooter needs to really up its game if it is going to warrant sort of praise.  If your game is aimed at a hardcore audience, it really needs to be one of the best examples.  But that’s not to say this isn’t good.  It could just be a bit better.

Assault Android Cactus
7 Overall
Pros
+ Satisfying action + Score chasing fun + Decent variation in weapons
Cons
- Boss battles kill the momentum - A tad too hardcore at times - Presentation is average and doesn't suit the gameplay
Summary
A solid and competent twin stick shooter than is hampered by being just a bit boring at times and a tad too difficult at others. It's good but never remarkable.