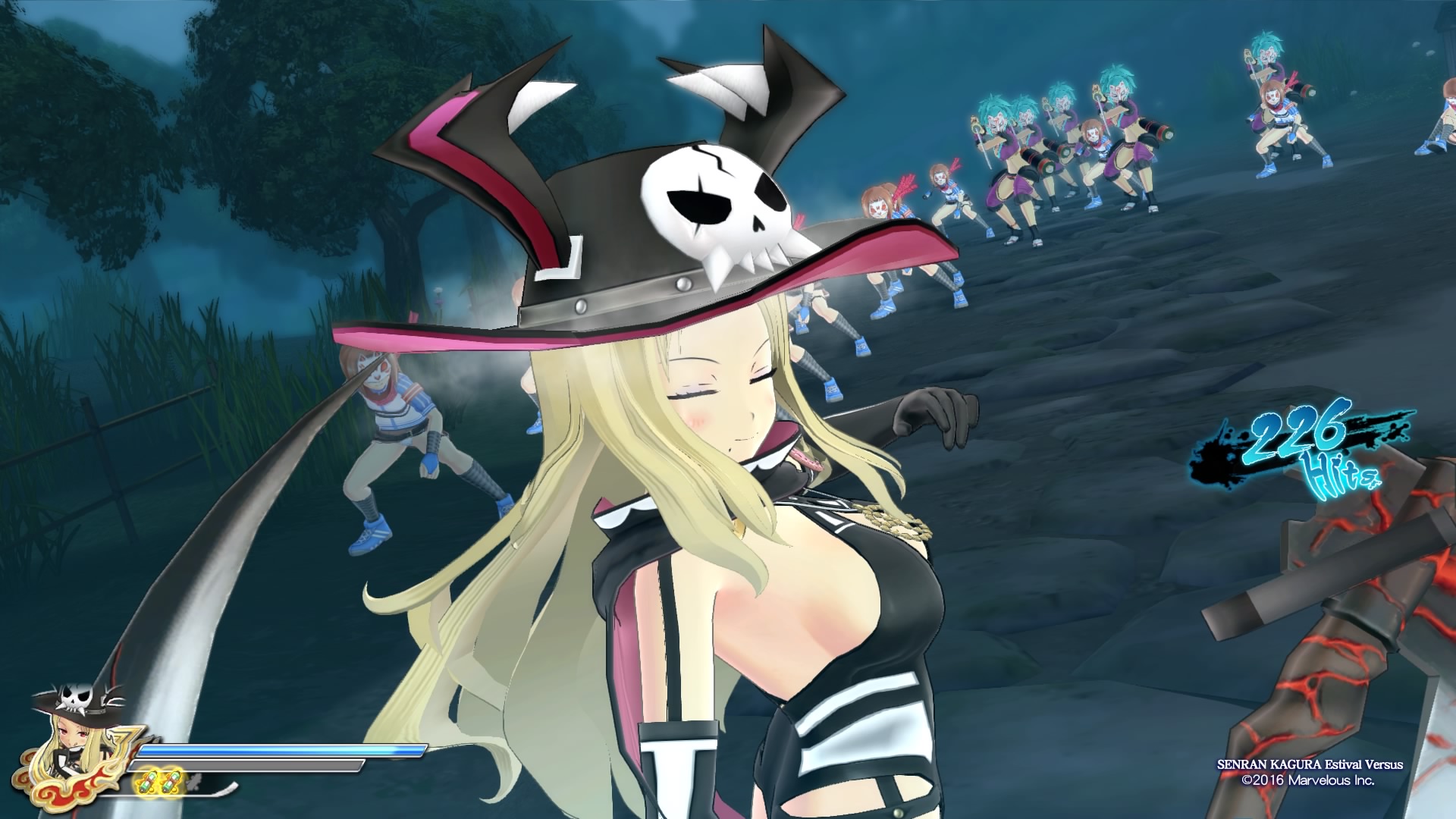 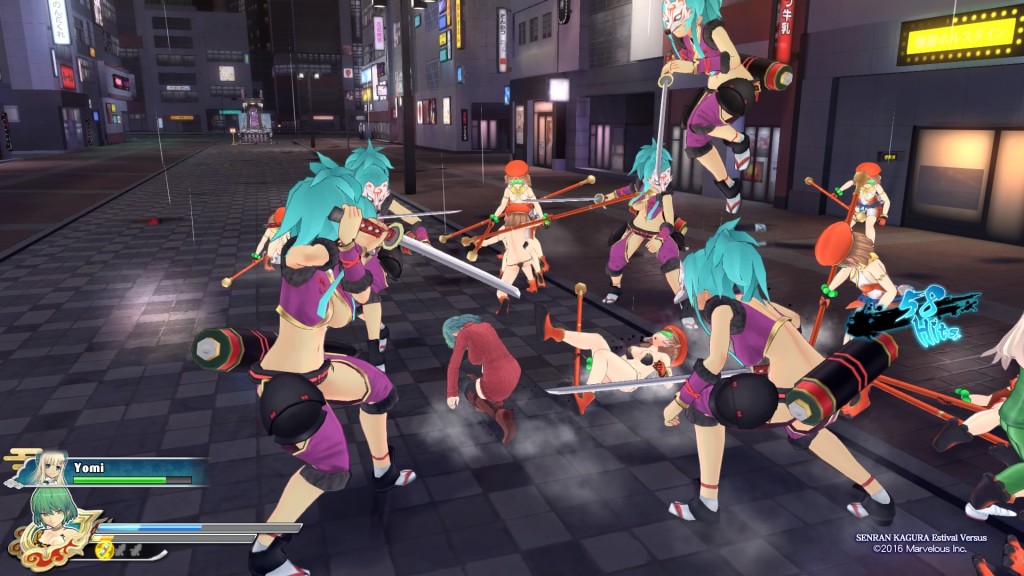 The old saying goes never judge a book by its cover, and when the book in question is Senran Kagura: Estival Versus and the cover is a collection of scantily clad anime girls, you’d think your first impressions won’t be far off.  But this may not necessarily be the case.  This is the home console debut for what has previously been a handheld series, and this time the girls are running at a rock solid 60fps and in full 1080p HD.

Senran Kagura is a third person brawler where you’ll  get to play as over twenty individual shinobi girls. Each level pits you against multiple enemy grunts and generally culminates in a battle with one, or more, of the other girls.  Superficially this sounds similar to the likes of Dynasty Warriors, but this isn’t the whole story.

The fighting on offer is not going to challenge the likes of Ninja Gaiden and it’s a much simpler combat system to get to grips with.  If you’ve played the previous games in the series then you’ll know exactly what to expect, there are a couple of new touches, such as wall running and dual aerial raves, but these can be ignored for the most part.  As with the other games in the series you’ve got three modes of combat which are all dependant on the level of clothing you’re wearing.  Each mode can be levelled up separately, providing you with bonuses and extra moves as you progress.  What this means in practice is with over twenty characters, and three styles of combat for each, there is a wide range of possibilities for you to explore.  Even if no individual mode carries the depth of combat from a dedicated brawler, there is still a lot on offer here.  By later levels combat can become a little repetitive, but the story keeps things moving at a fair lick and this works to keep things fresh. 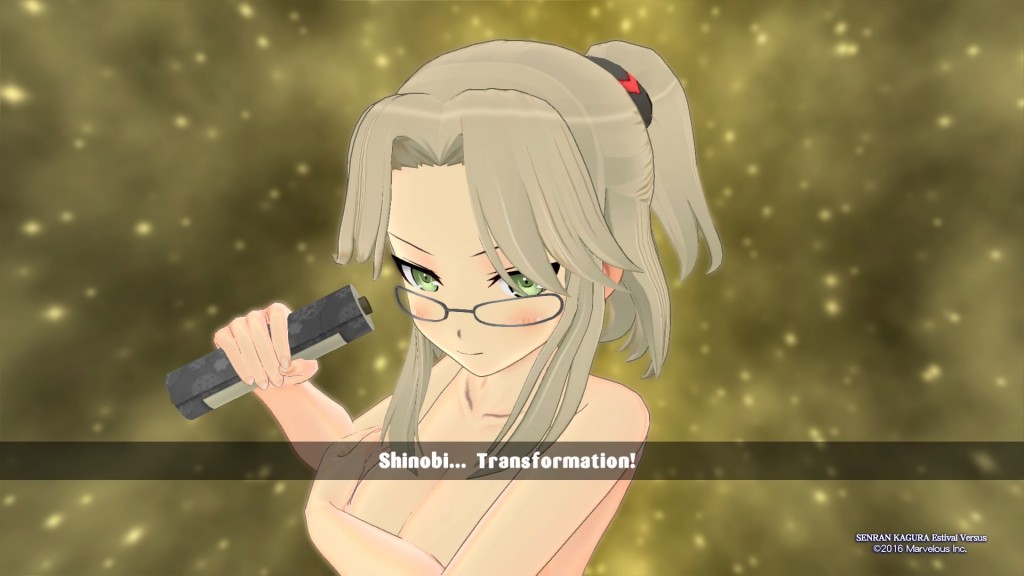 One thing Senran Kagura is famous for is the fan service and the way you can tear your clothes in combat.  Estival Versus takes this to a whole new level.  From the off you are presented with an introductory dance video showcasing all the girls assets (ah hem) as they dance in their bikinis.  Get into the combat and it’s even easier to find your clothing getting torn off.  Special finishing moves also ramp up the fan service to levels not seen before.   There’ll be boobs and bums coming at you from all angles and close ups of your girls when they loose clothing.  It’s all done in a tongue in cheek way, and with lashings of comedy thrown in, but make no mistake this is not a game for the prudes amongst you.

What really makes this game stand out though is the emphasis on getting to know the twenty plus characters available.  There are strong elements of visual novel in Senran Kagura, as each level is bookended with full voiced Japanese dialog in the form of on screen text, or in face forward talking sections.  This serves to break up the flow of the game and results in is a very unique feel.  Equal weight is given to both character development and combat.  These visual novel sections look great and can go on for a couple of minutes at a time, they also showcase some really clear graphics.  The same art style is used for the battles as well, but the anime look can make the stages come across as looking a little empty. 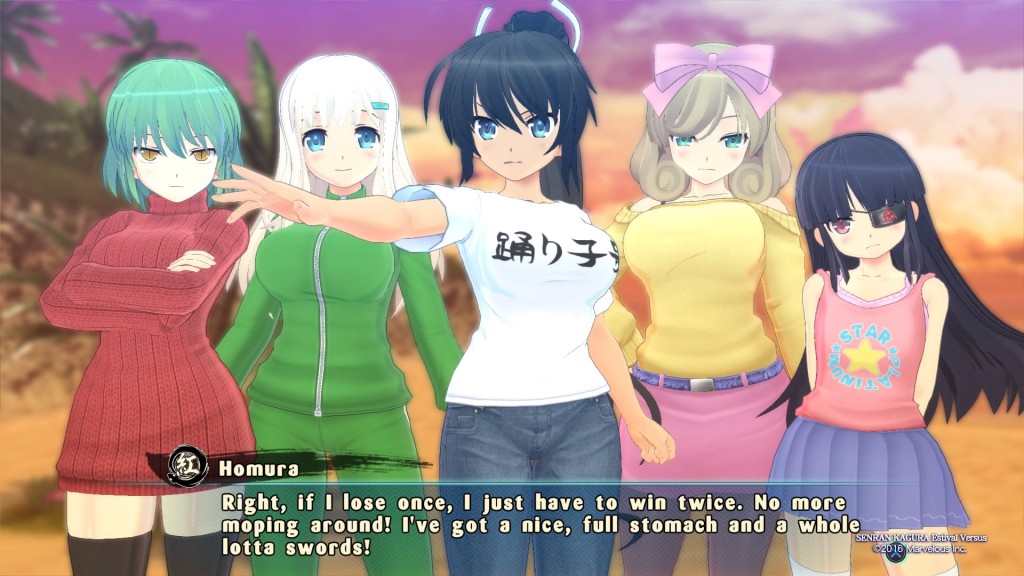 The main story follows all of the girls as they journey through one overarching plot, this means you’ll always be playing as a new girl each level.  This gives you loads of experience with each girl, and whilst a nice approach, it does mean it takes a while for you to settle on your favourite fighter.  Should you want to concentrate on one individual though, there is a companion story mode for each girl.  These companion pieces often follow a more comedic line, making them pretty enjoyable to play through.  Whilst there may be a lot of variation in the story being told, the same can’t be said for the levels on offer.  These generally cycle through a handful of different settings, and even re use some old settings from the earlier games.  A greater variation here would have helped the game no end.

Once you’ve done fighting you’ve the choice to look at the newly redesigned dressing room.  Here you are given free range to choose the clothing, accessories and lingerie for your girls.  Additionally you now also have the chance to pose five of your girls in a scene together.  It’s like a doll set where you can create whatever scene you want.  It’s no surprise you can’t share footage via the PS4 from these scenes, and all things considered it’s probably for the best.  Throughout the game you’ll unlock extras for the dressing room such as different poses for your girls and different locations for them to be placed in.  The permutations available here are practically endless. 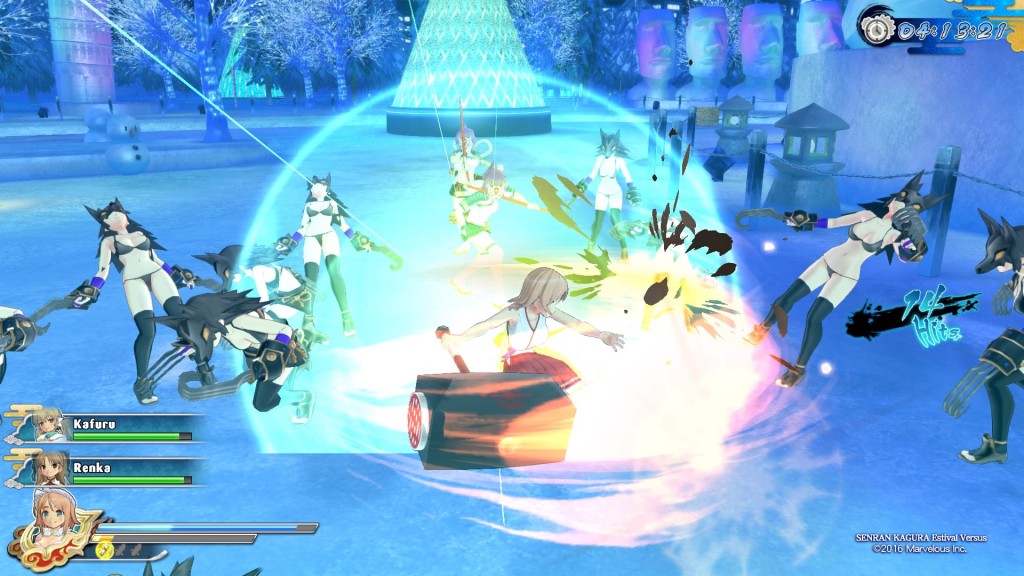 So what we’ve got here is a game which fans of the series will love.  It does all it’s ever done on the small screen and, brings it to life in glorious high def on your telly.  For those new to the series Senran Kagura is definitely more than you’d expect at first glance.  Yes the fan service has been ramped up exponentially, yes there is a competent and enjoyable combat element to the game but there is also a depth of story here which may come as a surprise to some.

Senran Kagura: Estival Versus
8 Overall
Pros
+ With over twenty characters there is plenty to do here
+ Boobs everywhere
+ Graphics looks really crisp and clear
+ Visual novel aspect of the game will come as a nice surprise
Cons
- Boobs everywhere
- Combat lacks any real depth and becomes repetitive by the later stages
- Lack of real variation in the level settings
- Fan service will put people off
Summary
As a character based brawler this is a lot of fun to play. The graphics are crisp and clear and there is a lot of depth to the story, as well as a lot of bouncy boobs. However, the rampant fan service will put many people off.