Road Rage is, like the name suggests, attempting to recapture the magic of Road Rash. There’s been a couple of efforts to recreate it but they haven’t quite succeeded. Dutch indie outfit Team 6 are the latest to try their hand at revitalising a classic formula. Can this really be done on the cheap? 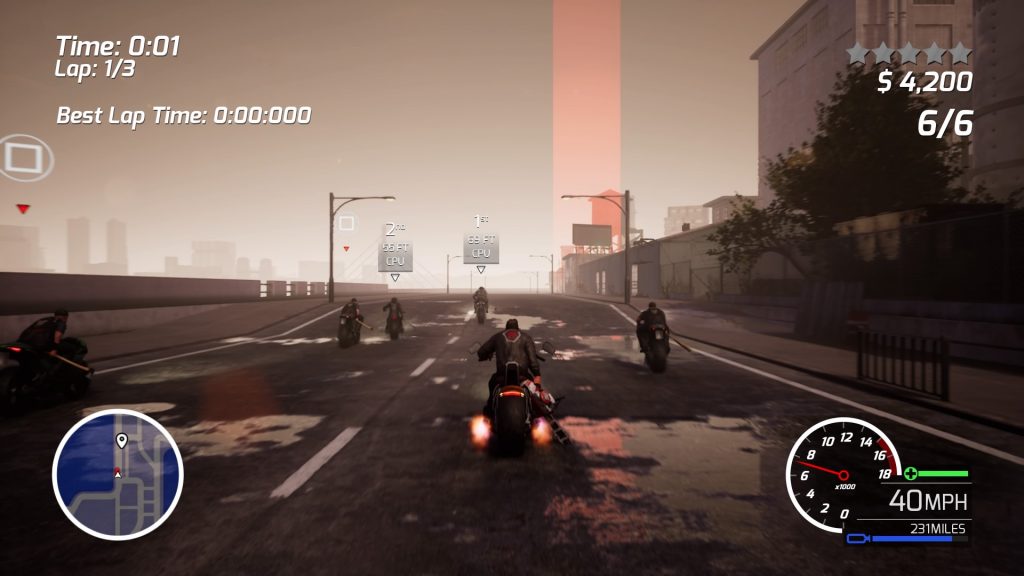 The twist on this occasion is an open world. The city of Ashen is your playground and, unfortunately, it’s fallen on hard times. Social, economic problems and motorcycle gangs are rife and it’s up to our nameless hero to battle said gangs across a vast environment. Story is given in a mostly text-driven way. There’s a single cutscene and text crawl that outlines where Ashen is at whilst missions are book-ended with text messages on your phone which do a decent job of telling you what’s to come. It’s cheap and the voice acting is flat and, whilst it tries to contextualise the forthcoming events, it’s hard for me to care about its narrative. It’s not presented with any flair to make it truly stand out and is quickly overshadowed by almost everything else.

There’s a lot to unpack about the visuals of Road Rage. The bike and car models look decent and there’s moments of nice lighting effects when you finally reach the outskirts of the city. Sadly, every other technical aspect falls woefully short. Pop-in is ever-present, traffic spawns into existence and some of the texture work looks primitive and behind the times. The road textures have a permanently wet appearance but there’s no weather effects. It’s quite bizarre. When the game features night races, you see the skybox turn from day to night before every event. 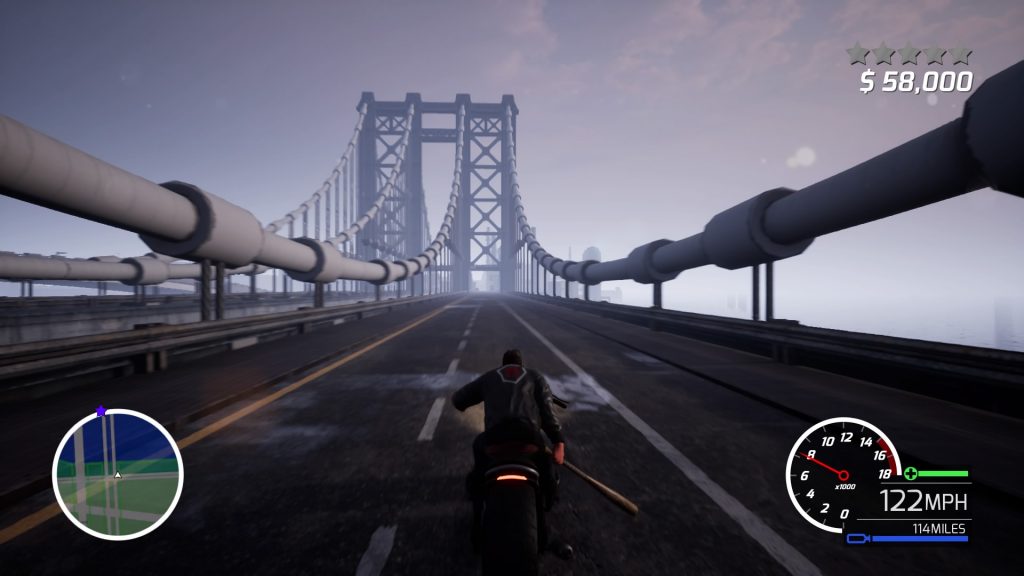 Musical accompaniment is provided by hastily produced knock-offs of much more popular hits. You’ll recognise Sweet Child ‘O (not) Mine and Smack (not) my Bitch Up. The music is unstoppable and repeats so often it’ll follow you to sleep. The engine notes of your bike sound alright, I guess.

The open world has it’s own set of issues to contend with. Whilst the roads you travel on are fun to ride on, you have to play a guessing game with what roadside objects will have collision detection on them. Lamps can be ghosted through and, for the most part, fences can be smashed. There are entire buildings in the early areas which have no points of collision at all and they’re not exactly off the beaten track. It has no polish or finishing touches to speak of. In fact, it feels like it could all break apart at any moment.

Navigation around Ashen comes courtesy of your phone’s map. There’s no modern niceties like GPS waypoints so you have to consider turns to take when dealing with races that require a little planning. Most events will involve checkpoints and your mini-map will helpfully point those out. For the more involved sprints, you very much have to make your own way. Something I don’t think I’ve done in a game since Grand Theft Auto III. The map’s easy enough to interpret but it certainly breaks the flow of those longer chases. 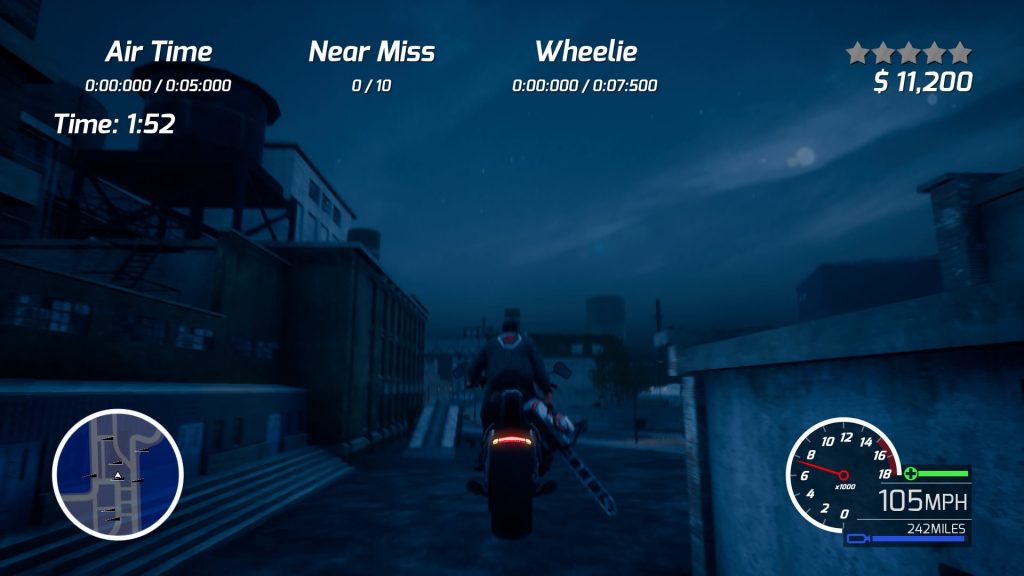 As it happens, events can be over quickly. There’s 42 main ones and they all seem to take under a few minutes to complete. They follow the same archetypes and will become familiar very quickly. You’ll see them several times over with the course being the only variable. They all carry the unpredictability of the AI meeting the physics engine which can lead to some daft, chaotic moments. They’ll give you a chance as they always are willing to crash on problematic corners. Success is sometimes as simple as keeping yourself out of trouble. Stunt runs become the most troublesome event. Thankfully, they’re spread thin on the main quest but they task you to do wheelies, gain air time and near miss some traffic. The first two objectives are simple enough but the latter has you relying on the game to spawn some cars nearby. For an open world city, Ashen’s got no congestion issues and traffic is sprinkled sparsely. It can lead to some genuine frustration in an otherwise forgiving campaign.

Well, I say forgiving. It can actually be agonising at times. Weapons don’t really offer much variety as they all swing like baseball bats. Even chainsaws and chains operate the same way with no one holding an advantage over the other. On top of that, there’s not much utilisation to them beyond the two specific event types that task you with takedowns. In races, you’re better off upgrading your bike to the fullest and then cheesing nitrous out to keep the field at bay. Events are also quickly restarted so an early setback can be forgotten about. Events can be revisited for cash which goes towards new, required bikes and upgrades. Whilst it’s not an especially long commitment, I don’t recall any fun either. There’s no surprises, no unique situations or tense battles. 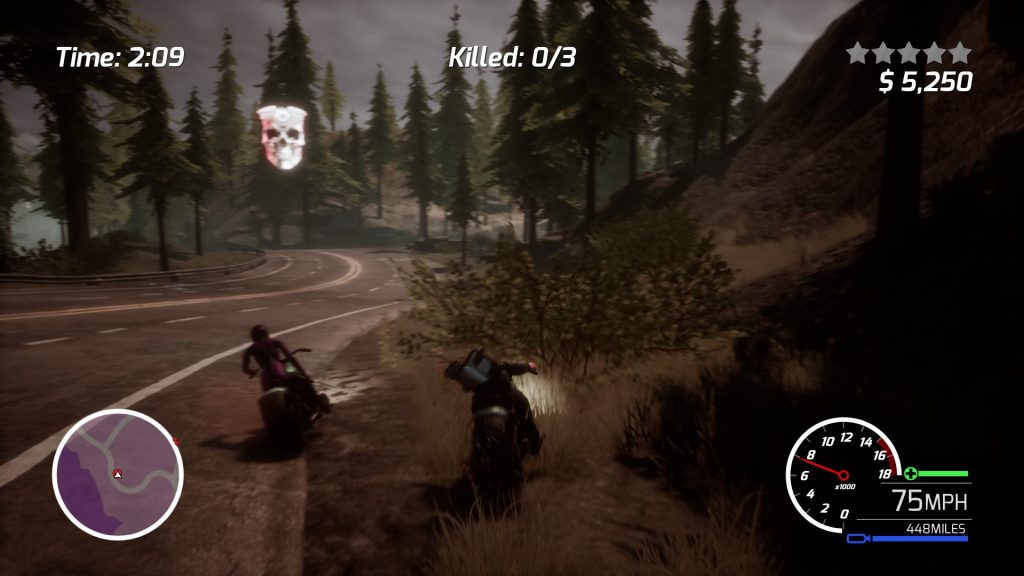 Side events offer more of the same events at varying difficulties. There’s collectables to find in each district but they can be hard to spot, at times. With a barebones map, you’re often trying to find that with the naked eye. Not that districts are especially big, mind.

If nothing else, Road Rage comes across as an unashamed budget effort. Made cheaply and sold at the lowest they could probably get away with and then marketed with a trailer containing the most passionate spiel they could muster. I hope Team 6 can do better than this.

Road Rage
3 Overall
Pros
+ The bike handling is fine.
+ The car and bike models look decent.
Cons
- Technically unfinished on every other visual level.
- Events can become an exercise in frustration.
- Rider AI is not road legal.
- Barebones presentation makes the narrative feel like a non-event.
Summary
Road Rage is a lemon. Execution is poor at almost every step with only the bike handling coming out with any positives. Even for the budget price tag, I can't recommend this faltering, frustrating ride.