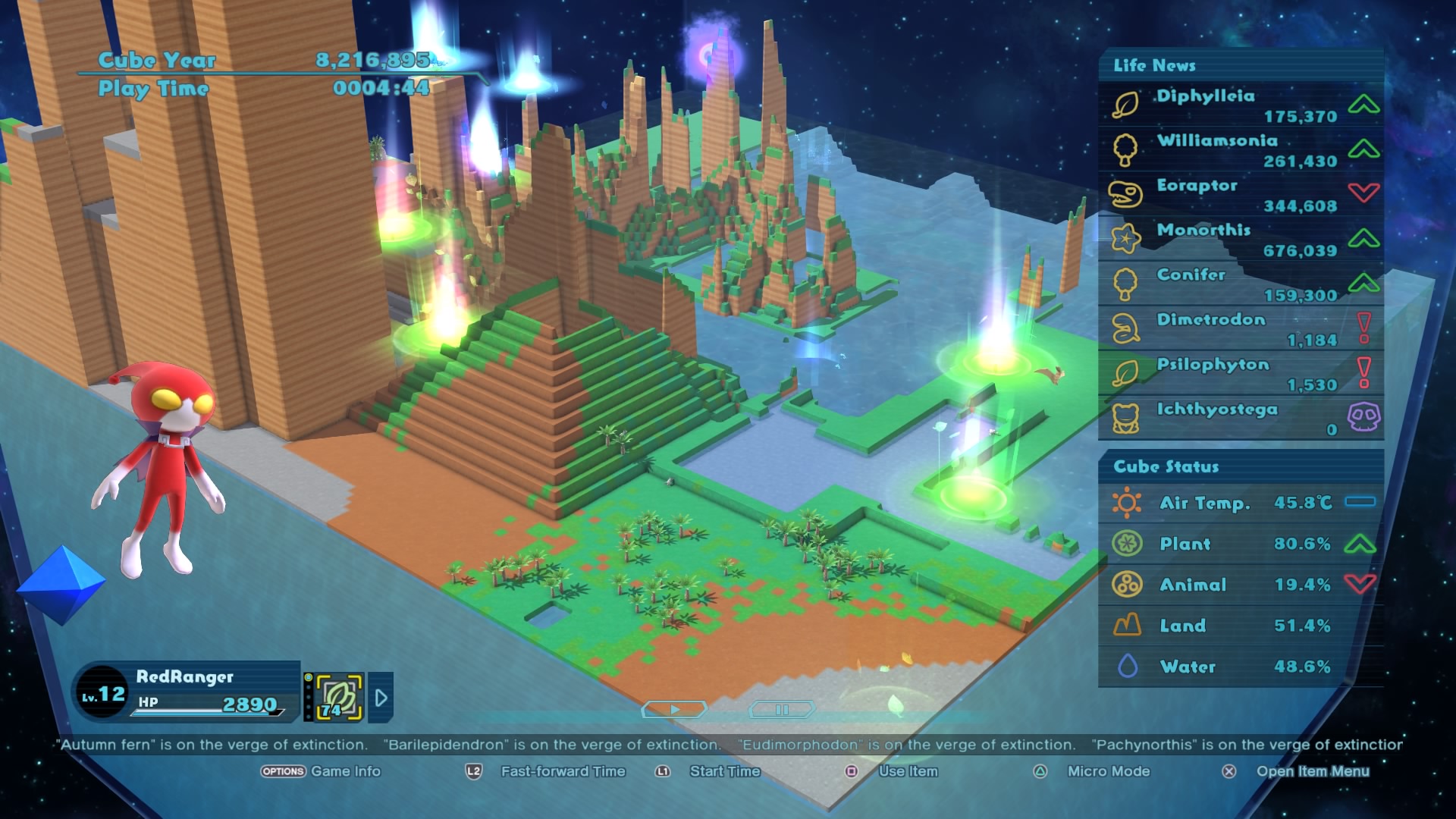 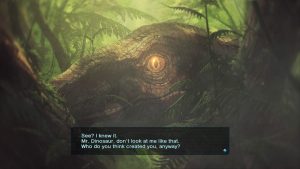 Birthdays the Beginning is an odd little game that has you changing the ecosystem of a small cube to birth and evolve life. The concept may sound similar to Viva Pinata but in execution it is actually far different.

For some reason there is a story involving your character finding a map in the pages of one of your grandfather’s books. Following this map warps you to this small cube where a little floating diamond named Navi gives you the basic instructions. It’s not really necessary but it doesn’t outstay its welcome either.

You control a little avatar that looks like a Power Ranger who can fly around the map, basically acting as a cursor. The world is made up of blocks a la Minecraft and whatever block he’s hovering over is the active square. You can raise or lower the land to whatever shape you see fit, but Navi gives you instructions on how to create specific life. Adapting the land costs HP but this is easily regenerated.

Raising the land lowers the temperature, whilst the more water that exists on the cube the warmer it is. It might not sound like much but these are the primary tools that you use to create the 292 forms of life. Early on you’ll be creating very simple creatures and vegetation. Once born you can log them in your library by finding them in the world and pressing the touch pad to ‘capture’ them. Your library will also explain how to produce other creatures, but will hold back some information until you capture them. 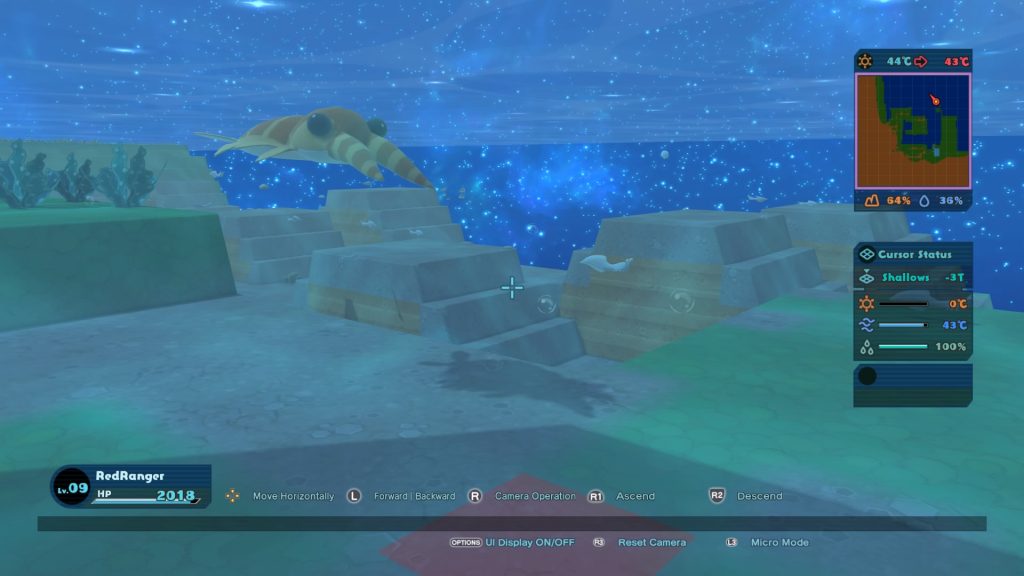 In the story mode its up to you if you want to try and create as many creatures as possible or follow Navi’s advice and just go along the critical path. Each creature you capture gives your little avatar experience and when he levels up you get a boost to HP which in turns allows you to manipulate the environment for longer without stopping or using items. Items appear within the world as you work and are generally responsive to you. The more trees you have the more HP restoring items you may get or when enough animals are captured a Seed of Evolution will appear which lets you short cut your way to the next stage of evolution for a certain creature for example.

As you manipulate the land time is actually at a stand still. Creatures will move around and appear to be active but for your actions to actually take effect you have to move your viewpoint to Macro Mode. In this mode you can advance time slowly which will regenerate your HP or you can fast forward time at the cost of HP. On the right hand side of the screen is a read out that updates as animals are born, procreate and become extinct and the basic stats of your cube.

That is the basic loop of the gameplay. You change the land in some way, lowering or raising the temperature and then you fast forward time to see the fruits of your labour. Initially almost every change you make will grant new life for you to capture but as you progress things get more complicated, with extra requirements needed to unlock new animals. 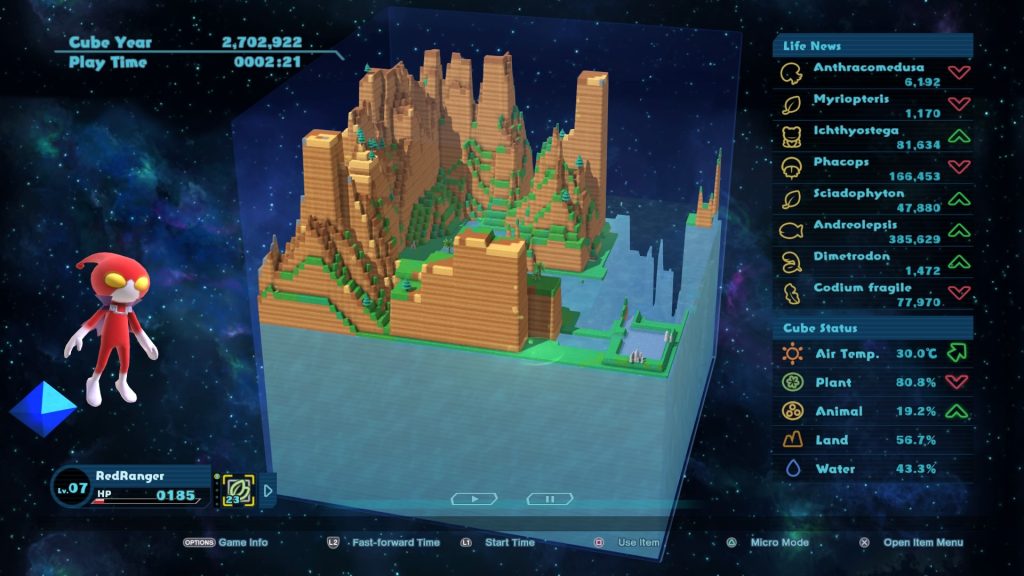 This was where things came apart for me a little. Navi would ask me to birth a new animal type, I’d look to see what was required and then adjust the land as appropriate. You then just sit and wait in Macro Mode whilst stuff just happens. Sometimes what I wanted to happen happened, sometimes it didn’t. Hell, sometimes nothing new happened. The game doesn’t provide feedback as to why the thing you want to happen isn’t happening, even though it appears you’ve satisfied all the requirements. This was exacerbated even more when I was struggling to create a Tyrannosaurus (or rather, the thing that would lead to me making a Tyrannosaurus) so I messed around, lowering the temperature, raising the temperature before returning to where I was originally. At this point it worked, I don’t know why, but after sitting there for ages in Macro Mode waiting for something to happen, this time it did happen.

It’s this that will make some people love Birthdays the Beginnings but what ultimately drove me away. Waiting is not gameplay and I’m the type of person who, when I press the jump button, I want to jump. In this game, you do something and sometimes you get the outcome you’re hoping for, other times you get something else and then at the worst times you get nothing. You have to wait to see what you get but how long do you wait? If I wait long enough will the thing I want to happen happen or if it doesn’t happen within a minute is it never going to happen?

For those that do get invested each chapter increases the size of your cube and the game dishes out stars for achieving certain goals like clearing a stage within a certain time and capturing all the possible organisms. There is also a Challenge mode which asks you to birth certain creatures but with special conditions and Free Mode which is as it sounds, a sand box mode which lets you pick your cube size and import your avatar and creature data if you choose or start from scratch. 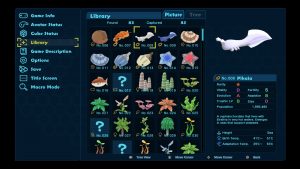 There are some control issues in that they can be a bit clumsy and imprecise but it’s not an action game so you can live with it. As the cubes get bigger there is some frame rate drops which aren’t pleasant but again, it’s not like you’re going to fail because of them. If you can live with just watching time advance, hoping for a new creature to be born then I think you can live with these foibles.

Birthdays the Beginnings is more of a passive experience than a game and some people will love it for it. Others, like me, may find the vague instructions and the lack of interaction a bit tedious and a put off. It’s certainly an interesting curio but will absolutely not be to everyone’s tastes.

Birthdays the Beginning
5 Overall
Pros
+ An interesting premise + Can be absorbing + Cute creature designs
Cons
- Passive gameplay - Dodgy controls - Frame rate issues
Summary
Birthdays the Beginning offers a passive experience for those who want it. The vague instructions and waiting around will put plenty off but others will be absorbed by the quest to create life.