Every so often, we get sent a game that we’ve never heard of. In the case of games like Guts and Glory this particular reviewer does a quick web search. On the strength of the few images, we’ll sometimes take a punt on an outlier like Guts and Glory. Sometimes it pays off as it did with the superb Death Road To Canada, other times you end up with a game that you regret ever having started. We’re sad to report that Guts and Glory falls into the latter category.

The image of a man riding a bike giving someone a backie was enough to pique our interest. But within ten minutes of starting to play, it was clear we’d made a terrible terrible mistake. 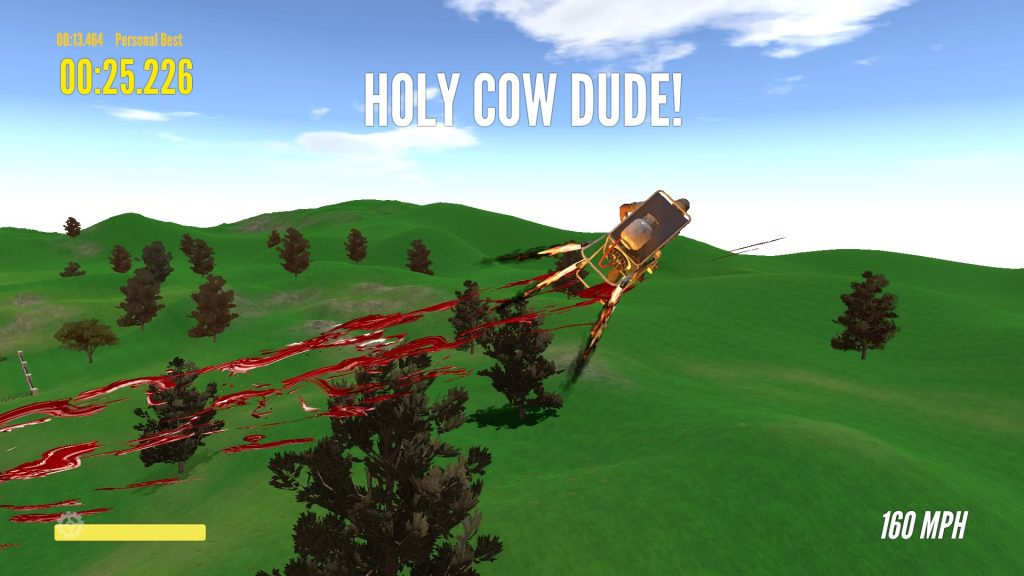 On the face of it Guts and Glory is an indie game by a first time dev. That in itself usually wouldn’t present a problem, but it is evident this is a game in thrall to the likes of Twitch and YouTube streamers and a host of Kickstarter backers from r/gaming. The second isn’t the problem, it’s the former. No doubt this game makes for great commentary as you play, but sadly there’s not much in the way of game otherwise.

Our man HakJak has used Unity in conjunction with a host of generic and community sourced 3D model assets. The placeholder models from the Kickstarter gifs have made their way into this, the full release game. This gives the game a rather plain look but that’s not the main problem. 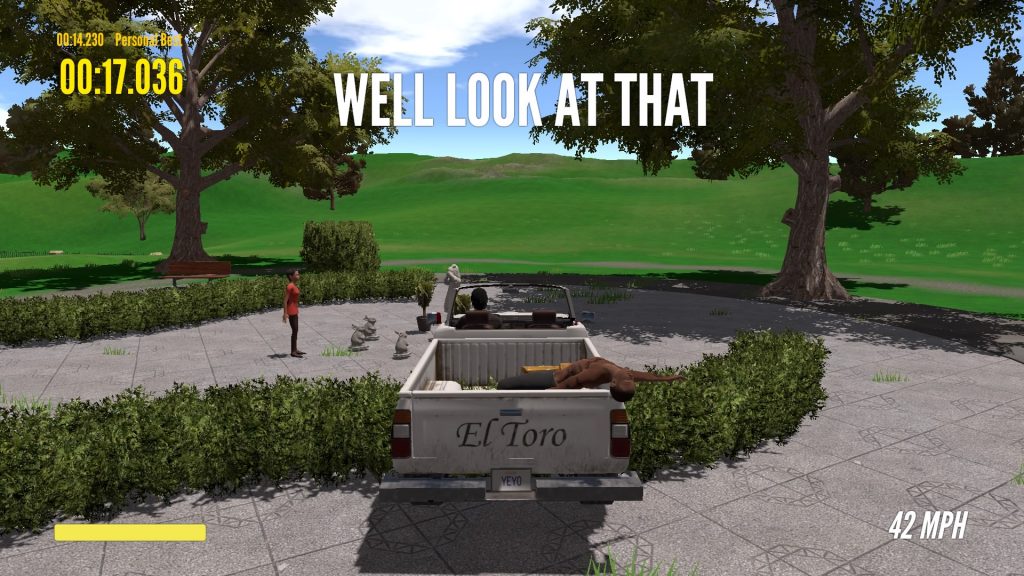 It’s the gameplay that’s the issue. It generally follows the same template each time. You have to make your way, via a series of checkpoints, to a goal on a rickety physics-modelled vehicle, be it a bicycle or a family car. Or even a rocket propelled lawn chair. This isn’t as much fun as it sounds. It even had a glitchy trophy that didn’t unlock when we fulfilled the criteria of finishing a course using it. Score!

If it were just a point to point racer, we could get past that. When obstacles designed to maim and injure you come into the equation that it all starts to unravel. One early level features an innocuous enough suburban road. Only there’s landmines to avoid. Okay, so far so explosive. These in conjunction with unerringly accurate dodgeball cannons that prove immediately fatal make for an incredibly frustrating section.

You can’t tell you’ve been targeted by a cannon until it’s too late and your character model has been turned into so much chum. You feel compelled to retry over and over again. It was at this point that we unlocked our first and only trophy, a shiny turd as it happened. 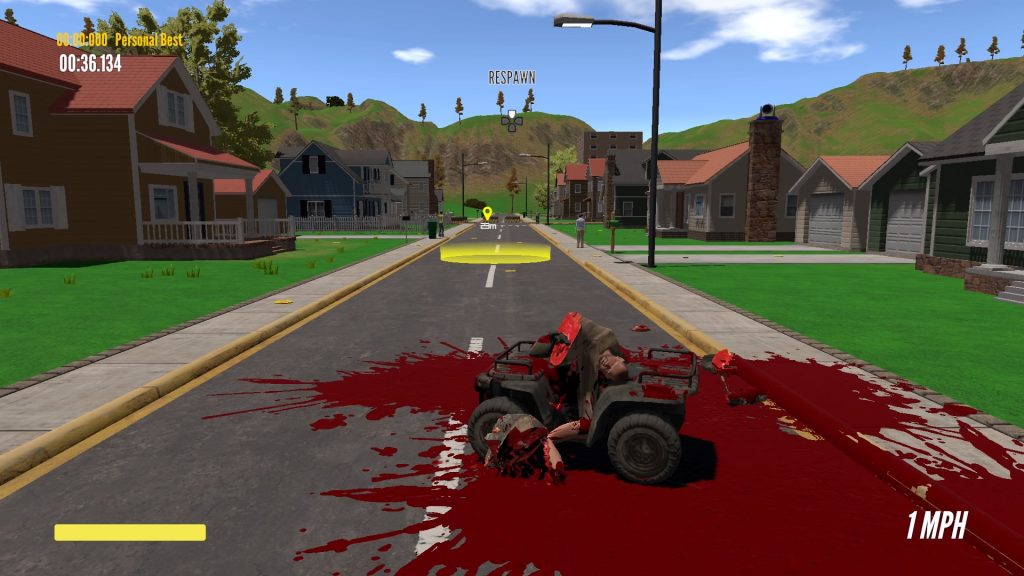 But still we persevered despite all this. Another level introduces spinning blades that also prove immediately fatal upon contact with them. The imprecise controls make themselves known at this point. Maybe they work better with a mouse and keyboard. But for us at least, they really didn’t lend themselves to precisely maneuvering through various deathtraps. Yet more deaths ensued and we sacked off another level to try another.

There are eight groups of levels to play through, but by the time we explored the extra levels we didn’t want to play more. As a reviewer this doesn’t sit well with us, but there’s no fun to be had here. 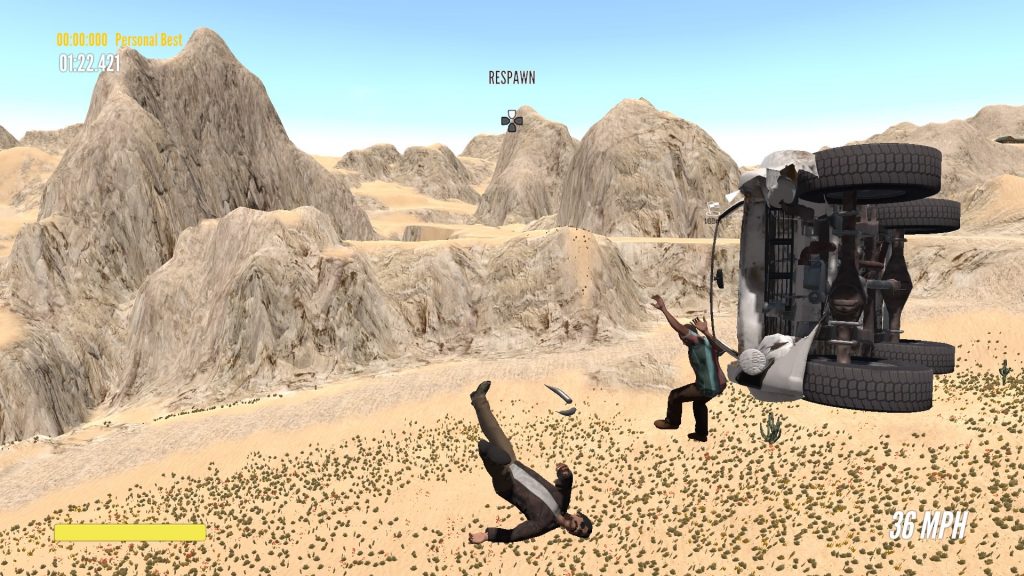 The music is plinky MIDI styled stuff, very much a throwback to days of yore when we played our games on a EGA display on a 286 with a Gravis joystick (look it up, kids). In evoking nostalgia for those days, it’s probably not achieving what it set out to do.

It’s entirely possible this game has sailed wide of the mark for us, as we’re not millennial Twitch streamers with subscribers and viewers to appease. It’s probably hilarious if you’re fourteen, just not forty four. We like to play games for fun, but Guts and Glory leaves little more than a bad taste in our mouths and a trophy list ghost we’re never likely to revisit.

Summary
Physics-based silliness aimed at streamers and people who are amused by dismembered limbs and random deaths. Avoid otherwise.