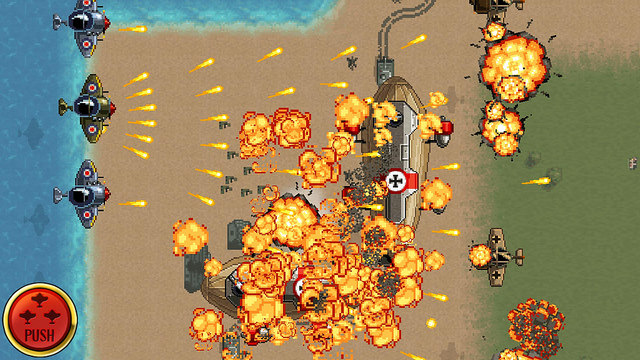 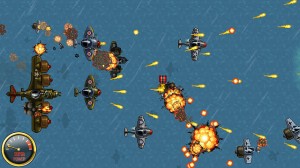 Aces of the Luftwaffe is a retro-flavoured 2D shoot ’em up that has no business being on a PS4.  Don’t get me wrong, I love retro gaming and even recently went to the trouble of setting up a Japanese PSN account and buying a 3000Yen card just so that I could play the 1984 arcade game Bomb Jack on my PS4.  I can even accept games like Aqua Kitty and Rock Boshers coming along and using roughly 0.001% of the PS4’s hardware capacity.  But even I draw the line at made-for-mobile horseshit like this.

The game itself is a World War II-era affair that sees you playing as on of three pilots as you single-handedly take on the might of the German Air Force.  The setting is similar to Midway’s classic 194x series and the previous-gen 1942: Joint Strike proved that there’s still life left in this setting as long as you make sure you put some depth into the gameplay and make everything solid.

Unfortunately, Aces of the Luftwaffe is just a collosal fuck up right from the word go.

Although it is seen from above, like the aforementioned 1942, it scrolls horizontally as if it was made to be played on a vertically held tablet and they didn’t fancy converting it or adding some side-panel graphics.  It is so obviously meant to be played in ‘tate’ mode and while it doesn’t affect the gameplay, it does just seem very lazy.  However, worse than that is the fact that your ship actually fucking auto-fires.   That’s right.  Now there’s a reason for that in iOS/Android games:  touch screen buttons are horrible.  But on a fucking PS4?  With its DualShock 4 controller with eight useable buttons?  Why have they done this?  The answer is because they don’t know or understand the hardware.  So, if you want to feel connected to the action, this isn’t the game for you. 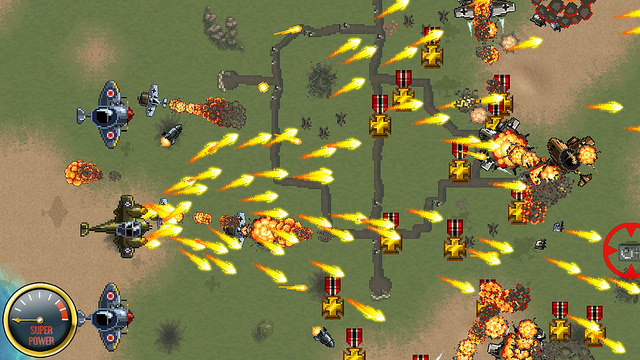 The game itself is broken down into five chapters each of which has three main levels and a boss battle.  Because the backdrops are completely uninteractive, the gameplay has basically zero variation.  I’m writing this at 9:41pm having actually fallen asleep playing this earlier.  Yes.  I actually fell asleep.

A shoot ’em up at least has to have power-ups and Aces does throw in the usual shotgun, spray guns and occasional wingmen but because the levels have no set-pieces and no scenery interaction to break them up, there’s no sense of tactical play when it comes to using power-ups.  In 1942: Joint Strike (which isn’t the best example of the genre, but is a good recent comparison to make), your weapon choices mattered.  Here nothing seems to matter.  There’s no sense of where you are in the level and indeed the game goes to such ridiculous lengths to keep you out of the loop that you don’t even have a score.  It’s a shoot ’em up that doesn’t have a score counter.  You can’t make this shit up.

There is a degree of levelling up to the game.  As you progress through levels, you’ll pick up medals and these can be traded in for a few things.  On iOS and Android the medal system was a way of introducing IAPs but they don’t seem to be available here so you’ll be grinding through levels you’ve already beaten in order to unlock later levels (yep, beat Chapter One and you need to find 350 medals to unlock Chapter Two and then 750 medals to unlock each of the following chapters) and to level up your ship’s firepower enough to actually beat those levels. 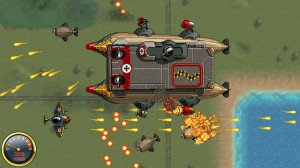 That’s right.  A shoot ’em up where you have to grind.  It completely betrays the game’s mobile roots and where IAPs have turned the once-innovative iOS scene into a gaming hell where you have to suffer to get your gameplay, we still don’t like to see that on actual consoles where people are paying good money for their games.  Sure, Aces is quite cheap but at four quid it’s still roughly four quid more than it should be.

While we’re fans of hand-drawn retro graphics, what’s on offer here is remarkably dull with flat, uninteresting backdrops and some very generic plane designs and a generic military-style theme tune does little to liven up the action.  Indeed the presentation seems so flat throughout.  It really does feel as if they’ve phoned in this entire game.  There’s just nothing exciting about it.

As a fan of shoot ’em ups, both retro and modern, I was genuinely interested to see what Aces of the Luftwaffe had to offer but this is a dull game with literally no redeeming qualities beyond the fact that it is playable and not broken.  Beyond that it has nothing going for it.

If you’re going to make a shoot ’em up, look at the genre and put in the essentials.  A good risk vs. reward score mechanic, interesting levels, exciting weapon power-ups and challenging but fun bosses.  If you’re so fucking inept, you can’t even put a score counter in then you’ve got no place making shoot ’em ups in the first place.

Aces of the Luftwaffe
2 Overall
Pros
+ Maintains basic playability. + At least you aren't playing as the Nazis.
Cons
- Powerfully dull gameplay. - Requires grinding to make progress. - Insipid graphics. - The least satisfying shoot 'em up ever made.
Summary
An average iOS game ported, inappropriately, to the PS4. The lack of care shown here is only matched by the lack of excitement in the gameplay. This is one of the worst games on the system.

One thought on “Aces of the Luftwaffe – PS4 Review”