I think there’s been plenty of good party games that have hit over the last decade. Whilst I’d never call it saturated, the genre’s filled with some quality for local and online combatants alike. The latest one to come my way is A Gummy’s Life. A multiplayer brawler coming from EP Games, this physics-based effort takes some big cues from a notable contemporary.  Luckily it does strive to carve it’s own niche with a candy-filled aesthetic and a sprinkling of individual game modes. 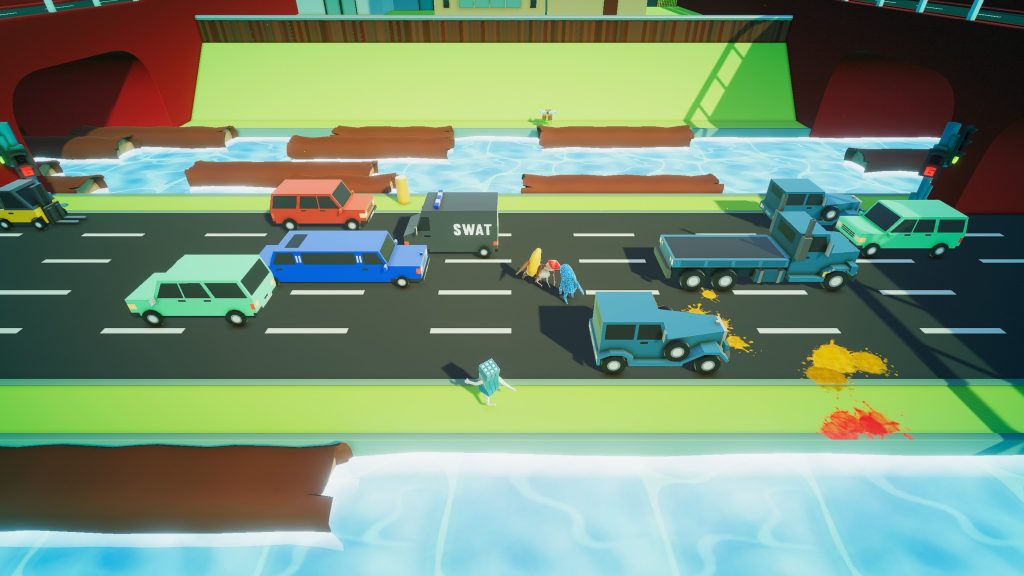 A Gummy’s Life is a four-player brawler with controls not too far removed from Gang Beasts. The shoulder buttons control a fist, face buttons deal out kicks and headbutts and it results in something chaotic and tactile. Holding the shoulder buttons allow you to grab and this can be used to move objects, climb or dump opponents out.

It can take a little getting used to but I find the controls work well. The punches maybe don’t feel as meaty as they should but you get plenty of feedback when fists start flying. It does carry that fight or flight nature of a tough scrap and I’ve not found the controls to be detrimental. Climbing obstacles can require some coordination and I almost discovered it by accident. It adds to your options in terms of escape and gives players creative ways to interact with the game’s colourful environments. 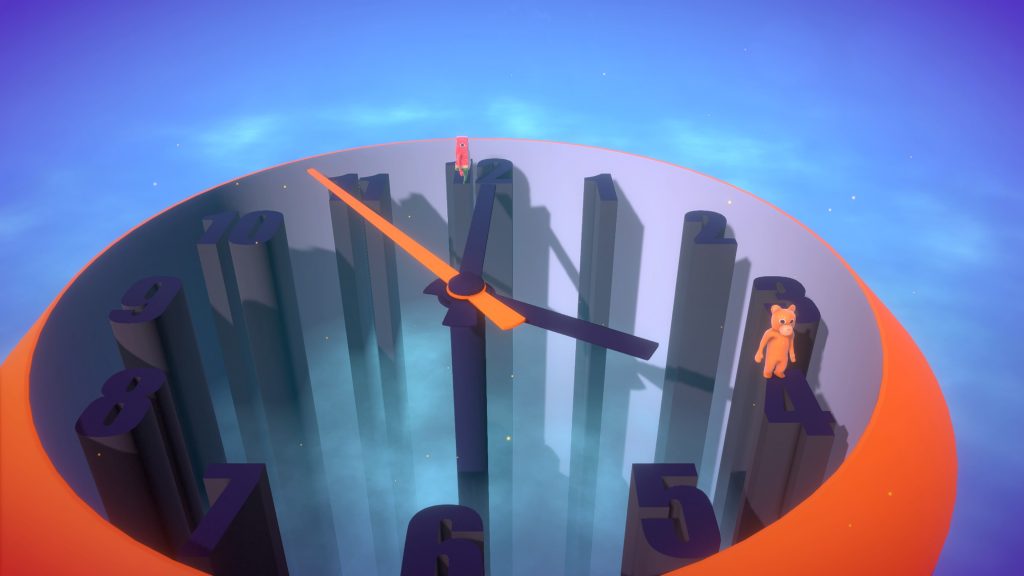 If there’s one thing the fights don’t quite convey is how close your character is to death. Most gummies die to gravity as they’re dumped out of the ring but you can also explode into a juicy mess once enough damage has been dealt. I find it very hard to decipher where that limit is. Some rounds can last forever so I do wonder if staying in trouble puts you more at risk or if the game’s deciding to call time on you.

The gummies come in a variety of sugar-coated designs. They all function the same but they all have a charming look to them. You can customise their colour and gain cosmetic additions by playing online matches. There’s something enticing about seeing a player wearing glasses or a hat and making it your business to knock that off. It’s also endearing to see someone pick up a dropped piece of clothing. These also serve as a way to distinguish two players that might have picked the same gummy. It can happen and I do find sometimes the fighters can mesh together.

There’s nineteen maps on offer which is a sizeable amount. Each area seems to have their own sense of character and gimmicks. Some have moving platforms, cannons and hazards that all play into a match. There’s not a lot to dislike about them and the variety keeps the longer sessions feeling fresh and unpredictable. Some maps like the clock have some cruel twists so a little prior knowledge can go a long way. I think I enjoy all of them, with the exception of one map that focuses on climbing to higher platforms. Direct competition ceases to be the focus and I just don’t gel with it. 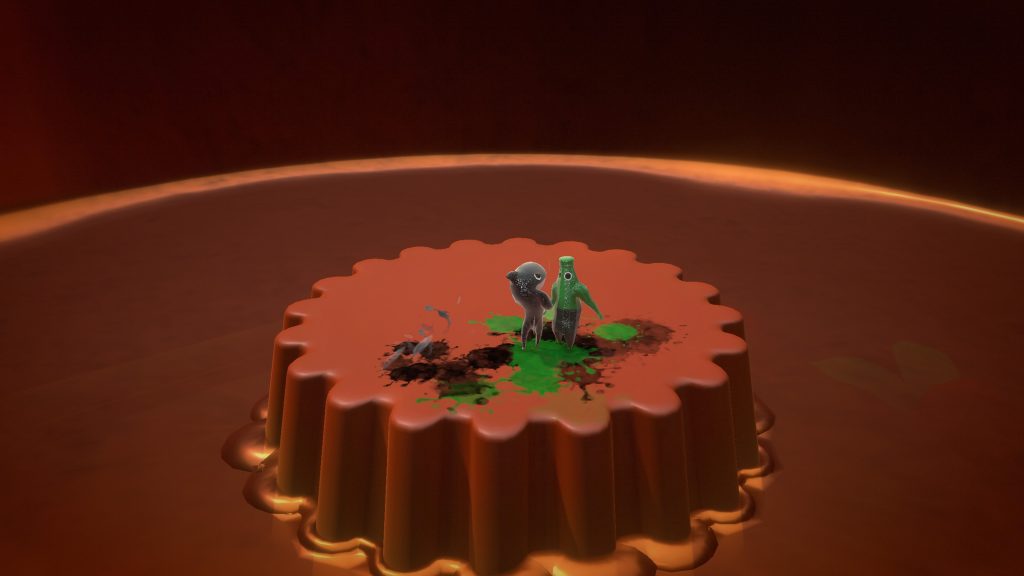 As well as the standard free-for-all, there’s a few other modes to involve yourself with. Hot potato tasks you with being the last one standing whilst passing a bomb between the competitors. Touching others hands the bomb over to them but they can just as easily hand it back. It’s an entertaining mode that does add a time pressure to the proceedings. Other than that, you can pair-up for team deathmatch which allows for some cooperative play. The remaining mode is King of the Hill which effectively works out as territory control. A piece of candy will drop from the heavens at random points on the map and reaching that gets you a point. The first person to make it gets a point and the first to five wins the round. This leads to some frantic dashes and good fortune as the random element leads to rounds that are hard to predict.

These modes all tend to work well, although King of the Hill doesn’t lend itself greatly to the smaller maps. They have segregated some of the maps for specific use in this mode but it doesn’t entirely rule out the problem. For the most part, I find the majority of modes and maps appealing and it’s nice to see a party game where you can just plough through rounds without any interruptions from a disliked map or set of rules. 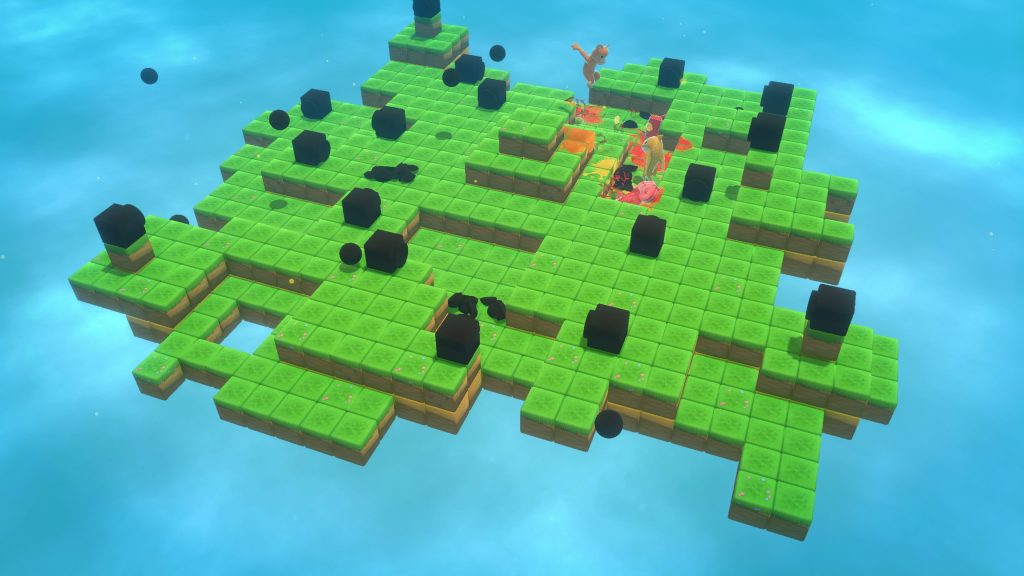 A Gummy’s Life really shines through it’s presentation. Everything is bright and the visuals look clean and polished. The candy motif really does wonders to show a really artificial and sickeningly sweet world. The juice splatters of connected punches help tell the tail of a match and really coat the environment well. The announcer doesn’t do anything special but their enthusiasm is worth noting. It’s a shame the soundtrack sounds a little sedate. It tends to cycle through rather than have a track for each individual level and they don’t always convey a frantic tempo.

With friends, this is a good scrap and the AI bots certainly compete well enough to give single-players a decent time. It’s a pity the online community for this hasn’t come to fruition. There is cross-play which works well but I’m struggling to find full lobbies at the time of writing. I did find performance to be a little jittery but I can’t tell if that’s a wider problem.  You can fill the spare slots with bots but real-world competition is where you’ll get the most joy from A Gummy’s Life.

A Gummy's Life
7 Overall
Pros
+ A really colourful, polished aesthetic.
+ Combat is fun, although some strikes lack a little weight.
+ A varied number of maps to play with.
+ AI bots seem fairly competitive.
Cons
- Online looks to be barren.
- I find the soundtrack to be a little underwhelming.
- Knockouts seem random.
- Sometimes it can be hard to tell competitors apart.
Summary
A Gummy's Life has some very clear inspirations and, at times it can be quite brazen. The colourful presentation does well to set it apart and the game modes remain fun, even if the online portion struggles from a lack of interest. The fighting can be tactile and occasionally chaotic and, whilst the AI seems capable, this game feels more engaging with friends. The map variety gives you plenty to work with although the combat lacks a little impact. There's an enjoyable core here with just a few niggles that can potentially be ironed out.