While we’re not sure that players are totally into this whole old-school retro flavour that indie devs keep pumping, it’s pretty obvious that these 8 and 16-bit aesthetics aren’t going anywhere.  And the retro thing can mean anything these days.  As long as you can make out the individual pixels of a sprite, that’s basically enough and that fairly easy to match criteria means that we seem to get several of these things every month on PSN.

At one extreme of the retro aesthetic you get high quality gems like Dead Cells, games that are lovingly detailed and fantastically balanced to play.  Of course, it takes its cues from the 16-bit era and tries to take them beyond the limit of what was possible with hardware back in the day.  Zeroptian Invasion is very much at the other end of the scale offering the most basic of visuals married to gameplay that apes one of the earliest classic coin-ops and doesn’t so much run with it but rather sit down next to it and have a little nap. 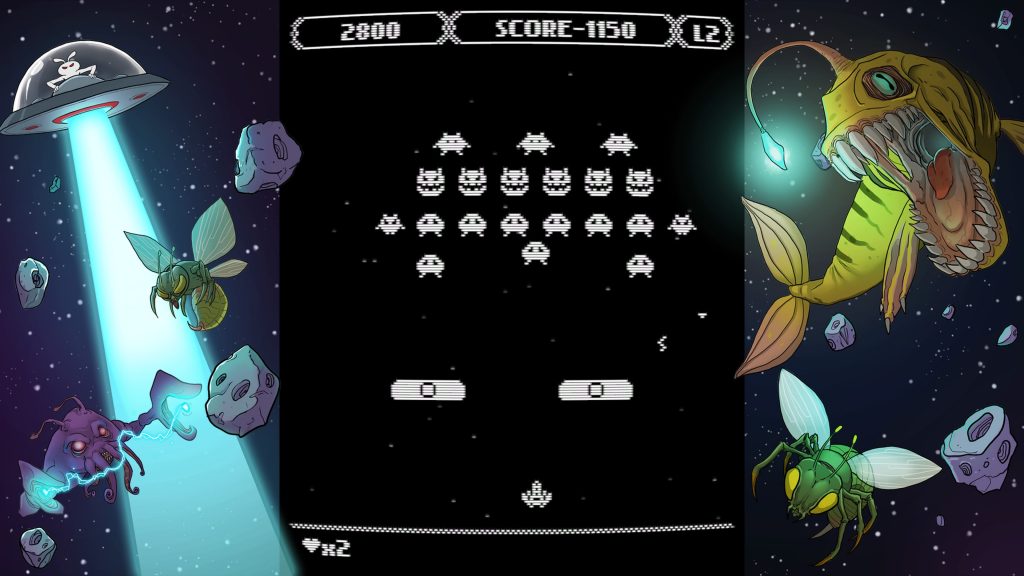 The inspiration here is Taito’s 1978 coin op Space Invaders.  Now look, I’m not really a fan of the original game.  Fun fact:  I first saw it next to a Galaxians cabinet in the ’80s and as a very young child was able to see that Space Invaders was rubbish.  Consider that my first ever review.  But latter Space Invaders titles such as Infinity Gene and Extreme are straight bangers, taking the original concept and making it great.  So, Zeroptian Invasion has plenty of source material out there to draw from.

It doesn’t though.  This is pretty much Space Invaders in all of its limited 2D movement glory.  Eventually the Zeroptians will leave their row formation and start behaving like Galaxians but you’ll still be doing nothing but moving left and right and shooting upwards.  Some 40 years after the original came out, we want to see a lot more from our indie efforts. 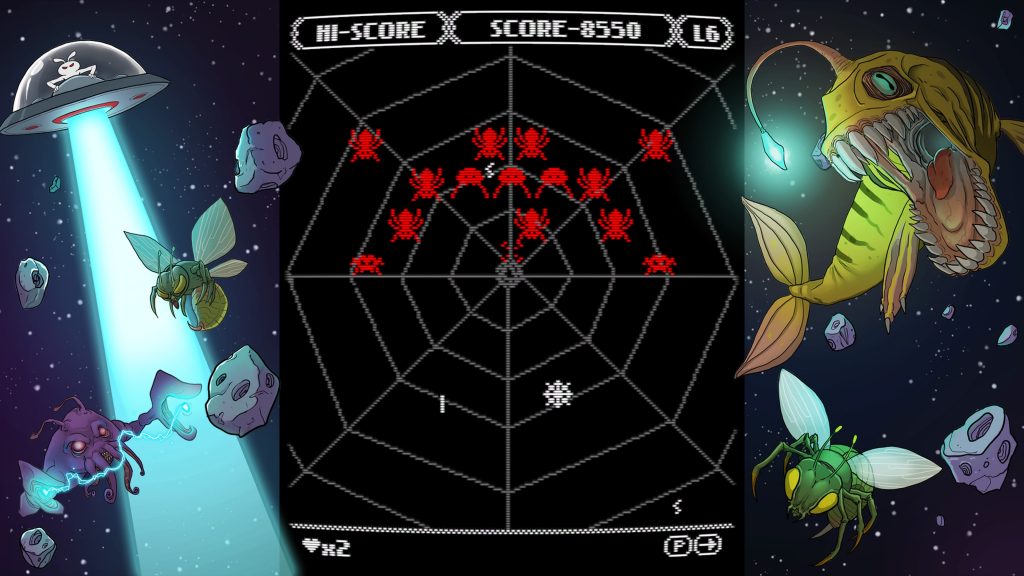 Normally I’d be introducing the gameplay mechanics in a much more detailed way but that’s it.  In an effort to add something, the game drops three types of power up at you but these are absolute trash.  (S) adds a one-hit shield to supplement your one extra life, (P) allows you to fire an extra bullet and (–>) offers you a speed increase so subtle that we actually weren’t sure it did anything.  There are no real instructions to explain anything because there’s really nothing to explain and that’s very telling.

Well, there are boss battles that appear after a few stages.  Beat those and you’ll get a Galaga style stage before getting into the next set of levels.  Each set of levels introduces some new invader types such as shielded enemies and changes their colour from the basic white of the first stage but the action is always fairly monochromatic which seems more like a lazy stylistic choice from the developer than anything else. 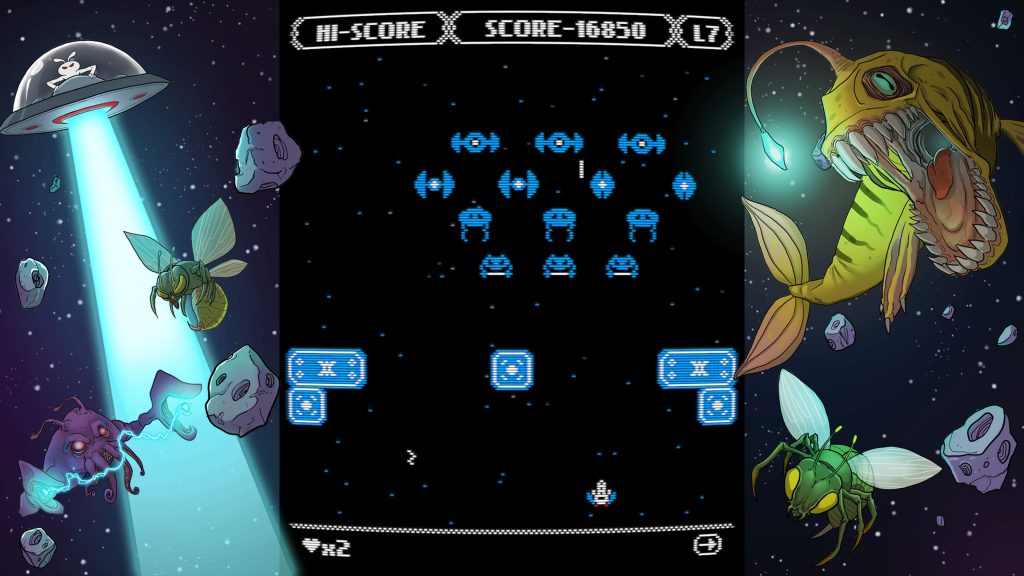 The only thing to report that is of any interest is that the game is quite difficult.  You get infinite continues but restarting will put you back at the start of that selection of levels so dying in a boss battle could put you back three or four stages.  Ah yes, there are boss battles where a big, ugly sprite will bounce around absorbing all of the pitiful amount of firepower you can put out for a few minutes before getting out of your way.  There’s no stage select option though so once you’ve had enough there’s no restarting where you left off.

This is a Ratalaika joint though and so despite the fact that everything after the second level is actually pretty taxing, you’ll have the platinum trophy before you have to do any of that. It’s a cross-buy title also, and while the Vita version adds nothing, it feels a little less insulting playing this game on there rather than on your expensive modern console but that is the faintest of praise. 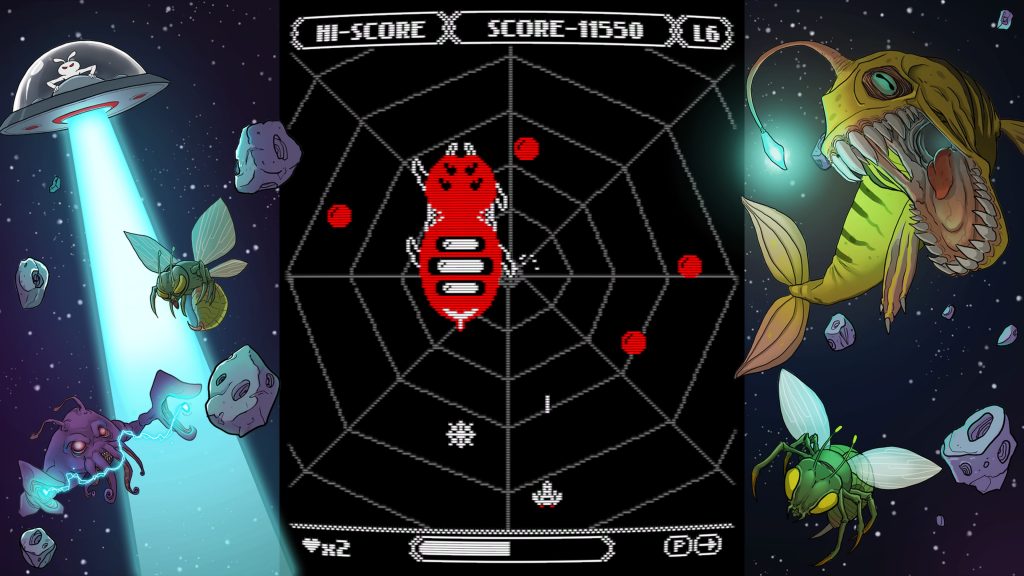 In terms of presentation, the game does a few things right.  Firing up the game, you’ll see a bios screen that looks the same as the ones that arcade games had back in the day and the bezels on the side of the screen, and the scanlines, do give you that authentic ’emulating a classic on MAME’ kind of feel.  The music is your standard chiptune stuff but is okay (despite driving us mad because it took us ages to figure out what it reminded us of: Saboteur 2 on the Spectrum).

There’s not much to say here.  We even took a look at some other reviews just to see if we’re missing the point entirely but while they are somehow pulling out scores of 6/10, we can’t opt into that sort of baffling madness.  This isn’t a good game.  It’s cheap and pisses trophies at you but after an hour you’ll be hitting delete and forgetting about it forever.  We do have a soft spot for Ratalaika sometimes and they are capable of surprising us but this is trash and they pulled this trick before, and better, with Super Destronaut anyway.

Zeroptian Invasion
3 Overall
Pros
+ Authentically retro
+ Cross-buy
+ Functions correctly
+ Challenging
Cons
- The worst Space Invaders game
- Rubbish power ups
- Basic visuals
- Really basic gameplay
- Not fun
Summary
Taito have done great things with the Space Invaders series so copying the original and ignoring the brilliant sequels seems kind of lazy. If you want cheap platinums while looking at something that kind of looks like a MAME rom then this will serve that function but if you want anything approaching a good game then this isn't for you.