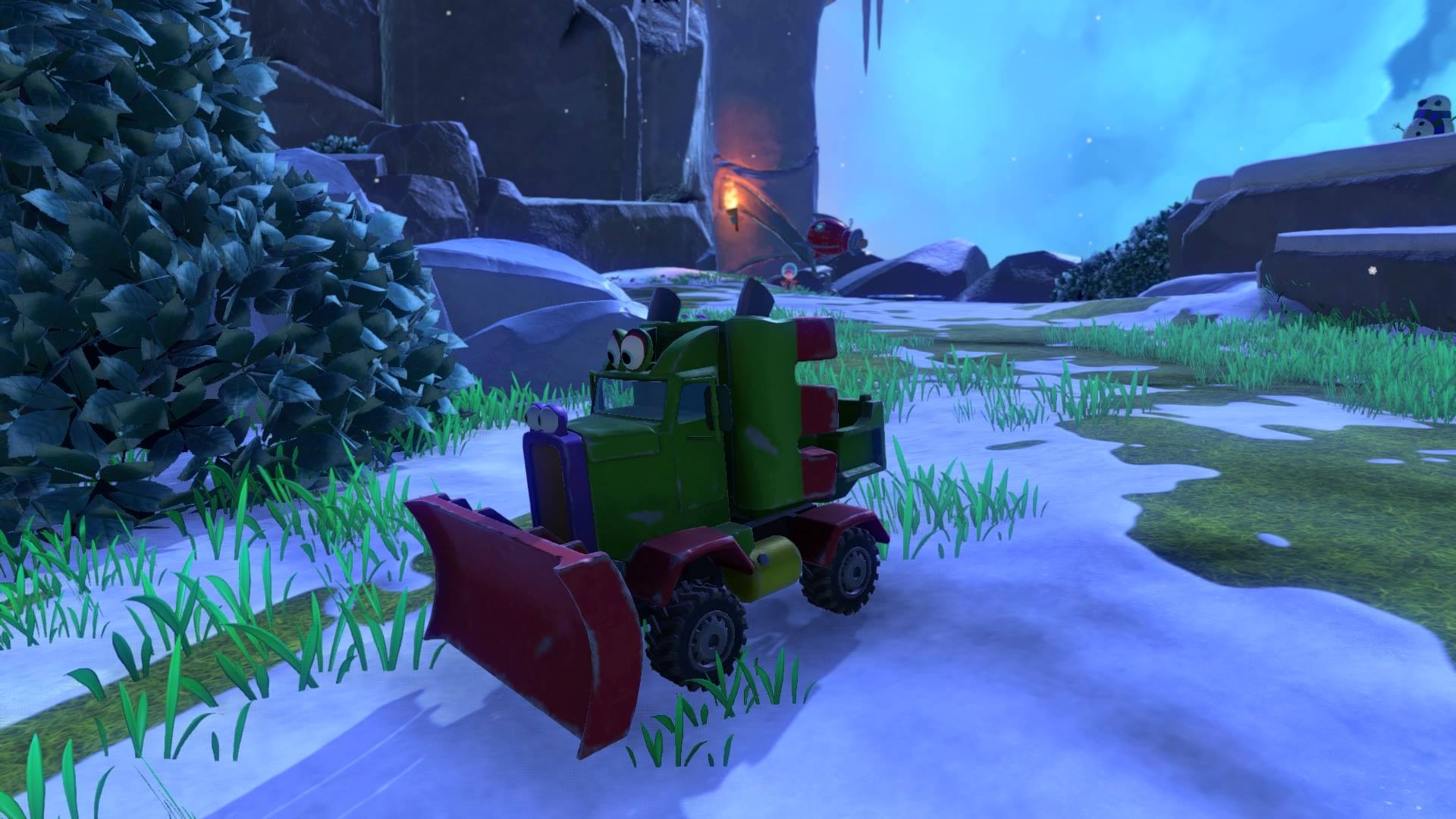 I first knowingly encountered a Rareware title on one fateful summer back in the early nineties. My family had been planning to visit Weymouth beach for a while and we had arrived just in time for the carnival, much to my parent’s chagrin as they were expecting a quiet day in the sun. I was enthralled by the sights and sounds that were all around and while my Dad furiously searched for a parking space I noticed a black obelisk in the distance. This was a monument of oddity that I have since found exceedingly difficult to find any details on. This obelisk was known as the Nintendo Challenger, a double decker sized bus that housed their latest invention, the Nintendo 64.

Once I could sneak away from my lounging parental figures, I immediately went to see what was going on. I hadn’t heard or seen much of the N64 at this point and my gaming days were limited to a hand me down Game Boy or my trusty Sega Mega Drive. Once I set foot on the bus I was of course in heaven. Before me was rows of consoles, all playing a host of the newest and most exciting games, including Goldeneye, Pilotwings and of course Banjo-Kazooie. While you would have expected a boy of my age to go straight for the guns and shooty bangs of Brosnan’s Bond, I found myself enthralled in the colour and magnitude of the Bear and Bird’s first adventure. So much so that I would circle in and out of that bus until the sun dropped so I can get as much of the game as I could in my chubby little grasp. 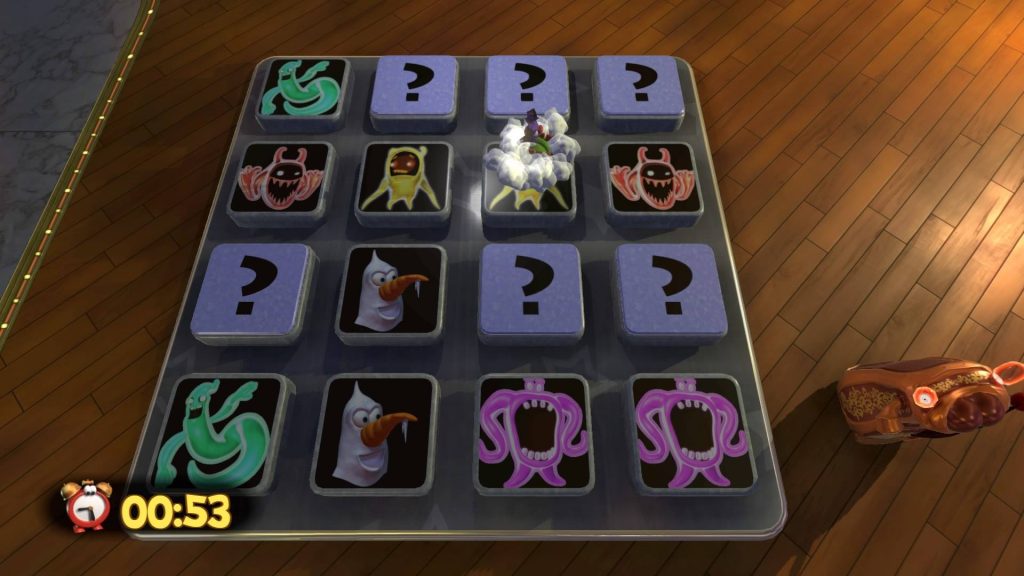 Later that year I had an N64 in my possession, with Banjo-Kazooie being the first game in my polygonal arsenal. I had gone from a diet of 2D platformers and upgraded myself to the third dimension with the hyphenated heroes as my tour guide through this exciting transitional period. It was one of the finest adventures that I had ever laid eyes on, where exploration was key, with the aim to grab every bouncing, eyeball toting collectable in sight. All in the name of defeating an evil witch. For the time, the size of the worlds were gigantic. Plenty of puzzles and challenges littered the landscape and along for the ride was my mum. Who I can tell you is one of the worst/best backseat gamers in existence. She cheered when I succeeded and scolded me when I failed at the same objective time and time again (here’s looking at you Rusty Bucket Bay engine room puzzle.) This was a ritual we had going from the opening melody of Treasure Trove Cove to the final breath of Gruntilda the witch.

Such a fond memory has been difficult to overcome in my gaming life since. Many 3D platformers came and went until they suddenly fell silent. It was clear at one point that there was never going to be another game that would match the wit and charm of the Bear and Bird on N64. It pretty much seemed that after platformers had tried to shoehorn guns into the action that the genre was pretty much doomed to obscurity. This was up until 2015, when Yooka-Laylee first appeared in the form of a Kickstarter project, a project that was set up to be completed by the folks that made Banjo-Kazooie possible in the first place. Of course, I was very excited by the proposition, the Banjo franchise was dormant and nobody else was willing to risk a platforming game shaped bomb. Only time would tell whether this bold move by Playtonic would pay off and it’s finally here. 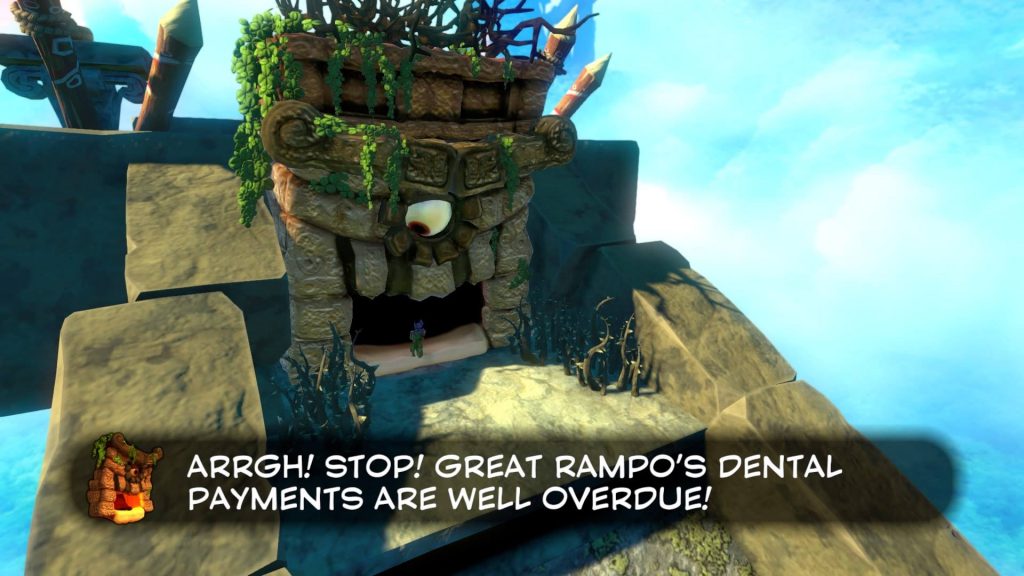 Yooka-Laylee’s story is a simple affair. You take control of the titular lizard and bat duo as they go in search a magical book which has been stolen by the antagonistic Capital B, a literal Bee who wishes to convert the power of the book into pure profit.  The buddy dynamic of Banjo is very present here, with Yooka and Laylee both combining their animalistic traits for mutual gain. The moveset is basic at first but expands as you venture through the various worlds when they meet with a character called Trowsa, a snake that deals in special moves in exchange for collectable quills. These special moves cover the basics, such as your typical ground pound and high jump, but they also expand to the more interesting elemental powers which allow you to eat up fire or water plants to spit projectiles at foes and puzzles.

What Yooka-Laylee loses from the Banjo-Kazooie days is the quantity of worlds on offer. With only five levels in total plus the hub, it can seem that this is a somewhat meagre amount of content to be offered after the expansive games that the team have provided before. To combat this, each level can be expanded with the use of Pagies that are collected throughout each stage. This not only makes the world bigger but also places in more challenges for you to tackle. For instance, if you expand Tribalstack Tropics (first world) then you will find an entirely new area which features a neat boss battle and other puzzles to battle through. Level expansions can be initiated at any time during your adventure, so If you prefer a change of scenery you can head to another stage before opening an old one to keep things fresh. 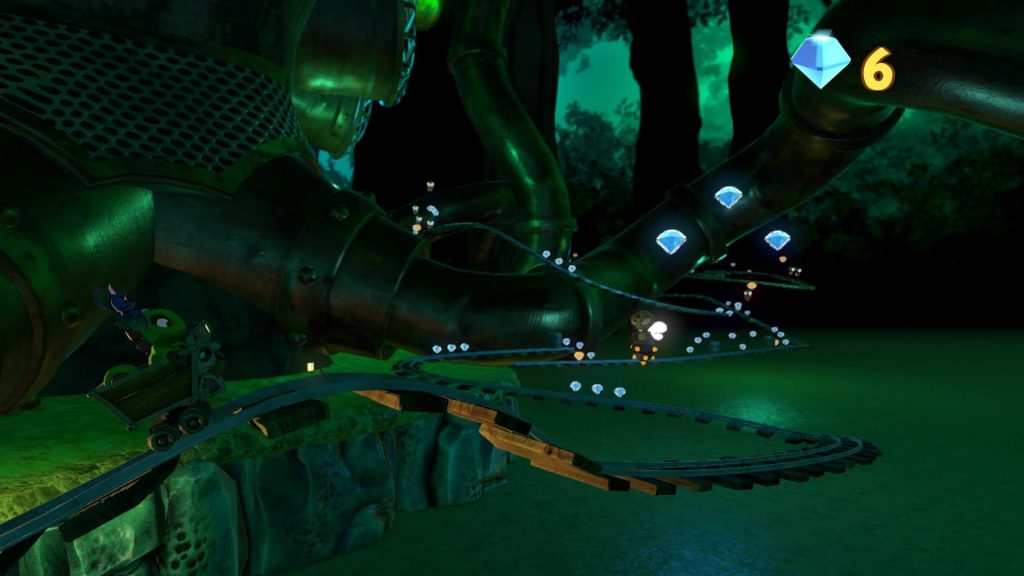 This gave the option for a bit of freeform progression which I appreciated greatly. The system allowed me to take a breather from one world and head to the next, but also gave me incentive to come back to older worlds when I got stuck later. In addition to this, older worlds benefit from moves learned later in the game with some areas being inaccessible without certain attacks or movement abilities. Due to the lesser number of worlds to discover there is a bit of homogenisation that takes place in each. For example, one of the later levels takes place in a marsh which also incorporates a haunted house style theme, later yet is a space inspired level which also incorporates a pirate undertone. It is clear why this has been done, this is so as not to make people feel like they are stepping through the tropes of grass, water, lava, ice levels in order like they have done in years past, at least not too rigidly.

Each level is of course part of the larger hub world which is represented by the domain of Capital B, Hivory Towers. This is very similar in style that of Gruntilda’s lair from Banjo-Kazooie and gives the villain opportunity to sneer at you from a distance while you make your way through the sprawling labyrinth. Dotted among the towers are the same number of collectables and puzzles for you to partake in, but with the addition of the odd quiz, provided by Dr. Quack, Capital B’s right hand…duck. These quizzes consist of ten multiple choice questions that consist of what you have seen so far in the game so you need to pay attention as some questions can be quite tricky, such as asking which colour ghost writer you found first or how many quills you have found so far. These are designed specifically to stall progress along your way, as explained through a joke, but they can be a right pain to get past at times, thankfully there aren’t many of these. 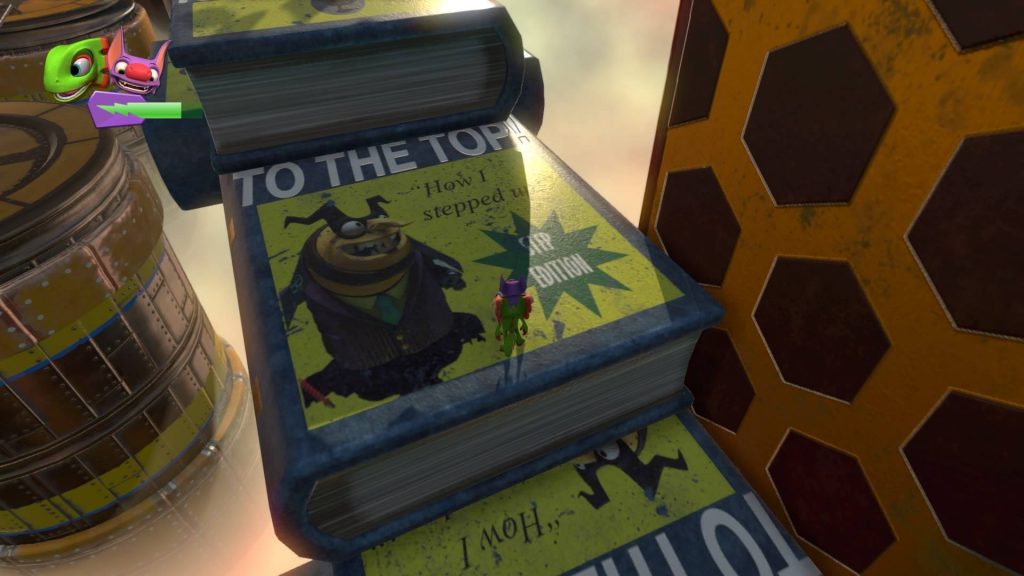 If the scientist duck with his head in a jar and the the literal trouser snake didn’t tip you off then it should still be clear that Yooka-Laylee doesn’t take itself seriously. Every line is played for laughs with varying degrees of success. Dialogue from Capital B during your adventures in Hivory towers may not hit the same rhyming quirk of Gruntilda but other characters like Trowsa and Laylee wreak of the wit and charm that Rareware piled into their previous games. There are a tonne of nods to these games and more throughout the dialogue and the characters break the fourth wall constantly which contributed greatly to the smile on my face throughout my playthrough.

What truly brought Yooka-Laylee into enjoyment territory was the music throughout the game. Grant Kirkhope and David Wise have teamed up to create the soundtrack for Yooka-Laylee, using just about every trick they have learned from their many years in the business. From the opening notes of Tribalstack tropics to the sublime themes of Hivory Towers they have completely nailed the grandiose and cartoon inspired soundscapes that made Banjo-Kazooie and Donkey Kong Country classics. Along with this, the varying soundscapes of each level has made a return from the Banjo days which changes depending on which part of a level you are in. Also, back are the gibbering voice clips that were previously the fault of N64 limitations, they return here for nostalgia’s sake but still hold up well despite the simplicity in concept, it adds personality to lesser characters such as Pagies and raises a smile when you hear the more fleshed out personalities like Trowsa or Capital B.

As with any retro styled platformer, Yooka-Laylee can be a bit of a warts and all scenario. When returning to the likes of the 3D platformer there is always going to be the bugbear of the nefarious camera controls to worry about and Yooka-Laylee is indeed another sufferer. There were odd times where I was trying to combat foes or using the later flying technique where the camera just didn’t know where to look. Also, it would get stuck on certain pieces of scenery in more compact environments. For the most part however I had applied my previous experience of the 3D platforming genre and excused this. But this will be an issue for some. Luckily Playtonic have pledged to eradicate these issues in an upcoming patch, so that should improve things soon.

Otherwise, Yooka-Laylee is a great call back to the glory days of old and a suitable tribute to one of gaming’s most accomplished platforming titles. If you were ever a fan of Banjo-Kazooie then you owe it to yourself to give this a try at some point, at very least to keep the 3D platforming flame burning.

Yooka-Laylee
8 Overall
Pros
+ Captures the look and feel of a classic Rareware platformer + Full of tongue in cheek humour that raised a lot of smiles during my playthrough + Does exactly what Playtonic set out to do with the Kickstarter + Brilliant, nostalgia infused soundtrack
Cons
- The camera can get in the way sometimes, particularly when in flight or during combat - More world variation would have been nice - Not quite as iconic as Banjo-Kazzoie overall
Summary
Yooka-Laylee is a fun retro styled 3D platformer with the buckets of wit and charm that made Rareware games so much fun to play, but along for the ride is a somewhat combative camera system that occasionally gets in the way. If you can overcome this then Yooka-Laylee is an excellent trip down memory lane for fans of Banjo-Kazooie and similar titles.