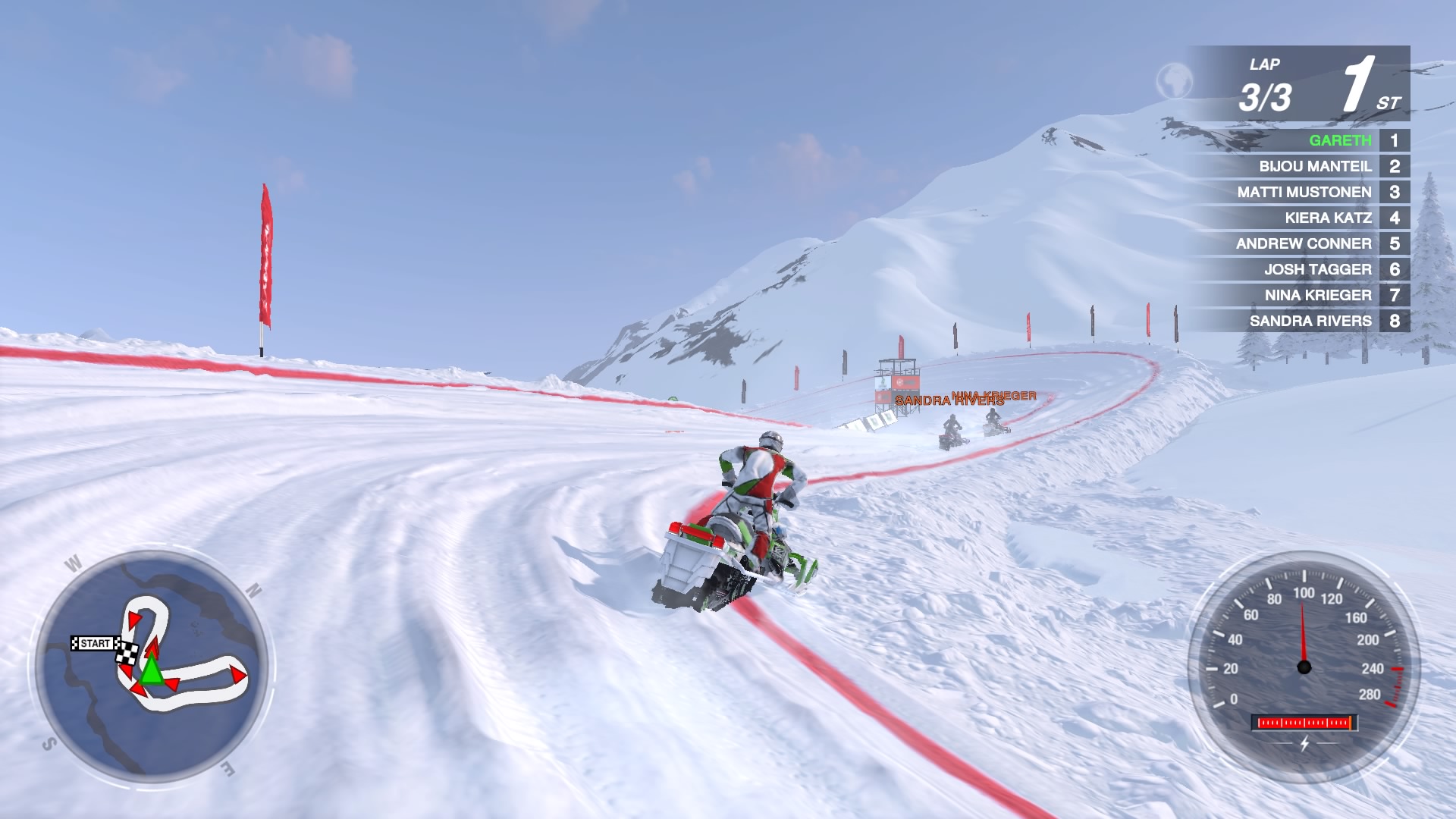 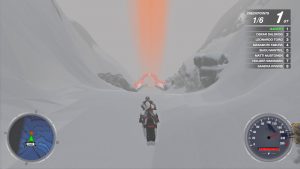 Looking at the title might remind you of a game I reviewed about four months ago called Aqua Moto Racing Utopia. It should as this is the same developer, Zordix AB, but this time they’ve turned down the temperature and you race on snow. Aqua had a lot of potential which it didn’t quite fulfil so can this change of scenery make the difference?

The setup is incredibly similar here. You start by making a racer that can be male or female, choose their nationality and then choose the colours of their outfit. You had more options in the last game but it ultimately doesn’t matter to the gameplay.

You are then greeted with a menu and although familiar again it seems cut back a little from the last game, less pleasing to the eye and ear. There’s also no tutorial where there was one before. It doesn’t take much to grasp the controls but an introduction to the game types would have been nice.

There are three types of championships spread over three locations and these form the majority of your single player experience. You have Sprint League, Snocross and Freedom League. Each has eight championships within which contain between three and five races each. You get points depending on your finishing position and if you have more points than everyone else at the end then you win.

Sprint League gives you a large open map with checkpoints littered around. You have to hit these in a specific order but the idea is that you aren’t restricted by a track, you can either go to the left, right or through the middle of that group of trees, you can take the shorter route up the steep incline or go around to a smoother ascent. Snocross is track based. There will be ramps, bumps and bends to contend with, generally across three laps. Freedom League contains tracks from the other two. 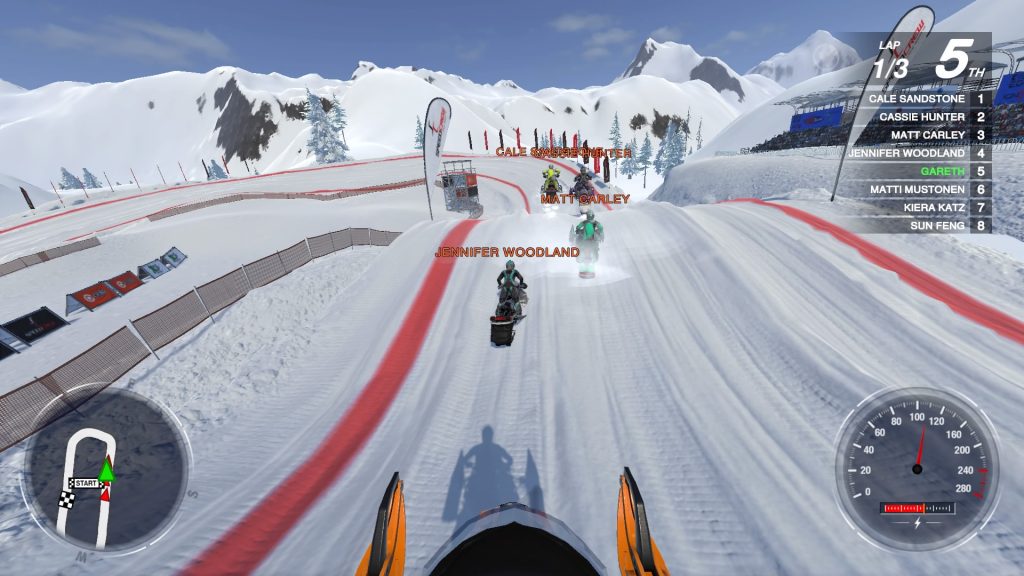 Gone is the trick based championship from the last game, though I’m not sure many people will miss competing for points against invisible AI. Tricks are still featured in the game however. Your basic gameplay consists of accelerating your snow mobile, tapping the brakes to take tighter turns, using your boost for increased speed and performing both air and ground based stunts. Your boost accumulates naturally over time and getting a perfect start (accelerating on ‘GO’) gets you a full gauge straight away, but stunts net you more again.

There are limited opportunities for air based tricks in the Sprint Leagues, ramps being more common in the Snocross levels, though as with the last game I found catching air negatively impacted my race so was ultimately not worth it. Also similar to the last game is the fact that although there is a definite change of speed when activating the boost it doesn’t necessarily translate into outpacing the AI which can make it feel pointless. As with the last game I found that I had to race as well as I could without the gimmicks. The welcome feature of being able to retry any race mid-championship without punishment also returns making it easy to keep trying until you perfect an event.

It shouldn’t take you more than five or so hours to play through all the championships, with later ones unlocking as you progress. Beyond that is a single race mode where you can choose the type of event, track and weather. As well as the events from the championship modes you also get a trick attack where you have ninety seconds to score as much as you can by performing a wide range of tricks and Leisure mode. Leisure mode in the last game had collectibles strewn out that made a weird thing happen once you got them all but here you can go to the three different locations (Scandinavia, Rocky Mountains, The Alps) and get a huge ‘open world’ type area, but I couldn’t fathom why. I could have missed it but I was driving around for ages and didn’t spot anything. At all.

There’s also the four player local multiplayer and the online multiplayer though I couldn’t test it prior to release. I struggled for a game on Aqua Moto Racing Utopia after release so I wouldn’t hold my breath. 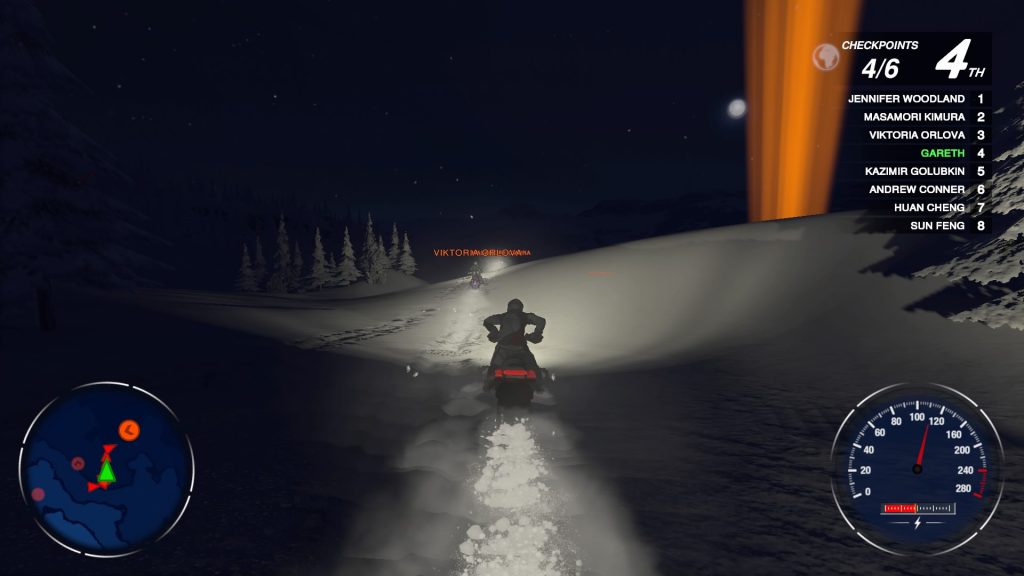 Ultimately though this feels like a back step. Aqua Moto Racing Utopia didn’t quite nail the arcade feel but it got very close, there were hints of it, it was just a little tame and wasn’t pushed far enough to make it truly memorable. Snow Moto Racing Freedom loses a lot of that feel. Sure the controls are still loose enough to be considered ‘arcadey’ but the rather attractive water effects and blue skies have been replaced with white snow as far as the eye can see. The pick ups littered around the tracks have vanished. The music is just some generic rock that despite playing the game for the past six hours I can’t remember a note of.

Add to that what I would consider bugs, like poor collision detection knocking me off my vehicle, respawns putting you back wherever your vehicle ends up rather than on the right track and inconsistent track boundaries sometimes letting you take liberties and other times not letting you even put one toe off the track and I found it a more frustrating experience than I was expecting. The lack of camera pans before a race or your character standing on a podium after a championship win which were present in the last game also detracts from the presentation.

The biggest problem though is that it’s just a bit boring. Whether it was the weaving between buoys, the variety in the locales and water physics or that racing on water is just more exciting than racing on snow, Snow Moto Racing Freedom feels like the game that should have come before Aqua Moto Racing Utopia, not after. Everywhere is covered in snow so it all looks the same and zig-zagging across a large open expanse to hit checkpoints on the other side of the map isn’t as exciting and dynamic as I believe it was meant to be. The Snocross events are better but the controls are just loose enough (I know, you’re driving on snow) to take some of the fun out of it. 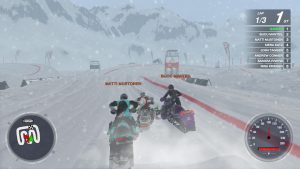 If you’re a fan of Zordix AB’s previous game then you may gain something from this. If you’re looking for a snow mobile based racing game then you’re not exactly spoiled for choice, but whether it’s Air Moto Racing Heaven or Space Moto Racing Universe that comes next I hope they get it right. This was a slight misstep but the building blocks are there for a quality arcade racer, but the tracks need to be distinct, memorable and fun to race upon.

Snow Moto Racing Freedom
5 Overall
Pros
+ A decent amount of content + Retry ability is still welcome + Four player local multiplayer
Cons
- A bit dull - Every location looks the same - A back step from Aqua Moto Racing Utopia
Summary
Snow Moto Racing Freedom offers a decent snow based arcade racer. There's a good amount of content, local multiplayer for up to four people as well as online multiplayer. Unfortunately it lacks polish, the snow covered tracks all look the same and the racing isn't exciting enough to make up for it.