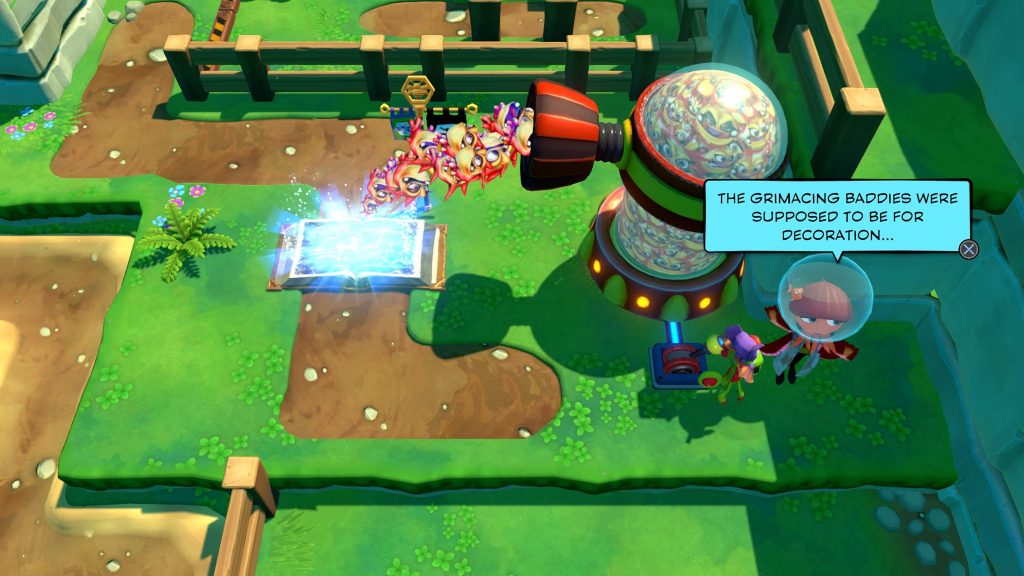 Back in 2012 when the original Yooka-Laylee was announced via Kickstarter, there was a humongous amount of excitement. With this game, Playtonic Games signalled in what could have been the new era of N64 style platformer titles, a genre that many of the developers made famous, thanks to their collective creation of games like Banjo-Kazooie, Conkers Bad Fur Day, Donkey Kong 64 and others. It’s fair to say, that while I personally enjoyed the game, many had shortcomings with the approach that Playtonic took. Yooka-Laylee was very much a ‘warts and all’ scenario. Mixing in challenging, fun platforming with camera issues and not as many fresh ideas as we would have hoped.

It’s now been two years since the original Yooka-Laylee game hit digital stores, With the help of Team 17 on publishing duty, Playtonic have returned with a slightly different take for the Chameleon-Bat duo. This time, instead of acting as a pseudo homage to the 3D platforming hey-day, Playtonic have opted to go even further back into the experience of their talent pool and have created an almost shot-for-shot tribute to the Donkey Kong Country series.  Of course, this is completely warranted; the challenging and heavy platforming of Donkey and Diddy is not a style that is aped (sorry) often. Despite the series being beloved among retro fans, it is one of a style that has predominantly been only seen on Nintendo platforms. The problem with homages and spiritual successors is that while they often scratch an itch for those wanting more from classic adventures,  it can often be the case that games that lean too heavily on the referential side of things can have difficulty in finding their own individual voice or merit. 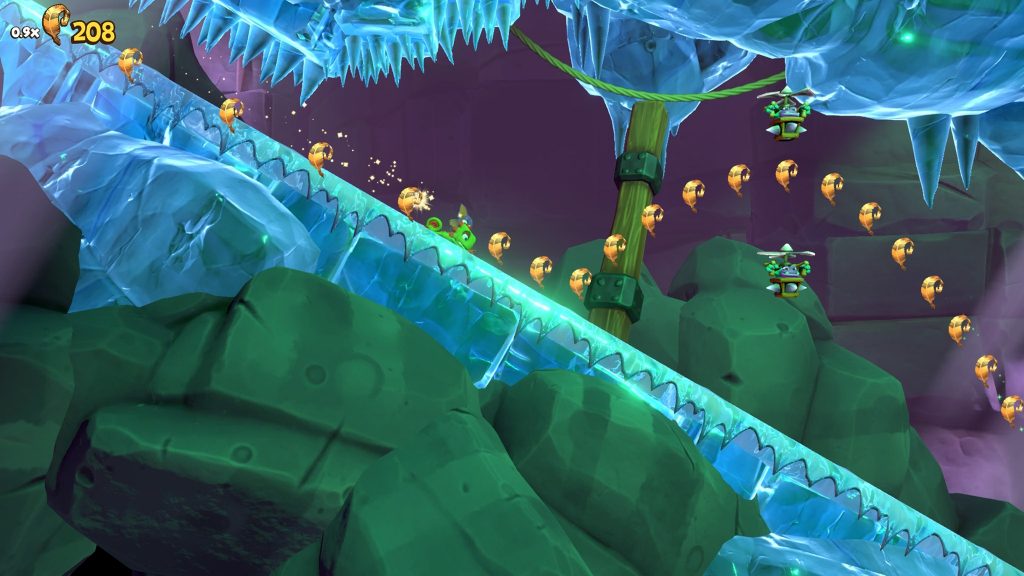 The elements of tribute are clear with Yooka-Laylee: The Impossible Lair from the word go. The player begins in the title location, fighting against Capital Bee, the corrupt and villainous Apis that wishes to enslave the world in the name of profit. Instead of the previous game’s 3D platforming, Yooka and Laylee are controlled on a 2.5D plane, with movement that is uncannily reminiscent of the SNES classic titles. The duo’s moves are stripped back considerably from the previous, with all of the button combo heavy tricks reduced down to sideways rolling, jumping and the ground-pounding buddy bash, the only difference being is that when the player takes a hit, Laylee will fly around in a random stupor, offering a way to recover from an otherwise instant death, albeit one that can be a bit annoying. Capping off this retro baiting combination is even the music of David Wise, the composer of many Rareware titles, including the aforementioned Gorilla game.

However, Yooka-Laylee and the Impossible Lair is not simply a carbon copy of what has come before. Central to the core concept as referenced in the title is the Impossible Lair itself. Within this is a novel idea, an extremely challenging stage that can be tackled at any stage in the adventure by those that are either skilled or extremely foolhardy enough to try it. As the name suggests, the Impossible Lair is a bit difficult, relying on quick reflexes and platforming dexterity to overcome the many pixel-perfect obstacles that are laid out in the pathway. The rest of the game then is designed for players to make the Lair easier to progress through, this is achieved by rescuing an army of bees known as the Beetalion, who aid Yooka-Laylee as a shield that diminishes when they either take a hit or fall down one of the many death pits. 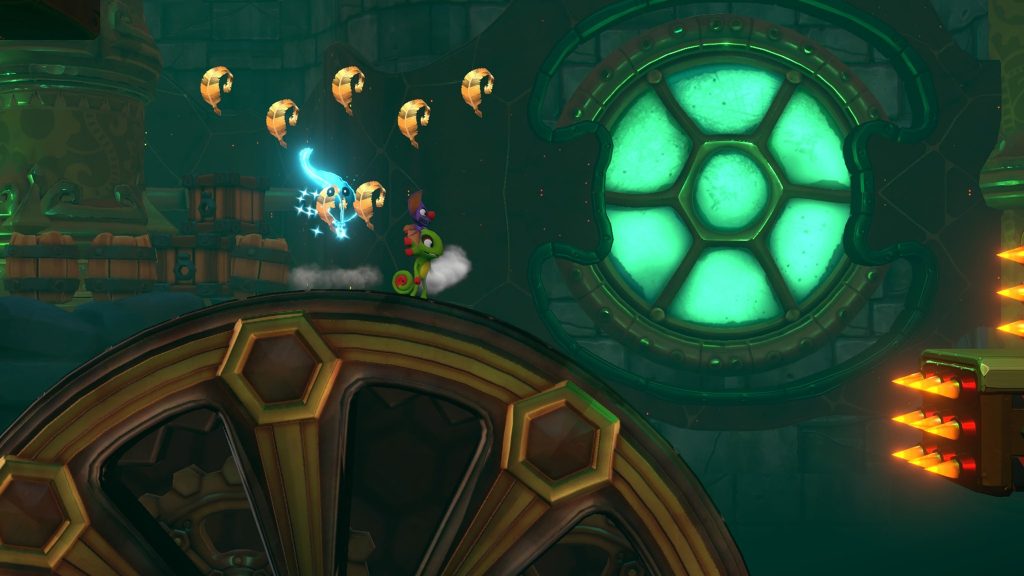 Flanking the content of the Impossible Lair is essentially a two-pronged approach to the typical 2D platforming story structure. You of course get your main levels, with varying level themes and tricky obstacle navigation. In the mix is a novel Birds-eye perspective overworld that offers a range of challenges and exploration of its own. This is another unique approach that breaks up the typical linear structure of platforming games, offering puzzles to dissect, secret paths and additional collectables to assist the player in completion of the 2D stages. These come in the form of the tonics that appeared in the first Yooka-Laylee. These can alter certain abilities for our hero’s, make collectables easier to reach or can change graphics filters to switch up the look of certain levels.

Another way in which players can earn a few more Beetalion shield charges and collectables is through a level-altering mechanic which is dictated by certain items in the overworld. Occasionally Yooka and Laylee encounter elemental bomb plants that can freeze or heat up stages by spitting them into the world. Other ways you can do this is through enemy vending machines that add extra creatures in. This is a pretty neat way that Playtonic have bred into the game to reuse world assets without making things too samey as an overall experience. This may seem like a cop-out on paper, however, the changes in the worlds mix things up nicely and these do give more opportunities to earn more shield charges and currency to open up the aptly named Paywalls that are run by Yooka-Laylee’s resident entrepenuer Trowza, the brilliantly named Snake in a pair of trousers. 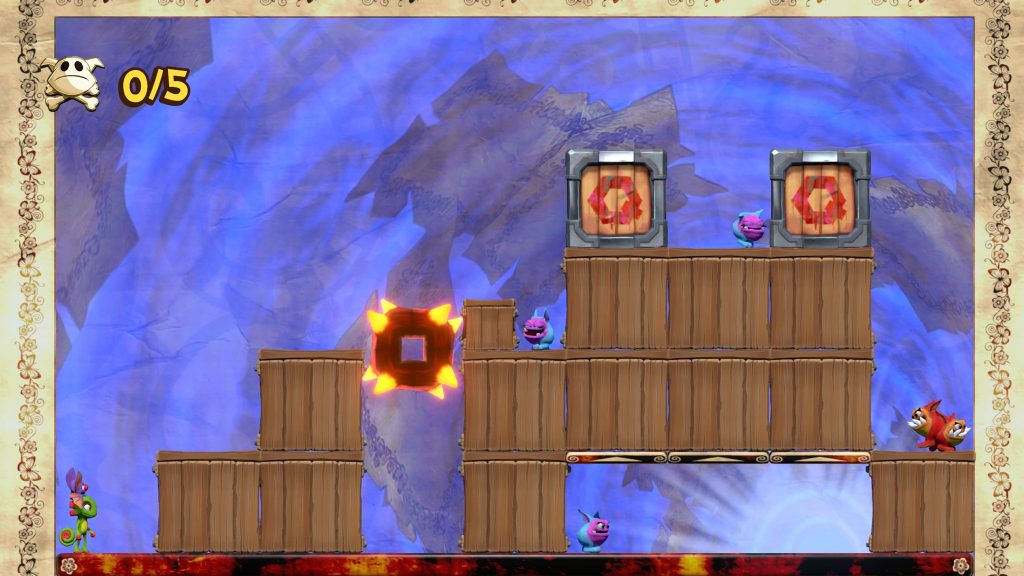 With these tonics, Beetalion shields and the many other aspects of the game, it all comes together nicely to empower the player throughout the many challenging landscapes that get in the way. It offers a difficulty reduction for players struggling with certain levels, or a means in which to challenge players who prefer it. That’s the aim of the game really, Playtonic have been incredibly clever with their approach to Yooka-Laylee and the Impossible Lair. That added player engagement to tailor the challenge is something that I am sure that people will love. From the SNES playing dads who do not have as much time on their hands anymore to the speedrunners who like their games as challenging with as little fun as possible. I am sure that there will be players out there that will clear the Impossible Lair without the aid of the Beetalion shield soon and the fact that such a thing is possible is a neat idea and one that should be appreciated by many.

All of these great ideas would be nothing without a good cast of characters, gameplay fundamentals or presentation to go with it. Thankfully, Playtonic have showed their prowess once again with the design of this game. It feels like a truer return to form than even the first title in terms of that Rareware quality, with a better grasp of what made older Rareware titles so great in the first place. The unabated quirk of the Yooka-Laylee cast is well represented, with characters like Trowza making a triumphant comeback. The presentation and soundtrack is top notch for the production size also, with David Wise’s trademark instrumentation making a particularly strong impression. It all blends together in a suitably complimentary fashion, feeling like more of a complete package as opposed to the previous game.

Yooka-Laylee and the Impossible Lair is an unexpectedly surprising and very welcome addition to the side scrolling platformer genre. What could have been a formulaic, trope-filled throwback has been bolstered with creative and unique ideas that gel together brilliantly. This is definitely one to try if you have had a Kong shaped itch for the past couple of decades.

Yooka-Laylee and the Impossible Lair
8 Overall
Pros
+ Vibrant visuals with a variety of level types
+ Interesting mix of 2D and 3D gameplay styles
+ ‘Alternate state’ levels offer a clever twist
+ Trowza is still an inspired character
Cons
- Can often feel derivative
- The humour is groan inducing at the best of times
- Laylee's habit of freaking out on-hit can be downright annoying
Summary
Playtonic Games attempt to catch a second flash of retro magic in a bottle with Yooka-Laylee and The Impossible Lair. The 2.5D action may seem like a step back considering the origins of the Chamelon-Bat duo, but at the heart of the Impossible Lair is a distinct thread of innovation, a rare feat for the often-attempted platforming genre.

2 thoughts on “Yooka-Laylee and the Impossible Lair – PS4 Review”