Trine 4 then. Hmm, where to start? It’s from Helsinki-based developer Frozenbyte by way of publisher Nobilis for a start. And we’ve had it for two weeks before release. We were dimly aware of the first couple of games, even having bought the second on the 360 but never having actually played it. It didn’t help that we kept getting it confused with a text RPG maker called Twine either. Either way, 2015’s Trine 3 passed us by altogether.

The couple of weeks we had to play this gave us plenty of time to savour Trine 4: The Nightmare Prince in full. We say in full, but we actually mean squizzing through the storyline without getting too wrapped up with collectibles. Long term gamers will remember Interplay’s Lost Vikings games. This is similar in that you use the respective strengths of your individual party members to negotiate various puzzle platforming levels. Each of your party members is introduced in turn by way of a tutorial level of sorts. Unlike the likes of say, Assassin’s Creed 2, you don’t feel like it’s a huge chore though. 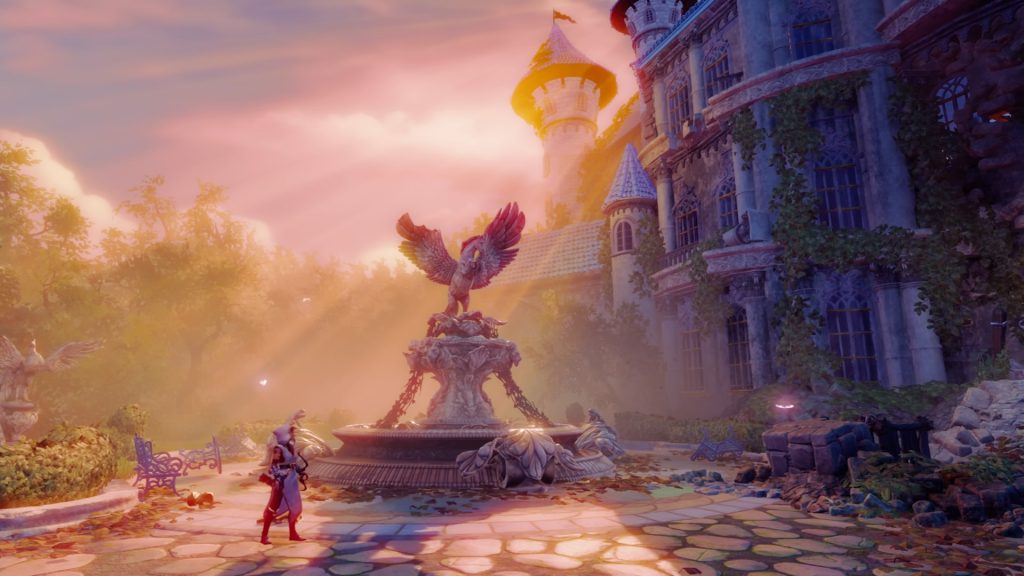 Firstly, there’s Amadeus the wizard who can magically manipulate items in the landscape as well as conjure up objects to aid your traversal. His moveset is initially limited to a single box but soon expands to poles and spheres. He’s best left in a support role as when you encounter the nightmares given form in short battles you’ll quickly come unstuck otherwise. Eventually he’ll gain a very useful short range blink ability not unlike that found in Dishonored, only with less rats. Ooh, rock me Amadeus.

Next up is thief Zoya who can fire ropes at conjured objects and fixed rings in the landscape. Her ability to fix a rope between two objects comes in very handy when reaching otherwise out of place items and unreachable platforms. Add elemental powers to the equation the further you progress, and you have a very capable member of your group. 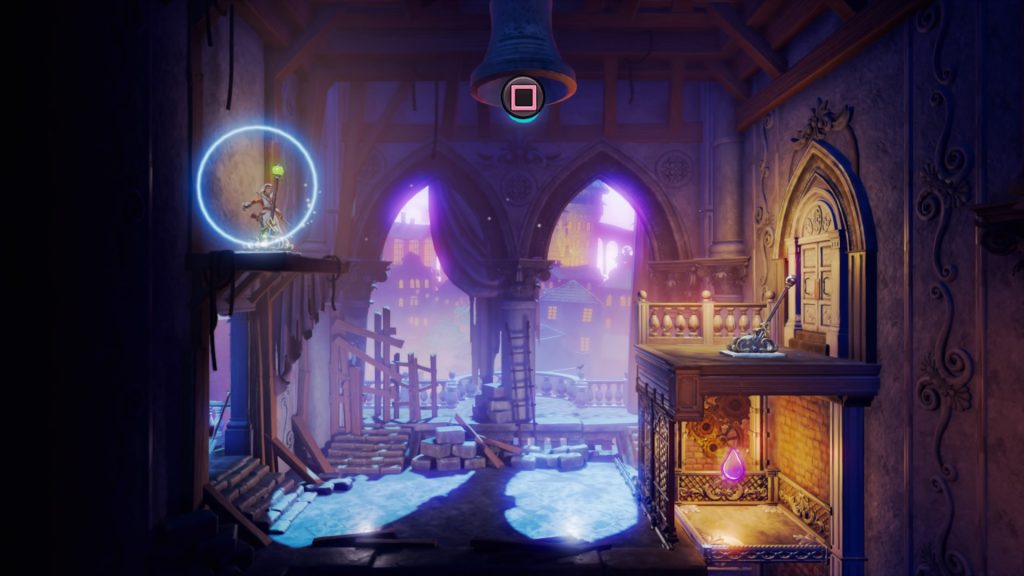 Finally, you have Pontius the portly knight. He’s your go to guy when it comes to the generally short battles. His attacks usually make short work of the apparitions given flesh you’ll encounter. In addition, his charge attack is great for busting through fragile walls that impede your progress. He can deflect items via his shield, plus use it as a parachute somewhat oddly. Admittedly it’s a magic shield which helps, but there’s not many odder sights than a fat knight gliding gracefully across a chasm.

Your quest is to get to the bottom of what ails the titular nightmare prince, besides the obvious nightmares at least. Across multiple levels spread over five acts you’ll unravel the mystery behind the frankly spoiled prince. He’s not that likeable to start with so thankfully the levels you traverse are reason enough to see the quest out. The fact his nightmares are part of the problem bring to mind classic SNES game Secret of Mana in terms of that Dyluck in that being manipulated by the evil Thanatos. Things pan out similarly here if we’re honest and the storyline could almost be accused of being a little on the tepid side and not massively original. 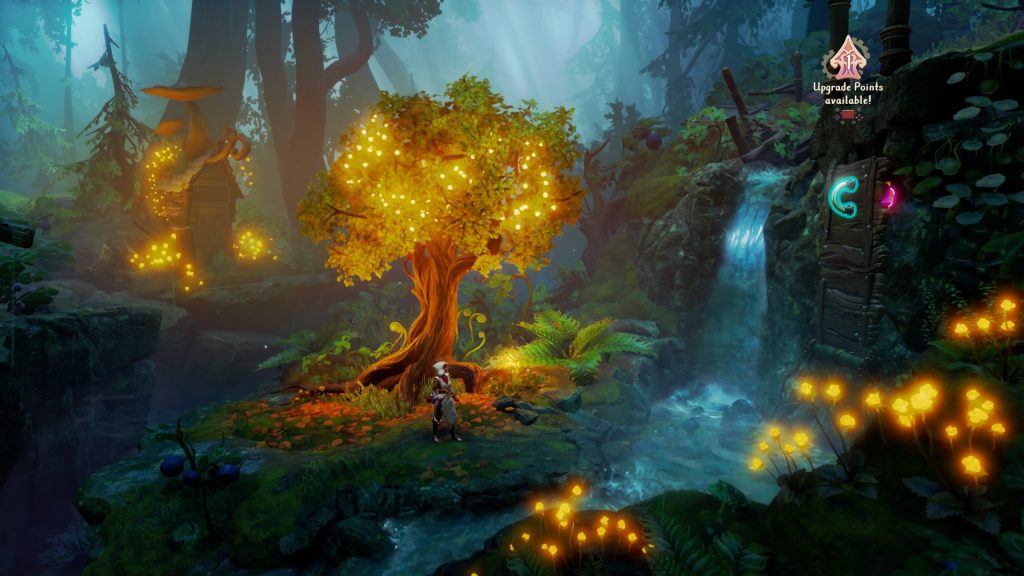 Together with getting to the bottom of the prince’s nightmares, you’ll encounter the neuroses and fears of Amadeus, Zoya and Pontius respectively, with a boss encounter for each that uses the powers at your disposal accordingly. Given you’ll be facing the fear of each in turn, you won’t be able to switch characters during these encounters. You face them at a point in your adventure where you’ll have unlocked the bulk of their respective skillsets so you’re well equipped to see them off.

, with any special abilities mapped to

. Along with controls mapped to the face buttons this makes for a fluid experience.

Some puzzles seem a little obtuse at first, but once you actually think about the tools at your disposal you’ll manage to prevail. Helpfully, if you are taking a long time on a particular solution, the game hints that combining the powers of Zoya and Amadeus might be a good approach. It’s a nice subtle in-game hint system. Although on several occasions we tried intricate solutions only for the successful method to be painfully obvious and blindingly simple. Very much a case of not seeing the wood for the trees! 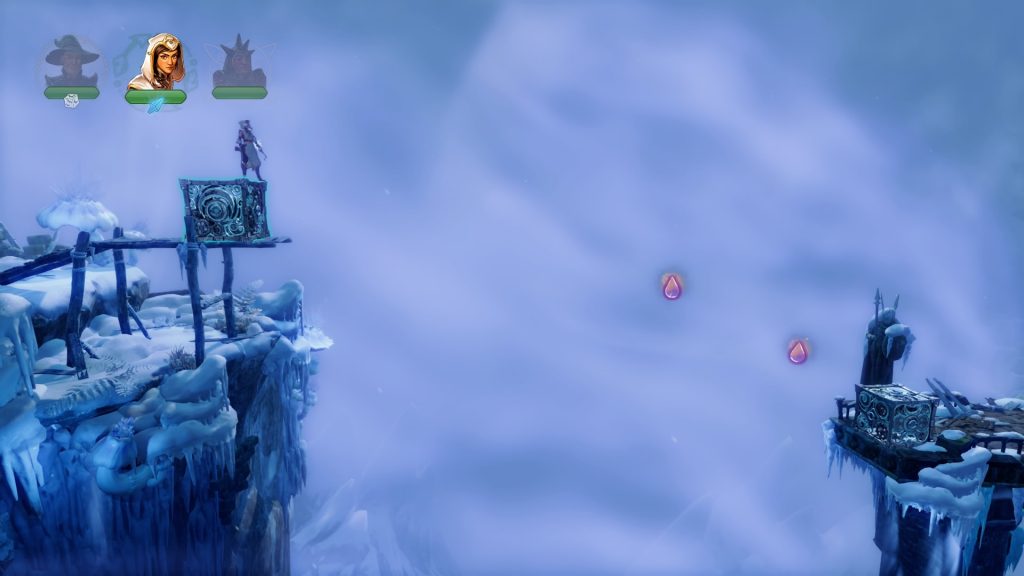 Each level has a number of experience orbs to collect as well as other artifacts. The map screen gives you a handy breakdown of your progress during each checkpoint through the level so you can go back and mop up the collectibles as you see fit. In our case, barring a few early levels we still have loads left to do. We’re definitely going back to replay though as half the fun here is finding your way through the environmental puzzles and going off the beaten track.

As is probably obvious from the screenshots here, Trine 4 is beautiful with a wealth of gorgeously realised levels. Even the normally bland snow levels come away looking gorgeous due to the wealth of environmental effects in evidence. 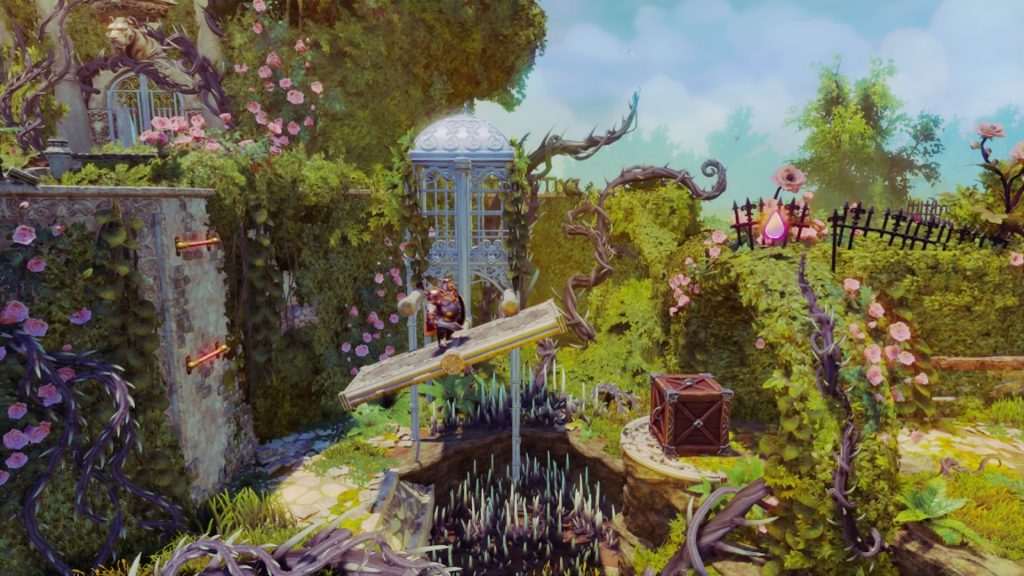 Similar games of this ilk often get bogged down in fussy puzzle solving but Trine 4 never really falls into that trap thankfully. As we mentioned earlier you almost end up overthinking some puzzles with the solution being far simpler than you’d expect, certainly in the latter stages.

Voice acting and music are generally excellent but we get the odd sound stutter, perhaps our long in the tooth base PS4 is the issue though. The interaction between the characters is often amusing and characterisation is good with it.

In conclusion, Trine 4: The Nightmare Prince is a worthy puzzle platformer and well worth shelling out for. There’s a bundle available at retail of all four Trine games including this, we’d recommend you go for that if you spot it at the right price. We’re actually so impressed with this that we’re actually going to play Trine 2 at some point too.

Trine 4: The Nightmare Prince
9 Overall
Pros
+ Great fluid controls
+ Beautifully designed levels with good puzzles
+ Excellent meshing of the three characters
+ Collectibles not a chore at all
+ Gorgeous lighting and effects
Cons
- Storyline perhaps a little generic
- You almost end up overwhelmed in terms of choice when solving puzzles
- Collectibles can almost be a little too engrossing
- Sound stuttering issues on base level PS4
Summary
An excellent puzzle platformer with great level design and stunningly realised concept. Recommended.