Hungarian dev squad Neocore aren’t exactly strangers to the ARPG (action role-playing game) and have already put out a bunch of them as part of their Van Helsing series.  Warhammer 40,000: Inquisitor – Martyr  is their latest effort and, for a reviewer like me at least, the good news is that there are a few levels to the game.

As someone who doesn’t know anything about the lore of Warhammer (chill out, our Warhammer guy’s gone to Germany for a few weeks and sometimes you review things that you normally wouldn’t) playing an ARPG based on that particular property is a bit sketchy.  But the first level that the game works on is just as a Diablo-with-guns kind of affair.  However, if you are deep into the whole Warhammer thing, you’ll be well-catered for.  Finally, if you like really complex RPGs with loads of complicated systems going on, you’ll get plenty of that here too.

When you fire the game up you’ll be treated to a decent cutscene which sets up the story.  You play as an Inquisitor, a futuristic angry priest who is hunting for cultists and heathens.  After crashing onto a spaceship, the Martyr, you’ll soon find out that it’s not as abandoned as it first looks and from that point you’ll be trying to figure out why it’s there and who stole it.  You’ll travel to various systems, visiting different planets and carrying out campaign and side missions each of which are set on randomly generated levels. 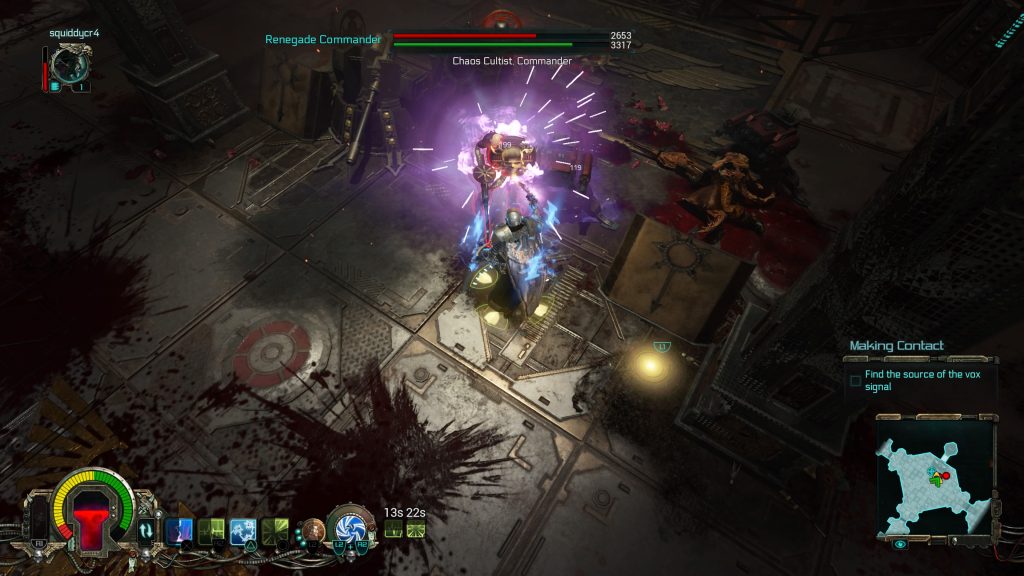 The plot is long, winding and fully voice-acted and clearly has had a lot of work put in to it and the devs are promising a couple of years of free content to keep the game updated so this isn’t just your typical action game.  As such, you’ll be taking in a lot of information as you carry out your inquisition/purge (delete as applicable).

The gameplay also has a lot going on.  You start off by picking a class.  Crusaders are your gun-toting tank types, Assassins are stealth-focused and Psykers use energy attacks.  From there each class has three sub-classes with different weapons and tactics.  However, these are just starting builds and you can progress them as you play the game to take on different functions within their main class but for example your Assassin can be set up for close combat, mid-ranged gunfighting or sneaky sniping.  Psykers have a bunch of configurable spells to deal with too to further complicate that class. 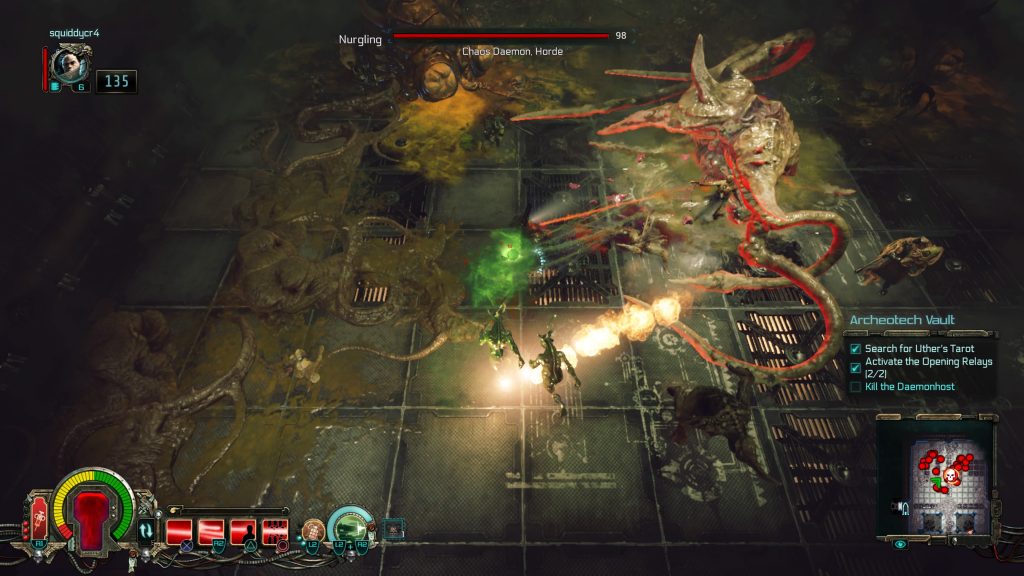 Five tutorial missions get you up and running.  You move around with the left stick while your attacks are mapped to four buttons.  These are based on the weapon or weapons you are carrying and you get two loadouts.  My main choice of character was the Crusader and I found that while it was best to play him with a two-handed laser rifle, I also found it handy to switch over to an alternate loadout which had a chainsword and a pistol just in case I got swamped.  However, I also had success with his flamethrower and other rifles with only his shotgun failing to prove its usefulness.

The L2 button is used for further gadgetry such as grenades, mines, forcefields and digital enhancers that increase things like your critical attack percentage while squeezing both the triggers will set off another ability such as the Crusader’s turrets or the Assassin’s teleport.  There is a lot of build diversity going on and you can find yourself messing around with different builds for ages.

Thankfully, Martyr is pretty forgiving.  I remember ending up with an unusable build in Sacred 2 and having no way to fix it so it’s nice to see that this game lets you undo changes and reset your skills.  On top of that the basic game really isn’t that difficult.  For a while I was making unstoppable progress as if I was barely taking damage at all but eventually the game starts to put up a fight.  Multiple easy enemies will swarm you as a heavily armoured cultist picks you off from distance.  Taking cover helps but only for a while as cover can be destroyed and your foes have an unerring knack of shotputting a grenade on top of your head if you get to comfortable. 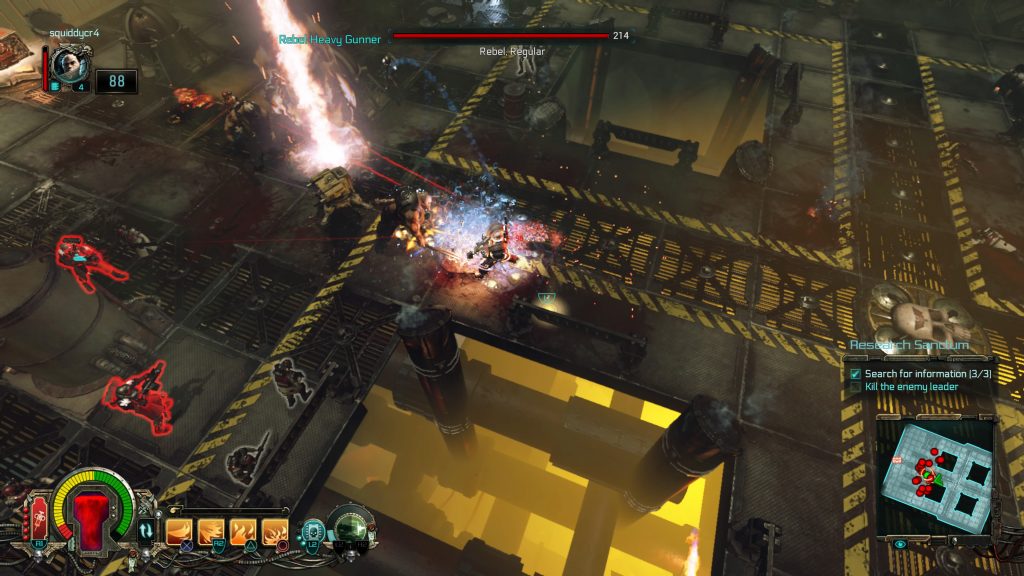 When the difficulty kicks in and you’re using all your skills to survive, Martyr is excellent.  Mass ambushes are my favourite moments with me using every tool I’ve got – grenades, turrets, melee weapons and crowd controlling ranged weapons – just to stay alive.  At these moments this really feels like Diablo but in a different setting and that’s no bad thing.   That said, sometimes I found myself just holding down one button while the auto-targeting system did the hard work for me.

The other thing I really like is that the game uses your command bridge as a hub to launch missions.  Unlike most RPGs this isn’t a big, sprawling open world.  You take missions which are small and relatively linear and then head back to base when you are done.  I want more of that.  Linear games are the best.  It keeps things focused and makes this one of those rare RPGs that you can drop in and out of.

The loot system is something that can make or break an RPG and thankfully the game gets it just about right.  Any loot you pick up can only be equipped at the end of each mission and that means less time faffing on the battlefield and more time killing heretics but when you do get into those post-mission gear sessions, it’s nice to compare stats and pick out what bits of equipment will make it into your next loadout.  It’s far from excessive and while the loot was what made Diablo 3, we’re glad that Martyr dials it back a little. 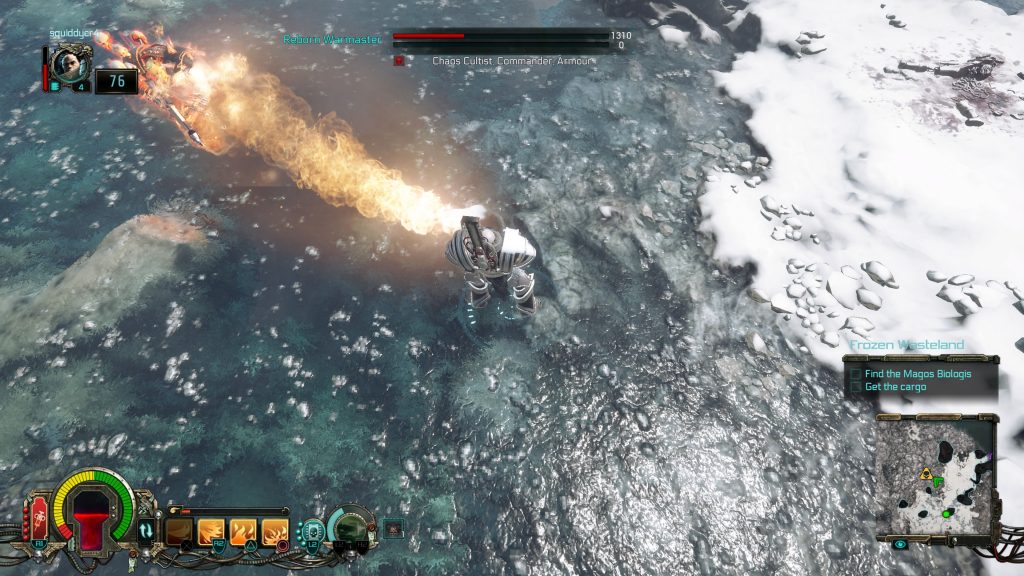 Well… kind of.  You see, after a while you’ll realise that the game still isn’t done feeding you new gameplay mechanics.  Before long you’ll realise that you can craft healing potions, scrap weapons for parts (rather than just sell them), create new guns and even fuse items together.  There’s a ton of depth and while hardcore RPG players will appreciate that, it does feel a bit like overkill.  This is a big game and one that really will take weeks to fully explore (and as such I’ll be looking to update the review if anything game-breaking presents itself later on).

The game also offers randomly generated missions, offline co-op and online play (co-op and PVP) too which is nice to see but can make the package feel a little overwhelming.  In the end Martyr feels like one of those games that you have to give a bit of exclusivity too.  You can’t juggle this and, say, No Man’s Sky.  Believe me, I tried.

The presentation on offer here is of a generally high standard.  The voice acting is all deep voices and plummy acting but it suits the setting well.  Radio conversations come through the DualShock speaker but that’s actually a good thing as it adds a little immersion.  Normally I’m quick to reach for the setting that turns that shit off but Martyr makes it work.  The sound effects in game make everything sound pretty dynamic.  There are usually plenty of explosions going on alongside the gunfire and it all sounds pretty decent. 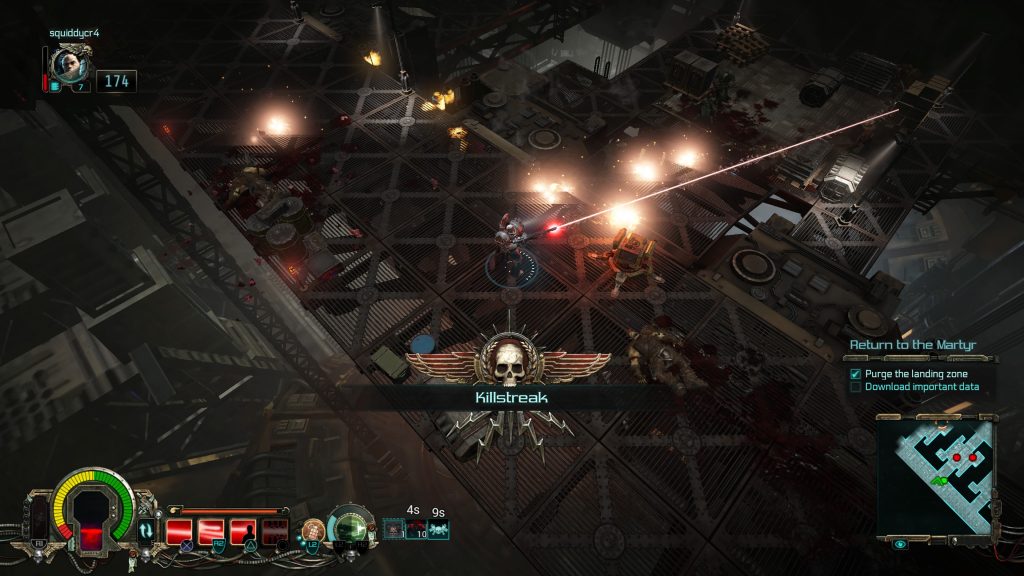 Visually, the 40K world has always looked pretty grim and that’s the case here but the graphics are nicely detailed.  Oddly the menu offers a choice of resolutions from 1080 to 1440.  I went with the later and it looked nice and the performance was solid but it did go on to create a problem where a certain level crashed whenever I tried to load it.  Dropping the quality down fixed it and I was able to go back to 1440 afterwards but it’s something to watch out for.

Targeted enemies have that now ever-present Diablo red outline on them but the enemy designs are pretty good (they should be, there is after all a whole franchise based around these characters) and they are reasonably well animated although not to that Diablo III standard.  Overall, the action is well represented on the screen with plenty of laser fire, explosions and big beasts to keep you from noticing how grey and dreary the backdrops are and the randomly generated nature of the levels means that nothing ever really stands out as being incredibly well designed.

So there you have it.  I may not be a Warhammer fan and I’m still a little intimidated by all the gameplay mechanics it offers but I really enjoyed Martyr and way more than I expected to and am continuing to do so.  It’s a solid ARPG which taps into my love of shooting things and my even stronger love of looting guns from dead people and while it’s not the greatest game technically-speaking there’s enough fun to be had here for regular people as well as your hardcore RPG types.  The promise of extra content in the future just sweetens the deal further.  This is good.  You still won’t catch me in a Games Workshop though.

Warhammer 40,000: Inquisitor - Martyr
8 Overall
Pros
+ Easy to get into
+ Loads of depth
+ Good presentation
+ Decently considered looting
+ Short levels
Cons
- Some of that depth may get ignored by most players
- Can get repetitive over long play sessions
- Has a lot of plot
Summary
This latest Warhammer title offers a ton of story for fans of the franchise and plenty of gameplay mechanics for experienced action RPG players. Thankfully, regular gamers can enjoy the Diablo-but-with-guns gameplay too.