This sequel to 2015’s Guns, Gore & Cannoli is four man Belgian dev crew Crazy Monkey Studios’ latest PSN release and follows on from its predecessor by offering up some fun and frantic run and gun shooting action.

Mobster Vinnie Cannoli returns once again as the lone survivor of the events of the first game where his neighbourhood, Thugtown, was the centre of zombie outbreak. The game starts with him tied to a chair some twenty years later at the hands of rival gangsters. 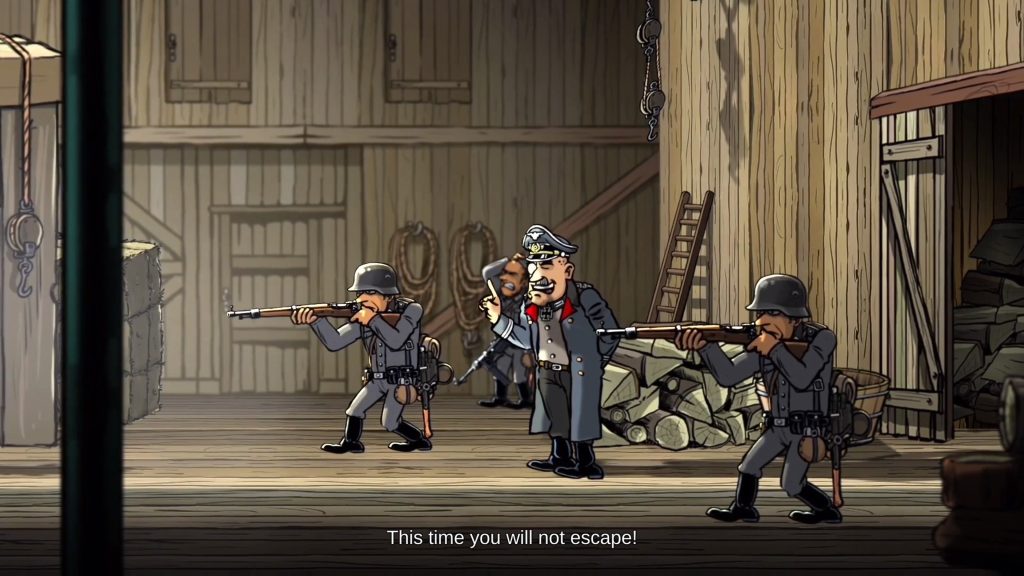 He breaks out and it’s from that point that gameplay starts. This is essentially a run and gun twin stick shooter. You run from left to right with the left stick and aim with the right stick. Jumping is assigned to

The game plays much like Metal Slug with a bit of Rolling Thunder. Enemies run towards you, mostly from the right but sometimes from the left as well as above and below and they’ll chase you around the screen until they get you or will attempt to gun you down from distance. 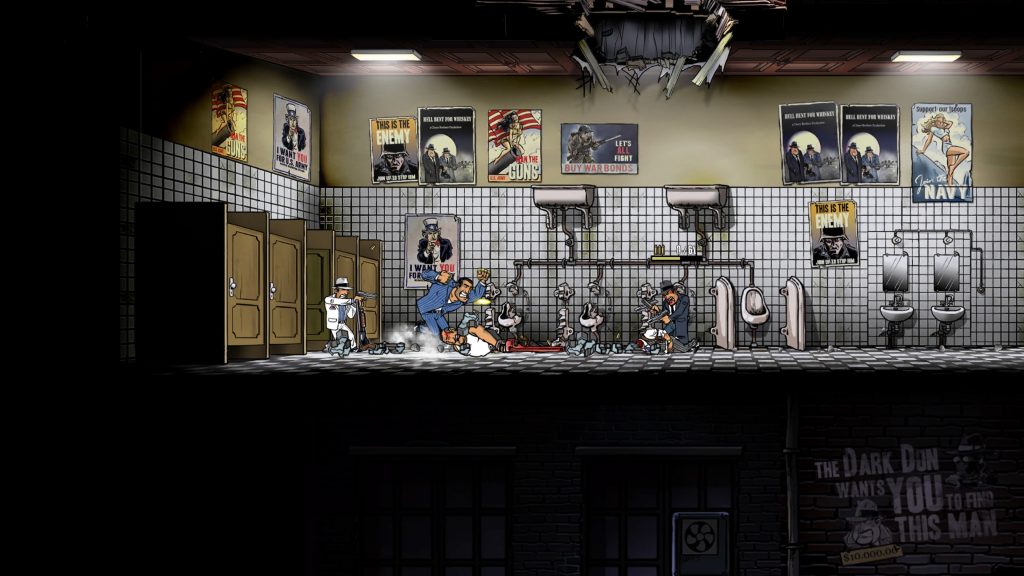 The levels are entirely linear with none of that Metroidvania nonsense slowing you down. Vinnie is very much a one-man army in this game and so there’s never really much of a requirement to retreat or sneak around.

As you progress you’ll find new weapons (accessable from a wheel menu). Everything from handguns, rifles, shotguns, flamethrowers, explosive weapons and a chainsaw are available and you can switch between all of these depending on ammo. Picking the right weapon for a scenario is definitely key to success, especially with the game’s few boss battles.

Guns, Gore & Cannoli 2 combines all out action with plenty of humour. Vinnie is your typical wiseguy cracking jokes and skulls as he goes about his business and the game has plenty of little jokes and funny moments in there for you to enjoy. This keeps things fresh which is good because the constant slaughter does come close to grating after a while. 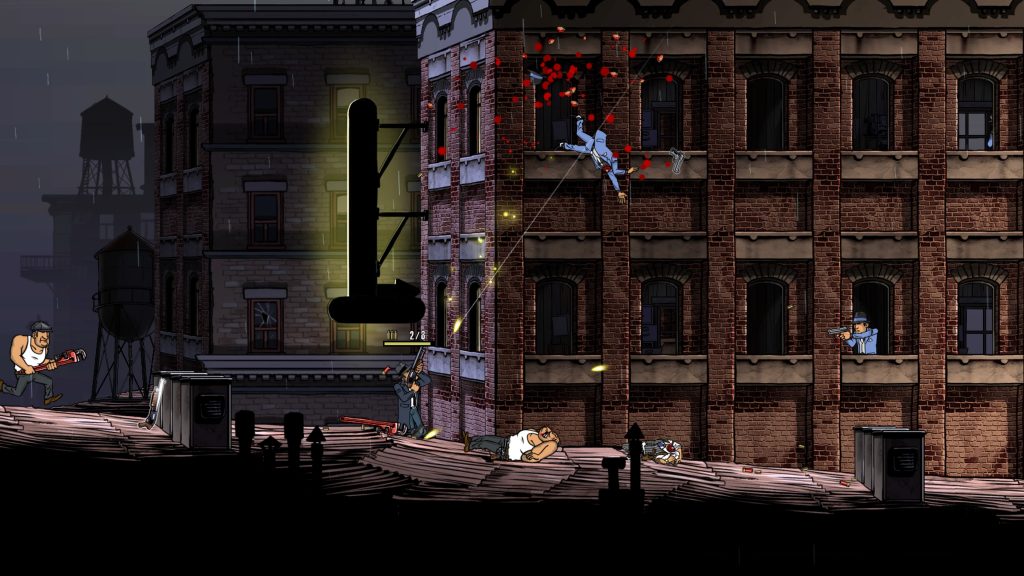 Despite the game’s cartoony visuals, there is a ton of violence here. Vinnie really takes no prisoners and has plenty of brutal and bloody ways to kill his enemies. Sure they may be zombies and worse, nazis but hearing them scream as they are blown to bits is definitely at odds with the charming hand-drawn visuals.

The game does look great though. It has all the character of something like Metal Slug but without the reduced pixel count. Everything moves slickly too and really helps the game to stand out against all the other run and gun shooters out there. The levels also are impressively well drawn and while areas can start to get repetitive, the game does a good job of changing up the setting before it gets too old. 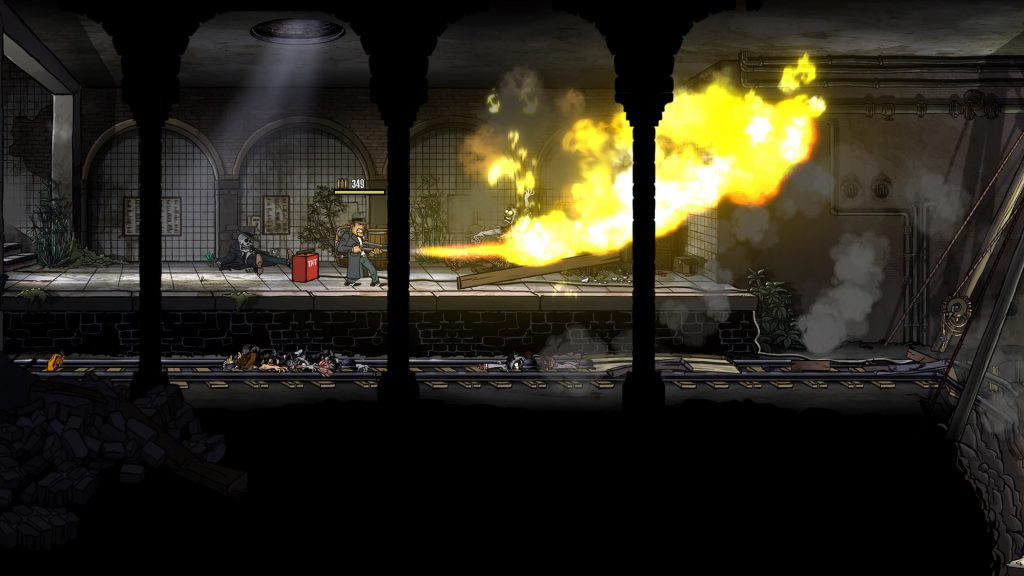 Guns, Gore & Cannoli 2 gets so much right. The controls are slick and give you enough manouevrability to make skillful play possible. The story is entertaining and not quite as cliched as it first appears. The use of 1940s jazz also adds to the charm (and helps distract you from the tortured screams of your enemies).

The difficulty is also pitched just right and curves upwards in just the right way. A couple of the boss battles gave us a bit of trouble but weren’t offensive and you can pretty much switch difficulty on the fly (it doesn’t penalise you in terms of trophies either).

In the end Guns, Gore & Cannoli 2 is a great way to spend a few hours if you’re a fan of the genre and is a game that is short enough that you’d be able to play it again, and entertaining enough that you’d want to.

Summary
Guns, Gore & Cannoli 2 is a beautifully crafted run and gun shooter that combines great visuals, exciting gameplay and some dumb but fun humour to create one of the most enjoyable shooters on PSN.