Factor 5 were a game studio with long and varied history behind them. Depending on your age, and videogame system of choice, you might remember their name being associated with scores of quality games. Most famously they teamed with LucasArts to make a great Indiana Jones platformer on the SNES and the Rogue Squadron trilogy of action flight sims on N64 and GameCube. Later on, they had games cancelled just before release or hamstrung by publishers demanding features nobody in their right mind would want – I’m looking to you Sixaxis, you janky-ass waste of gyroscopes – leading to their closure in 2007.  But before all that they made their name back in the 8 and 16-bit heyday of the early 90’s with Turrican. Whilst not their first game, Turrican‘s mix of platforming, shooting and exploration was so good it catapulted the small German developers into the big time and cemented the Turrican series as classic games still worth playing over three decades later.

Turrican Flashback is a compilation of four games from the Turrican series that, while missing a few notable titles (more on that later) show the series evolution from the action exploration gameplay of the original Turrican to the more linear arcade style action of later console games. Each game has its own plethora of emulation options with all the usual features you’d expect like 4:3 or 16:9 display, scan-line filters, quick saves or loads and a rewind feature to backtrack through your gameplay to avoid mistakes you make, like say… I don’t know… accidentally jump off a platform into a spike pit because of wonky controls. While these options help to make the Turrican experience more palatable for contemporary players, be warned trophy hunters! If you want that platinum or any trophies for that matter be prepared to play with these aids turned off and experience it just as we did back in the day. 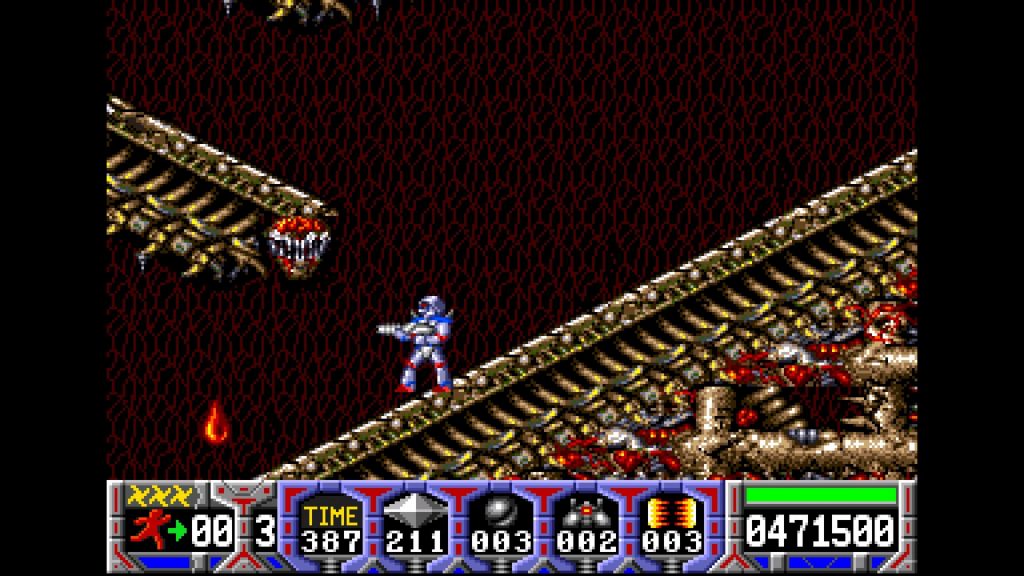 One detriment is the lack of supplemental material that we’ve come to expect from retro collections. There’s no artwork, no music jukebox.  In fact no information about the games themselves to be found. This is disappointing to anyone with a love of the series, like myself, as I’m sure Manfred Trenz or Chris Huelsbeck or any of the founding members of Factor 5 would have fascinating insights into the series.

The first game in the collection is the original Turrican (natch) from 1990, specifically the 16-bit version. It’s a mix of platforming, exploration and shooting with a varied arsenal of weaponry, from your starting single shot blaster that can be upgraded with collectable pickups to become a multi-shot spread or a single, focused laser beam. You can also fire grenades to damage anything on screen (provided the grenade actually hits something), drop mines to destroy ground based enemies, fire your lightning gun that you can rotate around the screen, shoot power lines that travel horizontally or morph into Turrican‘s gyroscope. The gyroscope is a constantly moving bladed wheel that makes you invulnerable while in use but limits your movement, making it ideal to dodge attacks, cover ground quickly or cower in the corner during some of the more tricky boss fights. 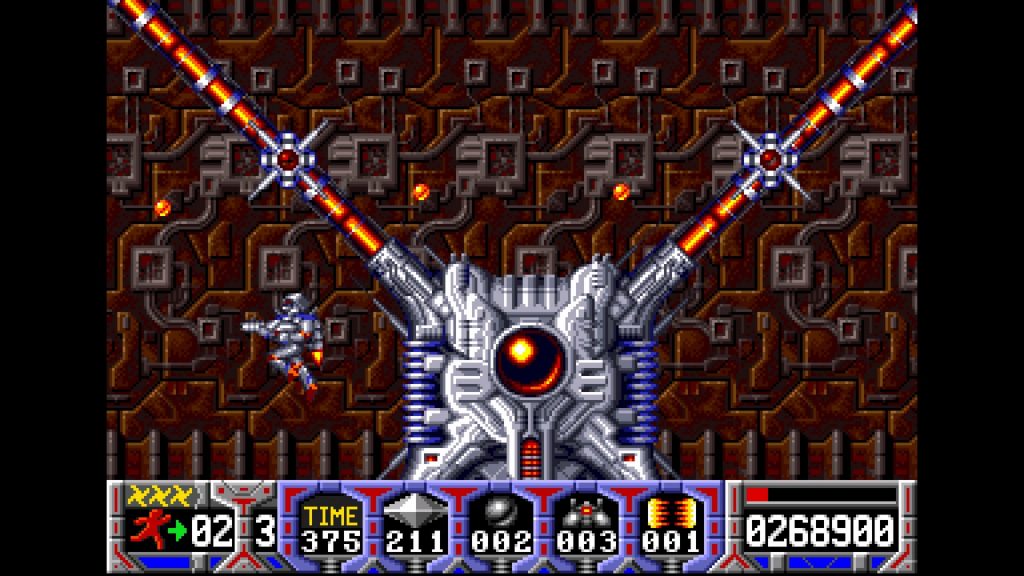 Having become accustomed to contemporary games making the start of any game a basic tutorial, Turrican (and to an extent most retro games) has none of this nannying. With no extemporaneous setup or hand-holding it just drops you at the start of the level and leaves it to you to find your way through it. You can plough ever forward, blasting away looking for the exit as fast as possible before the timer costs you another life. Perhaps you’ll take your time searching for the hidden item blocks that contain extra ammo for your weapons, collect the diamonds scattered about the level or even seek out a few extra lives because, oh boy, you’ll need them!

Turrican is, by modern standards, ruthlessly harsh when it wants to be. Any enemy, even those vanquished by you with a single shot, has the potential to drain your health bar in a few scant seconds. Death pits and energy sapping spikes are frequent and the bosses can reduce you to your constituent atoms with a single blast. The addition of save states and rewind can help ease new players into the chaos so consider yourself warned because despite my dire warnings it can be pad smashingly frustrating and that’s before you even consider the problems with the controls. 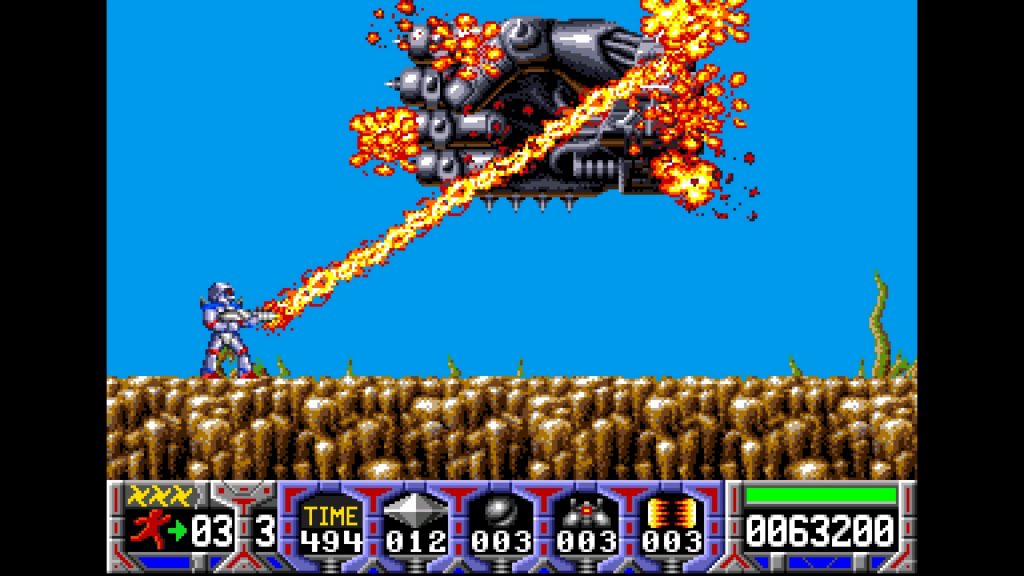 As I alluded to earlier, this version of Turrican has what I would describe as ‘wonky’ controls. In the ’90s, the game was originally designed to be played on a single fire button joystick with the jumping controls handled by simply pressing up of the joystick. Here jumping is assigned to a button on your pad, no big thing you might think as that’s been normal for even longer than Turrican has been around. But here the jump has an ever so slight delay (probably a few frames, I don’t know I’m not some Digital Foundry geek) making some of the platforming sections feel like I was playing a Soulsborne game. Seriously, I lost more lives to a relatively simple series of jumps in level 1-2 than I did fighting most of the bosses. Now I know this wasn’t a problem with the original game as I’ve been happily playing it on multiple formats since it was released back in 1990. In Turrican Flashback some combination of the emulation or input code along with having to use a modern control pad has made one my favourite games of all time feel like trying to steer a traction engine with tweezers.

However, despite the new control woes Turrican is still an amazing game that’s worth your time. The gameplay although harsh still holds up as does the soundtrack and its non-stop action, particularly in the couple of vertically scrolling shooting sections where Turrican takes its ‘shoot or die’ motto to heart.

Next up is the first sequel, Turrican II: The Final Fight (spoiler: it wasn’t) and like Turrican before it is a mix of action, exploration and platforming based on the original 16-bit release. This is a much tighter package overall compared to the original. Turrican‘s superfluous weapons have been dropped in favour of a smart bomb style attack you can use once per life and a collectable weapon that bounces and ricochets around – very useful in tight areas. The level design is likewise tighter, giving you space to explore for extra goodies as before without becoming sprawling or too samey. 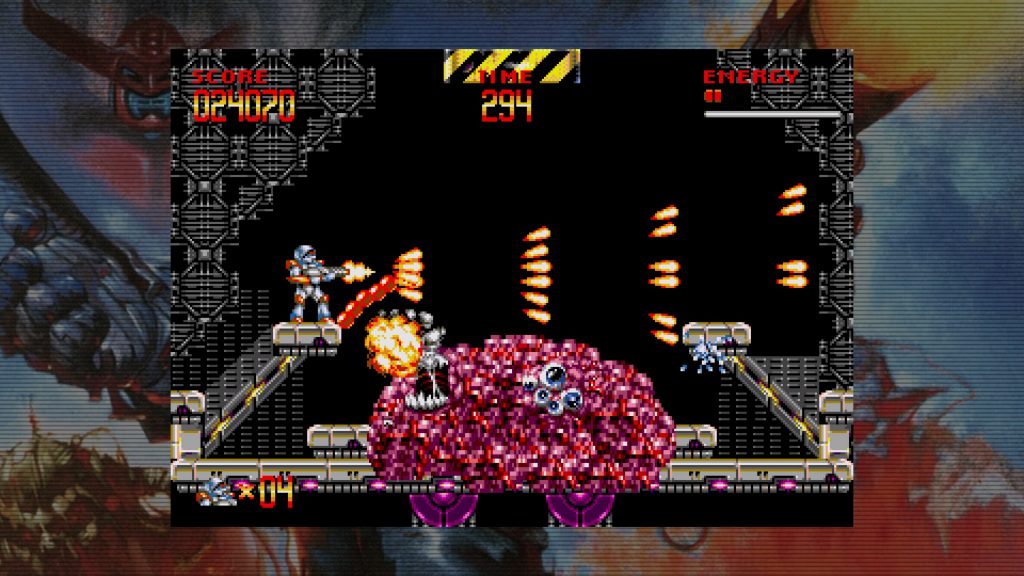 The first game’s vertically scrolling sections have been replaced by horizontally scrolling stages that play like a combination of R-Type and Air Buster or as a tribute to Factor 5’s own Katakis shoot ’em up. Also gone are the control woes that plagued Turrican. It might be something different in the emulation code but it feels and plays more or less like it did originally, which is to say brilliantly!

Next is Mega Turrican which was released for the Sega MegaDrive/Genesis in 1993 and is essentially Turrican 3 albeit with a slightly different name. It’s here that the Turrican games started to make what could be politely described as some *ahem* questionable design choices. The platforming is scaled down, exploration almost completely removed while the arcade action was dialled up to eleven. Gone is Turrican‘s signature lightning gun replaced by a fixed direction grapple to help swing around.

The aesthetics changed too with the traditional western sci-fi style art replaced by a more anime/manga style. The music is just as good though with some of the best tunes in the series found here, particularly the epic introduction music. Whether this is an improvement or detriment to the series is a matter of personal opinion. Personally, I prefer the first two games but I know just as many people who prefer the later console entries, so to each their own. 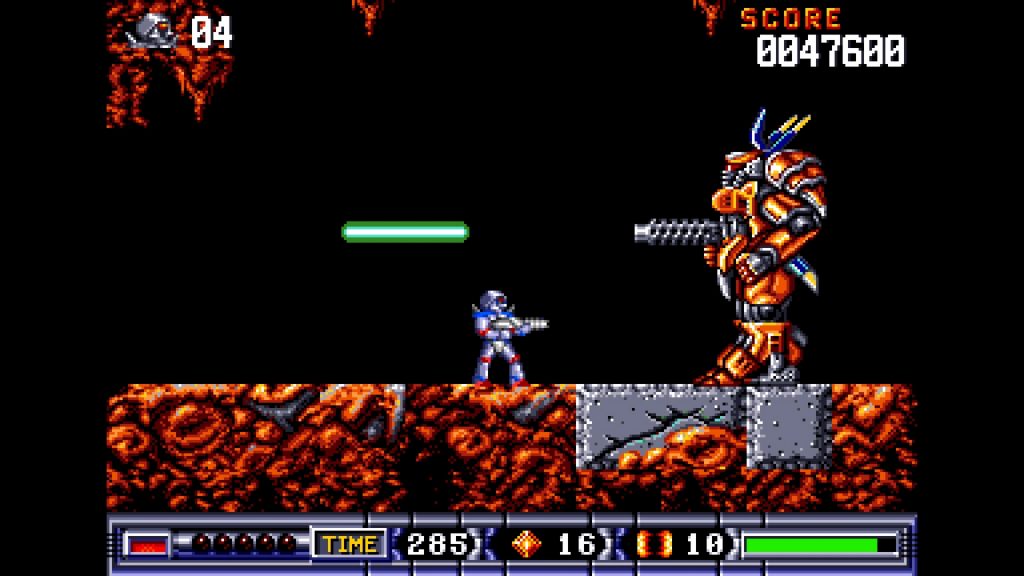 The last entry is Super Turrican, originally released for the SNES in 1993. Despite being a different game it shares a lot of the same DNA as Mega Turrican, with a focus on arcade shooting rather than platforming and exploration. Here the lightning gun is usurped by a multidirectional freeze beam that handles like the original lightning gun but doesn’t damage enemies directly. Being a SNES game it has the obligatory Mode 7 graphical flourishes but is somewhat shorter than the other entries lending itself more to speed running than the rest of the games. Apart from that it’s business as usual, great music, great shooting, interesting stages and bosses yadda, yadda, yadda…

So, should you buy it? If you’ve an interest in retro gaming, or if you’re an old fart like me who was around for the originals, it’s a great purchase. Other gamers with a love of the current wave of new but retro style games like The Messenger or Blazing Chrome will likewise find there’s enough here to justify a purchase.

Despite the control problems with the original game, there’s more than enough raw gameplay here to make it worth your time and money. If you’ve not tried it before I’d still recommend it as the gameplay aids and cheat options still keep it a fun experience for first timers despite its initial difficulty. Sure, I could complain about the lack of the Commodore 64 games being represented, as they play just as well if not better than the 16-bit games. I could likewise complain about the lack of the NES Turrican or the black sheep of the Turrican family, the Universal Soldier conversion of Turrican II or any other versions for that matter.

Factor 5 wanted to give us a Turrican collection and, for better or worse, that’s what they did. Every game included in this collection could easily be released individually and still get a recommendation but as a collection it’s not one you’ll want to miss.

Guest review by Mark Newton.  Retro gamer, collector, mancave builder and Turrican enthusiast.  Check him out on Twitter at @calesworkshop.

Turrican Flashback
8 Overall
Pros
+ Four classic games that each play great in their own way
+ Good options for new players
+ Some of the best videogame tunes ever recorded
Cons
- Control problems with the original Turrican
- Lack of supplemental material and 8-bit entries
Summary
Turrican Collection is a great compilation of four classic run and gun games that, despite their age and difficulty, still hold up to contemporary releases.